Four-year-old Hazel Flinn was giving her best three feet when she set the netball world alight. Her lipstick-smeared face, framed by blonde ringlets and hidden behind thick glasses was tensed with concentration. Her arms expertly (and permanently) raised, her GK bib stuck upside down to her oversized dress, and the hero of her outfit – a pair of red sparkly heels and spotty stockings – culminated to produce one of the most adorable images ever taken on a netball court.

Take a closer look at the photo, and the poetry of grassroots netball begins to write itself: parents rugged up and clasping coffee cups in the background, a goal shooter looking down at those sparkly shoes and wishing she had a pair of her own – the princess had been out-princessed.

But just out of shot, Hazel’s mother (and photographer) Katherine expertly crops out the netball parents drinking Mother’s Day refreshments.

“The Under 12s mums ordered bacon and eggs and got the dads to cook them up for breakfast,” Katherine said.

“And my friend and I thought that wasn’t enough, so we bought a quite a few bottles of champagne and orange juice and were handing out mimosas!” 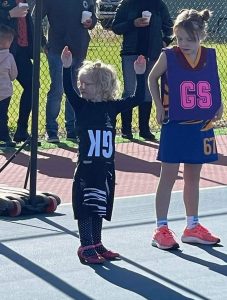 Hazel living her best life out on the netball court – the photo that we all fell in love with – standing alongside goal shooter Edie Ward. Image Katherine Flinn

So while Katherine was tasked with pouring the morning beverages (into champagne glasses, and when they ran out, coffee cups), other parents were working behind the scenes to set up a Net Set Go scratch match. Hazel was called from the playground straight onto the court – stockings, ‘click clacks’ and all, while best friend Peggy debuted in some farm boots. In sync with netball’s classic ‘look good, feel good, play good’ mantra, the pair did each other’s makeup and jumped on court before their mothers were even aware.

“So we were already laughing at the mimosas,” Katherine said. “And (when I saw her) I was just wetting myself standing there taking photos of her!”

“She had no idea what she was doing. She played like someone who has spent her lifetime on the sidelines and never watched a game.”

Despite it all, Hazel followed instructions to a tee. The birthday girl was told to put her arms up, so kept them pointed skywards for the entire game, even sacrificing two netballs to the head to do so. 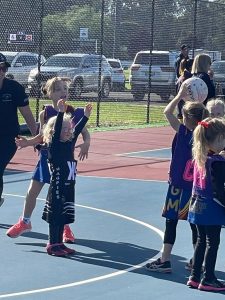 Unlike some defenders, Hazel has a good grasp of the three feet rule. Image Katherine Flinn

Katherine snapped a photo of her, which was shared on the club’s Facebook page and then snatched up by AFL Riverina. That’s where I found it and shared on Twitter, sparking a chain reaction of netball lovers, elite athletes and Super Netball teams gushing over Hazel.

“It just went bananas,” Katherine said. “All of them are the most beautiful comments. Everyone is just being lovely humans.”

In a matter of days, the Melbourne Vixens and Puma sent training kits to the two clubs (including runners for Hazel). While Vixens co-captain Kate Moloney sent her a video message, and a netball clinic and free tickets to a Melbourne home game were booked in.

One of the brains behind the plan was James Ward who is a sports marketer with Puma, and the father of Edie, the observant GS standing in shot next to Hazel.

“[It’s exciting] for these clubs to get that calibre of people to come,” James said. “When especially if they do come, they come to Wagga. They don’t come to The Rock or Ganmain…”

The Rock-Yerong Creek Football Netball Club is situated 32 kilometres south-west of Wagga Wagga and is the epitome of grassroots netball in rural Australia.

“Most people who live in the area play for the club not because they initially love the sport, but because it’s our community club,” Katherine said. “But then they develop a love for the sport.”

“We just have some amazing families that dedicate all their time to making it a great club.” 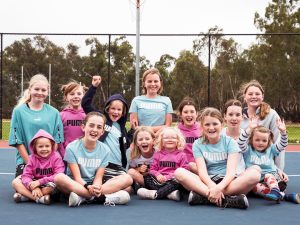 Puma reached out to Hazel Flinn and her netball club. Image Sam Dennis.

The community spirit is a drawcard that has families from the city of Wagga signing up to play… along with the “good old country hospitality” provided on that Mother’s Day morning.

As for Hazel, her mum hopes she can continue playing netball, but perhaps not in the assumed role of a princess shooter.

“I think she’ll come in on the wing somewhere, and be confused for some time.”

“It’s all a bit of fun. Not everyone is going to play for the Diamonds. You have to enjoy it as a kid to want to do it as an adult for fun and fitness, and to keep your community spirit up.”

While Hazel made her mark in her birthday click clacks, she’s expected to don the heels off the court for years to come.

“She’s got it covered. She’s a heel natural from the start … I think the best comment on social media said, ‘it’s Hazel’s world, we’re just living in it’.” 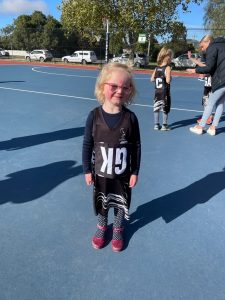 Hazel getting ready to take the court. Image Katherine Flinn.