The Games experience got off to a rocky start for Malawi as they arrived in Birmingham without their dresses. In an official press release from Malawi Netball they confirmed that the delivery of their game day kits from two suppliers was held up in China, and that they would not arrive before the side took the courts on Day 2 of competition. Fortunately, UK uniform supplier, Into Sport came to the rescue, providing each athlete with two dresses.

Australian reserve athlete, Donnell Wallam has answered the question on many fans’ lips: why aren’t the reserves staying in Birmingham in case they are needed throughout the Games? In a social media group discussion, Wallam advised that, “Once the squad of 12 is submitted reserves can’t be used.” Many national coaches were hoping that as the world still navigates Covid, the rules would be adjusted to allow for reserves to compete if one of their original 12 succumbed to the illness.

While umpires are always mic’d up during the games, they can be tricky to hear over the crowd. Not in Birmingham! Umpire’s calls are clearly audible to all, which is particularly important for those athletes for whom English is a second language. The umpiring was reasonably consistent across the first day of play, and a number of cautions and warnings were handed out as they set the standard for what would and wouldn’t be tolerated.

A massive congratulations to England’s Geva Mentor, who read the oath at the Opening Ceremony, on behalf of all athletes. Attending her 6th Commonwealth Games, it was a fitting tribute for one of our sport’s most endearing and enduring athletes and ambassadors. 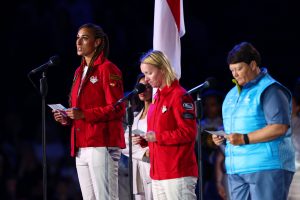 Blackman for Barbados – “I’m so excited. I am proud of myself and happy to carry my country’s flag. I got the news the night of my grandmother’s birthday, it was awesome. Everyone back home will be watching me, including my 15-year-old daughter, who is glued to the TV. They feel happy and proud.”

Msomi for SA – “”Firstly, I thought it was a joke, but in a minute or so it started to kick in. It’s such an honour. I’m really humbled.” 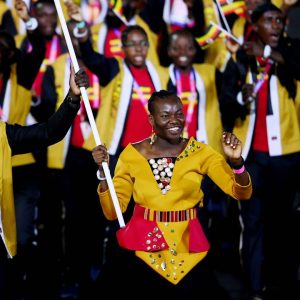 Proscovia Peace had the honour of being Uganda’s flag bearer. Image: Uganda Netball

Jo Harten threw a scare through fans pre-Games, as she was spotted out and about with her knee heavily strapped. And if she looked slightly proppy at times during England’s first game, her movement in the goal circle was still on point.

Barbados stalwart, Shonette Azore-Bruce sustained a suspected ankle injury in the early stages of the second quarter of their match against Australia. Injury time had to be extended as she was assessed, but she later returned to the court for the start of the third term. 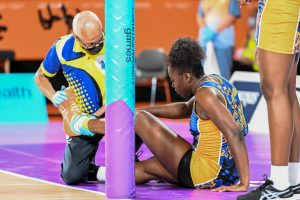 Shonette Azure-Bruce left the court for treatment but returned later in the match. Image: Sue McKay

Paige Hadley was rested from Australia’s match due to a leg niggle. While the injury isn’t specified further, coach Stacey Marinkovich is confident she will be back out on court in the next few days.

PLAYERS OF THE DAY

Rapidly becoming one of the most influential players on the world’s stage, Eleanor Cardwell (England) was the focus of all eyes, following the announcement of her departure from Manchester Thunder and signing by the Adelaide Thunderbirds. The formidable goal shooter/goal attack didn’t disappoint, sinking 30/30 in half a game of netball, and proving difficult for the defenders to move around.

Gretel Bueta also flexed her muscles for Australia, with her athleticism and strength in the air proving a challenge for her opponents as she sank 44/48 at 96%. 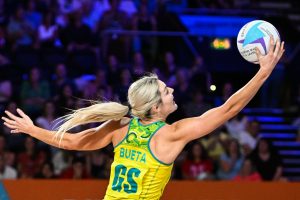 Gretel Bueta pulls in a ball for Australia on Day 1. Image Sue McKay/Kick It To Me Photography

To continue with the shooting theme, Te Paea Selby Rickit justified her selection with a strong outing that included shooting 25/27 (93%) in three quarters of a match, pulling in four rebounds for no mistakes.

English pundits rate Layla Gusgoth as the best goal defence in the world, but Latanya Wilson continues to throw down the gauntlet for the title. Across three quarters for Jamaica, she came away with six gains, seven intercepts and two rebounds, as she starred in the defensive

The team has been out and about chatting to netty families, fans and familiar faces. Catch all the highlights with the Birmingham Scoop Vlog.

If England blew out the cobwebs against a competitive Trinidad & Tobago in the first quarter, it was in the second and third quarters that they showed their championship credentials. Coach Jess Thirlby rotated her entire squad of 12 through a range of positions, showing the side’s class and depth. Full court defence was a feature of the Rose’s game play, with eight of their 12 coming up with gains. If Geva Mentor picked off the most ball (5 gains), she was ably supported by Layla Gusgoth and Laura Malcolm (4), Stacey Francis-Bayman and Jade Clarke (3).

While the midcourters transitioned the ball smoothly through court, the Roses’ shooters spilled some of it over the baseline at times. However El Cardwell was a standout in her 30 minutes on court, ending with 30/30.

Trinidad & Tobago were clearly missing the injured Sam Wallace and Khalifa McCollin, and after the first few minutes, struggled against their opposition. Captain Shaquanda Greene was a standout with nine gains, and well supported by the aerial ability of goal defence Aniecia Baptiste. However, the ball was lost in transition far too many times to threaten the current gold medallists, who recorded a record score against Trinidad & Tobago. 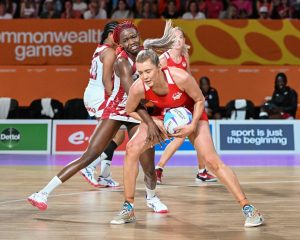 Helen Housby being challenged by Aniecia Baptiste. Image Sue McKay/Kick It To Me Photography 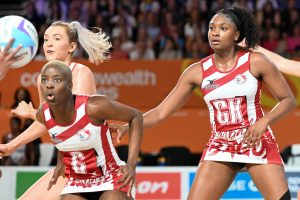 Shaquanda Greene and Oprah Douglas had eyes for the ball. Image Sue McKay/Kick It To Me Photography 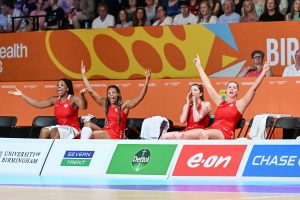 We like it! England’s bench reacts to a goal. Image Sue McKay/Kick It To Me Photography 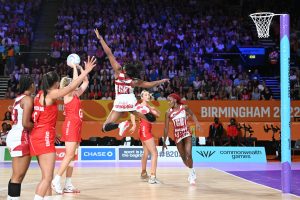 Some serious air for Shaquanda Greene as she jumps over Jo Harten’s shot. Image Sue McKay/Kick It To Me Photography

Australia dominated Barbados in their opening match. It was the 6th time the two sides have met at a Commonwealth Games with Australia securing their highest win margin in this match up. Australia began the match with a tried and tested starting 7 who had fluidity right the way down the court. However, there were patches of complacency in the opening quarter as Barbados dominated the defensive rebounds – until veteran Shonette Azure-Bruce left the court injured.

Both sides took the opportunity to run 11 of their 12 athletes and test a range of combinations. Barbados utilised their versatile circle players switching them from defence to attack, but their inaccuracy, shooting at 58%, was costly.

Australia looked smooth in the first half, with bookends Gretel Bueta and Courtney Bruce particularly influential. However, it took athletes a while to adjust to their third quarter changes and play became messier. However, a few attacking adjustments saw their slick ball movement corrected in the fourth. 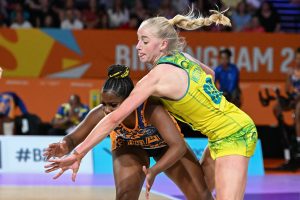 Jo Weston uses a sneaky hand in defence. Image Sue McKay/Kick It To Me Photography 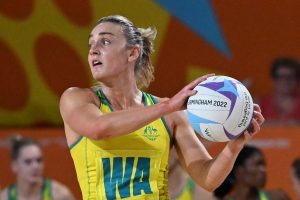 Captain Liz Watson in her first hit out at the Commonwealth Games 2022. Image Sue McKay/Kick It To Me Photography 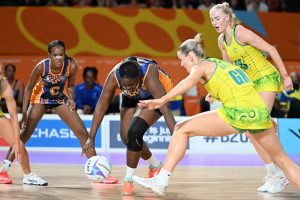 Courtney Bruce aims to intercept a ball intended for Barbados’ Shonica Wharton. Image Sue McKay/Kick It To Me Photography 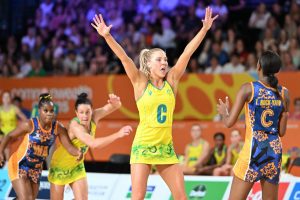 During a rusty opening term, the two teams surprisingly ran almost goal for goal as Georgia Rowe starred under the goal post for Wales. However, the injection of an industrious Shanice Beckford at goal attack, and the defensively lethal Latanya Wilson at goal defence, saw Jamaica take a healthy lead in the second term.

As has been the case for the Adelaide Thunderbirds, the pairing of Wilson and Shamera Sterling started to create numerous opportunities for the Sunshine Girls, while at the other end, Jhaniele Fowler was unstoppable. Khadijah Williams was undisciplined at times at wing attack, and was later replaced by Adean Thomas.

Bethan Dyke, still on the comeback trail from a knee injury, was both industrious and precise at wing attack and centre for Wales, while Betsy Creak came up with five pickups.

Jamaica extended their lead across the match, but with clearly defined top starting seven, key to their fortunes will be managing their rotations.

A shooting percentage of just 40% in the first quarter put Northern Ireland on the back foot from the start of the match. Goal attack Michelle Magee was particularly shaky, missing two of her four shots, and giving away six contacts and three turnovers. Caroline O’Hanlon was her usual industrious self, but the Warriors found it particularly difficult not only to hold onto ball, but to turn it over in defence, despite the best efforts of Niamh Cooper and Fi Toner.

Northern Ireland finished the match with a disappointingly low 56% accuracy rate, as New Zealand defenders applied plenty of pressure over the shot. Sulu Fitzpatrick and Kelly Jury came up with six gains each, while Kate Heffernen slotted seamlessly into both wing defence and centre.

Silver Ferns’ coach Noeline Taurua kept fans guessing about her top line, making multiple changes across the match. Kelly Jury impressed at keeper, while Grace Nweke showed few signs of the nerves that have plagued her at international level during her first few test caps. It was a different matter for the experienced Bailey Mes, who despite coming up with five rebounds and two pickups, was only able to shoot 5 goals at 38%. 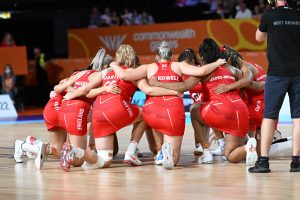 England take a knee before the opening match of the tournament. Image Sue McKay/Kick It To Me Photography

To keep up to date with all the scores, stats, points tables, and schedule for upcoming matches, check out our Draw & Results page