In good news for the health of world netball, Jamaica’s first-ever victory over Australia at the Commonwealth Games, and just their sixth since 1963, will see them take top spot in Pool A, and face off against New Zealand for a place in the gold medal match.

For a team that has previously lost confidence if facing a late match deficit, Jamaica piled pressure on Australia across the match. Converting 92% of their centre passes in the final quarter, compared to Australia’s miserable 62% was crucial in coming back from a six goals down, to win by two**.

Assistant coach Rob Wright has played a crucial role in building consistency, and stated post match, “Self belief is pretty powerful. They (players) believe that if they are sticking to what we wanted to do, we can score, and if we keep scoring we put pressure on the other team.

“We have been guilty of dropping our heads in the past, and we’ve been working hard to improve that.”

Jamaica’s occasionally maligned midcourt still gave away a few too many turnovers and will look to reduce that, but with Nicole Dixon-Rochester providing 34 circle feeds, and Shanice Beckford picking up 28 centre pass receives, more work will need to be done against them in the finals. Jodi-Ann Ward was also crafty at wing defence, picking up five circle edge intercepts

For Australia, the attacking nous of Paige Hadley, who is still out with a calf injury, was seriously missed, while Gretel Bueta came off her holds too early, creating a level of congestion in the circle. The Australian midcourt also found it challenging to slow Jamaica, who had a deadly 95% rate success rate to goal when feeding from the circle edge**. 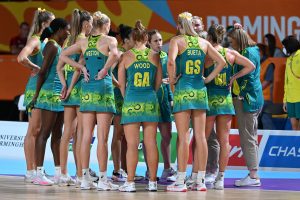 Australia will need to pick up the pieces quickly. Image Sue McKay/Kick It To Me Photography 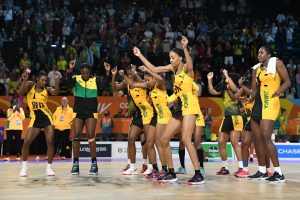 A full house watched the final match on Thursday, with England taking on New Zealand. The home nation jumped out to a stunning 15-8 goal lead after the first quarter, but the Silver Ferns pulled it back by half time, with just one goal separating the two sides. From that point on, England again slowly but surely pulled away to record a 10 goal victory.

Grace Nweke’s inexperience showed, as she recorded 23/29 (79%) across 45 minutes, but gave away five turnovers. While Geva Mentor couldn’t challenge all of the high balls, she pounced on anything loose, forced Nweke away from her preferred position under the post, and finished with four gains.

Nat Metcalf led from the front, with 46 feeds, 21 centre pass receives and 4 pickups, while Imogen Alison made the play of the tournament in deflecting and chasing down a ball at full speed.

It was an incredible effort by the Silver Ferns, who are missing numerous stars, but they will have to lift considerably to challenge the might of Jamaica, while England will come up against a wounded Australia. 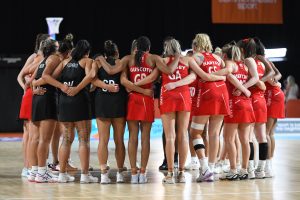 Post match huddle. Image Sue McKay/Kick It To Me Photography

South Africa started in the pool of death, and had to defeat either Australia and/or Jamaica to make their way into the medal matches. Missing a number of players through maternity leave, injury and retirement, it was a step too far for one of the world’s most rapidly improving nations. However, a strong victory over Scotland secured their third placing in Pool A, and they will match up against the ever-improving Uganda for 5th or 6th.

With height at both ends, and speed through the middle, South Africa should be far too strong for their African rivals, but a team with shooting stars like Mary Cholhok and Proscovia Peace can’t be underestimated. However, South Africa will hope for a strong performance ahead of staging next year’s Netball World Cup, and the continued growth of Africa’s number one women’s sport. 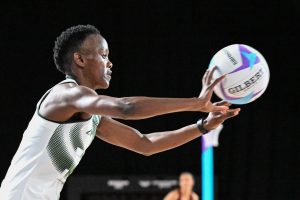 Captain Bongiwe Msomi warming up for South Africa. Image Sue McKay/Kick It To Me Photography 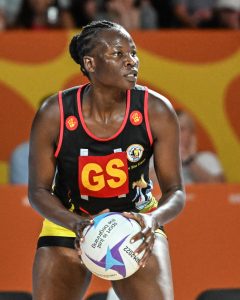 Proscovia Peace looking for an outlet pass. Image Sue McKay/Kick It To Me Photography

Wales defeat of Barbados sees them finish 4th in Pool A, and they will play off against Malawi in the 7th v 8th final. Wales has been one of the feel good stories of the tournament. After missing qualification for the 2019 Netball World Cup, the Dragons have been on a mission to improve both their standards and their world ranking. With many of their players contracted to VNSL clubs, particularly the Celtic Dragons, the future looks bright for the small nation. Their coach, Sara Moore, said, “We’re on a journey.

“There are little wins along the way for us, and that was a game we had to win today if we wanted to get closer to where we want to be by the end of the tournament.”

However, Malawi will be stinging after their loss to Uganda in pool play, and will want to finish on par with their world ranking of 7th. With experience in Joyce Mvula, Mwai Kumwenda and Towera Vinkhumbo, it will be up to the midcourt to reliably connect their bookends. 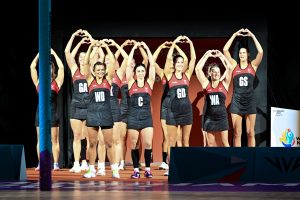 After missing the 2019 NWC, Wales were determined to have a good outing against some of their closest rivals. Image Sue McKay/Kick It To Me Photography 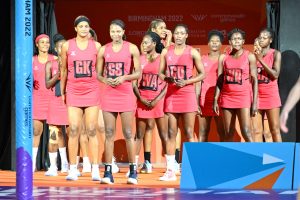 Malawi prepare to enter the court. Image Sue McKay/Kick It To Me Photography.

Northern Ireland’s win over Trinidad & Tobago leaves them 5th in Pool B, and facing a clash against close neighbours and rivals Scotland for 9th and 10th place. At both the 2018 Commonwealth Games and 2019 Netball World Cup, Scotland finished a place behind Northern Ireland, and will be looking to reverse that result.

With more of their squad playing in the VNSL and two incredibly tactical coaches in Tamsin Greenway and Sara Francis-Bayman, Scotland will like their chances, but will need their inexperienced team to step up. The squad have been rotated throughout the tournament, so Greenway could still spring some surprises with her starting seven.

Working in Northern Ireland’s favour is their gritty, never-say-die attitude, while a number of their players have international experience at previous pinnacle events. Led by captain Caroline O’Hanlon, who rarely has a bad game, athletes such as Fi Toner, Emma and Michelle Magee have been in strong form in Birmingham. 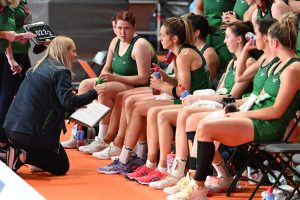 The Northern Ireland team listen to coach Elaine Rice at three quarter time. Image Sue McKay/Kick It To Me Photography. 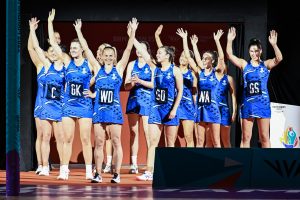 Scotland enter the court. Image Sue McKay/Kick It To Me Photography

As predicted, Barbados will face Trinidad & Tobago in the 11th v 12th match, after disappointing tournaments for both Caribbean nations. However, they’ve both been significantly impacted by Covid, with far less international match practice than any of the other nations, while the latter are also missing superstar shooter Sam Wallace (ACL recovery) and Khalifa McCollin. After finishing 9th at the most recent World Cup, it’s a particularly tough outcome for Trinidad & Tobago.

With netball a part-time sport in both countries, it’s challenging for either country to make headway against the top ranked nations, and it’s been heartbreaking for both players and fans to see such heavy losses inflicted this week. The world of netball has work to do in supporting these athletes. 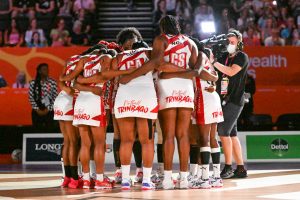 Trinidad & Tobago. Image Sue McKay/Kick It To Me Photography 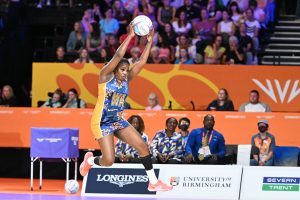 Barbados in action at the Commonwealth Games. Image Sue McKay/Kick It To Me Photography