With just 45 days until the Commonwealth Games, selection is finished, emotional phone calls made, and the Australian netball team revealed today. Stacey Marinkovich spoke exclusively to Jenny Sinclair about the 12 players and three training partners who will travel to Birmingham, and answers some of the tough questions surrounding the announcement.

What happens after the announcement?

Players will have a week’s break after their last match to ‘revitalise and have some time to themselves’ according to Marinkovich. They will join the team camp in Perth, starting a week after the grand final, before flying to Manchester for a further camp, and onto the Athletes Village in Birmingham.

The process allows for a period of training and partial acclimatisation in Perth, with its time and weather difference from the east coast, a direct flight to London, and further training and match play in England.

Gretel Bueta’s and Ash Brazill’s young families will form part of the travelling party, although will split off from the athletes when they arrive in Birmingham. Marinkovich said, “We will get the balance right during the Games with family time, but the players will be in performance mode there.

“We experienced travelling with Bobby at the Quad Series, it worked really well, and everyone is very comfortable with the families there.”

News of the team broke before the official announcement. What are your thoughts on that?

“It’s disappointing to have it released early because it’s been a very long build up for players to have their moment, and for the sake of a day, it would have been nice if they’d got the peak of the announcement”.

The Australian netball team was selected as late as possible, but from that point, control was out of Netball Australia’s hands. Commonwealth Games Australia set a date for each of its team to be announced, with netball allocated Tuesday 14th June.

Players were told a week earlier, partly for practical reasons such as uniform fittings, while emotional reasons also came into play. Marinkovich said, “We are extremely mindful not just of the players who make it, but also those who don’t – and their emotional wellbeing is crucial.

“Everyone is trying to play netball, waiting to know if they are selected, and it all takes an enormous toll. If players go out on court before they have time to process it, they can be flat and unenergized, and even risk injury.

“We also didn’t think that was fair on clubs to tell players at the last minute, when there was so much at stake that could impact on finals. So players and clubs needed to know well before going into their last game.”

There was also controversy over the timing of the addition of Maddy Proud and Ruby Bakewell-Doran?

Marinkovich said the players added have a strong chance of taking to the court for the Diamonds at some point this year. They needed to continue training if they didn’t make finals, to come into the squad camp in Perth, and in the case of Bakewell-Doran, to be ready to travel to England.

Marinkovich explained, “Every player in the league was spoken about in a great amount of detail – we had some pretty robust discussions and are very excited about the depth and future of Australian talent – and those were the two we added.

“We recognised what they’d been doing out on court since the initial squad was announced, but it was also important that their news wasn’t overshadowed by the Commonwealth Games announcement. They needed time to recognise that they deserved their spot in the squad.”

This will be your first Commonwealth Games too. How are you feeling?

“You have to embrace the excitement, there’s been so much happening around Covid, isolation, the Super Netball season and all the planning. We are finally getting to the last stages of this process and it’s great to ride that emotion, while also keeping it in balance.”

What was it like making the phone calls to the players?

“There is a lot of emotion involved. Tears of relief, tears of excitement, and also tears of sadness and disappointment.

“It also demonstrated the authenticity of what the girls showed in that moment and the humility of knowing that while it’s an incredible moment for them, it’s a difficult one for others. There’s such a strong connection across this group and the calls really emphasised that.”

Is there any clarity about what happens if Covid strikes the team during the Commonwealth Games?

In previous editions of the Games, players can be replaced up until the tournament starts, but not during, even if they are ill or injured. However, with the ease of Covid transmission, contingency plans are being considered by the Commonwealth Games Association.

Marinkovich said, “There’s a meeting on this week. At the moment it’s unknown what the rules will be, and even what Covid testing protocols our players will need. Hopefully we will have clarity about what the situation is for reserves at the end of the week, while the Chief Medical Officer will work through keeping the Australian team in as good health as possible.”

Other than Covid, what is the biggest challenge you will face?

“The absolute cream of each country will be there, but they all play very different styles. So it will be who can adapt to their opponents, and who can bring it in the key moments. You only get one chance, and you certainly want to make sure you’ve got your execution, that you can build pressure on an opponent, and absorb it as long as you can.” 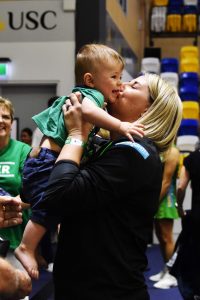 Stacey Marinkovich’s young son Matthew won’t be travelling with the group to the Commonwealth Games, although Bobby Bueta, and Louis and Frankie Brazill will be with the travelling party in the initial stages. Image Marcela Massey.

“There was such a fine line between players selected and those who weren’t.”

“She’s done so much hard work in the background not only to get her body right, but to be able to play consistently hard netball. Kiera’s execution and mid-range shot is a threat to any of the opposition and the defensive pressure she adds is important. I’m really pleased to have her back in the group.”

“Gretel gives us a post up position, movement in the goal circle, and obviously brings her incredible athleticism which we’ve seen all season at goal attack. She gives us a lot of options, and also combines really well with the different styles of shooters and goal attacks that we have in the group.”

“Our feeders find her movement really nicely, she has great balance in being able to get movement and depth down the court, and is accurate to post. Cara has found form in the later part of the season and has been a strong target all year. She can also cover goal attack if needed.”

“She’s the playmaker, she understands all the different types of play we are going to come up against, and can create the connections between the midcourt and the goal shooter. Steph also brings experience and her leadership is outstanding. She adds a lot more than just her experience on court, and gives us great balance.” 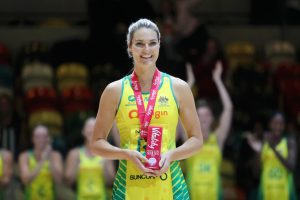 Gretel Bueta was MVP of the 2022 Quad Series, and plays a pivotal role at goal shooter or goal attack. Image: England Netball

“She’s a specialist wing defence, has great understanding of the role we need her to play in the team, and how it combines with the different strategies we are putting in place. Ash has the experience to lead. While she was selected over Amy Parmenter, who is another great ball getter, Amy is doing an incredible job. It’s not lost on the selectors what she can do on court and we will see that transfer into international netball at some point.”

“Paige is having a great season, and I often think she is unrecognised for the work she does. She creates amazing space for the players around her, she hits the circle edge and her turnovers are next to none. She’s really built into the season, and is impacting across both positions. Paige also combines really well with Liz, and is dogged in defence which we will really need.”

With Kate you know what you will get. Her consistency and performance has been there all season. She’s great with the ball control, she runs really hard, she can balance the court well which has improved this season and she can let the ball go in attack. She’s shown she can play a number of positions well, and we will need that within the tournament.

Liz is a phenomenal leader. She is very authentic, she plays the game with a cool, steady head, but also shows passion and drive. She understands what makes this group tick, finds a way to connect with all players in the squad, and has an enormous amount of respect. When she speaks, she gets a huge response from the group. 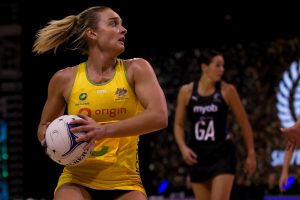 Captain Liz Watson is not only a formidable athlete, but provides ‘phenomenal’ leadership on and off court. Image Steve McLeod

With Bruce, Klau and Weston all certainties after strong seasons, they will regain their combinations quickly according to Marinkovich. “It’s getting some repetition out on court during camp so they grow that understanding of each other, and the cues to how they will support and back each other up.

“They’ve also been working on controlling their footwork, getting their arms down and working their angles.”

Marinkovich said the last decision was very tight, with small margins between the remaining three squad defenders and the final decision looking at what their role would be in the team. Of Aryang’s selection, she explained, “We will be facing some very big bodies out on court in attack, and Sunday has the ability to get around them with her agility and elusiveness, as well as being a ball winner. She also has a great ability to attack down court, and existing combinations with others. Maddy and Ruby have also been playing great netball this season, with their hard one-on-one and ability to create pressure.” 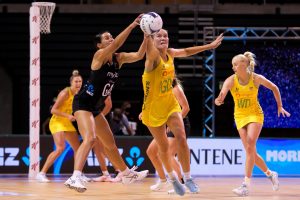 “There is a clear understanding of what their role will be coming in as a reserve player. It’s not an easy job to do. To be that selfless in preparing a team of 12 to go out on court is a big ask, but it’s something that I know the three girls will really embrace.

“We’ve spoken for a long time at the Diamonds that we all have different roles to play, but everyone has their part to play in working towards the success we desire as a group.

“Ruby has shown that she’s a great ball getter and plays really hard one-on-one in the Julie Corletto mould. We think she could really impact a game, so she’s an exciting prospect. However, we don’t know what that looks in the Diamonds structure as yet.

“Donnell provides us with great strength, accuracy and post up ability. As selectors we went through all the ‘what-if’ scenarios about what if a certain player gets ruled out, how do we cover that position? Donnell has the connection with Gretel and the ability to combine with our goal attacks and feeders.

“Jamie-Lee’s call was one of the toughest to make. As selectors we need to be really honest in our feedback, and like all the players I know she will work with that.”