The Robinhood Stars are looking to rebound after narrowly missing out on last year’s playoffs. A dominant start to the 2021 season culminated in them being on top of the leaderboard for the first eight rounds of the competition. After several clashes against teams who eventually made the 2021 playoffs, the Stars dramatically fell just shy of a final’s berth. The 2022 season is a new year, and Tobias Keddy interviewed their experienced head coach, Kiri Wills, to get her view of what lies ahead for her side.

On paper, last season’s team should have reached the playoffs. Defensive legend Anna Harrison returned to the ANZ Premiership. Maia Wilson and Gina Crampton had also just come off a successful start to their partnership, helping the Silver Ferns win the Constellation Cup against the Australian Diamonds. The team had both significant experience and talent on the rise, including up and coming athletes including Jamie Hume, Mila Reulu-Buchanan, Oceane Maihi and Elle Temu. It was a recipe for a talented young side to become a dominant force in the league.

The Stars potential was on display early, winning six of their first seven games in the competition. However, after three losses against the Northern Mystics, which all happened after round eight, the Star’s domination began to spiral and they lost five of their next seven games. It was a season of two halves for the side from South Auckland.

Coach Wills believed that the side, “Lost sight of what we were good at and what our strengths were”. Games became “tricky” when the side started prioritising analysis of the opposition instead of continuing to develop their own strengths. 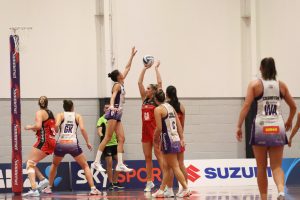 The Stars have a lot of defensive fire power, which will be challenging for opponents. Tactix v Stars Round 2 ANZ Premiership. Image Graeme Laughton-Mutu

The team will be looking to rectify opportunities gone begging last season and instead focus on their strengths. Wills acknowledges, that, “You always change tactics for your opposition”, but that the Stars will be prioritising their gameplay as their main focus.

With their team on paper, the Stars once again are looking to be one of the premiership’s strongest competitors. They’ve retained the services of Maia Wilson, Gina Crampton, Anna Harrison and the rest of their starting lineup from last year, which will allow for better chemistry this season.

In addition, two foundation members of the Stars, Kayla Johnson and Holly Fowler, have returned to the team. This marks Johnson’s long-awaited return to domestic netball after she took a couple of years off with pregnancy. While Fowler has had a whirlwind couple of years with ACL injuries, look for her to be guns blazing when she is back in the Stars dress.

A key strength is their defensive end. Last season, Harrison was second in intercepts, third in deflections and top-ten in rebounds. At the same time, Temu was third in intercepts, fifth in rebounds and top-ten in deflections. The Stars had a defensive end that picked up a lot of ball and created a defensive headache for their opposition. This will only be stronger with the addition of Fowler and Johnson, who are brilliant at picking up the ball and creating intercepts.

On paper, this team will be difficult to get past offensively.  Wills expressed, “The great thing about our team is that we can play our structure, but the differences in personnel can shake up what we are doing against the opposition”. She wants the opposition to second-guess who will be in the defensive positions each week as it is only advantageous to her side.  Perhaps the biggest difficulty will be finding the best combination while still rotating the defence to give them all opportunities.

The Stars look to be a team that can field any squad member and still be a world-class side, with bench players such as Lisa Mather, Temu and Amorangi Malesala all looking comfortable out on court. Wills believes that her squad has stepped up in the preseason, and any of the ten are capable of taking the court and making an impact.

During preseason, their training environment was described as having a “lot of heat”. Wills said, “When our Silver Ferns were away, those players at home had a massive opportunity to improve their game”. Expect the Stars this season to come out with a lot to prove not only for their team but also to show off their individual improvement. 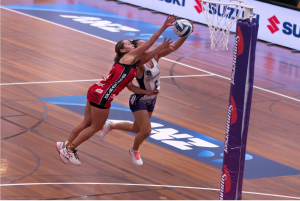 The 2022 ANZ Premiership can not be discussed without acknowledging the pandemic’s current climate. Most of New Zealand’s netball teams have had players come in and out after having COVID or being household contacts. There’s been an increase in replacement players from the National Netball League and the pool of uncontracted players. We saw this increase of uncontracted players in Round One, with the Waikato Bay of Plenty Magic had an uncontracted attacking line playing for most of the match. Indeed, the Stars didn’t take to the court in Round One, after the Central Pulse sought a postponement when Covid ravaged their team.

Kiri Wills noted the impact of COVID on the Stars side, and the importance of depth in her squad if they are significantly impacted. Key returnee Kayla Johnson previously has been ill, and while cleared to train, still needs to work up to match-day fitness, and so was not be part of the Stars side in their first game against the Canterbury Tactix. 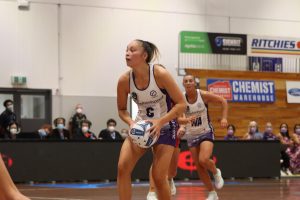 Player to watch out for: Mila Reulu-Buchanan

Look for Mila Reulu-Buchanan to be one of the breakout players of the season. The 23-year-old had a great season last year, where she was top-five in feeds, had 42 defensive pickups and developed an all-round centre game.

However, Wills has seen a massive improvement in her game since her stint in the Silver Ferns environment, after being selected for the January Quad Series tour. “Now she knows what she is capable of (and) I have seen a step up in her intensity in terms of what she contributes on and off the court.” Reulu-Buchanan has been working on her on and off-circle edge drive, something which Wills believes will be hard to stop. Expect a better all-round centre game with a consistent and dominant circle edge feed, and if Reulu-Buchanan can perform consistently, expect her to rejoin the Silver Ferns come the 2022 Commonwealth Games.

About the Author: Tobias Keddy