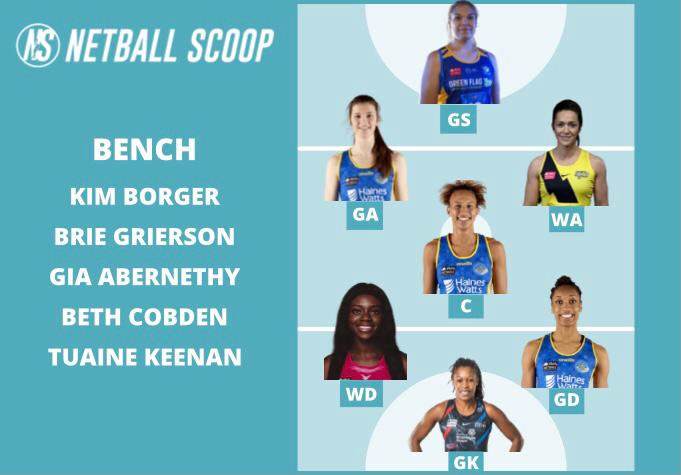 GS – Donnell Wallam – Heading into the 2021 season, West-Australian Noongar-Kaniyan Donnell Wallam was perhaps the most hotly anticipated arrival to the Vitality Netball Superleague. Despite fracturing her radius bone in only the second match of the season, Wallam made a full recovery to triumphantly return to play in Round 10 against Team Bath. Wallam has added 483 goals for her team across just thirteen matches, averaging 37 goals per game. Her ability to sight the goal post from anywhere, her spectacular falling out of court shots ,and defensive abilities have made her somewhat of a cult figure in the netty world and it’s only her first year playing at an elite level. With the Australian Diamonds currently in somewhat of a building period ahead of the Commonwealth Games next year, this really is just the start for netball’s newest shooting sensation – an Australian call up cannot be far away. 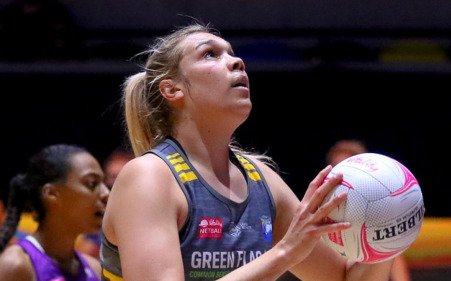 GA – Sophie Drakeford-Lewis – Unassuming yet superbly efficient, Drakeford-Lewis has really grown in confidence and court presence this year, making her partnership with Kim Borger one of the most potent in the league. Her trademark front cuts and baseline drives are executed so smoothly, it’s often hard to fathom how she finds herself in excellent shooting positions, seemingly with ease. Combined with her high shooting action and unflappable nature, she looks set for a long international career.

WA – Caroline O’Hanlon – At the start of the season, many (including many of us here at Netball Scoop) questioned how Thunder were going to go without a ‘specialist’ Wing Attack. They had superstar names across the court, yet their midcourt was a tricky puzzle that took them a few weeks to get right. However the work rate and skill from Caroline O’Hanlon allowed her to make that Wing Attack position her own, bringing her own style of creativity and flair to service the Thunder shooting circle. She is able to effortlessly combine her vision and accuracy with some pinpoint feeds and steely defence, earning her the Wing Attack bib in our team of the year. 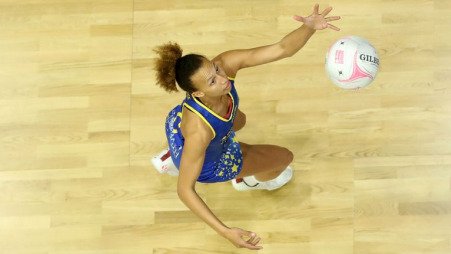 C – Serena Guthrie – You just can’t ignore the work that Team Bath Centre Serena Guthrie has done this season to help her side secure that spot at the top of the table. Her athleticism and ability to pick up those 1% balls is second to none. She has set the pace and tone for Team Bath this season and demands so much from her teammates, yet is always the first to ensure she is leading by example. She is the crucial lynchpin at the heart of Team Bath’s attempt to take the title, urging on her defenders, driving through midcourt at pace and releasing her shooters into space.

WD – Funmi Fadoju – Fadoju is only young, but she’s already making a name for herself as a player to watch for the England Roses. Although Pulse haven’t had the season they hoped, Fadoju has put in some outstanding performances and has been a real game changer. An extremely versatile defender, we have seen Fadoju play across Goal Keeper, Goal Defence and Wing Defence, however with her speed, agility and ability to read the play, Wing Defence is the perfect spot for her our team. The energy she brings on court help lift the players around her and her explosive style of play is nothing short of thrilling. 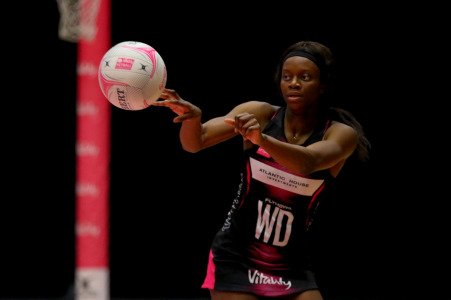 GD – Layla Gusgoth – One of the league’s great multi-taskers, Guscoth combines her demanding role as a doctor with an equally challenging position as an international and Team Bath netballer. Her rangy style, incredible anticipation and ability to elevate herself to almost Michael Jordan-esque hang times makes her one of the most feared defenders. Making her return to the Superleague this year, she has slotted seamlessly into the Team Bath defensive line and is a true workhorse for the full 48 minutes.

GK – Towera Vinkhumbo – Vinkhumbo has been a revelation this year in Goal Keeper for Strathclyde Sirens. Picking up the player’s player award, voted by her fellow athletes, Vinkhumbo has continuously impressed across the season. Her innate ability to read the play and dynamism to get herself to the ball has won back plenty of ball for Sirens this year and has been vital in building the success of their season. Her defensive partnership with Scottish Thistle Emily Nicholl has continued to develop throughout the season and it’s easy to forget that she was only with Sirens as an injury replacement. Ending the season with 60 intercepts, 93 possession gains and 56 deflections, I think she’s one they will be pretty keen to keep hold of for 2022. 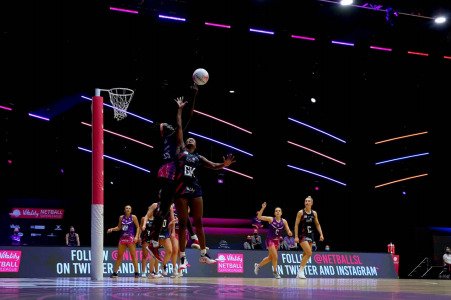 Kim Borger – Borger has just been fantastic to watch this season. Her ability to pull in ball, her footwork and her shooting stats have all been a winning combination. Consistent under the post, Borger has added 564 goals for her team this year and is the league’s second most accurate shooter at 93%. She commands the baseline and knows exactly when to pop out the circle to alleviate pressure on her midcourt. 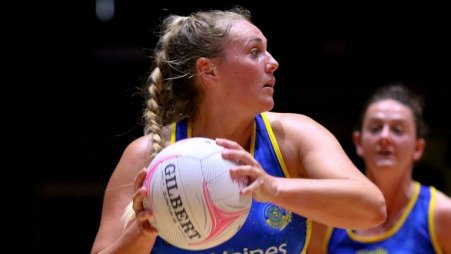 Brie Grierson – If you looked for the word ‘flair’ in the dictionary, you’d find a picture of Brie Grierson next to it. Having Grierson on our bench was an easy choice as she has been a break-out star of VNSL this year. She plays with freedom and no fear, and has proved impossible for so many Wing Defences to stop. Her vision is unparalleled and her bravery to let the ball go has created some of the most exciting passages of play to watch as a spectator.

Gia Abernethy – Gia’s obviously a talented player, with a lot of grit and determination, both elements we rate highly here at Netball Scoop. Her leadership skills and ability to remain calm and controlled in high pressure situations make her an asset to the team. Wearing the Centre bib, her athleticism ensures she is able to work the ball through court and provide plenty of support to her teammates. Her patience in attack and well-timed Captain’s intercepts has seen her command the midcourt for Siren’s this year. We have the team flourish under her leadership, and the way she carries herself off-court is also exemplary. Gia set the tone for her team early on in the season and her leadership on and off court has proved vital to the team’s success. 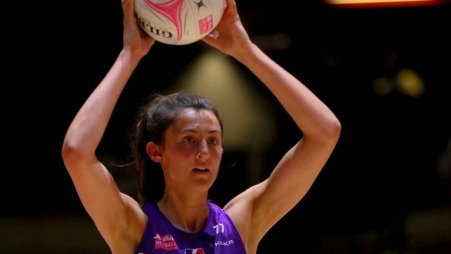 Beth Cobden – Voted the Vitality Netball Superleague Player of the Year, it may be amiss to have Beth not in our starting seven, however that really is just indicative of the work that she does within the Loughborough Lightning side. Often going unnoticed, Cobden is a silent assassin on court, working tirelessly to push her Wing Attack out of position and create plenty of opportunities for her defenders to turn over ball. With arms for days, her versatility to play forwards in Centre gives her team a defensive edge and her consistency on court is often understated.

Tuaine Keenan – A surprising choice, perhaps, given that Keenan doesn’t make any of the top 5 tables for intercepts, deflections or turnovers. However despite missing a few rounds due to injury, Keenan has been one of the most underrated defensive players in the competition this season for her consistency, work-rate and impact. She’s a shorter defender but has outstanding footwork, plays aggressively and is deceptively lethal against taller shooters. She confuses the space, pushes them off the backline and isn’t afraid to come out the circle for an intercept when opportunity presents. She is the complete Goal Keeper package as she is able to mix it against holding and moving shooters whilst also being able to direct from the back in attack. 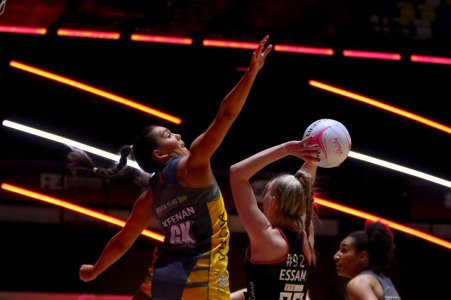 A true testament to the level of excellence that was on display throughout the 2021 season, was the calibre of players that missed out on being selected. English Rose Ellie Cardwell came so close, stepping up in to the Goal Attack position for Manchester Thunder this year, proving her capability to work the ball through court. Imogen Allison’s partnership with Serena Guthrie very nearly earned her a spot in Wing Defence, turning over ball for Bath exactly when they needed it this season. Niamh McCall has been outstanding for Sirens in attack, with a Housby-esque calmness on highly pressurised shots. Amy Clinton has been a shining light for Celtic Dragon’s throughout an incredibly tough season and Jodie Gibson has returned to the League with a bang after suffering with injuries. All of this, is only a sign of the excellence to come for netball both domestically and on the international stage.