It was gone in a flash.

New Zealand showed passion, grit, and skill, but in only three minutes in the third quarter. Jamaica slammed on eight goals to one, and skipped to an unassailable lead. Katrina Grant concluded her great personal tournament as captain with not even a bronze medal. There was no answer to the two towering Jamaican shooters, their three-pronged feeding, and tenacious defence running on one leg. The Sunshine Girls triumphed 60-55.

Straight away the Kiwi defence was swarming, denying flowing attacking plays and circle edge feeds for Jamaica. Mes got involved early, holding perfect positions against both Sterling and Facey and scoring her first two shots. However, just as in her semi final, if Mes tried to move and hold together, and was penalised for contact. Although not quite as adept at blocking the top of the circle as the injured veteran Thompson, Adean Thomas started to use clever dodges to get good feeding position for Fowler-Reid. Her team led 8-6 half way through the quarter.

The intensity of New Zealand’s defence abated slightly, allowing the A plan in attack for Jamaica to work every time – mid-length pass to towering shooter at edge of circle, pass back to one of three fast feeders, reposition shooter, short well-placed lob and accurate shot. Only once did this pattern fail, when Fowler-Reid opted for a cross-circle pass and didn’t read the move of Thomas. Sinclair pounced on that ball, and kept scrapping for every loose possession, with three pickups, two deflections, and an intercept in the first quarter alone. Sterling answered at the other end with a marvellous deflected shot in a series of inspired plays. In the shadows of quarter time, Kelly Jury took the court in place of Fakahokotau, who had rolled her ankle challenging Fowler-Reid. Jamaica led 15-11 at the break.

New Zealand came out well in the second quarter, slowing down access across the Jamaican attacking line greatly. Mes was more available, and while not shooting at 100% as in the first quarter, she started to take clean rebounds. Sterling counteracted this with three rejected shots in the first half, the most for her in the tournament. Six minutes in the treatment to Fakahokotau’s injured ankle was completed, and she returned to the court with Jury off, and the scores 22-17 to the Sunshine Girls.

Despite fierce pursuit by Grant, the 22 year old Beckford was the main access into the goal third for Jamaica. She ran countless miles and got some dazzling airtime on every take. The Jamaican formula in attack was undone three times, passes to their shooter held too long and then placed out of reach, much to the delight of the crowd. Kara was having little trouble freeing herself, and Mes presented strongly. The battle between Mes and Sterling was fascinating, and Mes might have taken the match away if she wasn’t shooting a woeful 7 from 13 for the quarter.

Continuing a method seen in many matches in the tournament, wholesale changes occurred only a few minutes before half time. Francois went off injured, with an apparently corked right thigh, and Kersten joined at wing defence with Sinclair into centre. Vangelee Williams took Facey’s spot at goal defence, with Ward entering on the wing, and Romelda Aiken replaced Fowler-Reid. The next few plays were messy from both teams, but the introduction of Aiken did allow Jamaica to start scoring again, and they led 29-27 at half time. New Zealand were suffering the frustrating statistic of having 40 attempts to 32, but shooting at 68% compared to 91% for the Sunshine Girls.

New Zealand came out more composed in the third quarter, able to ignore the passion and pressure better than their rivals. Vangelee Williams heard a caution for intimidation, baulking her jump over the shot, and Sterling went further with a warning for intentional contact. Aiken, too, wasn’t confident, missing some easy shots and being called once for held ball.

Mes’ shot is not only rejected by Sterling, she gets a slap in the face on the follow-up jump (Photos: Simon Leonard)

Sterling was fiery, determined to get every rebound and loose ball, ending up on the floor but getting up more slowly each time. She momentarily got the upper hand over Mes – the Kiwi shooter having quite a conversation with umpire Phippard. Midway through the quarter, the scores were locked 33 all.

There was a sudden change in momentum, with the whole Jamaican front line warming to the feed into Aiken. Her leap was unstoppable, and she rebounded almost every missed shot. The Sunshine Girls quickly took eight goals to one, changing the atmosphere completely. The New Zealand options in attack were too blinkered, passing to Kara on a clearing lead when one of the shooters should have punched through the space that opened in the middle. Ward, who had twice got a hand to a pass to Kara in the pocket or sideline, came up with a ripper intercept in exactly the same position.

Mes needed to cool herself down, and so Ekenasio was introduced at goal shooter. Sensing the game slipping away, Sinclair and Kersten fervently attacked every pass, gaining some much-needed possession for the Silver Ferns. One of very few intercepts by Fakahokotau was denied by a coincident contact from Grant. The captain made amends with a marvellous sprinting intercept of a lateral pass on the transverse line. Regardless, the three-quarter time score was 46-39 to Jamaica.

Upon resumption, Williams joined the fun and had a turn blocking the shot of Ekenasio. The Kiwi defence scrambled desperately to create loose balls and cover leads of feeders, but there was always an option for Jamaica, and the quick release into Aiken was rampant. Ekenasio was using creativity to be available off the body and in different spaces, but she was also shooting at under 70%.

Amazing take from Aiken, then off balance and keeping the ball in play (Photos: Simon Leonard)

The Jamaica defenders looked completely spent, but every play they managed to keep their feet moving and eyes up, blocking vision and access enough to make up for the rare misplaced passes to Aiken at the other end. With five minutes remaining, Paula Thompson came into centre for the waning Thomas. The lead hovered at 6-8 goals, and with two minutes left, Sterling nabbed an easy ball as Folau tried to a pass to Ekenasio that simply wasn’t on. The Silver Ferns rued the small patch of unfocused play in the third quarter, and handed the Sunshine Girls a five-goal victory and the bronze medal. 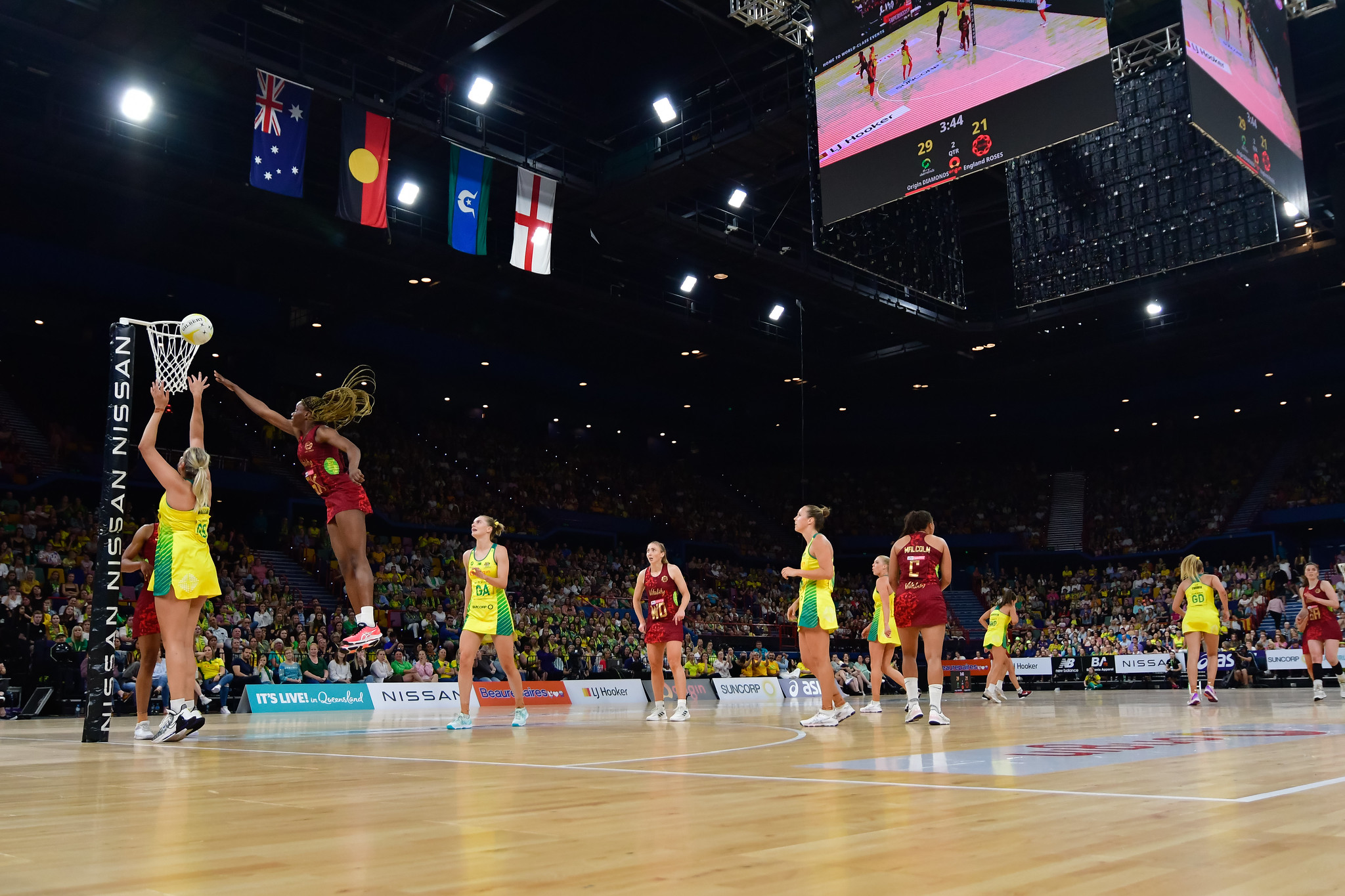