At Netball Scoop, we pride ourselves on our great netty insight and analytical approach to reviews and previews. And, we have an outstanding record for predicting winners: together, our team accurately guessed the placings for the 2019 Netball World Cup when NO OTHER media or netball organisation did.

So how did our crystal ball fair when choosing the 2021 Suncorp Super Netball finalists?

Well, we didn’t do too bad with both NSW Swifts and GIANTS Netball unanimously appearing in every polled member’s top 4. And, our preview king, Dr Andrew Kennedy, and one of our newest writers, Esther Nelson both chose the top two.

Now, let’s work that crystal ball magic again to see who can predict the outcome of the Grand Final:

I think GIANTS will prevail in a tight and exciting match. Their form keeps improving, especially the shooting combination of Harten and Dwyer, and their turnovers have radically dropped, thanks to a short sharp and safe attacking brand. The midcourt never seems to fail: Parmenter is more tenacious and coming back to her most disruptive. And the younger players are so calm, while Brandley provides the spark at the back they need.

My heart tips the GIANTS. It would be a fairytale end to the season if Harten shoots the lights out, the GIANTS win by 2 points and Harten is named MVP for her first national title. This narrative of the hero overcoming adversity (internet trolls) is a great message for our sport and the story we are trying to tell as everyone loves an underdog turned hero.

Another interesting part of story for me is the Bassett issue. As a fan I was angry at the GIANTS. When Bassett was told her services were no longer needed and she went to Magic to play part of me hoped that she would have a blinding season, leading Magic to top 4 to show the GIANTS they were wrong. Instead, the GIANTS without Bassett and with a whole bunch of youngsters from NSW, has gone through to the grand final, something they haven’t achieved since 2017. It has completely changed my perception of the situation. 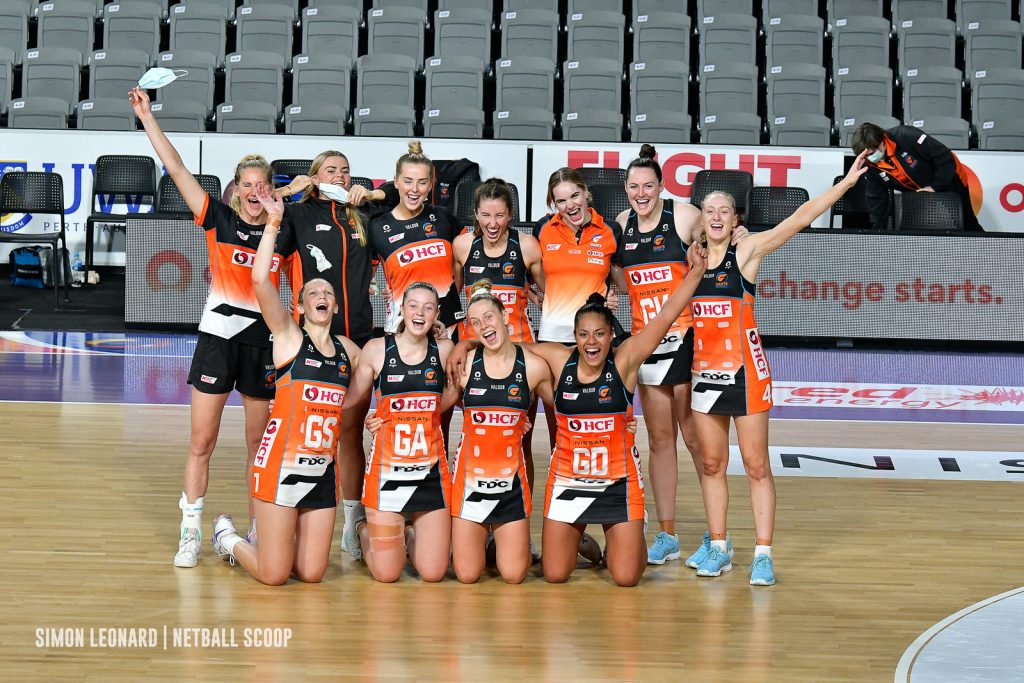 I’d love to see the GIANTS prevail, purely for the feel good story – amazing that Harten’s never won a premiership!

The GIANTS only lost by one goal to the Swifts in their major semi-final, in a nervous outing that was also April Brandley’s first game back after an injury. However, they put that behind them, and were so calm and composed against the Fever – I think this form will carry over into the grand final. It’s the Swifts to lose – they have more finals experience and more experienced players, so it will be fascinating to see how they control their nerves and expectations.

While defence does win premierships, I’m tipping Sophie Dwyer for MVP.  Her court work has been outstanding, and she’s shooting a high volume of goals for a GA. I think she could have the better of Turner, particularly if Turner drops back into the circle to help Klau, while I find some of the other positions more evenly poised.

As someone who’s been unable to get their appropriate netty fix over the past few weeks, my tips aren’t as well researched as I hoped they’d be.

I’m tipping GIANTS to win by 1 in ET. They’re peaking at the right time and have built a solid game plan over the past few weeks. Their attack end was part of their downfall in losses throughout the season but they’ve cleaned up their turnovers and are more reliable on the shot.

I’m backing Sam Poolman in for another MVP performance (as a GK it’s my duty to select a defender). Full of confidence from last week’s demolition, she has another mammoth task in shutting down Sam Wallace. Whoever wins this battle will have a big say in how the match swings.

I feel like on paper the Swifts are the ones to have your money on. They have the experience in all thirds to come out and play that calm and measured style of netball that has seen them be one of the top teams over the last three seasons.

Saying that, I can’t shake this feeling that the GIANTS have been building to this one game all season. I picked them as Grand Finalists at the start of the year because they looked amazing in pre-season games. There was a new energy and confidence I saw from the squad, that reminded me of the pre-season the Swifts had in 2019 when they won their premiership.

They’ve had some nerves and lost their footing through the season, but they’ve stood up when it’s mattered and my gut instinct says they’ll win and Julie Fitzgerald will win coach of the year. What she’s been able to achieve with a team who lost their starting goal attack in game one is extraordinary. She’s had a clear vision for this team that started last year when she had the courage to bench the Diamonds goal shooter, and she has never been swayed from the vision of what she believed this team could be. The trust she has in her team has elevated them all to a new level.

My gut feeling is Giants. The way they utterly dominated the Fever last week (yes albeit for three quarters) was incredibly impressive and goes to show what a great tactical coach Julie Fitzgerald is. As always the question is which team will come into the grand final better – the team that had the week off in the Swifts or the team that played another week in the Giants. For me, that is where I feel the Giants will get the win this weekend. The energy and connectedness from all the players in the elimination final last week was electric and that momentum I think will be too strong for the Swifts.

For game MVP I am going Jo Harten. As was written this week she has previously been in three grand finals and has been runner up in all of them but I think this week she will again show why she is a force to be reckoned with. If Jo doesn’t get it id back Amy Parmenter – as a Silver Ferns supporter, she is a scary prospect if we get Constellation Cup this season, and really when does she ever have a bad game! 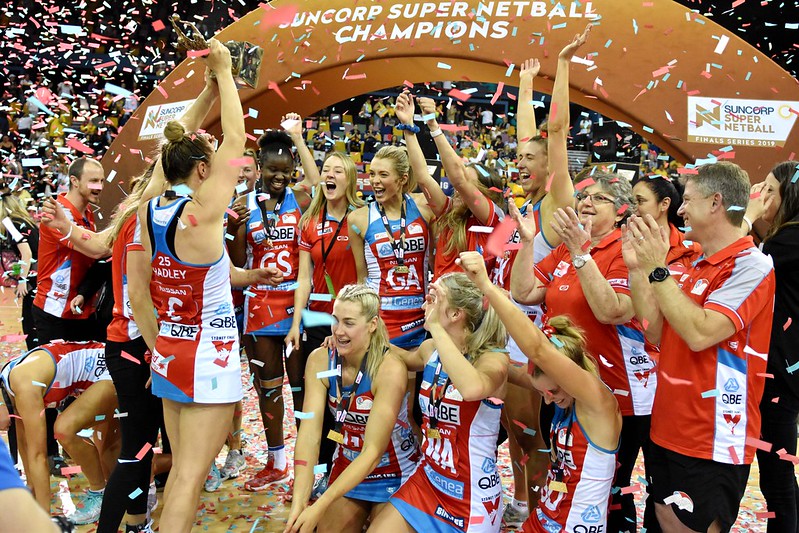 The Swifts were premiers in 2019 and will be hard to beat with a mostly unchanged lineup. Image: Marcela Massey (2019 SSN Grand Final)

I’m really looking forward to the grand final. So many great clashes all over the court. Proud v Price, Hadley v Parmenter etc, but I think it will come down to the battle of the bookends. I’m expecting it to be a close game, but I think Swifts will just prevail thanks to Sam Wallace and Sarah Klau. They were the stars of Swifts’ 2019 grand final win, and I think that both will be important factors in this game again. Wallace has starred in clashes between these teams this year, shooting an average of just over 47 goals per game at 92%, and being named MVP in both Swifts’ victories. Her opponent, Sam Poolman, was terrific against Jhaniele Fowler last week and had a great game in the one clash that GIANTS won this year. If Wallace wins this battle, it will make things tough for GIANTS. At the other end of the court, a lot depends on Jo Harten and what sort of form she’s in. If Sarah Klau can nullify her or even just put her off her game slightly, it will go a long way towards a Swifts win. Most of these Swifts players were a part of that winning 2019 side, which should hold them in good stead.

Swifts didn’t have the smoothest run into finals, nor did their major semi go all their way. I think they will take a lot of learnings from those experiences and coupled with two weeks of rest they will be firing. Swifts are a team who play with a lot of passion and patience and effectively think their way through trouble spots. Whereas GIANTS tend to close up and lose communication when things start to crumble. So, I’m backing Swifts in to take the win by 7.