Like Old Mother Hubbard, netball went to the cupboard, and found that it was bare.

It’s been more than 30 years since Australia hasn’t held at least one of the pinnacle titles  – the Netball World Cup, the Commonwealth Games* or the Netball World Youth Cup** – within a four year cycle. While the tangible and intangible factors behind the dearth of silverware are sure to be reviewed, it’s worth looking at the impact of physicality on the Australian game.

For some years now a premium has been placed on more athletic netballers. Strength and conditioning is a focus, with players spending more time in the gym than ever before. Clubs are desperate for wins, bodies are placed on the line, and the outcome is considered by many to be spectacular. Promotional clips for Suncorp Super Netball feature the thrills and the spills, with heavy collisions and falls making up a fair proportion of the highlight reels.

But does such physicality create a winning formula? Netball Scoop examined statistics for all eight Suncorp Super Netball franchises this year, with some surprising results. We compared final ladder position after round 14 with a range of metrics, including Nissan Net Points, goals scored, gains, intercepts and penalties (contact and obstruction).

Interestingly, the strongest correlation was between a team’s final ladder position and the number of penalties they incurred across the season. As a general rule, the higher a team finished, the less penalties they racked up, with the difference between 1st and 8th position on the ladder a massive 365 infringements.

Why is a chicken and egg question. Were players from the winning teams more skilful? Could they have more impact on the result because they remained in play? Were lesser ranked teams in chase position, and therefore more likely to be penalised and stood beside their player? Either way, the top four ranked teams who made up the finals were the least penalised across the season.

Figure 4: Ladder position vs gains had the lowest correlation of the measures.

The impact of physicality and penalties was also felt on the bigger stage. The Suncorp Super Netball league is officiated solely by Australians; for international matches, umpires are neutral. What is acceptable in our domestic league becomes more penalised internationally, and the Diamonds struggle to adapt to the difference. Netball Scoop looked at the last seven matches between Australia and New Zealand, and in every game – bar one – the Diamonds had a higher penalty count.

In the graphs below it can be seen that in general terms, the closer the match, the higher the Australian infringement rate was. In the Diamonds’ two losses against the Silver Ferns, their penalty count was higher by a hefty 33 and 36 infringements. It points to a lack of discipline among the Diamonds that begs the question – did it impact the result? 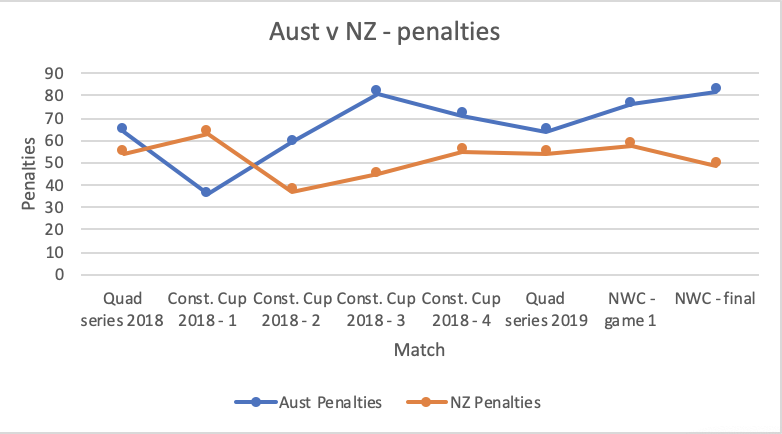 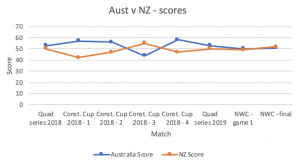 Comparing the penalties between each Suncorp Super Netball team across the 2019 season, and the eight matches played between the Diamonds and the Silver Ferns during the period assessed was also interesting. Total penalty counts were averaged to give a figure per game, and the two New Zealand influenced sides – both coached by Noeline Taurua – were the least penalised teams. The Diamonds were the second most heavily penalised side, second only to the Firebirds.

Clearly, international umpires are calling more penalties against Australian athletes than our home grown umpires are.  While the number of games aren’t even, which skews any analysis, clearly there is a worrying trend.

Player welfare is also of concern when discussing the physicality of the Australian game. In recent seasons there have been a spate of head and facial injuries, which have included concussions or cuts to Emily Mannix, Charlee Hodges, Serena Guthrie, Hannah Petty, Sam Poolman, Geva Mentor, Gretel Tippett and Paige Hadley, among others. Natalie Medhurst – with her two sets of facial lacerations and two sets of fractured ribs in the last twelve months – is either very unlucky, or more likely being closely marked to try and curb her influence.

While some of these injuries were accidental, others were from late or clumsy challenges, while obstruction was also used to tactical advantage at times. They not only impacted the player – who in the case of injury had to leave the court for treatment  – but also their team and therefore potentially the result.

With the head ruled sacrosanct in other codes, and the increasingly physical nature of netball, it’s time for our sport to address the issue.

While many will argue that physicality adds to the spectacle of netball, it’s hard to go past skills that are perfectly timed and executed. A flawless intercept when Karla Pretorius uses her outside arm, or Geva Mentor rolls into the backspace, when Steph Wood or Maria Folau swish a long range goal, or Laura Scherian drives hard onto the edge of the circle.  They’re some of the least penalised players for their position, but their exploits still provide the thrills that we’ve come to expect from the modern game.

Australian netball has never apologised for the physical nature of its game, but perhaps it’s time to ask: is it really effective?

* Netball at the Commonwealth Games commenced in 1998