NS EXCLUSIVE: Ash Brazill – Anything is possible, Part I

NS EXCLUSIVE: Ash Brazill – Anything is possible, Part I

2019 has been perhaps the best year of Ashleigh Brazill’s life. All-Australian honours in the AFLW, a thoroughly deserved recall to the Samsung Australian Diamonds, and, most importantly, a baby on the way.  While Ash is quick to credit those around her – family, coaches and teammates, and particularly her wife – for their support, her tale is one of courage and inspirational perseverance. 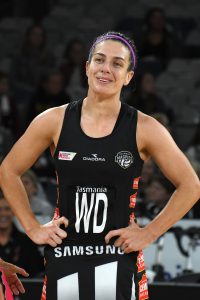 A country girl from New South Wales, Ash grew up on the sporting fields and courts of Bargo, where her parents played mixed netball. She laughed to remember her first trials for a representative side at Wollondilly, saying, “There were only five of us, so I was an automatic inclusion.”

At that young age she had no idea that netball could be a career, or that it would become a consuming passion. Taken to see her first Sydney Swifts game when she was 16, she remembered, “It was a grand final, and to see the crowds, the atmosphere, I knew that was what I wanted to do. From that day on, I set my goal to one day be an elite netballer.”

While Ash and her brother played football locally, netball training for the junior Hunter-Jaegers involved an enormous amount of travel. Ash’s mum would leave work early, and the pair would drive four hours to Newcastle for a two hour court session, then four hours home again.

Spending eight hours in the car each trip was when Ash learned how to speak her mind, and more importantly, how to listen. She said, “Mum and I spent so much time together I think we got to have a different bond to many mothers and daughters. At times I forgot it was Mum and I was just chatting with my best friend. The amount of stuff we would talk about, and I also got to know her and see a different side of her.” Those open lines of communication were to become crucial when Ash was struggling with her identity.

For some time the teenager had been wondering about her sexuality. Ash said, “I was questioning, ‘Who am I?’ I didn’t want to be gay, and I was dating a guy just to prove to myself that I wasn’t.’ Being a country kid, you never heard anything positive back then. I didn’t know of anyone who was gay, I didn’t have any role-models to follow in their footsteps, you never heard of gay athletes, especially in netball. I didn’t know who to speak to, and my parents were Catholic Italians. So it was all pretty nerve-racking for me.” 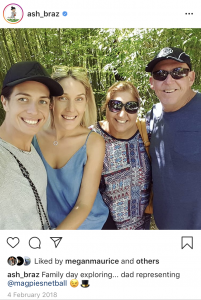 Ash has a strong bond with her parents. Pictured together with wife Brooke. Copied, with permission, from Ash Brazill’s Instagram account

Moving away from home to the Australian Institute of Sport was important for her growth: Ash listened to her inner voice, learning just as much about herself as she did about netball. She explained, “I wasn’t sure who I was, and while I didn’t have a girlfriend, I needed to make sure I was right before I said anything. There wasn’t any background noise at the AIS. I had time to think, ‘Is this okay? Am I okay with who I am?’”

Ash reached a point where she was comfortable with herself, and started quietly letting people know that she was gay. She said, “It was a secret for so long, and then I started leaving hints because I wanted people to know. Everyone respected me and wanted me to let them know rather than come and ask. So when I finally did, it was a weight off my shoulders. And the funny thing was everyone was like, ‘Great, I’m glad you finally told us!’”

Ash was concerned about how her parents, with their religious beliefs, would take her news. She needn’t have been, as their only worry was about whether she’d be accepted in netball circles. “It’s pretty funny now when you think about it, but it mattered at the time. My parents have always been supportive and taught my brother and I to be who we are, although I don’t ever think they expected me to be gay!”

“But they’ve always challenged us to speak up if we don’t believe in something, if someone is getting picked on, and they’ve taught us to be kind and to be who we are. So, while I’d worried about the background noise, it was probably my noise rather than anyone else’s, just not knowing how they’d react.”

After a year at the AIS, Ash received a call from Sydney Swifts coach Julie Fitzgerald, offering her a contract with the club. It was a dream come true, even if for two years she sat on the bench during game day. Ash said, “I was very nervous going into the Swifts, with the likes of Cath Cox, Kim Green, Vanessa Ware, Susan Pratley, all the big names. I was starstruck, but loved it.”

“It was hard being on the side lines for so long, but back then that was just what you did. You didn’t question it, you just worked your butt off.”

The second year was far better than the first; defenders Sonia Mkoloma and the newly arrived Mo’onia Gerrard took the youngster under their wings. According to Ash, “Mon was my idol. She’d say, ‘At every session just think you need to beat Kim Green to get on court. Don’t get down on yourself, because if you can beat her, you can beat anyone!’

“Having an older mentor put that kind of mindset into your head was great, and it something that I push with young kids now. I still rate Kim as one of the best wing attacks in the league, and it reminded me that you don’t just get given a spot on court, you earn it.”

However, with seven internationals playing for the Swifts, Ash knew it wouldn’t get any easier to get court time. So when Norma Plummer, newly appointed to guide the Fever, rang, Ash accepted an offer to head west. She wanted to see how the highly respected former Diamonds’ coach could add to her game. 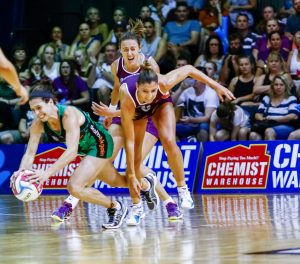 Ash still rates the move as one of the biggest challenges of her life. She moved into a house with Verity Charles and Chanel Gomes, and at 20, was the oldest of the group. They learned how to fend for themselves, and what is needed of an elite athlete. Ash said, “You learn pretty quickly, especially with Norma, how to behave as an athlete. And a lot of changes happened to Fever over that year because of her expectations.”

The changes were needed, because Fever had somewhat of a reputation. Ash said, “There was a stigma around the team at that point. It didn’t matter to the players if they won or lost, they were going out afterwards, partying hard and having fun. You’d speak to players from that era and they said it was the best time they’d ever had. You’d ask why, and none of it was to do with netball.”

“I remember when I came across I had an older player tell me not to get caught up in it. I’m not a partier, I’m a grandma – have a cup of tea at night and go to bed. I didn’t really believe it until I got there. While I wouldn’t want to change those people for the world – they’re awesome humans, there was always that party mentality.”

Ash met and married Brooke Grieves during her years at the Fever, describing her spouse as the ‘strongest person I know.’ “She knows what she wants and just goes for it. Even us dating, for instance, she’d never been with a girl before and we’d been hanging out. One day she said, ‘I have these feelings and they’re weird, but I want to know what they are.’ I freaked out and said, ‘Well, don’t hurt me. I know who I am.’ She knows who she is though, and I take my strength from her.” 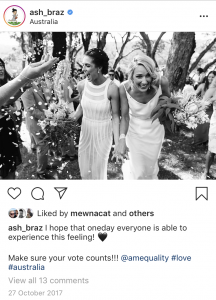 Towards the end of her fifth year with Fever, Ash knew it was time to move on. She was struggling with injury, too-frequent air travel, and an excuse mentality whenever they lost. She said, “I couldn’t cope with that. Every loss hurt me more and more. I think we were blaming other people rather than taking accountability. When we were asked why we were unsuccessful none of the excuses were to do with us as a playing group.”

When the 2016 season finished, Ash didn’t leave her house for a week, spending much of her time in tears. “As captain I blamed myself, I wanted to be better and do everything better and I didn’t know how. So, I decided to question everything and started to blame others. Brooke picked me up on it. She said I’d never, ever done that. At that point it just hit me that it was time to go.”

In demand by four clubs, Ash spent time talking to each of their coaches. She heard the positives, which were uplifting, but it was Kristy Keppich-Birrell, newly appointed Collingwood coach, who surprised her. “She went through how to beat me. I’d never had a coach do that before, and I thought, ‘That’s ballsy, for starters!’ But after that she went through how we could fix that, and how I could improve so I didn’t have those weak spots in my game.”

Personal reasons were also important for Ash and Brooke in their move to Victoria. They wanted to discover what they were like as a couple away from the comfort zone of relatives in Sydney or Perth. They’d also known from very early on that they wanted to have children. Ash said, “We started the process of IVF in Perth and it was extremely hard, even just getting paperwork done was ridiculous. It’s more normalised for a gay couple in Melbourne.”