Before Ash could take the court for the Magpies, she needed to fix her body. She’d previously been told that she was too athletic for her own good, that her aerial style of game was injuring her knees, and a history of leg injuries and surgery seemed to prove it. Collingwood’s medical team disagreed. “The doctor pointed out how I was standing, which was with my knee hyperextended, or over-straightened. He said, ‘Your injury is nothing to do with sport, it’s how you stand.’ To hear that when you’re 26 or 27, I wondered how the hell I was an athlete if I couldn’t even stand up properly.” 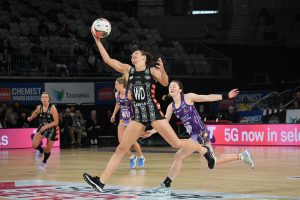 A stronger athlete after relearning the basics. Indigenous round 2019. Image Aliesha Vicars

Months of hard work began, and it wasn’t easy. Relearning the basics, right down to adjusting her standing posture, with Brooke nudging her repeatedly to get it right. Ash said, “I was so angry. I wasn’t allowed to run until I’d got the standing part right. Then when I’d be running, they’d be telling me to bend my knees. And I’d be crying on court, because I’d had enough.”

The Magpies’ doctor sympathised with Ash. He sat her down and said, ‘You’re not limited because of this. This is performance enhancing. At the moment you’re doing everything wrong, so when you do it right, your numbers are going to go up.’

“That excited me. And since we’ve done it my personal bests have shot through the roof. My speed’s grown, my jumps are higher. It’s crazy – one little fix in the way you stand, walk and run, and it helped so much.” 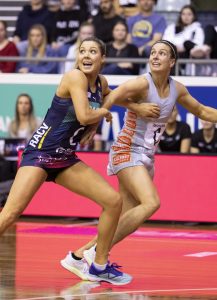 Despite having an incredibly strong roster when the Suncorp Super Netball league launched, Collingwood didn’t win as much as people expected. Ash put it down to too many egos. “We didn’t really manage that at the start. It was more, ‘You’re the best players, you can do whatever you want,’ and expect them to win the game for us. We didn’t play as a team.”

She credits improved results this year with some straight shooting. “One of Rob’s (coach Rob Wright) strengths is that we’ve had good, honest conversations, not about what we think but about how we are perceived by others looking in at us. That’s the stuff we want to change. Sometimes it’s a little bit brutal, but we’re all old enough now that we understand those conversations come from a good place. That your teammates and coaches want you to be a better player and they know you’ve got more to give.”

2019 has certainly been a year of challenges for the fledgling netball club, including the Browne sisters, Madi and Kelsey, both suffering season-ending knee injuries, coach Rob Wright’s mother’s illness and death, three pregnancies in the group and Nat Medhurst’s fractured ribs impacting the finals were just some of the season’s highs and lows. Such experiences have created an unshakeable bond. Ash revealed, “In the past, instead of protecting each other from problems, we got angry with the media and didn’t really talk about it. It was the wrong mentality.”

“This year, we’ve talked everything through, kept the information in house, protected each other. We’ve become more of a family than a team, as our relationship is about more than just netball.” 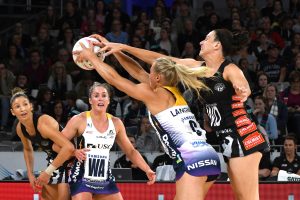 One of the advantages of being at Collingwood is being able to play AFLW as well as netball, something that Ash has successfully navigated so far. And while she’s shone on the football field this year, winning All-Australian honours, it’s been her recall to the Diamonds that really got fans buzzing.

Originally selected back in 2012, she had to withdraw without playing a game courtesy of a knee injury. It took three years to be reselected: Ash earned four test caps in the 2015/16 international season, only to be dropped shortly afterwards. She didn’t crack the team again until recently, despite stand out domestic seasons in 2017 and 2018.

Reflecting on the large gaps in between, Ash said, “I remember getting picked in 2012 and while it was exciting, it didn’t feel real because it had been my first season at the Fever and it felt too easy. I remember saying that to Mum, and God, did I regret it because it took so many years to get back in. And then when I debuted in 2015 it didn’t feel like it was mine either. Both times I felt I was there because Renae (Ingles) was either injured or pregnant. This was the first time I felt like I’d actually made it on merit.”

Whenever a new national team is announced, unsuccessful players can ask for feedback. Every time her name was missing, Ash asked Lisa Alexander, the national coach, where she needed to improve. “Lisa told me that people outside the squad just don’t do that. But I did it every year. I was thinking that if she was saying no to me, she had to front up as much as I did.”

“To be honest, there’s been times, particularly last year, when I didn’t want to have that conversation and I couldn’t see the point. I’d had two of the best seasons of my life, and I felt that if I couldn’t break in for the World Cup year, I’m never going to be in. I’d always held out a little bit of hope before that, but I thought that was it for the Diamonds.” 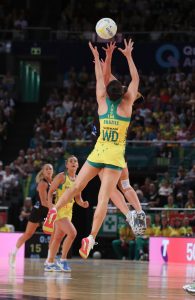 From teammates to fans, there were so many people wondering why Ash wasn’t being selected, and her frustration reached tipping point. “The hardest thing was seeing how much hurt it brought to my family. I was trying to balance that without letting it affect me too much. The best thing that happened was that Rob Wright sat me down last year when he was assistant coach.”

He said, ‘It is what it is, and you can’t change it. You need to get better. Let’s work so hard that the selectors can’t say no to you.’ When someone in my life says something like that, I think, ‘Great, let’s do it.’ That’s all it takes, one person to believe in you, and anything is possible.”

Rob’s words took the pressure off. Ash explained, “Having Brooke hear that, it calmed her down. It calmed everyone down. We were all in it together and it was no longer just my battle, it was all of ours. So, when I was selected this year, it felt like it was his win as much as mine, and I mean that from the bottom of my heart. Brooke was in a meeting at the time, so he was the first person I told.”

While Ash feels like her previous two years were better, a move from wing defence into centre midway through the 2019 season perhaps tipped the balance in her favour. The national team values versatility, and for the Magpies Ash fed the shooting circle impeccably, while remaining as defensively strong as ever. Her ability to turn a game by pulling in crucial intercepts could be an x factor in a Diamonds’ team that has walked away from the last two pinnacle events with silver. 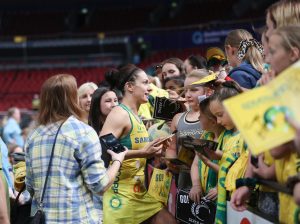 While Ash has only been capped four times since her first selection eight years ago, she’s remained philosophical. “I do think things happen for a reason, and I wasn’t ready earlier. Even being at Diamonds’ training now feels completely different. Walking in four years ago I felt like I couldn’t breathe. I was too nervous to speak up. Lisa scared me, and I didn’t know how to respond to her.”

“Now I’ve got a baby on the way, I’m playing football for Collingwood, playing netty for Collingwood, I’m growing up and almost 30, I’ve finally realised netball is just a game. Yes, I’m representing the country, but it’s still just netball. So I don’t hype it up too much because that’s when I lose my game.”

“We’ve tried to change my game a fair few times, but hopefully it’s there now and I can hold onto the opportunity with two hands and be there for as long as I can.”

While Ash’s sporting profile has never been higher, impending motherhood is keeping her balanced. More than three years after starting the IVF process, her wife Brooke is pregnant and expecting on Boxing Day. Like Ash’s Australian selection, it’s been a long, tough haul.

“Brooke’s had a few miscarriages and an ectopic pregnancy as well, so there’s been some incredible highs and lows. There’s been times when I’ve shut down, and when Brooke’s shut down, but we haven’t done it at the same time. As soon as it (a miscarriage) happens you have to take a couple of months off before you go again, and Brooke’s been counting down the days before we can have another crack. This little one’s doing really well, so finding out we were pregnant this time round was exciting but nerve-racking because we’ve been excited a few times before.”

“To see Brooke go through operation after operation and have shit results, she’s been incredible. One of the reasons I fell in love with her is that she is the strongest person I know.” 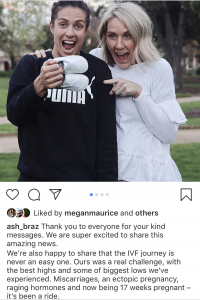 Ash and Brooke announce their pregnancy, shining a light on the fertility battle that some people face. Copied, with permission, from Ash Brazill’s Instagram account

When Ash and Brooke announced their pregnancy earlier this year, they had no idea how special their story was to so many people. She said, “When we announced that we were pregnant and how hard it’s been, the response was amazing. I had messages upon messages, people telling me about their journey, how hard it’s been, that they were going to give up but now they’re going to go again because they’d seen our story.”

“You don’t understand the impact it has. Even if our story was to help just one person, that’s enough. That was also my motto about being open and honest about my and Brooke’s relationship. I take it back to when I was a kid and struggling to come out, and there was no one to look up to. If it helps one kid to be more comfortable with who they are, that’s one more than there was. ”

“Athletes used to believe that they had to be fiercely competitive and strong, but the world’s changed now and it’s okay to be human. I’ve always struggled with people only knowing me as the athlete. I don’t want that.”

When 2019 comes to a close, Ash will hopefully have represented Australia with distinction and be the mother of a beautiful, healthy child. Just as importantly, by sharing stories about her perseverance, her sexuality, and her and Brooke’s challenging road to motherhood, she’s given people hope and inspiration. As she said of her coach Rob Wright, “That’s all it takes, one person to believe in you, and anything is possible.”