Australian goal shooter, Kim Borger has established herself as a Blue and Gold favourite amongst Team Bath fans. In 2019, the former Australian 21/under athlete was named as players’, coaches’ and fans’ player of the year following an outstanding debut season. In 2021 the praises continued with Borger recently achieving players player of the year. The Netball Show spoke to her ahead of her return home to Australia:

Borger was modest in her acceptance of the award, “I think players player is quite a special award because it actually comes from your peers and the people that you’re around.  I don’t know what it is honestly, and I’ve got no idea what it is that I actually do to get those things, but I’m really proud and I’m quite humbled.”

For many goal shooters, maintaining accuracy above 90% is quite hard. But, during the 2021 Vitality Netball Superleague, Borger maintained consistency of 93%, earning her the award of the most accurate shooter in the league. This is praise which she will quite proudly accept.

“Yeah, I’m really happy with that stat. Our lovely video analysis team was telling me. I was a super green by the way they draw their stats. So for me, that’s amazing and I think there was only a couple of times that I sort of dipped below my standard I guess.

“Across Team Bath we’re expecting our shots to be 85% or above. But for me this year I set myself a target of 90% and I think there were maybe two or three games that I didn’t hit that target, so you know what, I’m pretty proud of that stat as well. Because, I mean, I’m not even six foot – so its nine times out of 10 my defenders all around me say I’m not bad for an old girl.” 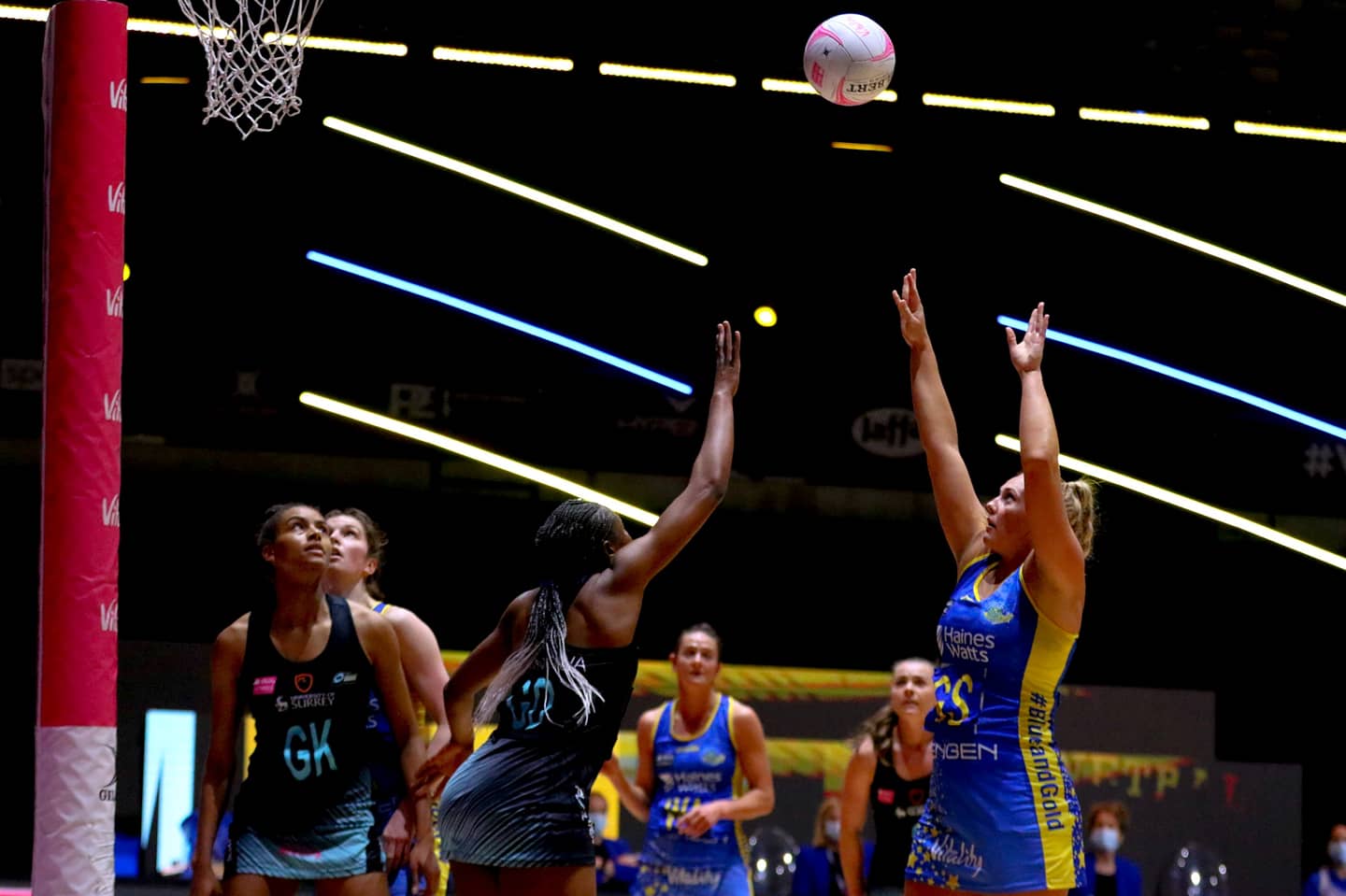 2021 was a season like no other for all the Vitality Super League clubs. Team Bath finished second overall and Borger wears some of that disappointment on her shoulders.

“I’m super proud of the girls. But you know, I would be disappointed that I couldn’t bring it home for them. I know I’m not obviously to blame because it is a team sport, but you know, as a leader, you sort of feel like that you have underachieved and being able to lead your team to victory I guess. So, I am very disappointed that we haven’t got it.  After the season that we’ve had to have bubbles and to not being able to see everybody. I think I’m up to like 38 COVID tests this season, since arriving over here.

“It’s a hell of an achievement and not just for our team, but for all the clubs as well. Because it was hard with all the travel and the commitment that each club and franchise had to make. This was as well as the personal sacrifices and the players so not only am I proud of my girls, but I’m proud. I’m proud of the league and netball as a general and how we’ve been able to handle the situation at hand.”

This season saw a raise in the standard of competition and some very close games. When asked who Borger thought her toughest opponent was, she couldn’t settle on just one.

“There’s some tough sort of lineups out there, and we obviously seem to have struggled with Mavs. Having lost to them both times and they had quite a good strong unit in there as well that covers a range of different skills. Lightning too they’ve got quite a number of different defenders that can slot in there and change things up with how they play.”

But she had no trouble choosing a highlight:

“ Yeah, yeah, I mean to beat Thunder three times this season, it was pretty amazing and in the way we sort of went about it as well. There was that game where we just came out of the blocks absolutely firing, and I mean who beats a Thunder side by 25 goals? Like that’s very rarely heard of.”

“It’s been a fantastic season and as much as it was a bit in doubt about whether I’d come over with COVID and stuff, but I’m glad that I left the safety of my small town home two weeks before Christmas to endure three months of lockdown to the season. It was great.” 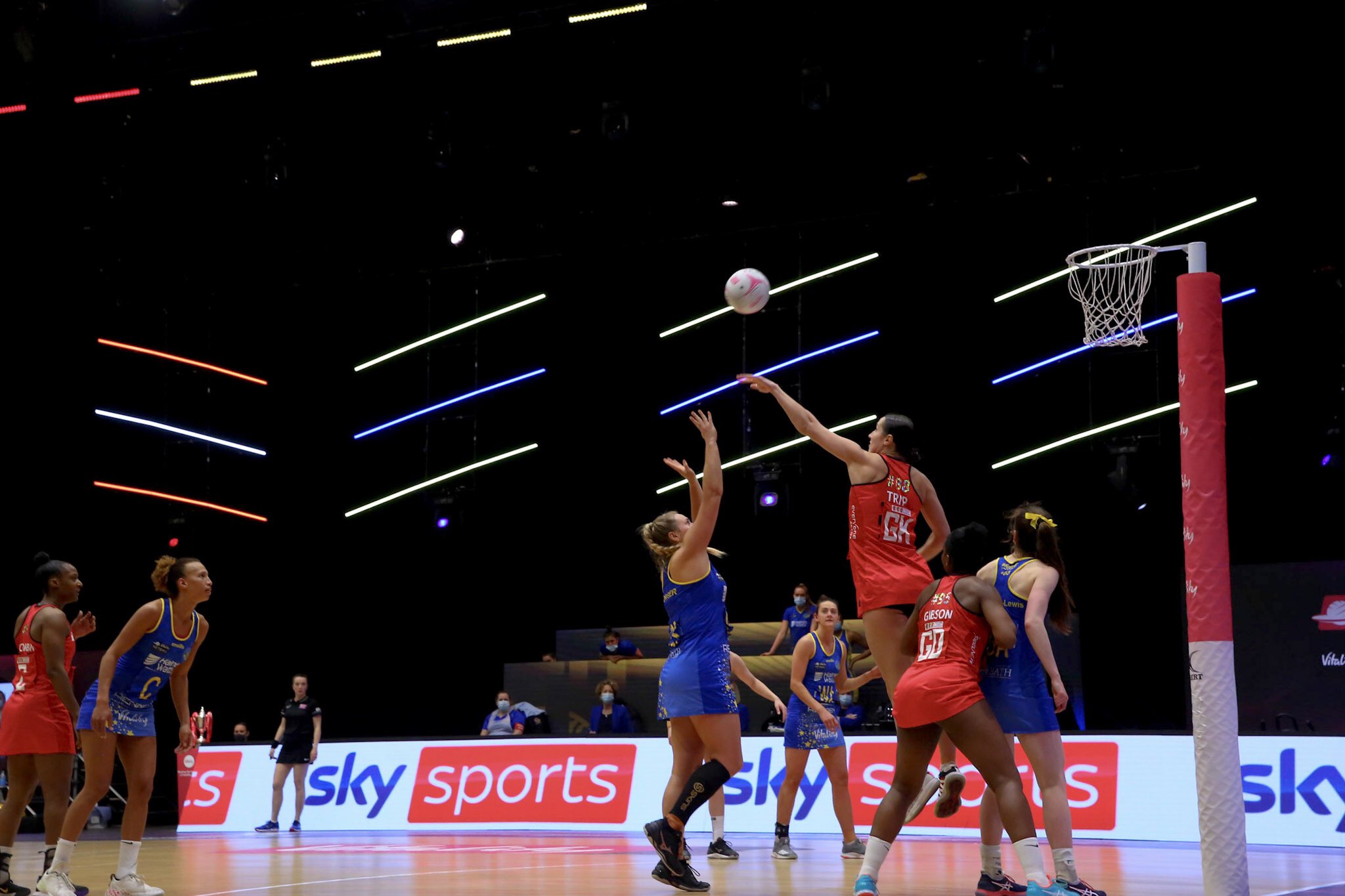 Team Bath was helmed by Anna Stembridge and Jo Vann this year. The coaches brought different styles which Bolger loved.

“They’re very different coaches. I mean both absolutely superstars in their own right, Anna is so technical with how she does things and she knows the game inside and out. Jo is just this like breath of fresh air and she just really sees things outside the box and has like a different view on things so It’s actually quite nice and they compliment each other quite well.”

Now on her way home to Australia for a well-deserved break, Borger will be bringing a bit of Team Bath with her. In lieu of traditional trophies this year, awards were presented as necklaces. For Borger, this was a welcome change from tradition.

“We decided to sort of go down a different path rather than a standard trophy, which are lovely by the way, but it’s a bit more personal and we can sort of wear and have like our little Team Bath sort of with us. Uhm, so it’s got the two colours are blue and gold and it’s got Team Bath 2021 engraved on it as well.”

To hear more from Kim, including her thoughts on if she is looking at a return to the Vitality Netball Superleague, listen to The Netball Show Podcast.