By Brigid McNeill and Jaimie Keay

The Trident Homes Tactix have been a team on the rise since the appointment of Marianne Delaney-Hoshek as head coach in 2018, and in the last two years, she’s taken the team to consecutive ANZ championship finals.  However, significant player movement means there are new waters for the Tactix to navigate this season. Netball Scoop chatted with the star coach to get her view of the season ahead and the promising state of grassroots netball in the Canterbury region. Oh, and it wouldn’t be a chat about Mainland netball without discussing those die-hard Canterbury supporters.

There must be some temptation for Delaney-Hoshek to stay with a similar coaching formula given the team were a mere two goals away from the championship title in 2021. The coach is clear, however, that there will be a change in attacking approach this season. “We’re wanting to play with more urgency and wanting to score a bit quicker” says Delaney-Hoshek.

The success of the faster style will depend on excellent physical conditioning across the squad, something that the team has been working hard on. “Having a close loss last year, you really want it and you want to do anything possible. The girls came in fitter. You will see a higher level of fitness in this group” (compared to previous years).

The absence of Jane Watson (parental leave) also necessitates a change of leadership and a shake-up in the defensive end of the court. Look to new captain Kimiora Poi to lead by example on and off the court. “She puts in 150% at training, she’s not a loud talker but what she does say is needed”. Delaney-Hoshek also speaks highly of Poi’s team focus. “Everything is about the team” (with Poi) “She has a real caring side with people”.

Delaney-Hoshek acknowledges that new defensive combinations usually take a while to form but is happy with the progress thus far. She talks excitedly about the physical defensive style that Kalera Nawai-Caucau brings against holding shooters, while the return of Kate Lloyd after being dropped from the team is also a keen talking point for the coach “She’s worked really hard to come back and she really wants it and you can really see it with the way she’s playing”. Even so, there will be a lot of expectation placed on the shoulders of 2021 ANZ Player of the Year Karin Burger to lead the defensive end of the court this season.

Cover for the wing attack position has also been a talking point following the departure of Erikana Pedersen. Delaney-Hoshek offers unique insight here by sharing that training partner Parris Patera will likely get a run early in the season. “You don’t notice a difference when she’s (Parris) is on and we’re calling her mini-Mons” (referring to Tactix mid-courter Samon Nathan). Newcomer Vika Koloto has also been sliding from the GA to WA role during pre-season to offer the team more flexibility down the attack end. 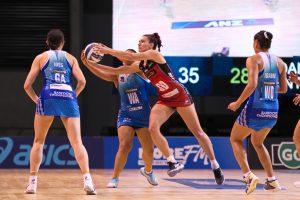 Netball Scoop voted Karin Burger as the ANZ Championships MVP in 2021, and she will again play a big role in 2022. photo Steve McLeod

There is a distinctively Canterbury feel to the Tactix this year with half the squad playing secondary school netball in the region. It appears that Mainland Netball’s focus on nurturing home grown players to come through to the elite level is really paying off. Delaney-Hoshek highlights the quality of coaching in the secondary school system in the region as pivotal to this success.

In 2021, three Mainland players were selected for the national Secondary School team.  Interestingly, Delaney-Hoshek also pinpoints the fitness levels of secondary school players in the mainland region as a key factor in their growing representation in the national team.  “I feel like with the fitness criteria – they’re really starting to look at our girls more”.

The importance of nurturing talent within the mainland system is also shown by Delaney-Hoshek’s selection of three players from the second tier National Netball League (NNL) competition into the Tactix squad this year. “We’re one of the only teams that have taken players from our NNL team. You’re taking a risk in some ways, but I think it’s really exciting”.

The appointment of Tania Hoffman as assistant coach of the Tactix, whilst also holding the reins of the NNL team, will help ease the transition between these teams. “We had Jules (Julie Seymour) over the two programmes last year and quite a few years ago I was across the two as well” says Delenay-Hoshek.

“We found the model was better because you can use the same languaging and the same structures so the transitions up and down the two teams are seamless”. This ease of transition between the two programmes is likely to be even more important in 2022 with COVID potentially disrupting player availability through the season.

COVID-19 restrictions will also mean the Tactix will be without their record breaking crowds for at least the start of the season. Delaney-Hoshek reflected on the special feeling that a packed Tactix stadium, filled with supporters dressed up in red and black, gave her last year . “I sat with Julie Seymour and I was looking out and going 4 years ago could you have imagined this?” The comment is also reflective of just how far the Tactix have come during Delaney-Hoshek’s tenure with the side.

Given the important milestone of 25 years of semi-professional netball in New Zealand,  Delaney-Hoshek reflected on the most noticeable changes in the sport over that time. “One of the biggest things is the amount of conditioning and how fit the players are”, she says.

Delaney-Hoshek is positive about the journey New Zealand’s elite netball league has taken in contrast to the changes that have been made to the rules of the game in the Australian national league. “It’s been positive that we’ve stuck to our league. I’m pleased we stayed true to pure netball”.

And as for where she’d like to see New Zealand netball go in the future? “I think we’re going in the right direction. Obviously space marking is our New Zealand style. It would be good for all teams to learn at least an element of that because when you play internationally, it’s a point of difference” 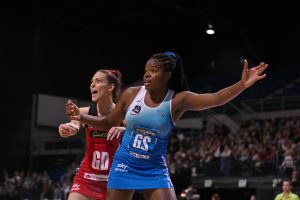 In the absence of Jane Watson (maternity leave) Karin Burger will be the wise head in Tactix’ defensive end. Photo: Steve McLeod

After finishing runners-up the last two seasons, the Tactix host their southern rivals the Steel tomorrow afternoon and ask new captain Kimiora Poi how she is feeling – “excited”.

In her fifth season with the Christchurch-based franchise, Poi has been handed the captaincy role for season 2022 after Jane Watson announced she is expecting her first child at the end of May.

“I am excited, if I was to think back a couple of weeks ago I was a bit nervous, just about everything going on, and i’m like oh shoot i’m actually a captain, but yeah i’m excited, the girls around me have sorta made it easy. Everyone is stepping up just with little jobs, and over the last few weeks training hard and now i’m excited for the weekend and to finally get playing.

When coach Marianne Delaney-Hoshek gave Poi the word she was leading the team this season, it was definitely unexpected.

“Very much a surprise, I never ever saw myself as a captain, and I guess one of the reasons for that is and I guess right now, I’m not the most experienced player in our team and I’m not the oldest and I think it is such a special thing to be given. Not every netballer is going to be a captain of an ANZ Premiership team, so it’s such a special role to be given and I’m taking it with both arms and I’m ready to just get out there and give it my all and just do it.

With 2022 seeing new and old faces returning to the Tactix, Poi said that each have brought their different flavours to the team.

“Vika (Koloto) brings a ball of energy, she is always singing and always dancing and then when she gets onto the court, just is just that fast drive into the circle and she’s not afraid to put those shots up.

“Lloydy (Kate Lloyd) and Han (Glen) they are new this year but they have been in and out of the environment and so it doesn’t feel like they are new so they have both fitted back in really easily.

“While Layla (Kalera Nawai-Caucau) she brings that strength and that ability to attack ball outside the circle on defence. I am really excited to see all the girls in the red dress and ready to go this weekend”.

About the Author: Brig McNeill