Professional sport is a tough world to be in at any level. The demands on athletes are enormous – historically, being a mother and a professional sports person was rare. Now, inspirational athletes such as Rebecca Bulley, Renae Ingles and new mums Gretel Bueta and Kim Ravaillion are returning to netball. Balancing both an elite athletic career with motherhood has become the norm but what about coaching?

For many of us, the balance between motherhood and work is never easy. With crazy schedules, after school activities, clingy toddlers, sleep deprivation, and a household to manage it’s hard to give one hundred percent focus to a career, but professional coaching adds an extra complication to an already full plate.

Megan Anderson a former professional netballer, Commonwealth Games athlete and head coach of the Queensland Firebirds knows the juggle well. Anderson spent six years in the national squad and was part of Australia’s silver medal side at the 2006 Commonwealth Games in Melbourne. She is also mum to six-year-old twins Thomas and Olivia.

The preparation required prior to a match, as well as game day itself, requires a coaching commitment of more than the standard 38 hour work week. Multiple court and gym sessions, planning, opposition analysis, travel for interstate games, post game analysis, media commitments and club administration are all part of the coaching balance that can push upwards of 60 hours a week. 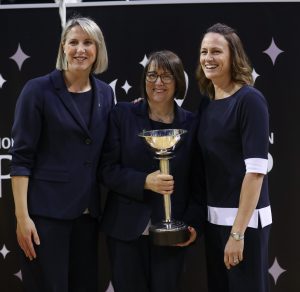 Clare Ferguson, Lisa Alexander and Megan Anderson after the Diamonds 2018 Constellation Cup victory. The role required a lot of travel, and as a mother of young children it added challenges for Anderson. Image May Bailey

Anderson knows what it’s like to juggle the expectations of both family and an even bigger netball family.

‘Anyone with kids knows how hard it can be to find the balance between work/a career/family life, and careers that don’t follow a nine to five schedule can make it tough.’

‘When the twins were young I had a nanny; as between the game days and training it doesn’t fit with typical child care hours.’ said Anderson.

‘I picked my coaching jobs with my children in mind, as when I was a player I felt I had sacrificed so much family time and time with loved ones, that when I became a coach I didn’t want to be away from my kids while they were still so young.’

‘When you are starting in your coaching there is a lot of unpaid work, predominantly on weekends and nights, and you still need to work full time to support your family, and this was something I wasn’t willing to do early in my career so, I was a bit fussy in what I chose to take on.’

‘This affected the journey and I didn’t get as much experience as other coaches early on, but my playing experience, along with the continued education through the Netball Australia Accreditation pathway helped me get to the position I am today.’

Now that Anderson’s children are older it has meant that some pressure of out of hours work is relieved.

‘With the twins being in Year One now, they are at school all week, and they are old enough that they understand my job and the travel involved, and are able cope with me being away during the season.’ 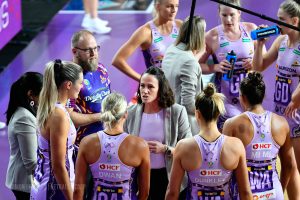 Mum to one and a half year old Matthew, Marinkovich took her son with her when the 2020 season moved to a hub in Queensland due to the Coronavirus pandemic.

‘I didn’t realise what an impact he would have on our team with him joining the hub. He provided that sense of family and connection with the girls, who were away from home for more than 80 days’.

‘It gave the team an avenue to detach from netball, and living in a hub life it was easy to get wrapped up into netball 24/7.’

‘He also loved every minute of it!’

The combination of motherhood and hub life shaped both Marinkovich and her team. ‘I have had to evolve my thinking of what professionalism as a coach looks like, and while previously it was the expectation to immerse yourself in netball while training, the hub allowed a combination of family life and netball, which was embraced by the team, especially when away from home.’

‘This meant that I didn’t have to keep my family world separate. Players want to see who you are, it helps you be authentic and keep life balance.’ 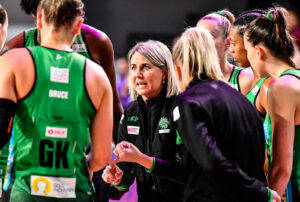 Rather than a distraction, a coach with children is now being seen as an attraction to the team. With more players returning to the game after children, it shows that time away from the game is not a career ending move.

With two new mums in the playing group and both assistant coaches also having children, Anderson uses her family experience to bring another facet to her coaching.

‘’Being a mum myself makes me more empathetic. As a player I was very motivated, and put netball first, and when I first went into coaching I expected players to do the same.’

‘Motherhood has made me more aware of the player as a whole person and how their life outside netball can shape their time on the court.’

‘I understand sometimes as a mum you can be having a terrible day, and my players are honest with me and open about this and I am sympathetic and flexible to help them to get the best from them both on and off the court.’

‘We love having kids around and the family atmosphere at the club brings such an enjoyable vibe for the players and the staff. We manage our training schedule to be flexible to suit our netballers as people, and their needs outside netball, be that work/study or parenting.’ 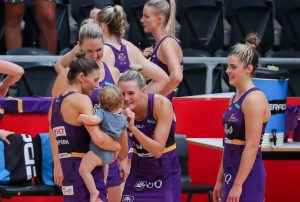 Kim Ravaillion’s daughter, Georgie, is a firm favourite with the Firebirds. Image May Bailey 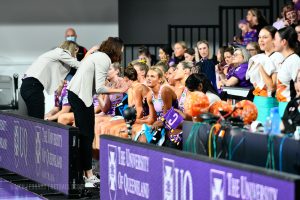 Worldwide, there are chronically low numbers of women coaches and women in leadership positions in the sporting arena.

Netball is one of the only Australian sports that has female head coaches, many with children, at the elite level.

Netball Australia has a focus to improve the development pathways and opportunities for female coaches, which has seen a great deal of support for both athletes and coaches to successfully manage both family and club life.

It is worth noting that the Collective Players Agreement includes details of players maternity leave, however, there is not a similar agreement that covers coaches and training staff.

Individual coaches and their clubs negotiate maternity and parenthood clauses as required.

‘Similar to the players there are clauses in our contracts that support family life by allowing young children to travel with you, and different clubs put different measures around the training environment to support motherhood and coaching,’ said Marinkovich.

‘It is still a work in progress to improve the life balance, areas such as changing hours to reflect full time work, and not coaching outside of those so a child can go to traditional childcare, is an area that could be evolved.’

‘We want the best people and the best skills in coaching roles but that also has to come with balance and flexibility in the programming.’

Women with children often face queries about how they can put in the time to be a senior coach and be a mother, but netball is paving the way for women’s sport and elite coaching to inspire and encourage the next generation of women to come and take it forward.

Marinkovich believes that her experience as a mum brings more to her coaching than just time management and multitasking.

‘I’ve found that motherhood brings perspective to the game. Sport is highly emotive and being a mother can bring an emotional balance to the highs and lows, and from my experience having that balance has allowed me to coach with more clarity’. 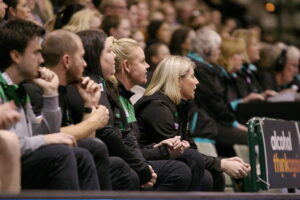 Stacey Marinkovich has found that motherhood has added a sense of balance to her life and to her coaching. Image Steve McLeod.