The final Constellation Cup match of 2019 was full of extraordinary milestones, but marred by one of the most inconsistent umpiring performances in recent memory. Noeline Taurua, normally the most composed of coaches, made an emotional plea after the game for conditions to be improved.

And so they should. The cauldron-like intensity of an Australia-New Zealand clash is no place for the faint hearted, and such magnificent athletes deserve far better than what they received on the day. Confusion reigned from the outset, with players and support staff from both sides often baffled at the calls.

Umpiring aside, it was a day to celebrate. Caitlin Thwaites was playing her last international for Australia, Diamonds’ captain Caitlin Bassett reached her 100th game, while Silver Ferns great Maria Folau notched her 150th. Given all the speculation about her retirement, it’s quite possibly the last time the silky smooth shooter will be gracing an Aussie netball court. Netball fans, led by a scarf waving Australian prime minister, were in a vocal mood as they packed Perth Arena to the rafters, preparing for another trans-Tasman feast. 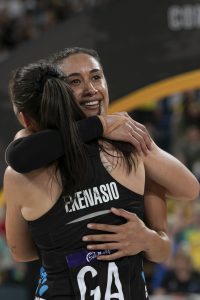 Maria Folau – one of the greatest Silver Ferns of all time. Image Mia Mammoliti (clixbymia) 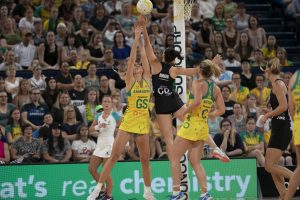 The equation was simple; whichever team won the match hoisted the Constellation Cup. With New Zealand’s recent resurgence, few were prepared to gamble on the result, but it was Australia that charged out to a comfortable lead in the first quarter. The Australians implemented a simple game plan: up and over. With Bassett and Gretel Tippett exploiting a 14cm and 8cm height advantage over their respective opponents, a well placed lob was the order of the day. It was the duo’s most polished performance together as they racked up 16 goals for the quarter.

At the opposite end of the court it was a shocking start for the Silver Ferns. Bailey Mes had earned the start at goal shooter, courtesy of Ameliaranne Ekenasio’s last minute flight to Perth, but she was punished by the umpires for offensive contacts and didn’t last long before being replaced. While there were some baffling calls against the Silver Ferns, they also made some basic errors that persisted throughout the match.

As Australia started to extend their margin, two of their least capped players were starring. Ash Brazill at wing defence was not only smothering Gina Crampton, and providing an outlet in attack, but used her speed to haul in two intercepts and six deflections in an MVP performance. Laura Scherian was composed under the pressure of Katrina Rore, finding good space at the circle edge and dropping passes into her goaler’s outstretched fingertips. 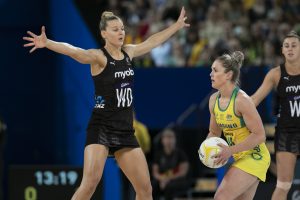 Having established a nine goal lead at quarter time, the Diamonds continued to extend their margin by up to 16 goals in the second. The Tippett/Bassett combination was as fluid as it’s ever looked, with the latter playing one of her best games in the last 12 months, taking the ball strongly in the air despite some close attention.

Needing more height to combat the Australian twin towers, the Silver Ferns introduced Phoenix Karaka at goal keeper in place of Jane Watson, with immediate impact on the high ball. However the Australians changed their game up, with Tippett mixing up a speedy front cut with her hold for a lob.

A hallmark of the Taurua coached Silver Ferns is their enormous mental resilience. Towards the end of the second quarter they started to reduce the margin, taking momentum into the rest of the game and hoping to take advantage of Australia’s concerning second half fadeouts – they’ve won the third quarter just twice in the last nine matches against New Zealand, and the fourth quarter just three times.

Thwaites was introduced at goal shooter after half time, to the delight of the crowd. While she was moving smoothly or holding strongly, it didn’t suit the aerial game style the Australians had been playing and the midcourters had some difficulty in feeding ball into the circle. That along with increased intensity from the Silver Ferns held Australia to their second lowest scoring quarter of the entire series. 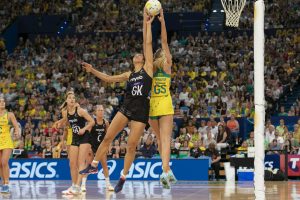 At the opposite end Folau and Ekenasio sorted themselves out. The latter, having put up just three goals since the first quarter, became more available with some better circle positioning and outstanding rebounding over Courtney Bruce. Folau’s long range shot was continuing to find it’s mark, despite some strong attention from Bruce and Jo Weston.

With Australia faltering, Jamie-Lee Price was introduced to wing defence, pushing Brazill into centre and giving Liz Watson a well-earned break on the bench. Maddy Turner moved into goal defence, making her debut for the Diamonds. Her lean over the shot immediately forced Folau into a held ball, and Turner followed it up in the fourth quarter with an outstanding intercept.

The matchup between Brazill and Laura Langman is one that fans have been thirsting for all series and it didn’t disappoint. Langman had less space to play in than usual, and the two matched each other for speed and sheer athleticism. While her centre passes need some refinement, Brazill’s feeds into the circle were precise, and she certainly did enough to show that she’s a long term prospect for the Diamonds. 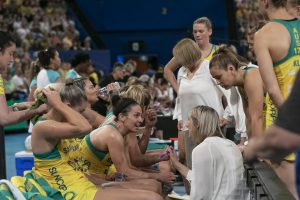 It was far from Langman’s best game – producing an almost unheard of 11 turnovers – but she continued to urge her team on as the gap narrowed to just four goals. Karaka and Karin Burger – perhaps New Zealand’s best – forced some timely turnovers which were often converted at the other end. With Folau increasingly reluctant to go the post from range under pressure, it was left for Ekenasio to keep the scoreboard ticking over.

It was an almighty effort to come back from 16 goals down, but the margin proved to be a bridge too far for the Silver Ferns. Australia held their nerve – something they’ve struggled with recently – and ran out seven goal winners to hang onto the Constellation Cup. 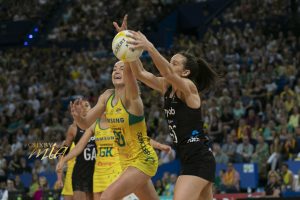 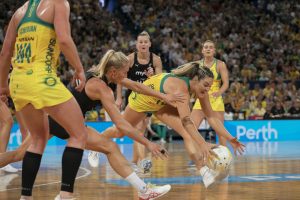 Looking at third and fourth quarters, Australia have won just three of fourteen quarters in their last seven matches against New Zealand. There’s a host of factors most likely at work, which include greater use of the bench, less on court experience, and re-establishing leadership across each sector of the court.

It’s a concerning trend, and one which Australia will need to address moving forwards. Mental resilience, the habit of winning close games, and self belief are all intangibles that have been hall marks of the Diamonds, so hopefully the new crop of players will take up the baton.

While she’s yielded court time to Caitlin Bassett for much of her 55 game career, Caitlin Thwaites will go down in history as one of the most-loved Diamonds. Her team-first mentality, courage in speaking out about her mental health, and ability under the post have all been hallmarks of her career. While Thwaites will continue to play domestically, Netball Scoop salutes her contribution to Australian netball, and would like to wish her all the best in the future.

Speculation still swirls over Maria Folau’s future, but given that she hasn’t signed to play domestic netball in 2020, it’s hard to see her international career continuing much longer. During her 150 tests for New Zealand she’s been the stalwart of their shooting circle, combining longevity with one of the most beautiful shooting styles seen in netball. If this is it for Folau, fans have been privileged to see a once in a generation shooter at work. 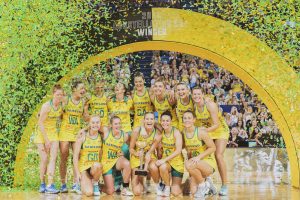 On bringing Caitlin Thwaites on: “We bought Caity on just to give us a bit more movement there and a bit of a change up and she did a great job, we just got stuck on the transverse line. I think Lizzy (Watson) just got a bit tired in centre and Braz was just enormous today.”

When the margin tightened up in the last quarter. “I just got that feeling that they weren’t going to let it slip. We’d practiced it all week. They just dug in, they dug really deep and I think they did a fantastic job.”

On the team coaching themselves on Tuesday, Rick Charlesworth style: “It gave the group confidence. That’s what Lisa’s really good at, empowering the players and we know what to do. Yes, it’s great to have experience and elite coaches telling you what to do, but when you’re out on court you actually can’t, you can’t be running to the sideline constantly and asking what to do, you’ve got to work it out yourself and within your teammates.”

How she and Caitlin have pushed each other in their generation. “Bass and I have had such a great relationship in terms of pushing each other. I know I’ve been nipping at her heels for quite a while. I hope that’s inspired her and pushed her on to get better, and I know that’s been exactly the case for me to be pushing and stick my hand up, and make it really hard for Lisa to be able to make that decision. I think that’s great for the team to be putting our best out there and challenging each other and the team reaps the rewards of that.”

On her disappointment with the umpiring today. “There’s areas that we will definitely own in regard to ball that’s been coughed up, but I’ve actually looked at the stats in regards to the penalty count.”

“Penalties, over the last three games, we’ve played the same style, so we had to adjust and we did adjust. It doesn’t make sense that we get a new umpire coming in, who’s just got off the plane who hasn’t been here for the past four tests. It just doesn’t make sense. What are we trying to do with our game? We want to put something out there that’s really competitive. But these decisions that are made behind the scenes in regards to that, and that quality is unacceptable. For that, I’m really disappointed. I take it that we lost, and lost to a better team, but it could have been more competitive than what happened out on court.”

“The most disappointing thing is that we didn’t give the fourth test what it deserved, which is the competitiveness out there. I will put up our hand. I thought the Diamonds were amazing. I thought  in that attacking end it’s the best I’ve ever seen.”

On Maria Folau “She’s one of a million in regards to her style and her shooting prowess. I think you get to that stage where you people can name legends of the game, and I think Maria is one of them.”

The difference Noeline Taurua has made in the Silver Ferns’ mental and physical resilience. “I was bought into the environment quite late, before the World Cup, and as soon as I walked in the belief that Noels has in the players and what we’re capable of giving to each other is amazing. When you’ve got a coach that can believe in your strengths and your abilities it really gives you that positive outlook on yourself and that courage to go for the ball that you think you’re second guessing. In my head, she’s that person that’s like, ‘Go, go, go.’ If you’re going to go, go hard.”

“We’ve really banded together as a team, sorted out what our values are as a team, really worked hard on making sure that’s the benchmark and not going any less than what we gave at the World Cup.” 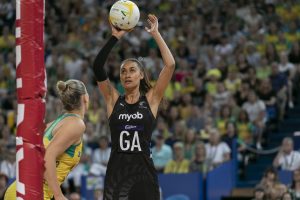