Lockdown, loss and these Covid-crazy times are draining, so when a feel-good netball story popped up on our radar, Netball Scoop couldn’t wait to share it with you. A huge thank you to the Hastings Valley Netball Association and Peta Watters for some exceptional work behind the scenes, and to Dennis Turner for sharing his poetry.

Dennis Turner is 96 years old. On a Saturday, perched in the eyrie of his aged care home, he catches glimpses of the bustling local netball courts, spliced neatly into their verdant surroundings. A rhapsody of whistles, loudspeaker crackles, and “Here if you need!” drifts up to his waiting ears.

For thirty years Mr Turner has lived in close proximity to the Hastings Valley Netball Association in Port Macquarie, firstly in his own home, and more recently in supported living. The local courts have changed over time, Mr Turner explained. “They used to be grass, and when it rained, the netballers couldn’t play for a while until they dried out.”

His daily walk of 40 to 60 minutes passes by the courts, but Saturday matches are particularly special to him. Mr Turner said, “It’s the ambience. I can hear the children laughing and chatting together, and I’ve seen the enormous amount of work the volunteers put into running their games.

“I wanted to try and capture how that makes me feel. I don’t go to work anymore as I’m getting a bit long in the tooth, but I do love putting pen to paper.” 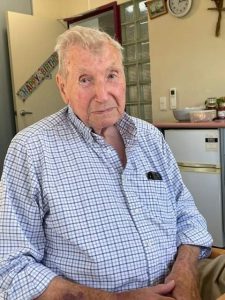 Mr Turner joked that his only literary claim to fame is, “My great grandmother was born next door to the house that Anne Hathaway lived in.” And while he may not have drawn inspiration directly from the great bard himself, Mr Turner has always loved poetry.

In the earlier days, he wrote for his wife, with whom he and his three sons emigrated to Australia. As his family grew – Mr Turner now has eight grandchildren and 16 great grandchildren – so did the family’s demand for his work.

“It’s just a hobby, but I do enjoy writing poetry. I write down my thoughts, then I think about them, then I change them slightly. I don’t just sit and write a poem and that’s it, it’s ongoing.” 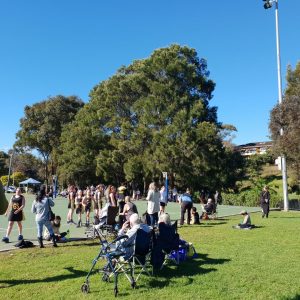 After 74 years of married life, Mr Turner’s wife passed away a couple of years ago. It’s been a sad loss, but his enthusiasm for life hasn’t wavered. Mr Turner still walks the paths they shared, nowadays with a companion, and occasionally watches as the matches unfold.

Hunters Valley Netball Association make him welcome, and on a sunny day, he’s been spotted soaking up the competition from a deck chair. In a tribute to the atmosphere, enthusiasm and passion of grass roots netball, Mr Turner wrote the following poem.

The girls are there.

It’s a pleasure for me once a week

For away down the hill and across the creek

Young netballers are playing their game

Cheers and mirth from all, it’s the same.

The families are there with eats and flasks of coffee and tea,

All are there to experience the jollity.

For this is sport of it’s very best,

Not a job of work like some spiteful quest.

If only I could bottle all this goodwill and mirth,

I could spread it around and improve the earth.

For this is what is needed of the human race,

Somebody to bring a smile to everyone’s face.

And for those who would give it a thought,

By our children we will be taught.

Hunter Valley Netball Association posted the poem on their Facebook page, and it’s been reproduced here with Mr Turner’s kind permission. With it’s connection to netball, and wider sentiments about why sport is so important in life, we hope you enjoy it as much as everyone who has read it so far. 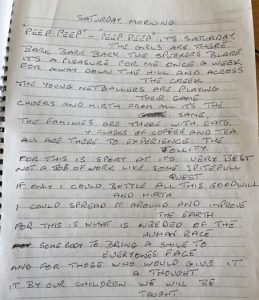 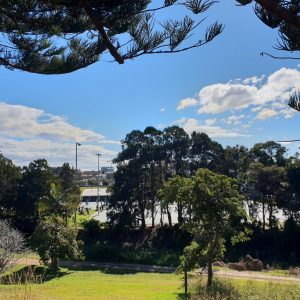