In this two part series, Netball Scoop chatted to five Australian Diamonds about all things Commonwealth Games, and a look ahead at the lead into the 2023 Netball World Cup. Captain Liz Watson and Paige Hadley feature in Part One.

As one of the premier midcourters in the world, Diamonds captain Liz Watson prefers to let her play do the talking. And while she led Australia to success at the Commonwealth Games through a series of striking performances, a big part of her focus is what happens off court. She and vice-captain Steph Wood have ushered in a new era for Australian netball, building a family-like atmosphere, and creating an environment that celebrates inclusion and diversity. 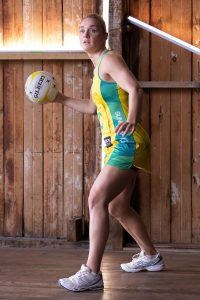 What was the key difference for Australia in your success at the Commonwealth Games?

“We had a really good preparation. From the time Stacey (Marinkovich) came on as head coach we had a really clear direction and we weren’t afraid to talk about wanting to win that gold medal. Every tour we had, whether it was at camp, Constellation Cup or Quad Series, we were improving the whole time, and it clicked at the end.”

How do you define your role as captain?

“It was great to do it with Steph (Wood). I was trying to lead by example and do all the little things right, but this team is so great, everyone stepped up, everyone knew what their role was and played it really well. Even Paige (Hadley) who was injured had a really important role in winning that gold medal. Everyone had the drive. So it wasn’t all on Steph and I, it was a whole team effort.”

The Diamonds had a strong family environment at the games.

“I think they had more fun than us! We couldn’t go out and see them because we were in the bubble, so it was nice they had each other. They’d meet up before games, watch them and have that time together. They were also chatting on WhatsApp, setting up dinners, and it was a relaxed environment, with the kids along.

“We had a family environment, and knowing our loved ones were supporting us but also enjoying themselves made us relax and perform better on court.”

It must have been tough for the group when Paige Hadley was injured.

“She was doing extremely well, performing at training and then on court, but unfortunately it got worse. She did everything she could to get out on court, but even though she couldn’t, she was very important to the team. She’s such a selfless person, and she was obviously extremely hurt and devastated, but didn’t want to show that emotion in case it impacted the rest of us.”

What are the challenges for the rest of the team when you’re down a player and rotation?

“You are hurting for Paige at the start, but her mentality was that we needed to make it work. So we shared the load, shared the love, and put a lot of extra work into recovery to make sure we were all fresh. It probably made us more diligent knowing that we played extra court time than rotations had planned for.

“So to see players step up in different positions, and for longer minutes, was incredible. We were going to win that gold no matter what, even if we just had seven players available – we were so determined.”

How can Australia maintain it’s winning edge ahead of the Netball World Cup?

“The time we have together is very important. This training camp for example, introducing the new ones, potentially girls who haven’t debuted yet and to see what they can bring. It’s a really important time. And while we will hopefully meet again in January, we really do have limited time together and once Suncorp Super Netball season starts it flies by and we will back at the World Cup.

“We have to make the most of every minute we have together because it really does fly by.”

You haven’t played New Zealand since January. What are you expecting in the Constellation Cup?

“I’m a bit nervous. It’s exciting but we haven’t played them for a while, they are reshaping their team, some players are coming back and they have lots of strengths.

“Every time we play there’s that added rivalry. They were extremely proud and happy with their Commonwealth Games, but they are building and they want to beat us. We have the feeling of being the hunted, so it’s going to be a close tussle.”

There is limited time for national coaches and support staff to prepare their teams. How has that interaction been?

“Stacey (Marinkovich) has been super impressive – I think she’s amazing. She’s very diligent in the way she prepares. At the Comm Games for example, she, Richo (Nicole Richardson) and Gary (Dawson) our analyst had done so much work in getting the game plan right, the stats right, to make our job easier. I don’t think people realise how much is done behind the scenes to make it look effortless.

“They are also great at building the strengths of the players already in the team. And while the wins are great, the relaxed and comfortable atmosphere that we’ve all created, the family environment, all the players seem to have a good experience when they’re with us.”

Of the current Diamonds, Paige Hadley is the longest serving member, but has had a bumpy ride in the gold dress. An ACL injury and non-selection has seen her in and out of the team, and so it was particularly cruel that a calf injury kept her off court during the Commonwealth Games. However, her leadership and team-first approach was lauded by all, as she still played a significant role in Australia’s gold medal winning performance. 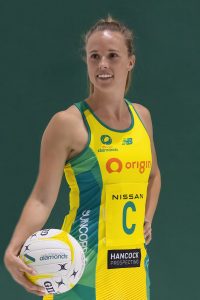 How challenging was the Commonwealth Games for you?

“Honestly, it was one of the hardest experiences that’s been thrown at me. I spoke to you before I went away, and said the Comm Games was a big dream that had eluded me for a while. So it feels like they aren’t meant to be my time on court. Really tough.

“I had about an hour of sobbing afterwards (following the South African game), then I said to myself, ‘Paige, either you’ve got to move on and be there for the girls and try everything you can to help them win gold, or you can sit here and pity yourself.’ It wasn’t a hard decision.

“It wasn’t how I dreamed of playing, but it was still one of the most amazing experiences. To have the belief of Stace (Marinkovich) and Richo (Nicole Richardson) and all the girls to be part of it was unbelievable.”

How did you continue to support the team?

“I did my rehab in my own time, so that when it was team time I was always there, whether it was at the training court or playing. Being the voice from the bench, I was fully able to absorb myself in that, calling out the five minute blocks that we focus on, or two, three, four goal runs. When you’re on the bench you’re so often going out to warm up, but I was able to be fully concentrated on the girls and being that 60 minute voice.

“Away from that, I love watching videos and our opposition. Playing England for example, I’ve played with a few of those girls, Jade Clarke, Nat Metcalf, Helen Housby, so being able to support the girls and especially Kate (Moloney) at centre – letting our girls know how I played different teams and scenarios.

“Trying to give as much as I could while also being an ear that could listen, especially after that loss against Jamaica, the voice of reason and not all doom and gloom.”

As a senior member of the team, how do you feel now compared to your younger self?

“When I was younger I didn’t believe that I deserved to be in the Diamonds. I was overawed by the experience of camps and World Cups.

“Going through what I’ve gone for, I’m grateful, I’ve been through a lot and I’ve had to work bloody hard to be here. It’s not going to go your way all the time, and I’ve had such a rollercoaster of a journey. But it’s believing I’m good enough, and I’ve done a lot of hard work both physically and mentally to be in this position.

“As I’ve grown older I feel more like I can be myself, and the Comm Games showed me that while I’d love to be on court, you can still impact and be a positive voice away from it. So for me, it’s believing I belong here, a part of these amazing and wonderful experiences.”

What are Australia’s strengths looking at the series against New Zealand and England.

“At the Comm Games, we hadn’t won a major tournament two cycles, and 99% of the crowd were against us.

“There was a lot of pressure on us to win. That takes a lot of guts and belief in each other.

“In this series ahead you will see the depth we are testing out. We have two different travelling parties. Some young ones and inexperienced ones will have the opportunity to build on combinations that are forming nicely. We have a lot of different strengths.”

“Playing in the best league in the world continually challenges us. We haven’t been able to really challenge the depth in our squad for a few years now with Covid, so the next 12 months is going to be all about that. It’s a long time in sport, and a lot can happen.

“So it’s about staying connected, keeping the combinations building and bringing all of us along the journey. The gold medal wasn’t won by the seven on court, or the 12 on the team, it was the whole extended squad pushing each camp to get in there.”

With the level of international experience you have, how do you support the younger athletes and debutantes?

“With my injury I was trying to get back out there, and it was important to show the younger ones that it’s not just about what you contribute on court, but what you do away from it too. There are players who didn’t play in the finals, but their contribution in the whole process was important, not just in the final game.

“Also, bringing the fun and enjoyment – when you are connected, it’s special and special things happen. We are very close at the Swifts in club land, and we are also finding that in the Diamonds. So whilst its tough, and there’s heartbreaks with teams and selections, everyone is there for one another.

“That environment can be daunting, you can come in with preconceived ideas, so it’s allowing the younger athletes to be themselves so they can feel pretty comfortable pretty quickly.”