NS EXCLUSIVE: Diamonds take the win while the global netball community chips in

NS EXCLUSIVE: Diamonds take the win while the global netball community chips in

You can still donate to the Bushfire Relief fund here.

The netball community came together for the Netball Bushfire relief game on Sunday resulting in the donation of many thousands of dollars. The money raised will go to the Confident Girls Foundation with all funds going to support netball associations, clubs, teams and individuals who were affected by the bushfires.

The Australian Diamonds were also seeing off coach Lisa Alexander and longtime Diamonds shooter Caitlin Thwaites. They took on an All Stars team comprised of athletes from Australia, New Zealand, England, Jamaica, Trinidad and Tobago and South Africa. The match not only showed the strength of communities in the face of the bushfire devastation, but also the united efforts of the netball community in Australia and around the world, from the grassroots all the way through to the elite. 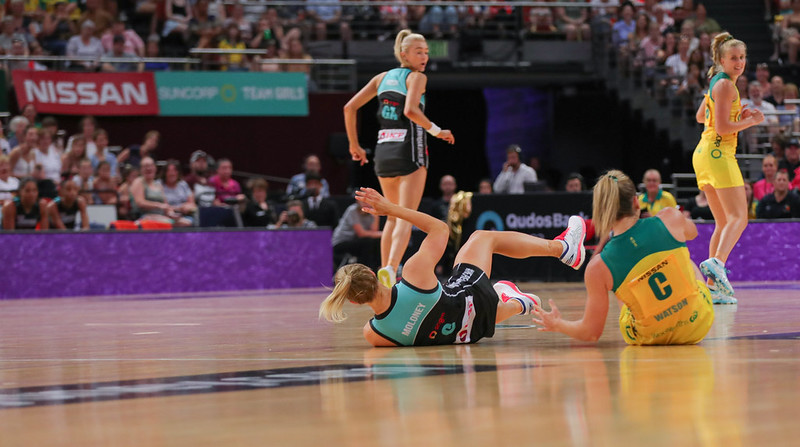 Usual Vixens team-mates Liz Watson (Diamonds) and Kate Moloney (All Stars) on the floor after a tangle of limbs. Image: May Bailey

There were some last-minute changes to both teams, with superstar cross-coder Ash Brazill suffering a season-ending knee injury in an AFLW game in Melbourne on Friday night. Brazill was replaced in the Diamonds side by Gabi Simpson, who was wearing a Diamonds dress for the first time since the beginning of 2019, while Amy Parmenter filled Simpson’s space in the All Stars team.

The game also had two significant rule changes. Rolling subs were introduced and gave a good preview of what we will see when they are used during the Suncorp Super Netball (SSN) this year. This undoubtedly made the commentators’ jobs more difficult, but it was a refreshing change allowing players to come in and out of the game without lengthy timeouts. It will be interesting to see how this affects the momentum swings we often see in the SSN, with players now able to come off without there being an official timeout. It could also have implications for reactive changes based on match-ups. 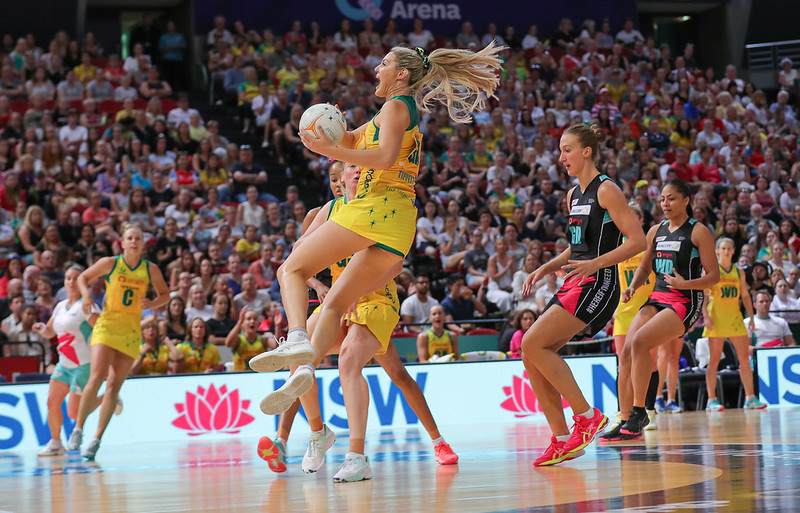 Gretel Tippett was her creative best for the Diamonds. Image: May Bailey

The coaches for both teams relished the opportunity, using the bench often to freshen up the lineup out on court. Could the introduction of rolling subs be an opportunity to see bench players used more often in the SSN? Only time will tell.

A two-point shot zone was also introduced to be played in the final five minutes of each quarter. Each time a shooter nailed a two point shot, Suncorp donated $20 to the bushfire relief fund. This coupled with the rolling subs made for some interesting final spells of each quarter. 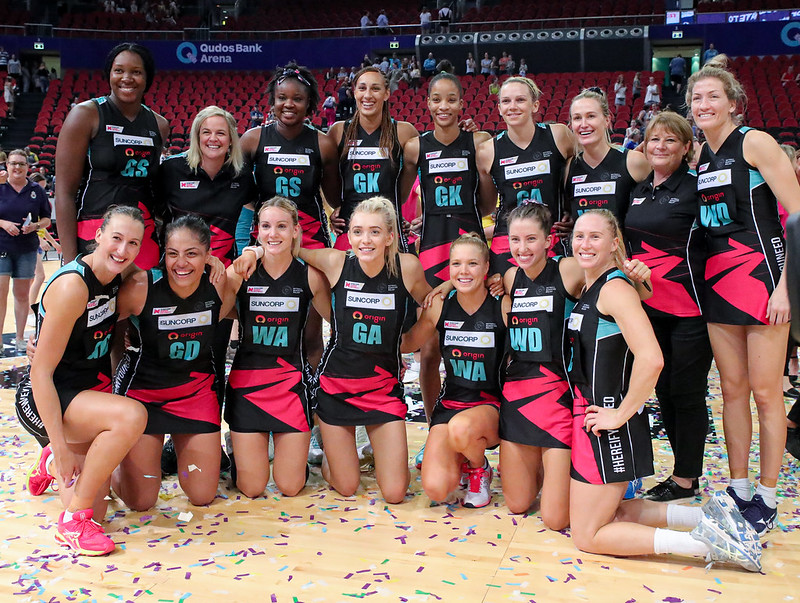 The Suncorp All Stars. Image: May Bailey

It was obvious from the first whistle that the Diamonds would have the upper hand for much of the game. The All Stars lineup would have made for some terrifying reading, boasting the likes of Laura Langman, Jhaniele Fowler, Geva Mentor, Karla Pretorius, Shamera Sterling and prolific English shooting duo Jo Harten and Helen Housby. Yet their lack of playing and training time together was evident from the first misfeed into Fowler and the defensive prowess of the Australian defenders was on show, collecting several misdirected balls.

Many of us thought that the All Stars team would have the advantage on the supershot, considering they had long range specialist Jo Harten who pocketed plenty at the Fast5 All Stars tournament in England. But it was Caitlin Thwaites who starred with the two-point shots across the game. In her last game in the green and gold, she was the most prolific two-point shooter on the court and showed why she has been such a valued member of the Diamonds team for as long as she has. Diamonds coaching staff missed an opportunity to put her on in the final moments of the game for what was her last international appearance. 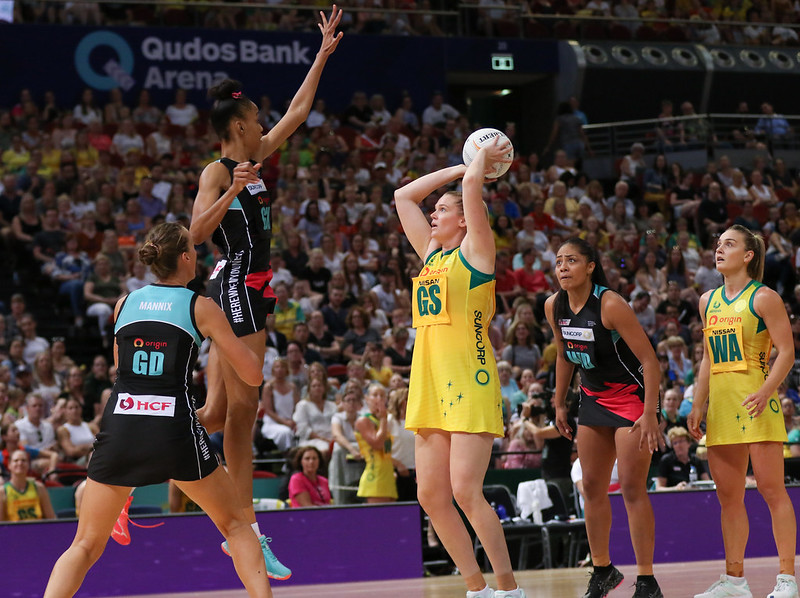 Caitlin Thwaites (Diamonds) takes a long shot over the arms of Shamera Sterling (All Stars). Image: May Bailey

The Diamonds skipped out to a 30-goal lead partway through the third quarter. It wasn’t all easygoing for the Diamonds, who were challenged by some Sterling goal blocks and a couple of brilliant tips and rebounds from Kristiana Manu’a.

Sam Wallace bolstered her team, scoring two two-point shots in a row and heralding a comeback. Her and Harten continued to pile points on and drew within 11 points of the Diamonds. But Tippett wasn’t having a bar of it, nailing two super shots herself and pushing the margin back out.

The influence of the two point shot was clear on the game. It made for a rather unusual situation where shooters wanted their penalties to be pushed out further and being a circle defender involved a lot more work at the top of the goal circle. Manu’a’s speed off the mark saw her pick up significant rebounds in the third quarter to help bridge the gap and the game ramped up in intensity. 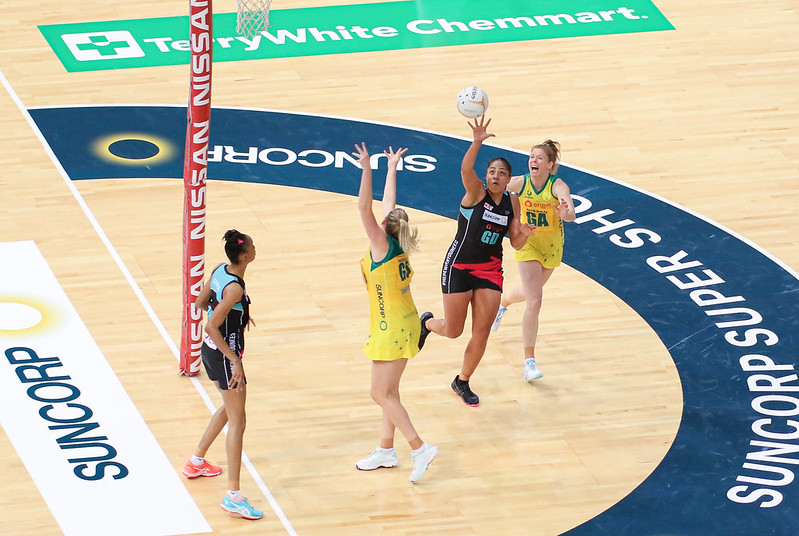 Gabi Simpson brought a sense of calm to the team when she came on in the third quarter, controlling play well from the defensive and middle thirds. Amy Parmenter was also a standout at wing defence for the All Stars with her ability to read the Diamonds’ set plays.

The battle between Langman and Paige Hadley amped up in the final quarter, with both showcasing their speed and strength onto the ball. Simpson was flying at every ball by this point, picking up two key intercepts within 30 seconds during the powerplay period of the last quarter.

The Diamonds finished winners by 13 goals, but the All-Stars won the second half to make it a closer game. This game is the last time we will see Lisa Alexander at the helm of the Diamonds. With no replacement announced yet, this match showed the depth in Australian talent across both teams. With players from all clubs represented, it also gives a good indication of how players are looking coming into the final months before Suncorp Super Netball begins. 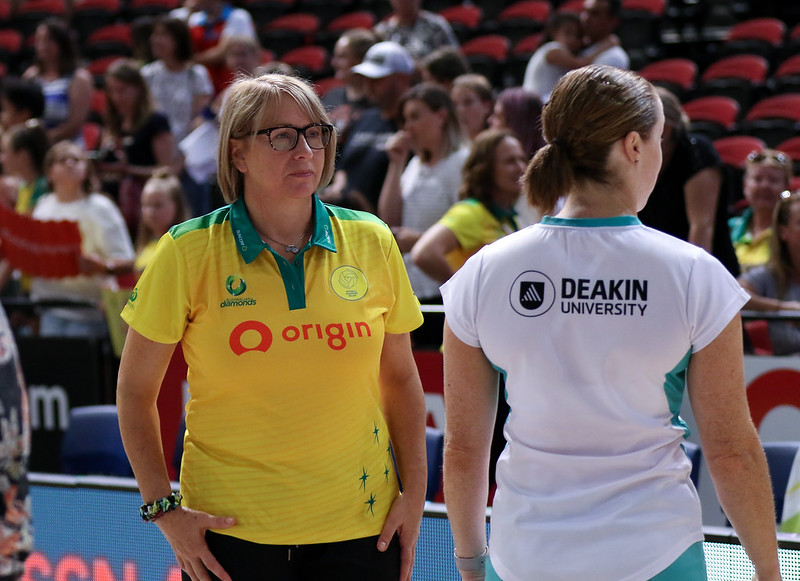 Lisa Alexander in her last game as Diamonds coach. Image: May Bailey

About the Author: Cara Gledhill

I have been hooked on netball from a young age and grew up as a Silver Ferns and Pulse fan in Wellington, New Zealand. I've since moved to Melbourne and am loving the growth of women's sport over here. I'm passionate about making sport a more inclusive environment for everyone and I will also talk your ear off about cats if given the opportunity.