We need the world to know more about netball in the Pacific. We’ve been missing from the top 10 for a while but now we are ready and want to be on that stage. Vivian Koster CEO, Netball Fiji

It’s been a tumultuous three years for Fiji, with the Covid pandemic following hot on the heels of a measles epidemic. Now one of the most highly Covid-vaccinated countries in the world – 95% of the population have received a single dose, and almost 90% have had both – thanks to a ‘no jab, no job’ government policy, the Pacific nation is set to open its doors to the world again on December 1st.

As restrictions are cautiously eased, Netball Fiji (NF) will hit the ground running, thanks to a recently appointed and vibrant administrative team, and the support of its big sisters, Netball Australia and Netball New Zealand.

The NetGO programme, supported by New Zealand, provides teacher, coach and umpire education aimed at increasing netball participation and a healthy lifestyle in school students. Operational since 2017, the grass roots programme has reached over 400 schools, with the long term aim of becoming self-sufficient.

Ms Koster said, “Last year the programme trained 200 teachers, and with average class sizes of 45, they were able to reach a lot of students.

“They not only train students in netball, but discuss healthy choices. There’s an assumption that our rural based people have good access to fruit and vegetables, but through questionnaires we’ve actually found that’s not the case. So we are looking at what the information is telling us, and how we can work with that.”

While Netball Australia is based in a different region to Fiji, they’ve also provided long term support. The Department of Foreign Affairs and Trade (DFAT) has previously helped fund high performance netball teams, but a new initiative has NF excited. Earlier this year, the Australian Government selected them to be part of its Pacific Women in Sport Administration pilot programme, overseen by Netball Australia.

Recently appointed as NF’s inaugural CEO, Vivian Koster, explained, “Pacific Island countries have many talented athletes, but a bottleneck is restricting our netballer’s achievements. So what is preventing us?

“One issue is that in the past we’ve had to rely heavily on volunteers to run our organisation, and as they also have professional work, a lack of time means some things fall through the gaps. This funding has allowed us to look at our governance, structures and women in leadership roles. While it’s slow growth, having paid employees means there is more time and energy to support us in achieving some of our goals.”

Koster, with her wealth of netball knowledge and a proven 20 year track record of administrative and leadership skills, has been joined by Sandeep Prasad, Sport Development Manager and Amit Singh, Finance Administrator. The trio will focus on governance and administration of the sport, leaving the Executive Committee to focus on direction and strategy. 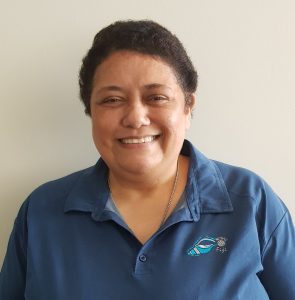 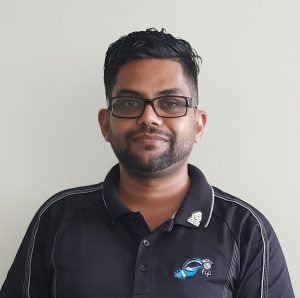 Utilising a top down and bottom up approach, Mr Prasad – who’s been involved with netball since he was young – said, “Our main goal is to make sure everyone who wants to play has an opportunity, so we will be increasing the number of domestic competitions. We’d like to have a more stable age group competition, so setting pathways for all of our players is important.

“Longer term and at a higher level, it’s our world ranking as well.”

Fiji has finished as high as sixth at the 1999 Netball World Cup, and fourth at the most recent Netball World Youth Cup, but currently languishes at 17th in the world rankings. Mr Prasad said, “We want to get back to where we were, and feel we could be. One of the reasons we’ve fallen down the rankings is that other nations have built their structures and caught up, whereas Fiji has stayed where it was.

“A framework for success is needed, and we are hoping this will change with the funding. That also means supporting our umpire and coaching development pathways, and if our districts have coaches they can build stronger teams from a younger age.

“At the moment we rely on developing players once they’re older, and they haven’t necessarily the skills and conditioning in place through that lack of resources.”

There are numerous challenges ahead as Fiji look to revitalise their netball programme, including infrastructure, climate, competition from other sports, distance, transport and funding.

Athletes play outside due to a lack of indoor facilities, facing conditions ranging from scorching heat through to courts reduced to a slippery mud surface during the torrential rain of monsoon season. Playing barefoot is common, even at the National Championships, while in outlying rural areas, ingenuity is used to build goal posts from trees and source alternatives to the traditional balls. 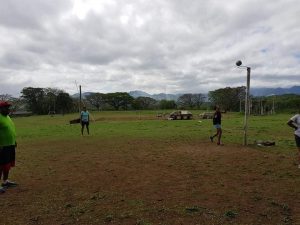 Ms Koster said, “Playing indoors on sprung floors is a big deal for us, and takes some adjusting to. During the monsoon season I’ve been the shoe doctor – using strapping tape to keep the soles of our shoes together, including for the national team members. As you can imagine, it’s not always easy for a player to figure out how to pay over $300 for a good pair of Asics, let alone anything else. But somehow we tackle it.”

With the population spread across more than 360 islands, it’s also difficult for many to access a netball facility. Outlying islands are too isolated for easy travel, those close by rely on good weather and boat services to reach a netball centre, while buses can be few and far between.

Ms Koster has personal experience of why attending training after work can be impossible. “The last bus on the other main island would leave at 3pm as it had such a long distance to travel. At the last stop the driver spent the night, and that was the first stop in the morning. The only way to reach home in that case was to miss training.

“Many players will wake up at 5am and walk a fair part of the way to save money – two hours or more – before catching a bus the rest of the way to the court.

“To me, it says something about the tenacity of these players, and their love for the game that they are willing to do that.”

Koster added, “A lot of villages have their own little netball competition, but the main district associations are in the town centres and we lose players who are too far from the centres. So our district members now have two competitions that run on Saturdays, one on the coast, and one in the highlands.

“The Lau Islands are closer to Tonga than the mainland, but they’ve received kits with balls and cones, are running umpiring and coaching clinics, and have their own competition between villages.”

Mr Prasad added, “We are planning to build stronger, smaller associations around the islands, and help their members to connect with each other. They can then play more often, as it’s more accessible and viable for those players. We’d also hope to have a yearly tournament for the smaller islands and associations so they have something to look forward to.” 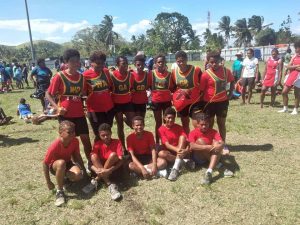 In addition to grassroots programmes, Fiji is also developing its elite talent. The Pearls took part in the 2020 Cadbury series in New Zealand, although sadly a Pacific series, scheduled for October in Queensland, was cancelled due to Covid impacted travel issues. There is some hope that 2022 might see it reinstated.

Through Pacific AusSport, two national athletes, Ema Mualuvu and Matila Vocea, have spent almost six months in a netball immersion programme in Queensland. Experiencing a range of training, coaching and leadership opportunities, the pair competed in the State League and the Sapphire Series.

Ms Koster said, “When they arrive back in December, we are excited for them to share their skills. Not just netball, but those around team environments, work ethic, development, and off court learnings. It was a holistic programme, so they also learned about balancing a life outside netball, and that’s important for our players to hear about too.”

Locally, netball is also being challenged by the success of Rugby Sevens, particularly since the Fijianas won a bronze medal at the most recent Olympics. Ms Koster said, “Historically, netball competitions have run alongside rugby in our villages, so we have some work to do to keep our numbers. You want sporting activities in your community and while we support all our national teams, we view that as an opportunity and a wonderful challenge. We hope to rise to that, and figure out how to keep the excitement for netball.” 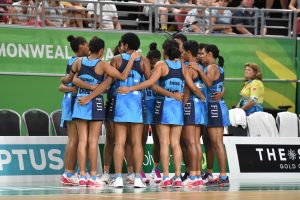 The Fiji Pearls are regular participants at Commonwealth Games (featured here in 2018) and the Netball World Cup, and are hoping that new initiatives will support their elite programme. Image Marcela Massey

Regional development in the Oceania region is critical to the growth of netball in Fiji, but opportunities have been limited in recent years. They haven’t hosted the Pacific Games – a multisport event featuring netball – since 2003, and have lost opportunities that would have come with the 2007 Netball World Cup – shifted to New Zealand following a military coup, and the 2021 Netball World Youth Cup – cancelled due to Covid.

However, Ms Koster believes that there is a strong opportunity for Fiji to develop its sporting tourism.

“We’d like to host more international netball series here. We’ve also had netball festivals in the past run independently by clubs like the Suva Grasshoppers, which attracted teams from Samoa, Tonga, Australia and New Zealand. They are similar to Queensland’s NetFest.”

Mr Prasad added, “It’s fun. What’s better than getting a group of girls together to play netball, then spending a few days lying on the beach afterwards.

With strong safety measures in place and Fiji’s high vaccination rate a bonus, Mr Prasad believes that some people will be more comfortable travelling to Fiji than battling the ever-changing borders in Australia.

“We’d also love to have one of the Australian or New Zealand clubs come here to play in a preseason match. We have direct flights opening up, and the resorts for players to stay in, so the opportunities are endless.” 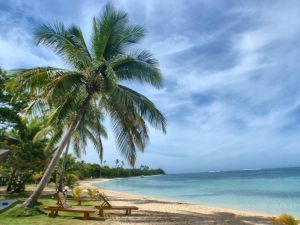 And while most of the region’s limited netball resources are used to develop the women’s game, there’s also a thriving contingent of mens and mixed netballers in the Oceania region. Fiji and Samoa have long punched above their weight – numbers wise – in rugby, and there’s little reason why similar success couldn’t be experienced on an international netball stage.

With a strong push for the sport to be included in the 2032 Brisbane Olympics, it’s just one more reason why Koster and Prasad are excited by the road that lies ahead, and the opportunities that funding will help to support.