It’s the final countdown – the fans of the Lightning and Swifts, and all connoisseurs of netball, are popping the corn, saucing the pies, painting their faces, and charging their glasses for the match of the season this Sunday, the in-form Sunshine Coast at home in Brisbane against the tenacious Sydneysiders.

“With the week off, we focused on ourselves and what we needed to do to get the job done, not having any idea who we were playing. No-one knows exactly how and when Lightning’s going to strike, It’s a nice analogy – but you can make it happen with the atmosphere you create. We’ve come up against Swifts 3 times this year and they’ve all been very different encounters. Focus on the start, doing what we need to, and attack a lead if we manage to get one. We’re hoping to put our supporters’ minds at ease nice and early!”

Each and every coach and athlete has history to write – could Noeline Taurua and her squad win three premierships from three? Could Katrina Rore win the World Cup, ANZ Premiership AND the Suncorp Super Netball Trophy all in one year? Could the debutantes in the Swifts grapple with the star-studded and experienced Lightning?

The hosts have history and form on their side, premiers in 2017 and 2018, keeping the same illustrious coach, and winning all five finals matches they have played in Suncorp Super Netball. The Swifts meanwhile have a novice head coach, have not played any of the finals series in the new domestic league, and the last time a New South Wales team brought back the silverware was in the ANZ Championship in 2008. The Swifts have the thirst for winning, but the Sunshine Coast have the acquired taste. The minor premiers also have shown their ability to charge down and hold a lead, winning the last three match-ups largely through the third or fourth quarters.

The fascinating factor in the finals series is the coach showdown – the brilliance, experience and intuition of Noeline Taurua, against the freshness, personability, and solid tactics of Briony Akle. Taurua leads a team that thrives on challenge and uses flair, but to boot they have dramatically cut their turnover rate in the last two games against the Swifts, with only 17 and 14. Meanwhile, Swifts have not only delivered intercepts to the welcome hands of superstar Karla Pretorius, they have increased their turnovers to routinely 22-25 after the return from the Netball World Cup in late July. The New South Wales team need to desperately get back to basics in retaining possession to be competitive this weekend. Both coaches are prolific users of timeouts, and have trust in their bench players to deliver new options are give their marquee players a rest. 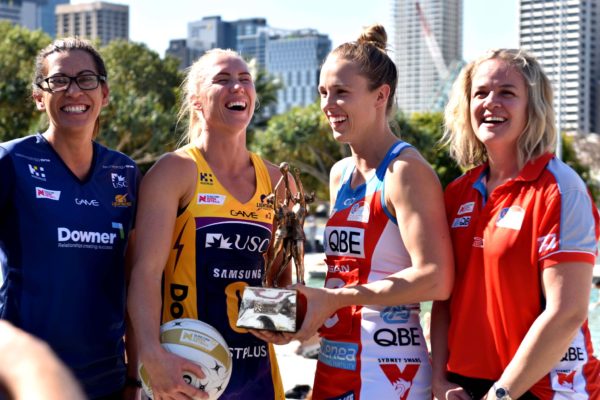 The teams have different basic structures. On attack, the Swifts time their movements well to create space in any of the three forward channels to have long passes and direct play to the forward line, followed by good availability and movement of their shooter at the periphery of the circle which stabilises their scoring pattern. In contrast, Lightning take more time and use more double plays to spin their opponent’s heads, exemplified by Laura Langman and her large number of feeds to circle without a goal attempt. They do not have the same clear channels through from defence, and they do labour with turnovers in transition. Peace Proscovia as a new athlete in this competition has struggled with both her timing out of the circle and her delivery of ball across the circle.

Swifts have suffered in attack after captain Maddy Proud was injured, but ironically the recovery came from new defensive player Katrina Rore, who at wing defence has incredible height and strength, and cleverness in her centre-third backups. In defence, the Swifts rely on astute muscle-ups, a basic but effective play with arms down avoiding obstruction, but using the full force of hips and core to create imbalance and anxiety in the opposing shooters, grabbing the misplaced ball. Klau and Turner have been very clean while destabilising shooters all year. The addition of Rore has improved the havoc they create, as her New Zealand-learned patterns catch Australian foes off guard. The plan for Lightning relies on the very different strengths of Phumza Maweni and Pretorius, the former often not tracking the play outside but keeping an opposing shooter at bay with strength, height and footwork, scoring many rebounds, while the latter has freakish instincts in snaffling ball, particularly on either a retreating shooter near the baseline, or right on the circle edge if even a millimetre of space is allowed.

The midcourt is a wildcard for both teams and reflects the battleground of this grand final for both teams – composure to reset and avoid turnovers, and timing and balance of the front four. Even the greats Laura Langman and Paige Hadley can have possession squeezed out of them if they are pressured into rushed decisions, or don’t decide to pass back early enough in a defensive crunch. Since the World Cup in England, form lies with Langman, with Hadley losing one or two extra turnovers per game. 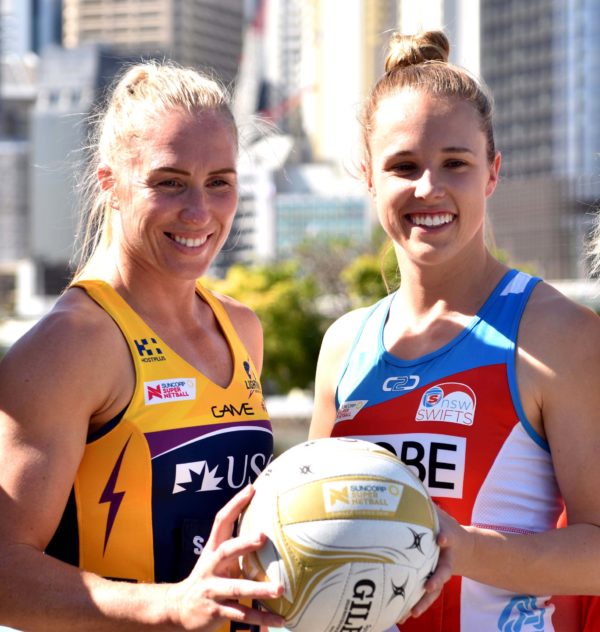 The battle between captains Laura Langman and Paige Hadley will be enthralling. Image Marcela Massey

However the telling story of recent form here is the wing attacks – Scherian has been blistering in finding circle edge and high-quality feeds in the latter part of the season, whereas Natalie Haythornthwaite has found her feet with more regular minutes, and while not flashy, delivers the ball with few errors. Any inspirational play or momentary lapse from these four will be read as a key determinant in the outcome on Sunday.

Moving from the players and structures to form, the Queenslanders should be cautiously confident. The last time Swifts beat Lightning was round seven of 2018 in a home game, and Swifts have never beaten the premiers in Queensland, although they have never faced off in Brisbane. The Swifts have flagged somewhat with injuries to key players, captain Madi Proud, defender Kate Eddy, both out for the season, and also goal attack Helen Housby, nursing a quadriceps strain since the World Cup. They have won only four of seven games since the tournament in Liverpool, while Lightning nailed six from six, coming back with the fearsome confidence of Pretorius and Maweni but ironically not needing Proscovia to dominate as in the first half of the season.

It will be an interesting decision as to starting positions, for different reasons on each team. For Lightning in 2019 Proscovia was recruited to be a target shooter and was selected every week initially, but foundation player Cara Koenen has supplanted her for more than a month, using movement and balance rather than a singular plan of holding. It might be that Koenen resembles her predecessor Caitlin Bassett, and goal attack Steph Wood is reading her play better. In the midcourt it does seem clear that the tall experienced McAuliffe will have the start, but that Jacqui Russell could be used at any time, and certainly as a replacement in case of injury in any position. Lightning circle defence is destined to be Pretorius with Maweni, and the use of Annika Lee-Jones will be only with necessity.

Swifts have a slightly weaker bench due to their injuries this year, but coach Akle has given fair exposure to the youngsters in the group. The big question is whether to start Sophie Garbin at goal shooter, as she has performed well off the bench against Lightning in their meetings this year. Bet on Wallace starting, with Garbin being included in either position for injury or to give a tactical rest for the recovering Housby. The midcourt should stay solid with Haythornthwaite, Hadley, and Rore, unless Rore is needed back in the circle to nullify Wood, where the question will be which of Turner or Halpin are swung onto the wing.

On the last day of the season the fans will get their reward – incredible dedication and fire, and their hope of an unpredictable and hard-won outcome.