NS EXCLUSIVE: Kate Eddy – When the game gets tough

NS EXCLUSIVE: Kate Eddy – When the game gets tough

As the saying goes ‘There’s more to life than winning’, but for elite athletes who dedicate their lives to their sport it can be a hard concept to swallow.

No one dreams about losing the grand final, or being ruled out of a winning team with a season ending injury. But when life is about winning, how do you cope with losing?

Kate Eddy, current Melbourne Vixen player and previous NSW Swifts defender has experienced both the highs and lows of the game in her short career. At only 24 she has been a part of two Suncorp Super Netball grand final winning sides, experienced a season ending injury and navigated the challenges of a team rebuilding.

Eddy began playing netball at 6 years old. Born in Victoria, she developed her skills to become one of the best shut down defenders in the league.

‘I moved through the Netball VIC pathway and made my first Victorian team at 16, playing under 17s, and followed that through to under 21s. I was a part of the VIC flames as my first Australian Netball League team, and a part of the Fury.’

‘I was then fortunate enough to get picked for the World Youth Cup team, and in that same year I received a call to play with the NSW Swifts.’

Eddy cemented her position in the Swifts starting seven as wing defence and played a key role in the club’s 2019 Championship-winning campaign before injury ruled her out of the Finals Series. 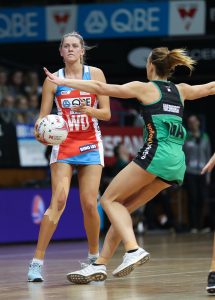 Kate played for the Swifts in 2019 before injury cut her season short. Image: May Bailey

Eddy took the opportunity to return to her home state in 2020.

‘I was with the Swifts for two years, and that put me in good stead to return home and play for the Vixens, which I am now in my second year and loving it!’

In her first year as a contracted player at the Vixens, Eddy experienced her first grand final as a court player.

‘The high point so far has definitely been the 2020 Grand Final with the Vixens. For me, missing out the previous year with the Swifts due to my injury meant I couldn’t take the court for the final, so the 2020 season the Vixens and playing in the grand final is something I will treasure forever’.

Eddy was unable to take the court in the 2019 Grand Final with the Swifts. Ruled out with an ankle injury with a projected 16 week recovery, she was forced to watch the championship win from the sidelines.

‘One of the lowest points of my career was missing out on the grand final with injury. That was pretty tough. You do all the hard work, you play to win a grand final, and to not be able to be a part of that, and knowing I was leaving NSW at the end of the season, and not being able to close the chapter how I wanted.’

Watching the team take the win was a hard way to end her time in New South Wales.

‘I wasn’t able to finish with the team on court, it was bitter sweet. I would’ve loved to play, but I was still stoked to be a part of the team.’

History was almost repeated for Eddy in 2020. Hurting her foot in the last round, it was looking like she would sit out the final series once again.

‘Last year was very similar, in that initially I was told I wouldn’t be able to play in the final. I had a scan on my foot after the last round and physio told me I shouldn’t be playing and was looking like a six to eight week injury.’

‘When is your body telling you you can’t play it’s really hard and to go through all that emotion again, being told again I wouldn’t make the final, was pretty difficult’.

‘Luckily it was more positive than expected, and I was able to play most of the grand final.’

Eddy was able to take the court for the majority of minutes to see the Vixens triumph over West Coast Fever by 2 points.

‘I did end up breaking my foot in the final, so the whole off season was taken up with surgery and rehabilitation.’ 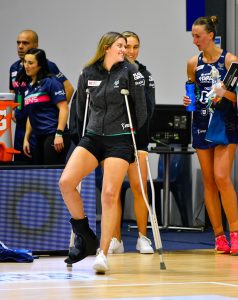 Kate sat out her team’s 2020 semi-final after an ankle injury. She went on to break her foot during the grand final.  Image: Simon Leonard

Eddy and the Vixens had great success in 2020 but 2021 has hit the team hard. Struggling to find the wins on court, paired with the challenges of COVID, it has been a tough year.

‘Personally, the injuries are the hardest part of the game, but this year has been pretty difficult. Being away from family and friends, not knowing what’s next, whether it is where we are playing or who we are playing, packing with no details has created a lot of ups and downs.’

With only two wins the Vixens finished on the bottom of the ladder, and to add insult to injury, experienced a short season, unable to feature in the finals.

‘As a team it has been one of the hardest years, between the unknowns and not being able to put out what we want on court, and not being rewarded with winning has been difficult for everyone.’

When a historically successful team has a dip, it can be hard to not to focus on the negatives, but the Vixens are looking to use this season to keep connected .

‘Watching a movie together, getting dinner, going for a walk or coffee with each other and together helps process the game and the emotions.’

‘This year has been very different and we have had to change the way we approach things because of the uncertainty and travel. I would normally be able to see friends or family outside of netball but as we have been on the road so much, the girls in the team have become family, helping each other to decompress from the game.’

‘This season has been hard on those who rely on external support outside of the team, meaning we have has to develop new ways of processing games, and looking at small goals.’ 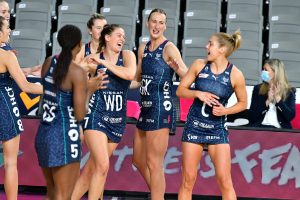 Despite having a challenging season, the Vixens have built sttrong relationships off and on court. Image: Simon Leonard

When the losses are stacking up, Eddy and the team work hard to process the loss and shift their mindset into the next game.

‘I try to reflect on the game in the moment, as I am a over thinker and if I dwell on things too long it’s not the best for me or my team mates. If I overthink the game it depletes my energy levels and I can’t give as much back to the team.’

‘Dealing with it after the game is important, and being able to communicate how we feel in a post game chat is key but then stepping away and being Kate Eddy as a person helps move on from the game and flip your energy’.

‘The steps after a game are the same regardless of the result.  We always debrief the game, what we did well, what we can improve on, how we felt and what we set out to achieve on court and if we did it.’

‘The process is the same but emotions are different depending if we win or lose.’

‘There is generally a week between games, but if you can’t move forward onto the next one and you keep dwelling on the past, whether you win or lose, is not helpful in progressing as you need to start planning for the week ahead.’

‘We aim for particular goals in a game and when you are not achieving these its hard,’

Much like the 2020 season, 2021 has seen teams spend a huge amount of time together. Sports can be highly emotional for athletes and the hubs developed to keep the group safe can add to the pressure of an already draining season.

‘The recent seasons have been harder as you are surrounded by netball in the hub and on the road it can be difficult not to obsess over it, and you can’t go for a coffee as easily with someone and not talk about netball.’

‘This year the team has lent on each other and become a lot closer, off the court have been doing team dinners, and checking in on each other’.

With mental health being at the forefront of athlete wellbeing, players, coaches and support staff are all supporting one another, especially when the games get tough.

‘Our leadership group are genuine people you can talk to about anything, and they make a real effort to check in on everyone and making sure our well being is at the forefront as well, as you play well, when you feel good’. Says Eddy.

‘Our coach and support staff go beyond the court and always check that we have everything we need both on and off the court, even when things are not going as expected.’

‘Our wellbeing manager, support staff, coaches, leadership team doctors and others are only a phone call away, and they are willing to help, from everything to university assignment extensions, to career conversations they are there to support us.’

‘Simone is extremely approachable and prides herself on having that open relationship where anyone can have a chat with her.’

‘Someone is always available through a multitude of avenues.’ 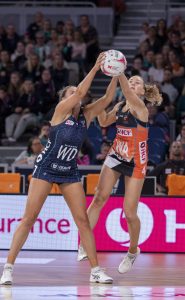 Kate Eddy taking an intercept on the edge of the circle. Image: Kirsten Daley

Eddy says that injury is more difficult than an unsuccessful season, with the mental side taking its toll more than the physical.

‘I was itching to get back, and if anything my physical limits affected me mentally. Rather than being hesitant that my foot couldn’t handle netball, I was wanting to progress faster, and rehab it is not a straightforward process and this can be hard to comprehend at times, as you can go backwards to go forwards.’

‘When I was in the rehab group you can see the main group on court, and you just want to be with them and training hard, and that can be mentally tough.’

‘The mental side of recovery is much harder than the physical side’.

A chronic injury can play on a players mind, long after the rehabilitation programs have finished.

‘Once you have an injury you can be hyper aware of it, and can be mentally draining worrying that it could happen again but being able to check in with the physio and having that open communication is reassuring as they know what’s best and we trust them completely.’

Eddy says while it has been a disappointing season, it doesn’t diminish her passion for the game.

‘We all play professional netball because we want to succeed and do the best we can. Netball is our job, and we work our butts off to succeed and win a championship, and it was our dream as a little kid.’

‘The longer the journey, the better the success and the greater it feels as you have had to take the hard road.’