Kayla Johnson has just finished the toughest training of her season to date. There was a Bronco test, a gym session and a court session all in the one morning. She’s “pretty buggered”, she tells me, from her car outside. And it’s certainly not the first time in recent years that she’s felt this way.

The last couple of years for the talented player have been full of twists and turns, with Johnson returning this year to the Silver Ferns and her ANZ Premiership side, the Robinhood Stars, after two years away in Australia. She’s been on a journey which has required persistent hard work and which has challenged her in a whole range of ways. But the aspect of her journey to which our conversation naturally gravitates is being the mother of two year old Millah.

It’s a pleasure to talk to Johnson about motherhood not only because she speaks with such clear love for her daughter, but also because of the honest and authentic way she shares her experiences.

She tells me, for example, about her travels to London with the Silver Ferns for the Quad Series in January this year. Johnson travelled with Millah and an “amazing” friend and the three stayed together as part of the Ferns’ strict bubble while there.  It was “an absolute nightmare”, Johnson says, an experience she would “never recommend to anyone.” “(Millah) literally screamed from New Zealand to Singapore, eleven hours straight, so it was a great start!” 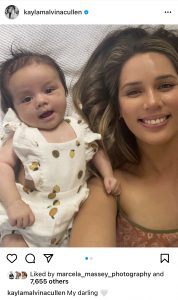 Kayla Johnson and her beautiful daughter Millah. Used with permission of K. Johnson.

Johnson suspects Millah was going through “some kind of regression” at the time and was very clingy to her. This made the tour “probably the most challenging thing I’ve ever done, trying to juggle being a Mum but also … because I hadn’t been on tour for so long I was still just kind of getting back into the groove of things, seeing how things worked again in that environment.”

The rangy defender was surprised to get the amount of game time she did in London and suspects she did it “on pure adrenaline. The sleep deprivation carried me through, I must have produced extra adrenaline and I just used it on the court.”

Despite all this, she and Millah got through the tour and the lengthy stay in MIQ which followed, and she’s careful to point out that Millah did “well considering so much travel, being around so many new people.”

It’s a far cry from how she was expecting her life to look back in 2019 when she moved to Sydney to support her husband Shaun in his rugby  league career. Johnson was six weeks into preseason training with her new side, the New South Wales Swifts, when she found out she was pregnant. She had been thoroughly enjoying training and relishing the challenge of “playing their style, which was really tough.”

In early pregnancy she loved “being able to eat whatever I wanted, not training as much … it was amazing!” It also shifted her focus to her passions outside of netball, completing a floristry course and temporarily working from home as a florist.  “I was rather bored being at home a lot and not a lot of friends and family over there so I thought what’s something that could keep me busy, something that I really like, and I’ve always wanted to be a florist so I pretty much just threw myself into a little side hustle.”

“… It didn’t last very long. I did it for four weeks and then I was induced to give birth. I thought oh, I’ll have Millah and I’ll keep doing this on the side. That went out the window as soon as I found out how little babies sleep and the lack of energy that I had! I thought I could take her to the markets at 4am. Even though I was as already up with Millah at that time, I thought, yeah I can’t do this anymore!” The love for floristry remains however, and in the long term Johnson would like to do “something in creative industry … I would like to do an interior design course one day when I get some time.” 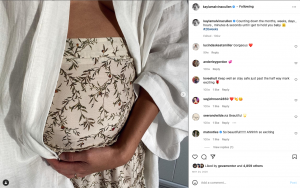 Towards the end of the pregnancy Johnson “missed netball so much, I wanted to play again but thought “who knows, will my body recover? … You always see other Mums … come back so quickly. I wasn’t sure if I was going to be like that or the other end of the spectrum.”

Johnson is friends with Australian netballer Kim Ravaillion and during pregnancy found herself “religiously looking at her page and how fast she bounced back from her birth and her pregnancy. She looked amazing and I thought if she can do it I can do it too. The reality of it was a little bit different.”

After birth, Johnson has spoken candidly about how her body was “pretty broken”, rendering her unable to walk for about a month afterwards. “The first probably three months were really hard on both me and Shaun actually, just because we didn’t have any family so it was really hard and Shaun snapped his Achilles tendon three weeks after Millah was born … Shaun couldn’t really walk either so I felt like I had two babies to look after.”

After the birth, an early focus for Johnson physically was working on her pelvic floor. “I went and saw the women’s health physio … she did all the internal examinations and pretty much told me my pelvic floor didn’t exist anymore! I had to work really hard to get that back. I did lots of Pilates and just all the little exercises.”

She’s reached a point now where “it works enough to not pee myself when I jump” but continues to do Pilates at least once a week and says that it is something she will need to continue to focus on as the season progresses. 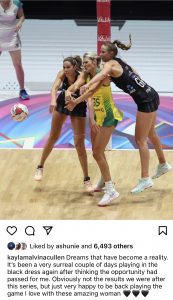 Kayla Johnson returned to some strong form during the January Quad series. Image used with the permission of K. Johnson.

Then came the slow and steady build up to taking the court again. That required Johnson to, quite simply, “work my ass off.”

Even now, having made her return to the Silver Ferns and the Stars, she admits, “I still feel like my body’s still not quite there. It’s something that I can manage, it’s just not as effective as I used to be. I used to be so much faster and I could jump higher and run for longer. I can do those things, I just have to try harder. It’s frustrating at times but look I’m still out there, I’m still working on it every day and I’m hoping one of these days everything is going to fall into place and I will just feel like my old self again.”

Not only is there a relentless training schedule (six days a week) to manage now, but Johnson recently has the added challenge of not having her husband by her side as he is based in Australia with the Warriors. Initially, this was hard and “a bit all over the show” but Johnson and Millah are finding their feet. “… Now that we’re settling into the season we definitely have better routines in place, Millah knows what she’s doing each day, I know what I’m doing each day. We’re doing a lot better now.” 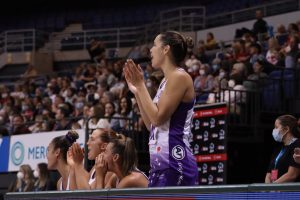 Kayla Johnson has returned to the court with the Robinhood Stars in 2022. Image: Graeme Laughton-Mutu

It definitely does not leave much time for Johnson to herself and understandably there was an adjustment phase to this aspect of her life too. Before Millah she “… loved to go for facials and massages and have lots of me time.” Now she says she has “kind of switched my mindset into turning really little things into nice bigger things like saying I’ll have a cup of coffee or go sit outside in the sun and read a book or listen to some music or something … I’m happy with that now, I don’t need to go out and have a day spa. I’m pretty content with having these little moments where I get to relax a little bit.”

At the moment, what makes her proud to be Millah’s mother is watching her little girl develop and acquire new skills. “Seeing her learn how to climb the monkey bars at the playground and she couldn’t do that last week or she’s learned a new word or someone’s name or a new person.”

For herself, Johnson is “so proud of my body and my resilience for just pushing through even though it feels like my body doesn’t want to do it.”  And – after the journey she has been on – it would be hard not to agree that she should be immensely proud of that.