Athletes don’t just work hard on game day, they train, diet, prepare, travel and work through rehab and recovery. In between trying to be the best athlete they can, they still have to take care of their own needs and for many players that includes a career outside netball.

Either as a supplementary income or planning for their life after netball, many professional netballers take on work or study outside of the game, and in some cases sacrifice a traditional career to follow their netball dreams.

One of West Coast Fever’s breakout stars, Emma Cosh, has taken a step back from her teaching career to follow her professional netball dream. Traditionally a goal attack, Cosh made her debut for Fever in Round 1 of the 2020 Suncorp Super Netball League, later transitioning to wing attack in Round 9 to cover space left by an injured teammate.

Seizing the opportunity, Cosh impressed and was offered a squad contract with the Fever for the 2021 Suncorp Super Netball season. 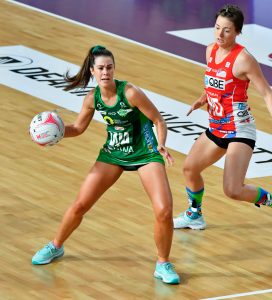 Emma Cosh travelled to the 2020 hub as a training partner for the shooting circle, but found herself as the Fever’s wing attack following a season ending injury to teammate Ingrid Colyer. Image by Simon Leonard

Making her debut at 27 years of age Cosh had an established professional career, unlike younger recruits, many of whom have not started full time work yet.

‘I have always wanted to be a teacher’ said Cosh, ‘I enjoyed coaching netball when I was younger and this influenced my path into teaching’.

Now contracted as part of the Fever team, Cosh said her teaching role as Netball Programme Coordinator at Governor Stirling Senior High School in Perth’s east, had to take a back seat to netball.

‘I now teach 2 afternoons a week, 0.2 FTE, which is a change after five years of full time teaching and full time studying before that.’

Cosh had been a training partner for 3 years when Covid struck and moved the 2020 season into an isolation hub.

‘It was a tough decision to make the move to the hub. I was full time teaching, and financially it was uncomfortable to make that decision straight away.’

As a training partner there is no guarantee of game time and payments are significantly less than contracted players.

‘But I had been working towards making the team for 3 years, and with an extended squad in the hub environment there was a lot of opportunity, I thought I should take the time to give it a shot.’ 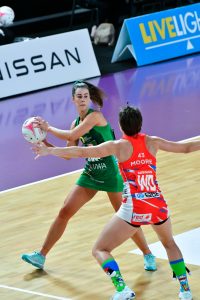 While Emma Cosh is still learning the craft of wing attack, she’s made an impressive start in the Suncorp Super Netball league. Image by Simon Leonard

Cosh only committed to a 5 week contract, and unsure what the season would hold, took leave without pay from her full time teaching role to make the move to support the team in Queensland.

‘I initially took 5 weeks off work to see how it would go, as I thought I would find it hard, but the initial weeks went really well and I decided to stay on.’

This proved a good decision for the training partner, fitting seamlessly into the wing attack position for the team from round 9, cementing her position in the starting seven  and winning player of the match in the preliminary final with 43 circle feeds and 27 goal assists.

Cosh was then offered a permanent contract for the 2021 season.

‘When I was offered the Fever contact I was not going to say no, as it was always something I wanted to do, and a goal of mine to make the team.

‘It was just how I would balance the financial aspects and holding my role as a teacher.’ 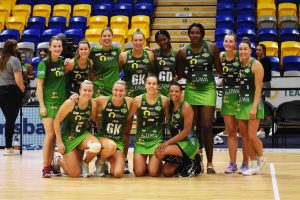 Pictured here as a training partner in 2020, Emma Cosh was offered a full time contract with Fever for the 2021 season. Image by Marcela Massey

After juggling full time teaching and netball for several years, Cosh decided to focus on netball in 2021, and as a result had lowered her teaching load and taken a significant pay cut.

‘In season netball takes up both more time and energy than an average 9 to 5 job, training is tiring, and you need to be switched on when going to work after a session.’

The school offered a Cosh permanent teaching role at the same time as she received her Fever contract, allowing her to reduce her teaching hours to fit her new netball schedule.

‘Financially I knew that I would need to keep some sort of balance with teaching, so that I am still supported, and it is important to ensure I have something else other than netball for the future.’

Cosh, and other netballers such Layla Guscoth, previosusly of the Adelaide Thunderbirds, have put their careers on pause to dedicate time to netball. Guscoth, an English international defender, took a year out from her medical career to play in Australia. 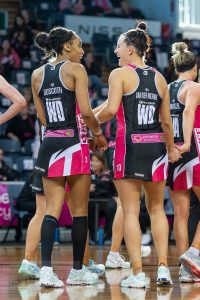 Layla Gusgoth (left) was unable to work as a doctor while she was in Adelaide, and has at times put her English Roses career on hold during her medical training. Image Sue McKay

“Being a full-time athlete has huge perks but as imports we are so restricted with our visas as to what we can do outside of the sport, even in a voluntary role,” Guscoth told the Thunderbirds’ website.

“Although we tried to explore options to allow me to do more medical work around training, it was becoming more difficult especially with COVID-19.”

“Given the ongoing pandemic, working in some capacity is something that I am keen to be able to do.”

Guscoth chose to return to England to be closer to her family and further her career as a doctor in 2021.

Other athletes have looked to careers that are flexible to suit the demands of professional netball.

Maddy Proud of the New South Wales Swifts is a published children book author, and Kim Ravallion of the Queensland Firebirds runs an online fitness company. These roles provide a second income to support the players and set up futures beyond the court.

In 2021, the minimum salary of all contracted athletes in Suncorp Super Netball rose by 10% up to $33,000 which, in addition to the increased health insurance allowance of $2,667 and a technology allowance of $1,000, resulted in overall minimum payment to players of $36,667.

Players agree to 12-month part-time contracts, averaging 20 hours per week. The contracts allow a six-hour block of time between 8am-6pm weekdays within which players and training partners are not required to attend training sessions. 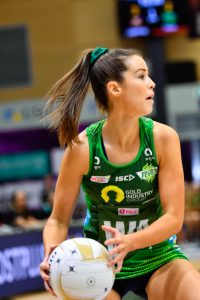 Emma Cosh – looking into the future. Image by Simon Leonard

‘It is important that players do have other options outside of netball, but is it a juggle at the same time.’ said Cosh.

While Cosh and many other players have given up financial success for athletic excellence, time in the game provides valuable experience both on and off the court that is priceless.

‘It is great to be able give a lot more time into this season, and having that time to build and learn from a new player perspective not only helps my game but gives me an understanding of the game that I can use in my teaching career to benefit my students.’