New Pulse signing Chelsea Pitman is crackling with excitement despite having just hopped off an arduous flight. It’s been long – Pitman travelled from Singapore where her husband currently lives, and sleepless – thanks to a barking, pooing Chihuahua sitting just two rows in front of her. But none of that matters because Pitman is about to embark on the next stage of her netball career.

There’s also a strong sense of anticipation from Sam Bird, London Pulse’s Director of Netball and Head Coach, after the franchise recently announced next season’s line-up. Bird has retained the core of her talented young playing group, added a couple of legends, and kept the committed team behind the team in place.

Having finished third in the Vitality Super Netball League this year, Pulse is keen to push for the 2023 title. Bird said, “We fell at the last hurdle in the season just gone, and I think they are ready to go one step further. It’s really nice to know that we have a brilliant core of athletes that want to push on and try and win the thing.”

With lots of off-season movement across the league, Pulse are fortunate to have one of the more stable rosters in the VNSL. The four young players they’ve lost – Tayla Honey, Jas Odeogberin, Kira Rothwell and Jayda Pechova – have all moved on for university needs.

The ability to keep developing rising stars, and build on already established connections, can only be a bonus. Bird said, “I think because we put our faith in the young athletes a few years ago, they’ve bought into the vision that we could provide a world class training environment and competition.

“They’ve worked really hard, and they’re competitive with each other while also being supportive and tight-knit at the same time.”

And while the young roster continues to build, the addition of big name stars Jade Clarke and Chelsea Pitman should boost Pulse’s premiership hopes. Bird explained, “I’ve known them for a long time, and I think the club performing so well this season gave them confidence they could come into our environment and whilst share their experiences, could also push on themselves.

“Both athletes are very humble and want to keep improving. I think being surrounded by the next generation of Roses in a club environment is perfect for them at this stage of their careers.

“That shows how far Pulse has come in a short space of time, that we can attract world class athletes. We had to be ready to deliver to those athletes a place where they can thrive.” 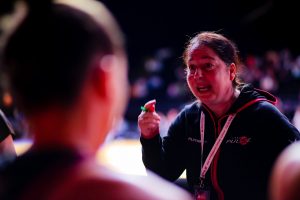 Sam Bird has been the driving force behind London Pulse’s growth over the past two seasons. Image: Ben Lumley

Both midcourters and Commonwealth Games gold medallists, Clarke has transferred from Leeds Rhinos, while Pitman returns to full time netball after a challenging 18 months. The former Adelaide Thunderbirds captain was dumped at the end of the 2021 Suncorp Super Netball season as the club chose to pursue a youth policy.

Losing her job so late in the contracting period, Pitman was unable to find a playing role elsewhere for the following season, and settled for a training partnership at West Coast Fever. While she only took to the court for a handful of Covid-created opportunities, Pitman provided invaluable encouragement and assistance to Fever and also Giants who she made a cameo for in one match.

Bird said, “You can’t put a price on her experience, and the way she shares it. Those peer to peer conversations are something we want to develop. For athletes taking the next step, it has to involve less direction from coaching staff and more peer trust and connection, so that it can happen in action on court, rather than them look for direction when they have a break every 15 minutes during the game.

“Chelsea and Jade will bring that in spades which will make a big difference to the success of our on court performance.”

While her inability to play full time this season meant Pitman wasn’t really a 2022 Commonwealth Games consideration, Bird believes it will do her ‘no harm’ to be back under the noses of the England coaches and gaining regular court time alongside other Roses’ athletes.

“If she is brought back into the Roses’ environment, it will be with a familiar roster so it will be helpful for her to slide between the two.

“From my perspective, Chelsea is a world class player, she’s a strong wing attack, and she is also coming into our roster as a goal attack. So she’ll be a playing across both positions, and that’s a great asset to have available.”

After the heartbreak of being let go by the Thunderbirds, Pitman said she is ‘super pumped’ to have a full time contract again. “This year I took up a training partnership with West Coast Fever. That was such an amazing opportunity, and it opened up doors for me to be seen to be playing again at that level.

“It also made me believe that I wanted to be playing full time again, so when the opportunity to travel to England and support the Roses in preparing for the Commonwealth Games came about, I also started having conversations with Sam (Bird) at Pulse. To see whether we were the right fit for each other, and if we could get a contract over the line.

“From what I’ve seen from the outside, Pulse’s culture, the team, the girls – I felt like that was a good fit for me. I’m at the stage of my career where I still want to have success, I still want to strive for premierships, but I also want to help the younger generation by sharing some of my knowledge.”

With her husband based in Singapore, it will be a big move for Pitman, but she has his full support. She said, “He saw the devastation for me in not being able to finish at the Thunderbirds in the way I would like. That sometimes happens to athletes, but I never lost the passion for it, my body still allows me to play great netball, and when I had opportunities this year I think I did my job well.

“So he understood that if I didn’t take this opportunity, I could have been bitter and resented it. The move isn’t forever, and when you are married to someone for a long time, what’s one year?

“I’m definitely grateful for things coming my way and opportunities like this. The situation in Australia made me realise how much I love the game, the intricacies, the hard work, the tough stuff including all the emotions. So the move to Pulse is like Christmas for me.” 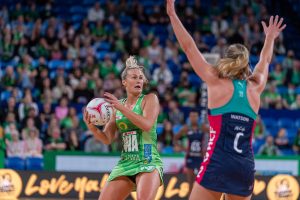 As a West Coast Fever training partner, Chelsea Pitman made the most of her limited opportunities in the Suncorp Super Netball competition in 2023. Image Clinton Bradbury/Bradbury Photography

Pitman has been signed as a wing attack and goal attack, which should only add to her prospects of national selection. She said, “I haven’t shot in a long time,” she said, “but I feel extremely confident in the goal attack movement. So I’m working hard on putting my shots up, and the decisions and creativity are different to what you use at wing attack.”

Pitman has never made a secret of her desire to play in the red dress again, and just prior to the recent Roses’ selection said, “I haven’t been shy about that. If it comes to fruition down the track, amazing, but at the moment I’ve got an opportunity, a full time contract, and life is good.

“What I can control is being fit, playing good netball, and making sure I enjoy it because that’s when I play at my best. And if I don’t make the team, that’s just the way cookie crumbles in sport.”

The moving roster of players will present some challenges for Bird as a coach – athletes are contracted from the 1st of October but will move in and out of training as tours dictate in one of England’s busiest international seasons since Covid hit.

As 2023 starts to unfold, Bird said the biggest challenge will be balancing the use of her squad after a long international series and across a busy season. “We were a bit fatigued this year when we got to finals. We were 8th the season before, jumped up to third this year, and while that was our priority at the time, it took a lot of energy.

“Now I believe we will be able to balance and rest players across the season, plus our players now have more experience under their belt – only one to two had experienced play offs before.

“I’m delighted that we will be playing home and away games again, and we want to draw more to watch home games at the Copperbox, so our fans feel connected with us.”

Having a world class Performance Director in former Diamonds’ coach Lisa Alexander, will also be an important piece of the puzzle, according to Bird. “Often as coaches you don’t have the luxury of a critical friend in terms of developing coaching skills. Those things you can shelve when you’re tired, you’ve had a long day, and you’re busy.

“So we’ve made ourselves adopt a lot of reflective practices and debriefs about the sessions we are setting, what we are trying to achieve, what we’ve done or not done.

“Fi (Murtagh) and I were pleased with how we developed our game day prep and approach, and how professional and ruthless our team was in a lot of their performances.

“And for 2023 we have a really good mix of players that are super competitive but also sponge-like, so they have so much growth to go, as well as being very good already.” 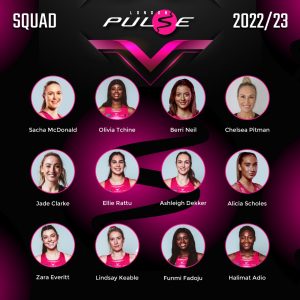