NS EXCLUSIVE: Madi Browne – “I’ve Given it Everything”

NS EXCLUSIVE: Madi Browne – “I’ve Given it Everything”

If Madi Browne’s knees started her netball career, it’s only fitting they called time on it too, refusing to carry her to the season’s final whistle. While her retirement may not have been a title-winning Cinderella moment, but an injury forced decision, Browne left loving the game as much as she did from her very first day. That, and fulfilling a long-cherished dream of playing alongside her sister, proved to be as magical for her as any glass slipper.

One of the finest midcourters to grace the game, Browne’s elite career spanned 15 years of the camaraderie, graft, accolades and difficult times that comprise elite sport. It’s an almost unimaginable endgame, given her diagnosis with juvenile chronic arthritis as an 18 month old baby. Browne’s parents were told that she would be facing a lifetime of pain and disability, but it wasn’t a future they imagined for their daughter.

Rather than place limitations on Browne from the start, they decided to keep her as active as possible, starting her with swimming, and moving on through a range of sports including dancing, basketball and netball. That variety gave her the skills to succeed in netball: from dancing came her incredible footwork and agility, swimming her endurance, while basketball added to her dual-sided ball-handling ability. 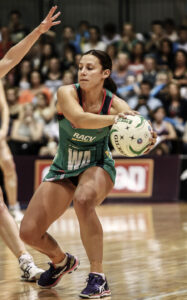 Left or right handed – Madi Browne could do both. Vixens 2014. Image Simon Leonard

Rocketing up through the netball ranks, Browne signed with the Kestrels in 2006, then hopped to the Melbourne Vixens in 2008. Confined to the bench for most of the season, the teenager decided to confront coach Julie Hornweg about her lack of court time, and instead was given a life changing spray.

In Shine: The Making of the Australian Netball Diamonds, Browne related, “She just laid it all out. ‘You need to get fitter, you need to lose weight, you need to be more consistent.’”

Though filthy at the time, Browne found that her coach’s tough words were a turning point in her career. “At 18 or 19, you’re like, ‘Excuse me, I know everything, don’t I?’ Isn’t that what every 18 year old thinks at the moment?

“Then you listen to the actual message, not maybe the tone or the delivery or the person that’s giving it and thank ‘Hang on, I think she’s right.’

“You have to be prepared to look for the ugly and the uncomfortable stuff. And think, ‘I didn’t perform, or I’m not where I thought I was, or that’s not where I want to be.’ So it was such a good learning life lesson early on.

“You take those messages, you take that feedback and you look deep within yourself. If it wasn’t for her having that honest hard conversation with me, maybe I wouldn’t have taken it seriously or I wouldn’t have been able to do what I did.” 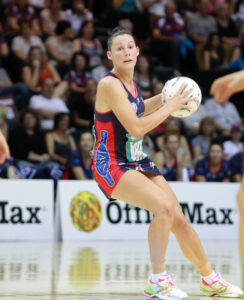 Taking the advice to heart, Browne appeared at West Coast Fever  for the 2009 season, fitter and stronger than she’d ever been. Her newly developed physical prowess combined with Cirque de Soleil quality focus and ball skills, had transformed her game from good to elite.

Despite her form, Browne, part of the wider Australian squad since 2007, missed out on the 2010 Commonwealth Games and the following year’s Netball World Cup. Told by selectors that she was too young and inexperienced against main rivals New Zealand, Browne pondered the conundrum of how she could gain experience if she wasn’t part of the team.

Working through those gut-wrenching disappointments, 2012 was the year that Browne made it impossible to be overlooked. She went on to win the three top awards in Australian netball; the ANZ Championship Player of the year, International Player of the Year and the Liz Ellis Diamond, a feat that has never been repeated.

With her career following an upward trajectory, 2014 would prove to be one of Browne’s best. She won a premiership with the Vixens, her second Liz Ellis Diamond, and went on to be an integral part of the gold medal-winning Commonwealth Games team that thumped New Zealand by 18 goals in the final.

The forward line of Caitlin Bassett, Nat Medhurst, Madi Browne and Kim Ravaillion was one of the finest attacking combinations that netball had ever seen. On the world stage, all Browne’s skills were on display – her poetry of movement, and pure artistry with the ball. 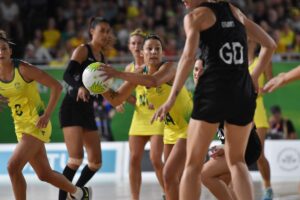 For all the highs of 2014, the following year was brutal. A selection certainty for the Sydney-based Netball World Cup, Browne ruptured the anterior cruciate ligament in her right knee, ruling her out of contention, and making her perhaps the best athlete never to make it to netball’s pinnacle event.

It was a bumpy road back, and the years that followed were strewn with hairpin bends. They featured a silver medal in front of a home crowd at the 2018 Commonwealth Games, international retirement after 61 games for Australia, a cross-town move from the Vixens to the Magpies, another ACL rupture in 2019, and fulfilling a cherished goal of being able to play elite netball alongside her sister. 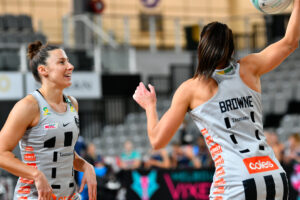 Browne reflected, “I’ve said that my proudest moment would be to step out there with Kelsey, and know that we fought so hard to make it a possibility and be out there with her, knowing her journey, knowing my journey.

“Lining up in round one when I stood in the centre circle and passed it to her, and I knew that was exactly what I’d been pushing so hard for. Not everyone gets to do what they love, with who they love, for as long. Even if it was just seven games, they were seven of the best.”

While disappointment and injury haunt all athletes, it’s fair to say that Browne has endured more than her share. Working with a sport psychologist has helped, as has the support of her family and teammates, and listening to her inner warrior. She said, “I’ve always been that person that as long as I’ve got something to give, I’ll fight and find things to be able to contribute in whatever capacity I can.”

“What’s kept me coming back is that I can be relatable and people are going, ‘If she can do it, I can do it’, and, ’Even though I’m short I can play at that level as well’, or, ‘Maybe I’m not good at this, but I’ve got that skill set’. So I like to think that what motivated me was that I could continue to contribute and I loved it, I’ve always loved it and will continue to be grateful for what it’s given me.” 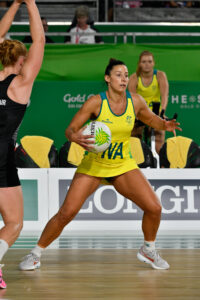 While accolades have flowed for Browne’s brilliance as an athlete, it’s harder to quantify her off-court attributes. The gold standard, perhaps, is that since her earlier years, she’s been recognised as a leader within the netball community. With a string of captaincies behind her, most recently at Collingwood and the Vixens, it speaks to her authenticity and ability to connect with people. Browne said, “I don’t know what this really means to me, or what people are seeing sometimes, but I hope that I’ve just been who I am.”

“It’s been a privilege to be in those positions and have an influence on the way that people have played or teams have gone about things, and clubs have evolved that I’ve been in.” 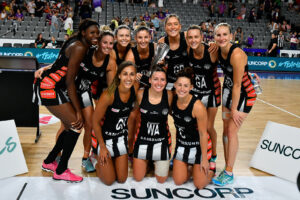 While Browne knew that she was going to retire at the end of the 2020 season, further cartilage damage to her troublesome right knee precipitated the decision. She explained, “Every time I get out there I am grateful for this, I cherish this, but all the work to get up for a game is tedious and taking a toll. I knew that this was always going to be my last one (season) but unfortunately it ended a little bit before I predicted or wanted.

“But at the same time I’m very grateful that I did get out there on court to compete, to see where I was against the world’s best and say, ‘You know what, I can still play, it’s fine but my body has said enough is enough, I’ve given you everything.’ It’s time to look after myself.

“I’ve defied the odds (of juvenile chronic arthritis), and I’m happy that I’ve been able to do what I’ve done. Now I’ve got to respect what my body is saying. I want to live in this body for a lot longer, and I don’t want to have a knee replacement in another 10 year’s time.

“Netball, I’ve loved it and I’ve given it everything, and it’s given me so much. The time is right. I do want to play again, and that very much is a possibility although not at the elite level. But I do have to make decisions now rather than in the last game, or push through it and hope for the best, when it could be 10 times worse.”

From the time Browne’s parents first introduced her to netball, to the day of her retirement, she has been captivated by the sport. In summing up her decision to retire, she said, “I still played some great netball this year, and I’m happy to finish with that, still loving the sport, and still with the passion to give back and want to be involved, rather than ‘I don’t want to be here ever again.” 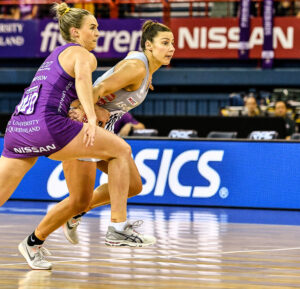 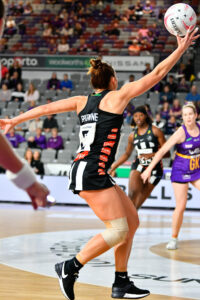 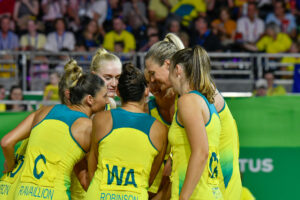