A reflection on her 50th National League netball match, the 2021 SSN Season and inspiration on and off the court.

Amongst the mayhem of interstate travel and rescheduled matches, having a consistent and inspiring teammate goes a long way.

Celebrating her 50th national league match in Round 10 with a win against the West Coast Fever, Mahalia Cassidy reflected with Netball Scoop on the game.  “We were obviously disappointed with our game the week before and haven’t had a great track record against the Fever, so it was really cool to come out and execute that performance- probably our best one of the season”.

Cassidy explained to Netball Scoop about the joyful celebrations of this milestone post-match: “Lightning as a club and the team put on some really special celebrations leading up to the game. It was special to be able to share it with Cara [Koenen]. We started off the same pathway and we’ve grown up playing netball together and it was cool to be able to reach 50 games with her and the celebrations afterwards were just emphatic in terms of the team”. 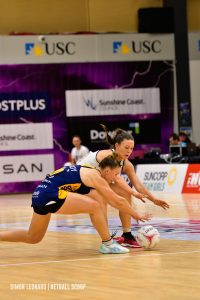 Despite the challenge and sacrifice of this unpredictable time – “more difficult than it was last year as last year we had a set plan” – the love of the game and the camaraderie within the team supports maintaining collective grit.  “Everyone has handled it so well. We are quite adaptive, and we’ll do anything to keep the game alive. We love netball and it’s great to still have it going”.

During these challenging times, the ability to maintain this team culture is imperative. Cassidy discussed how the Lightning have fostered team morale, saying, “The culture of the Lightning and the team morale is only building with each game, and I feel like with the win against the Fever we really found our brand of netball.”

“We all bond over our dogs. So many players in the team have dogs. We get along with each other off the court, so it was great in the last couple of weeks. We’ve all been away, and we’ve had some really fun activities being able to connect together but also reconnect with our loved ones back home. We did a trivia night and a few light-hearted activities which help to keep our spirits alive while we are away and unsure of what’s happening”. 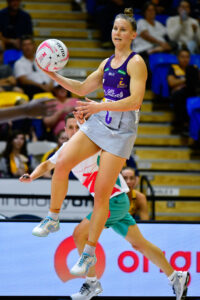 Mahalia Cassidy was a consistent performer for the Firebirds, before switching clubs to the Lightning. Image Simon Leonard

Cassidy started her elite netball career as a Queensland Firebird in 2016 and signed with the Sunshine Coast Lightning for the 2021 season. She commented that the switch has been refreshing and has come at the right time. “It’s been really lovely to come into the group. The Lightning is obviously a proud club and rightfully so, and it was great to come in and be so welcomed. There are a lot of familiar faces, but there has also been new faces and a lot of internationals that I have been able to get to know across the season. I am really enjoying my netball, I am really having fun, so I hope that reflects on court”.

And it certainly has, alongside the strong connections that she has established with both the attacking and defensive ends. “I find playing the centre role a natural, easy thing. I know the front line of the shooters and Shezzy (Laura Scherian) have a really great connection so for me, it’s about filling the hole, and fitting in and being that connection and that link when I need to be”.

When asked about the experience of playing in wing defence, she replied: “The wing defence is definitely a new role but it’s something that I’ve enjoyed. I have enjoyed the challenge and having Maddy McAuliffe there, we switch a lot between WD and C, so we just pretend it is the same thing- no matter what bib we are we are still defending our two mid-court players. I feel like I’ve built a really strong relationship with her, and it keeps getting better”. 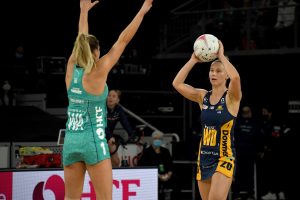 Open and honest communication has also assisted the formation of these strong connections on the court. “Everyone is so open, and we are very honest communicators at training. We are there to get the job done. I think we went through a lot, and we achieve a lot at training, which hopefully then we can produce on game day.”

In the video created by the Lightning for Cassidy’s 50th national league match, her teammates describe her as calm and collected, tenacious and hard-working. When asked about her work ethic, Mahalia reflected, “That’s something that I want to be known for, so it’s nice to have the players speak so highly. I pride myself on working hard. I just want to set the standard at training and hopefully, that comes into games”.

Such tenacity and consistency were demonstrated when Mahalia returned to elite netball in 2020 after two ACL injuries (2017 and 2019).  “Sports injuries come as a part of the sport, it’s something that is the worst part of the game, but I’ve also learned so much and I know that I’ve grown so much as a player and as a person. Obviously, resilience and mental toughness come into it. I am lucky to be surrounded by a strong support network, in my friends, my family and the club as well.”

“It’s nice to be able to sit back and reflect on where I’ve come from and be really proud of where I am at the moment”.

To overcome such hurdles, Cassidy comments on where she draws her inspiration: “I find every netballer is inspiring and there’s nothing more that you want than to have team success, so to be able to work hard to be part of that is truly something special”. 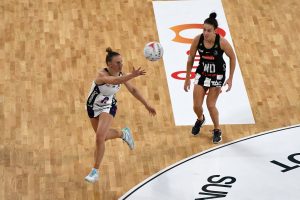 Some careful footwork around the circle by Mahalia Cassidy. Image Aliesha Vicars

With excellence in elite sport comes expectation and pressure. But Cassidy says that she chooses to focus on her role on court and knows she can also turn to other players in the team for encouragement.  “I try not to think about the expectation at times. I think just about what my role is in the team. If I do my role right and I beat my opponent, I’ll contribute to the team and hopefully, we’ll get the win.

“So, if I do feel stressed or a bit overwhelmed, I just turn to the person next to me and get confidence from them. I’ve learned a lot from Karla [Pretorius]. She is such a cool and calm player and I think whenever I feel stressed, I turn to her and she’s like, it’s fine, it’s all good. So that’s how I deal with it.”

For the remainder of the season, Cassidy tells Netball Scoop that she will be focusing on sharpening her defensive game and her ability to shut down players, whilst staying in control for the full 60-minutes. As a team, “Our aim is to go out and win every quarter, if we win every quarter, we win the game so we can’t lapse. We just have to build and get better throughout the game.”

Outside of netball, Mahalia is an Occupational Therapist (OT) and works 2-3 days a week, which helps her balance her netball commitments. “If I’m enjoying myself off the court it’s always reflective on the court so I work as an OT a couple of times a week.” 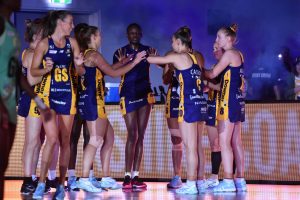 Sunshine Coast Lightning have bonded over their dogs, among other things. Image Marcela Massey

To overcome stress and setbacks, Mahalia reflects that surrounding herself with loved ones – her partner, family, and dog – is essential to her resilience, as they help put struggles into perspective.

When she is not working or playing netball, Mahalia says that she is enjoying life on the coast at the beach. “I am a bit of a beach bum and often take the dog out for a walk on the beach, which is the beauty of living on the coast now. I enjoy spending time with family, and I love going out and eating at restaurants and cafes and hopefully in the offseason, I’ll get to go adventure around the coast some more.”

Mahalia laughs when asked, ‘What is one thing that the fans do not know about you’ and says, “I also enjoy puzzles. In my off time I do a lot of puzzles…when Covid came last year, and we were locked down, they came back into my life”.

As I finished my conversation with Mahalia, it was announced that the reminder of the 2021 Suncorp Super Netball season would be played out in South Australia (and now Queensland!). The dedication of all teams’ players, coaches, umpires, officials, and families that have ensured the Suncorp Super Netball can continue is commendable.

A timely lesson for us all now is one of the biggest learnings that netball has afforded Mahalia.

“The tough times never last, you get through them and there’s always something better on the other side. Work through it and you will reap the rewards down the track”.