NS EXCLUSIVE: Maisie Nankivell – the importance of being yourself

NS EXCLUSIVE: Maisie Nankivell – the importance of being yourself

Determined, hard-working, and prepared are three words Adelaide Thunderbirds Captain, Hannah Petty, has used to describe Maisie Nankivell, and Netball Scoop would add inspirational and impressive to that list.

Vice-Captain of the club, Maisie was also a dual code athlete, who was drafted and played AFLW from 2018, but retired at the end of 2019 after receiving her full contract with the Adelaide Thunderbirds for 2020. In her first season, Maisie was the recipient of the SSN Rebel Rising Star Award, and the Club Champion Award (alongside Shamera Sterling). Maisie joined the leadership group in 2021, only after only one full season at the club, demonstrating her outstanding work ethnic and commitment to the club.

“I am someone who doesn’t really like to settle with where I am at. It’s always what can I be doing? I was brought in as a temporary replacement in 2019. And that’s probably when I got an opportunity to try to prove myself and then the following year, I was offered a contract and I’ve been at the Thunderbirds ever since.”

“As a Vice-Captain, my role is to continually to live those values and set high standards for girls to follow and obviously support Hannah our captain in her role and be that supportive team member that all the girls can come to and confide in.” 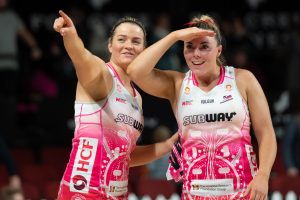 The importance of familial connection is not foreign to Maisie, who grew up in a town of 400, and this is evident through her personable and compassionate leadership style.

“When you play at a high level, there are a lot of challenges, knowing that the girls can come to me and I am able to listen, give them advice or just being a friend to them. I really value knowing that they can come to me and as a Vice-Captain I can support Hannah around any decisions that are being made and any sort of hard conversations that need to be had. I know that I have her back and my team mates back and we show that unity and support for one another.”

Alongside her work for the team, Maisie has been finessing her role on the court between the centre and wing attack position.

“At the start of the season I was trying to work out what my role was. Last season I was playing wing attack and this season is a combination of both. I think it’s being that consistent player and a player that the team can rely on whether I be thrown into centre or wing attack and can do my role out there.”

“Tayla [Williams] is a good impact player and does her role very well. I have played a lot of state netball with Tayla, and I think we do have that natural connection with each other.”

As a sportswoman, Maisie has often described her playing style as unorthodox. She explained to Netball Scoop what she means by this.

“I would classify myself as being more unorthodox, just because I’m able to use both sides of my body. If I am stuck on my right, I can switch onto my left without any worries.”

This ability has been fostered in the family home by someone very special to Maisie.

“Ever since I was young girl, I wanted to make sure that I could use both sides and someone who’s like huge in helping me practice with that was my grandma. She would be in the backyard with me throwing the netball doing surprise balls to get me strong on both sides. They are probably some moments I look back on and I’m very grateful that she had the time and wanted to do that with me.” 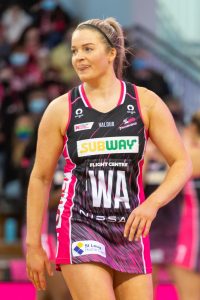 Nankivell on court for the Adelaide Thunderbirds. Image: Sue McKay

As a leader of the group, Maisie’s role extends her focus away from her own game to that of the well-being and functioning of the team.

“From when I was first brought into the team, it’s probably more around what my role was in the team and then now more steering towards a leadership position, it’s about thinking of others first, and how can I get the most out of my teammates and that type of thing.”

“And obviously, we’re quite diverse in our culture and going to get to know the girls and why they play and what motivates them, I think that’s important to build that connection both on and off the court.”

In 2022, the Adelaide Thunderbirds celebrate their 25th anniversary. Maisie speaks to how this reflection on history has influenced her craft as a player and as a leader.

“It is a good celebration of all the players that have come before us and obviously the legacy that they have left. To see that we have a rich history and build our own legacy, that’s special to show the connection and everything that past players have done for the club.”

“Natalie von Bertouch has also been a player I look up to and admire.  I love how hardworking she was, and she was a leader as well. She did everything in her career and epitomises those strong values and she was such a world class player.” 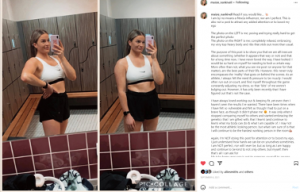 In September 2021, Maisie posted a photo on Instagram which highlighted, in the caption, the pressures around body image that women and athletes are subjected to and her struggle with this.

When asked about her motivation to write the post, Maisie pointed out how important it is to use her platform and voice to raise awareness around this pertinent issue.

“I think it was something that had been on my mind for a while, but I know that at the highest level, you’re always in the spotlight. I just wanted to get back to the message out there and be honest about how I was feeling. If that’s the way I was feeling, I know that there would be a lot of other people out there feeling the same way”.

This message helps to humanise the athlete behind the bib and start an important conversation.

“I think it’s a good message to get out there to show that even though we are athletes, we are still human. There are times where we’re hard on ourselves and I think it’s part of who we are, and that message was something quite genuine and raw. It’s something close to my heart.”

“I got a lot of feedback from my followers and young girls who thought this would not be something that I would worry about. At the end of the day, we’re all human and we all have our insecurities and vulnerabilities, and I think it’s just important to get that story out there and just be yourself.”

The Thunderbirds Vice-Captain and midcourter perceives the pressure to be both internal and external.

“It’s probably the pressure I put on myself to have to look a certain way. As athletes there is some pressure to have to be athletic looking, muscly and that type of thing. I think that’s not always the case.”

“It’s also the media and how they frame what you should look like.”

Maisie wanted to normalise the impact that these pressures can have on performance and has been seeing a psychologist to ensure that it does not continue to affect her self-confidence. Some of the strategies that she has found helpful include being grateful and focusing on performance, rather than appearance.

“You have to be grateful. I am grateful I get to play the sport I love at the highest level. If I am performing and getting to play in the team that I grew up loving, that is the most important thing, rather than what I look like or how others perceive me.” 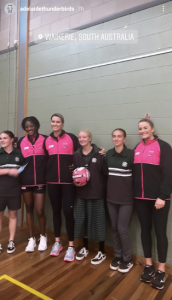 It’s important for Nankivell (far right) to share the message that athletes and people come in all shapes and sizes. Image courtesy of Adelaide Thunderbirds Instagram account

Constructing a positive and supportive environment is also paramount.

“One of the strategies to manage the pressures is to surround yourself with people who build you up and see the value in who you are and what you bring and want to get the best out of you.”

“There are some Instagram pages that don’t make you feel good about yourself. You have to decide what is the best for you and unfollow the ones that don’t serve you.”

For those reading who may personally be or know someone who may be struggling with body image, Maisie has these words for you:

“Do what makes you happy. Be yourself and be you. The more you are real and genuine the more that people will value you for who you are”.

“It’s more about what you get out of your body. If you’re performing the external look shouldn’t matter.”

As I spoke with Maisie, she, along with Lenize [Potgieter] and Latanya [Wilson], were off to a school clinic in Waikerie for over 200 children. They were each giving a personalised talk on topics of resilience, mental health, and managing study and elite sport.

I took the opportunity to ask Maisie about how she builds resilience and manages her setbacks and triumphs.

“The setbacks and challenges offer a lot of learnings; they motivate you to prove people wrong and show what you are capable of. They add fire to get back out there and do what you love. There are little silver linings everywhere.”

“I try to remain as positive as possible and focus on the why behind why you play netball or go to trainings.  The why for me is my family and making them proud in what I am doing. That is my motivation.”

“There are a lot of things too around loving sport, being active, being competitive, but at the end of the day having my family there watching me is very important.”

“It’s important to have fun along the way and getting to know the girls off and on the court and form friendships along the way.”

“When you are having fun and having that confidence within yourself and your team, that’s when you really start to enjoy the games and you’re playing your best netball.” 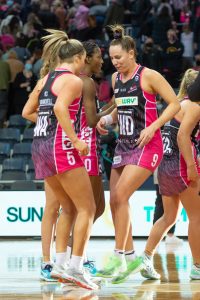 Maisie is an impressive athlete with the ability to create strong defensive pressure and drive hard in attack. But sport is not just about the physical.

“You can work hard physically but you have to have that mental aspect and that confidence and drive with yourself to believe that you are capable of anything.”

To strengthen her mindset, Maisie is studying a Bachelor of Criminology, which provides her with balance.

“I grew up surrounded by police officers. As a young kid I was always asking my parents about their job and watching crime documentaries and anything to do with the law. My current degree will put me into criminal profiling and forensics.”

“Having a life balance is important to switch off from netball.  I like catching up with friends, going out with family, going out for brunch or coffee; spending quality time with friends and family who I don’t get to see often.”

Maisie shows us the importance of creating a balanced life, one with a strong support network of friends and family, a positive digital and physical environment, an optimistic mindset, enduring self-belief, and the confidence to truly be yourself.