Some may call them the unsung heroes of Australian sport, while others may have less positive things to say, but love them or hate them, umpires are the backbone of netball. Keeping the games in check has never been more demanding, on and off the court, in Suncorp Super Netball season 2021.

High performance umpire squad member Tim Marshall is one of 12 that officiate SSN games each week, and relocated to support the completion of the season.  Marshall usually lives in Melbourne but is currently based in Queensland in the hub for the final few games.

Starting as a men’s player, Marshall moved up the ranks of playing before moving into the high performance umpiring pathway and receiving his AA accreditation. He has umpired over 40 SSN games in the last four years and more than 1000 games at all levels.

‘I really love playing, but the professional pathway is limited as there are no Commonwealth Games for the male teams. However, as an umpire you can reach the elite level regardless of gender and it was a fantastic way to keep involved in the sport at a high level.’

‘I love being a part of the netball community and the best competition in the world. I have made great friends through netball as everyone, from umpires to officials to players are all so friendly, and this really makes it the best league in the world on multiple levels.’ says Marshall. 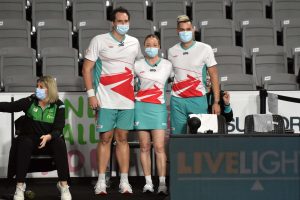 Like players, umpiring takes up a huge amount of hours outside of game time.

Physical training such as strength and conditioning, running programmes, and general gym training to avoid injury on top of game reviews after each game can see the umpiring load reach close to twenty hours a week for one game.

‘We review each game afterwards, which can take up to 4 hours, checking decisions that were correct, ones that were incorrect, positioning, time to goal line and other factors that can help us improve ahead of the next game.’

‘We are always striving to be better than our last game.’

Umpires are part time employees of Netball Australia. ‘All of the umpire group either study or work full time’ said Marshall.’ Umpiring is an additional part of our lives’. 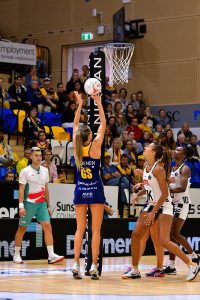 Umpires make thousands of decisions during a game, and need to be well conditioned to keep up with the demands of the sport. Image: Simon Leonard

Both clubs and umpires have had to adapt to the changing conditions due to the global pandemic. While all of the Suncorp Super Netball teams have had disruptive and uncertain times in the 2021 season, the umpiring group have perhaps felt it more so.

‘This year has been so unpredictable. Last season we knew where we were based from the outset.’ said Marshall.

‘This year, I was in Sydney for 3 weeks during the Victorian COVID outbreak, left Sydney just before their lockdown to return to Melbourne with all the teams, then moved to Adelaide as that was where the initial hub would be set up, but our flight was turned around mid air so I missed the cut off to enter South Australia. Returned to Melbourne for a day, before flying to Brisbane, where all the teams are now based.’

Like the players, the elite umpiring squad have made huge sacrifices both personally and financially to keep the Suncorp Super Netball season going, and as solo operators the umpires don’t have the same team environment to rally them when times are tough.

‘I was lucky enough to be able to work remotely for my full time job so I had the flexibility to move with the game but for many of the squad the decision to follow the game across Australia was difficult.’

‘There are umpires that were unable to make the journey into the hub or relocate with the teams as we are only part time workers, and need to work full time to support ourselves outside netball. Many can’t leave their full time job to commit to a part time wage’. 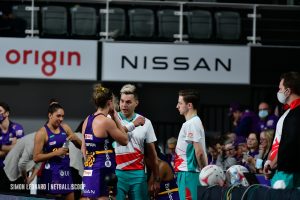 Umpires need to be able to clearly communicate with athletes. Image: Simon Leonard

More than financial sacrifice to keep the game going, there are personal feelings that affect all those who are in the hub.

‘There is also a little bit of guilt, that I am in the hub away from the lockdowns and not being able to be at home when I should be at work and being with my partner during the lockdowns.’ says Marshall.

‘I do find that it can be a bit lonely as an umpire in the hub. The players and staff have each other, and we have an umpiring group, but like the players it can be emotionally draining in the hub.’

‘The uncertainty of this year has added to that feeling. Moving multiple times, new outbreaks has you wondering if we have to move again’.

Extensive COVID protocols in place have created a different feel to game day this year. With now crowds comes no cheering…or booing, so is this the one silver lining for the umpires?

‘I personally like umpiring with crowds, the atmosphere is indescribable, and hearing yourself and the commentators is strange’ 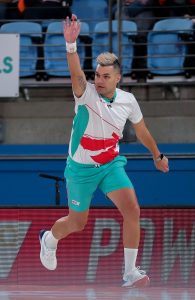 Tim Marshall – has been on the move both on and off court this season. Image: May Bailey

As the game progresses and the players develop so must the umpiring. This means the umpire group must have the support, both on and off the court, to move with the pace of the game.

‘With the athletes becoming full time and playing netball as their profession, the quality of the game is excellent, and we have the best league here in Australia’ says Marshall.

‘The new rules do throw up challenges for the umpires, and while the athletes adapt to the new rules, so do we and our techniques,’

‘Things like changing our positioning on the goal line during the super shot period, to accurately view the outer ring area, compared to the first 10 minutes of the quarters takes training and practice for umpires.’’

With new rules, more dynamic players and game play is it time for umpires to be professionally recognised too?

‘Netball is becoming more competitive as a sport, and this is being recognised, and there is more pressure to ensure umpiring is growing at the same level as the athletes.’ 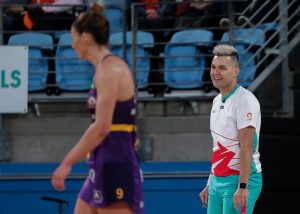 Occasionally there’s time for a light hearted moment on court. Image: May Bailey