Nat Medhurst was an elite netballer for a very long time.

“Seventeen years,” she laughed. “Go figure! If I’m brutally honest, I don’t have any physical attributes. I’m not one of those players who is incredibly quick or really good in the air. I’m not strong, and I don’t have height that works for me.”

While Medhurst is quick to point out her flaws, it’s less tangible assets that kept her at the top for almost two decades; a Phar Lap sized heart, titanium strength mental toughness, and a serious dose of white line fever. Added together, they made her into the player she was. They made her a legend.

Medhurst grew up in a laid back country town where sport was taken seriously, but doubled as entertainment. She could have drifted along the same relaxed route, but for a teacher who recognised her talent, and parents who helped her to develop it. Together with running a pub and bringing up four children, Trevor and Jo-Anna Medhurst made the eight hour weekly commute, taking their daughter to netball training in Adelaide. 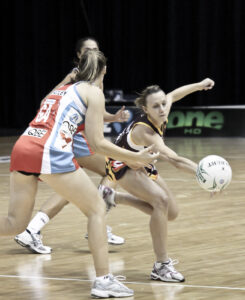 Snaffling an intercept for the Firebirds. Image Simon Leonard

From the example her parents set, Medhurst learned the value of hard work. It was one of the key traits that made her successful for so long. She explained, “You need a high set of standards.

“A lot of young athletes coming through think it’s a given, they might be having a good season, but it is only their first or second season. But it’s the ability to do it again, and again, and again. That’s very hard, and to keep performing at that level, then take it to the next, and stay there for a long period of time.

“It takes a huge amount of effort, so you need a certain set of standards that you hold yourself to, and keep challenging yourself on.

“At the end of the day you have to do the hard work. As one of my favourite quotes says, ‘There are no short cuts to anyplace worth going.’ And for me, that started very early on.”

While Medhurst joked that she wasn’t particularly athletic, she never underrated her fitness. She said, “I do have a good engine, I can run all day, and my work rate is high. And I had such a competitive streak – I needed those sides of me to get through matches and embrace the challenges that game day would bring.”

Throughout her decorated 86 test cap and 235 national league match career, Medhurst could always be relied on to be running just as hard at the end of a game. It was particularly important when results went down to the wire, as New Zealand found to their cost in the 2011 Netball World Cup final. With just forty seconds on the clock, and Australia staring down defeat, Medhurst had the legs and the timing to get to a contest, snaffle an intercept, and send the game into overtime and eventual victory. 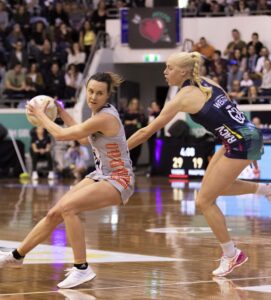 Nat Medhurst’s elusiveness made her difficult to stop on court.  Image Kirsten Daley

Medhurst’s greatest asset however, was her court smarts. The goal attack seemed to have an innate sense of where her teammates were, what defensive structures her opposition were setting up, and where the next pass should go. Her goal shooters could have had ‘x marks the spot’ tattooed on their fingertips, so accurate were Medhurst’s feeds into the circle.

She said, “That’s what I needed to rely on in games, and I was constantly working on that, understanding what was going on, and challenging myself on it.”

And while the physical approach of Australia defenders was a proving ground, her eyes lit up like pinball machines at the space marking approach of New Zealand opponents, chief rivals at most international tournaments. Some athletes would view a sea of black dresses spread so thickly across court that they didn’t know where to dive in, but Medhurst saw a wave of opportunity that she could surf to the end.

Her elusiveness, timing, and ability to find the gaps out on court were important to the Diamonds during a sustained period of dominance. Across the course of her international career, Medhurst became one of just eight people to win three Netball World Cups, and she topped it up with Commonwealth Games gold and silver medals. 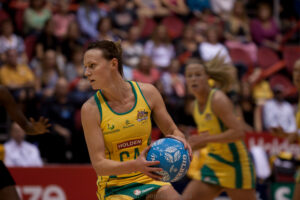 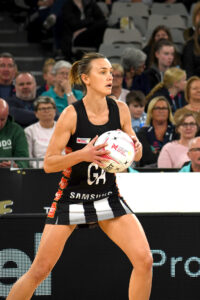 In action for the Collingwood Magpies, 2019. Image Aliesha Vicars

If the netball court was Medhurst’s playground, it was also her casualty ward. While lucky to stay clear of season ending injuries, she had plenty of lesser ones along the way.

There were two sets of fractured ribs, busted lips, black eyes, a crook neck, dodgy ankles, and at one point, a friendly fire induced blood spill so prolific that it needed a tampon applied rather unusually in her nose to slow it down.

The damaged ribs were sustained against some close-checking defenders in both the 2018 and 2019 finals series, and given how often Medhurst handled the ball, the pain must have been intense. Pain-killing injections were used to keep her on court, and while she was below her best at some points during those matches, her courage was never in doubt.

Towards the end of Medhurst’s career, she was criticised for the number of goals she’d put up during a match, and it played a role in ending her international career. She explained, “There are players who are shooting less than I was, who are getting praised. I would be getting slammed. So yes, I played less games for Australia than what I would have liked, but a hell of a lot more games than I ever would have dreamed of.

“The thing with netball is there is nowhere for you to hide as a player. You are singled out quite closely and it can be brutal at times. I’m lucky, because while it’s not the case for everyone, if someone questioned my ability I used it as a driving force. I used it as ammunition to try and get the best out of myself. It did require a certain amount of mental toughness.” 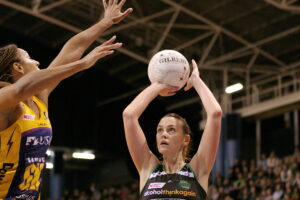 Originally a goal attack who would put up more than twenty goals per game, Medhurst identified the introduction of tall, holding shooters as a factor in her declining volumes. Team game plans started to rely heavily on getting the ball close to the post, something which didn’t faze her.

“I’ve never been someone who chased the numbers, I couldn’t have cared less how many goals I was putting up per game. What I cared about was what was best for the team, the end result. I knew that I could put up the shots when I needed to, but if there was a better option, or I used my ability to set up a play for someone else, I was going to do that.”

“I always went about my business ultimately so the team could be successful, so whatever my role was at any given time, I tried to make sure I was doing that.”

“That’s the thing with me, I was more critical of myself than anyone else could be. It’s not always a good thing, but it pushed me to try and get everything out of myself and my teammates. I know I’m not perfect, and sometimes I didn’t go about it the right way, but it was always from good intentions to get the best out of myself, and for teams to have the success that we were after.” 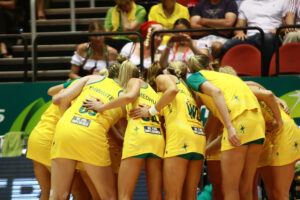 As her career progressed, Medhurst found that she particularly enjoyed working alongside younger athletes such as Kim Ravaillion, Gabi Simpson and later Jess Anstiss. It was while encouraging their development that she found her voice on a range of player welfare issues.

“Both in sport and in life, resilience is very valuable,” Medhurst said. “People go through things that you have no idea about, so being able to check in with them and see how they are coping is incredibly important. You need to have an ability to put yourself in their shoes.”

Netballers who know Medhurst well say that behind the tough game day face, she is a warm and empathetic person, one who regularly checks in to see how they are. With that welfare of her fellow athletes in mind, and her trademark honesty, she’s never been afraid to speak out, making Medhurst a perfect fit for a role with the Australian Netball Players’ Association. A delegate for a number of years, she went on to be President for the last three.

She said, “Netball has made me very real. Some people might say I’m controversial, but I don’t think so. I will say what everyone else is generally thinking. There is no point grumbling behind closed doors; if there is something that needs to be addressed, it should be done professionally and then everyone can move on.” 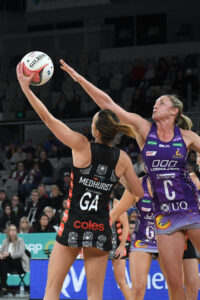 Medhurst never shied away from the physical nature of the game. Image Aliesha Vicars

The experiences gained across seventeen years of elite netball, and the ability to support her fellow athletes, saw Medhurst recently accept a role with Commonwealth Games Australia as their Community Engagement Manager. Together with setting up education programmes, she will work closely with past and present Australian athletes during the lead in to the 2022 Birmingham games.

Describing the role as “an opportunity too good to pass up”, it was responsible for Medhurst’s retirement. She said, “I only made the decision a couple of weeks ago, it was never set in stone that I’d retire at the end of this season.

“I still feel like I’m capable of being out there on court, and contributing well rather than just making up the numbers. And motherhood didn’t come into the equation. I do believe you are capable of doing both, and while I love being a mum, that wouldn’t have stopped me playing either.

“But retiring for this opportunity felt good, and I’m comfortable with the decision. If I’d kept on playing I always would have questioned whether I was doing it for the right reasons. I still love competing, and that will be the biggest thing that I miss. At this level, you don’t play just to have fun. You’re there to chase success, and that’s what I’ve always been about.”

While Medhurst never got to say an on-court goodbye to her legion of fans, it’s fitting that a new generation of athletes will benefit from her experience and longevity in sport. And surely, among those she will mentor, there will be many that will remember the legend. 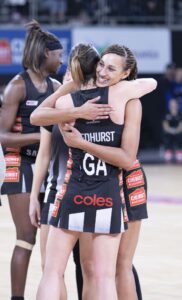 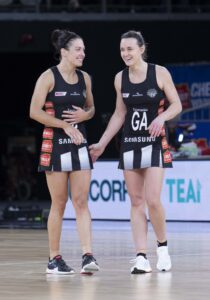