When the decade began, netball fans were wondering when (or indeed if) Australia and New Zealand would ever be challenged. Other nations had been able to beat them on occasions, but not consistently and not on the biggest stage.

At the very start of 2010, England took it right up to Australia in an exciting three-match series that the Diamonds eventually won 2-1. But when it came time for the first major tournament of the decade, it was still Australia and New Zealand that found their way to the final.

The Commonwealth Games final in Delhi on Thursday, October 14 is still the longest match ever played. And it’s still the greatest. Not just of this past decade, but probably any decade. This was truly an epic contest between the sport’s two greatest rivals.

After starting slowly, New Zealand gradually began to get on top as the match wore on. So much so, that they were up by seven goals early in the fourth quarter and things looked grim for Australia. Enter Cath Cox, and she very quickly turned things around.

At 47-47 and with just a minute left in normal time, legendary kiwi shooter Irene van Dyk inexplicably panicked, went for a shot well outside her normal distance range, and missed. Luckily for her, Cox also missed just moments later at the other end with what would have been the gold medal-winning shot. After four quarters, the sides were dead level.

As the match went into extra time, Maria Tutaia started getting cramps in her calves. Despite that (or maybe because of it), she then completely took over the Ferns’ shooting end. van Dyk was almost consigned to the role of spectator as Tutaia continued to put up shot after shot.

With extra time running out though, it was Australia that had the edge. They looked in control, one goal up and with the next centre pass, before a nudge from kiwi captain Casey Williams saw her Australian counterpart Sharelle McMahon penalised for breaking. The kiwis duly equalised and that meant we were going to sudden death.

A margin of two goals was now required for victory, and early on Cox found herself with another chance to win it for Australia. Unfortunately, her shot once again rimmed out, and so the game went on. And on and on. It appeared as if it would never end.

Time after time, Tutaia would sink critical long-range shots under pressure, only to see Cox do exactly the same in response. It was an engrossing and captivating contest, the likes of which we’d never seen before, and it ticked over into its 84th minute, before finally being resolved in a rather bizarre manner.

With Australia in possession and looking to equalise yet again, wing attack Kim Green suddenly slipped over, throwing the attack end into confusion. McMahon wasn’t able to find another teammate quickly enough and was called for held ball.

This was now New Zealand’s big chance. They steadily worked the ball down court, eventually finding Tutaia in the circle, and she calmly turned and took the shot from two-thirds distance. Just as with most of her other shots in this game, it never looked like missing. Final score: New Zealand 66 Australia 64

The kiwis were absolutely ecstatic; the Australians were just gutted. Neither team deserved to lose but someone had to. On this occasion, it was the New Zealanders celebrating deliriously. So often, these two nations have produced something special, but this match took it to a whole new level.

There were great performances from players on both sides, but the hero was undoubtedly Tutaia. Up until this match she had been somewhat derided as inconsistent and poor under pressure. On this day she stood up under the greatest pressure imaginable.

In club netball in 2010, the Adelaide Thunderbirds, well led by Nat von Bertouch, won their first title in eleven years. Their new Jamaican goal shooter Carla Borrego starred with 40 goals as they beat the Waikato-Bay of Plenty Magic in the ANZ Championship grand final 52-42 in front of 9,300 screaming fans in Adelaide.

There was consternation from some with the fact that Thunderbirds had been allowed to play two imports (Borrego and Geva Mentor). Up till this point, the import rule was judged on a case by case basis, leading to some real inconsistencies, but that was now to be changed. No more than one import per club.

This rule would also lead to much controversy in the years to come as Thunderbirds tried to gain Australian citizenship for Borrego, so they could then bring in another import. In the meantime, it was Mentor that was forced out and she found her way to the Melbourne Vixens.

The 2011 ANZ Championship season was a drought-breaker for the Queensland Firebirds. For so long the easy beats in the previous national league, they had promised much but failed to deliver so far in the new trans-Tasman league. This was Roselee Jencke’s second year in charge and they put all the previous failures to rest with a season of complete dominance, going through undefeated.

The shooting combination of Romelda Aiken and Nat Medhurst was exceptional, but it was an all round team effort with no weakness. Even after their captain Lauren Nourse suffered a season-ending knee injury in round nine, vice-captain Laura Geitz just calmly took over the reins and they marched all the way through to the grand final and a 57-44 victory over Northern Mystics.

Nourse wasn’t the only big name injury during the season. On Thursday, March 31, Melbourne Vixens were hosting Firebirds. During the second quarter, Sharelle McMahon went down in a rather innocuous manner without a player near her. Sadly, she had ruptured her Achilles tendon.

McMahon had enjoyed a fine start to the season and was looking in great form. As the Australian captain was being helped from the court, some fans no doubt thought the Diamonds’ World Championship chances were going with her. It was Nat von Bertouch who took over as skipper of the Australian team, while Nat Medhurst slotted into McMahon’s position of goal attack. Medhurst did an incredible job and was one of the players of the tournament in Singapore.

The World Championship final on Sunday, July 10 was another classic trans-Tasman contest and it produced yet another incredible finish. New Zealand got on top early and led by six at half time. But as we’ve come to expect from these clashes, that meant little. Changes were made for Australia as Laura Geitz and Caitlin Bassett came on for Susan Fuhrmann and Cath Cox.

The Diamonds fought back. With 30 seconds left however, the Silver Ferns were one up and had possession. Medhurst then came up with an unbelievable intercept. Bassett converted the turnover to level the scores, then missed with another shot right on full time which would have won the game.

So we were off to extra time. Again. At this stage, netball fans were getting quite used to seeing more than 60 minutes of netball between these two teams. And there was nothing in it right throughout extra time. In the final minute, von Bertouch actually thought she’d blown it when a stray pass gave the Ferns possession and a chance to win.

Unlike the previous year in Delhi though, Tutaia missed with what would’ve been the winning shot. Geitz was on hand to quickly snap up the rebound, the Australians sent the ball down court and Bassett did the rest, scoring in the last second and sparking wild celebrations from the Diamonds. This time it was the kiwis left dejected.

This match marked the end of an era, as it was Norma Plummer’s last game in charge of Australia. In August, Lisa Alexander was announced as her successor. Meanwhile, Ruth Aitken also stepped down as coach of New Zealand in October and handed over the reins to Waimarama Taumaunu.

Over a span of 8 years with Plummer and Aitken at the helm, the two countries had played each other 35 times, Australia winning 18 matches to New Zealand’s 17, with 57% of their games being decided by 5 goals or less. Now, that’s a rivalry! 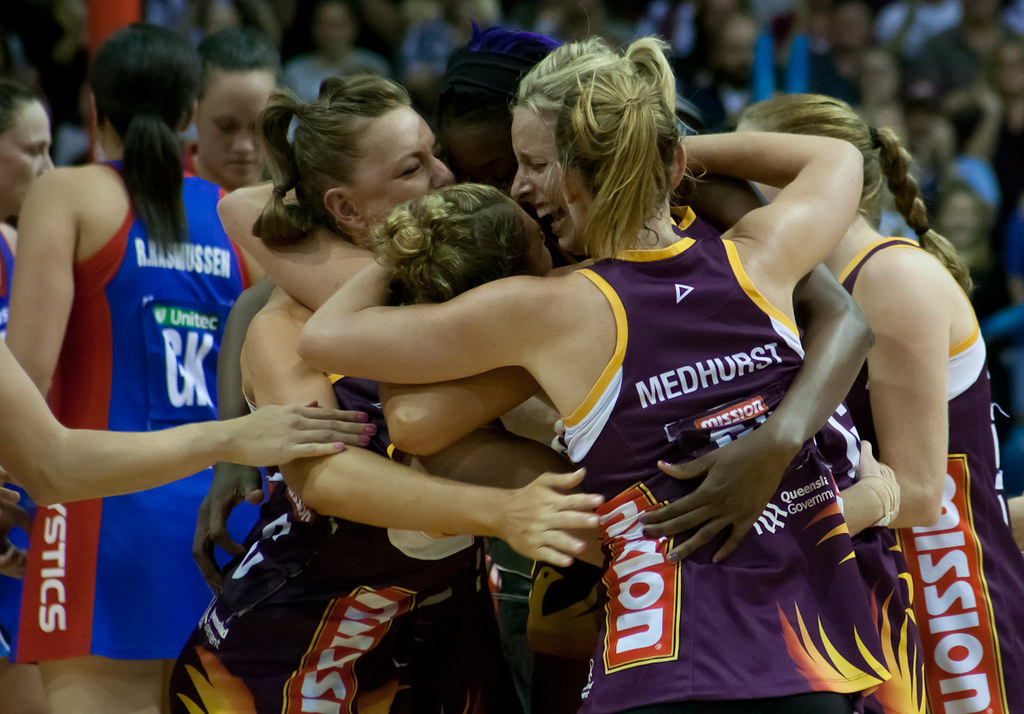 It was an off season of much upheaval heading into the 2012 ANZ Championship. Norma Plummer went straight from international to club coaching as the new coach of West Coast Fever. And she took a big name signing with her in Cath Cox. Lisa Beehag had replaced Julie Fitzgerald as Swifts’ coach, and incredibly, Cox wasn’t part of her plans.

Meanwhile, Thunderbirds tried in vain to recruit Jamaican shooter Jhaniele Fowler. Their attempts to gain citizenship for Carla Borrego were still unsuccessful. And in New Zealand, Janine Southby and Natalie Avellino were appointed co-coaches at Steel, an arrangement that didn’t last long.

In round four of the season, the Waikato-Bay of Plenty Magic came to Melbourne to play the Vixens. Both teams were at opposite ends of the table, Vixens having had three wins, Magic three losses. After leading for most of the game, the visitors were overrun in the closing stages with Vixens’ defence getting on top and snatching an exciting one goal win.

So used to being one of the competition frontrunners, Noeline Taurua’s team was now dead last, without a win in four matches. But fast forward to grand final day and incredibly it was the same two teams meeting in the same city.

After that round four defeat, Taurua successfully galvanised her team as they went on an extraordinary unbeaten run, climbing the ladder all the way to the big one. And the grand final was eerily similar to round four. On this occasion, however, it was the Vixens who were on top for most of the match, but unable to put the game out of reach.

Thanks to the defence of Casey Williams and Leana de Bruin and the calmness of Laura Langman, Magic finally seized control in the last quarter and took out the match 41-38, their twelfth straight victory. This was the first (and only) ANZ Championship title won by a New Zealand side and it was a special moment for Irene van Dyk, playing just a week after the death of her mother.

There was another ANZ Championship game that really hit the news in 2012. On Sunday, May 20, the Vixens’ shooters, most notably Karyn Howarth, had several shots at goal blocked spectacularly by Mystics defender Anna Harrison. At first, people wondered how she was doing it, but after a while, it became obvious that her defensive teammates, Kayla Cullen and Jess Moulds were in fact lifting her up.

The move, later dubbed the “Harrison Hoist”, was the subject of much debate. Was it in the spirit of the game? As it stands, the hoist is still legal to use today, but only if the shot is on the way up; not on the way down through the goal. Occasionally, defenders will try it but nobody has been nearly as successful as Harrison was on that Sunday afternoon in May 2012.

The year ended with a busy international season. The Silver Ferns completed a good year for New Zealand netball by taking out the Constellation Cup for the first (and only) time, with a 2-1 series victory. The Diamonds then exacted some revenge on the kiwis by winning the Quad Series which also featured England and South Africa. As 2012 came to a close, it was clear that at this stage, Australia and New Zealand still dominated the international scene.