The votes are in. It’s time to reveal the results in Netball Scoop’s World’s Best Netballer poll for 2019. Each year, we collect the thoughts of ten judges, who nominate their top five players in the world and rank them from one to five. This year, our voting panel consisted of Erin Delahunty, Liz Ellis, Sue Gaudion, Cara Gledhill, Tamsin Greenway, Rona Hunnisett, Andrew Kennedy, Katrina Nissen, Jenny Sinclair and myself.

As usual, it was a tough task for our voters. There are so many top performers at club and international level each year, and you can’t vote for them all. As a result, some fine players missed out altogether. In all, a total of fifteen players received votes, with a third of them coming from the World Cup winning Silver Ferns. Meanwhile, in a sign of the times perhaps, only three Australians made the list. There were also three English players, with the best placed being Magpies’ brilliant goal keeper, Geva Mentor.

Mentor had come out on top in our poll in each of the past two years. She had another fine year in 2019, but she’s set such an incredibly high standard for herself, it’s difficult to live up to that. This year, she finished tied for sixth with Ash Brazill on six votes, therefore relinquishing her crown, but who would say she couldn’t possibly reclaim it next year? Rona Hunnisett commented that “if Geva’s in the team, you’re already ahead of the pack and have a much better chance of winning than without her! She’s a true global superstar.”

Firebirds goal attack Gretel Tippett was the highest placed Australian player in fifth spot, with eight votes. With an unconventional attacking game, she keeps improving year on year, and 2019 was her best yet. In a Firebirds team that struggled, she was one shining light. It seems the Diamonds haven’t quite found the best way to capitalise on her height and athleticism yet, but when they do, she (and they) will prove very hard to stop.

Now, here are the players who finished in the top four – two New Zealanders, one South African and one Jamaican. These players dominated the voting from early on and it was well deserved as they all had terrific years. 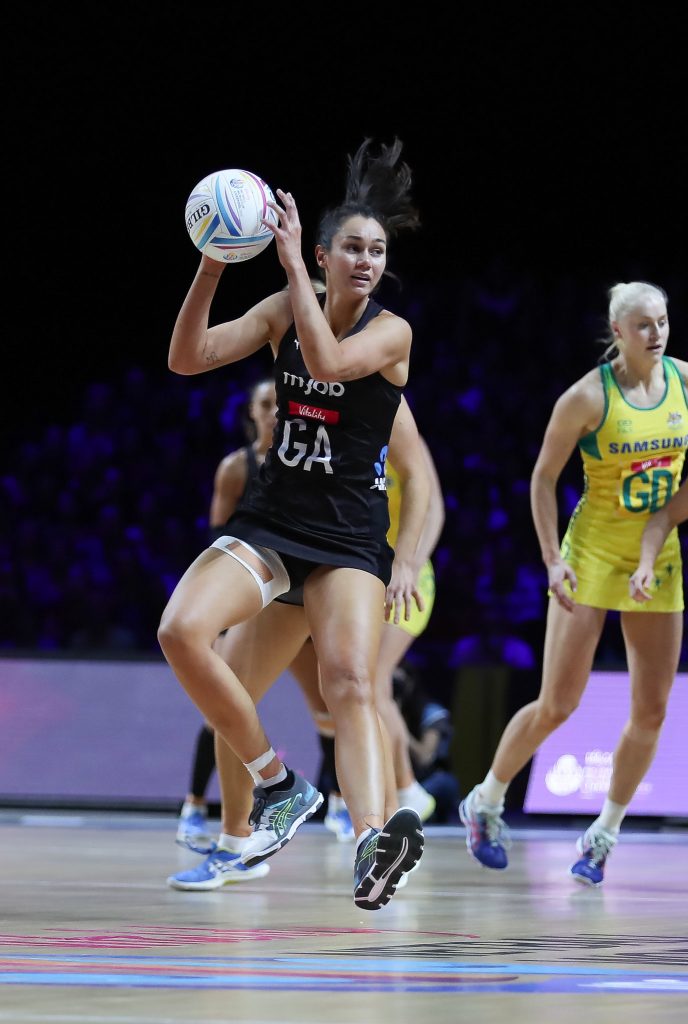 Ameliaranne Ekenasio in action at the 2019 Netball World Cup. Photo: May Bailey

Pulse and New Zealand shooter, Ameliaranne Ekenasio finished in fourth spot on 14 votes. It’s no doubt she has been one of the revelations of 2019. A World Cup win and an ANZ Premiership title, has been just reward for a fantastic year. Ekenasio’s improvement in recent times has been all-important to New Zealand’s return to winning ways. She has always had the skills and always possessed a sweet shot, similar in many ways to that of her Silver Ferns shooting partner Maria Folau. In the past however, she lacked consistency and maybe even commitment, but that’s no longer the case.

She now delivers excellent performances game after game, and although outwardly you wouldn’t know it, it’s clear she possesses a steely determination. When the heat was on in the World Cup final, and a player needed to stand up, it was Ekenasio who did just that. While the Silver Ferns as a whole played terrifically well, they simply wouldn’t have won without her extraordinary game at goal attack. Seven assists, three rebounds, 20 centre pass receives and most importantly 24 vital goals from 26 attempts under immense pressure from the Australian defence. 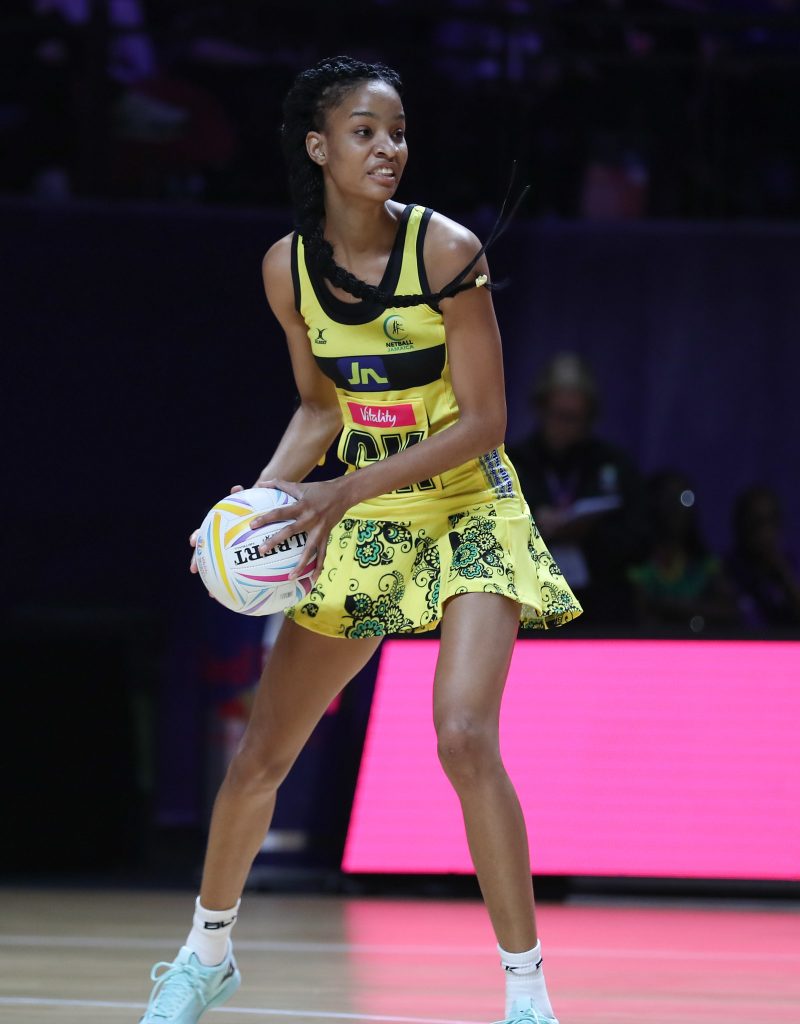 Finishing in third spot, just one vote ahead of Ekenasio, is Thunderbirds and Jamaican defender Shamera Sterling. Coming from the UK Superleague where she had dominated statistically, she did exactly the same in her first year in Suncorp Super Netball. Although Thunderbirds managed only three wins and two draws, that was in no way down to Sterling who lit up the court in an incredible fashion. She just kept racking up the stats and was consistently one of the best on court week in, week out.

At the end of the Super Netball regular season, Sterling led the competition in most intercepts (68), most defensive rebounds (35) and most deflections (120). At first glance, there is not much about Sterling that would make you think she could dominate as she does. She is very slight and not incredibly tall, but what she possesses is great elevation, speed, and an ability to read the play and be in the best position to pounce on any opposition mistakes. Only 24 years old, her best years should still be ahead of her, which is a very scary thought for opponents. 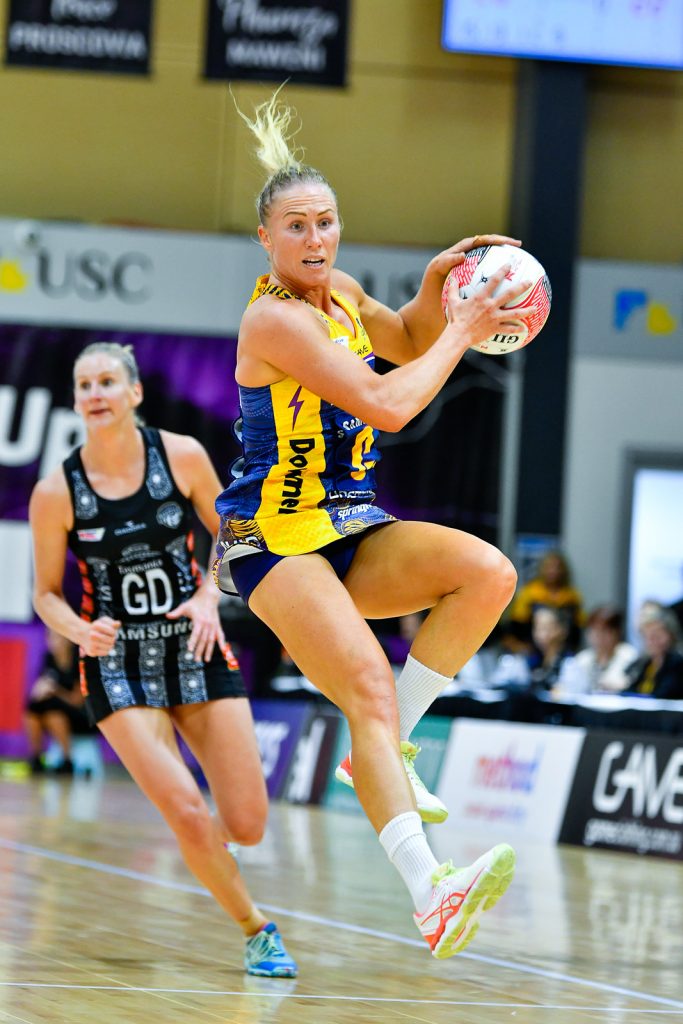 This is the third time in four years that Lightning and New Zealand centre and captain, Laura Langman has been runner up in our poll. She actually finished a staggering 24 votes ahead of third placed Sterling, showing how much the vote developed into a two horse race. 2019 was a brilliant year for Langman, and it’s easy to forget that she was off the scene for most of 2018. Here she was, back to her inspirational best, fit and firing, running non-stop, and leading the Silver Ferns to an incredible win in the Netball World Cup in Liverpool. Her calming influence was crucial in the final minutes, as the kiwis completed an unbelievable turnaround from the horror story that was the Gold Coast Commonwealth Games.

From a great victory to a humbling defeat and one of the highlights of the year, when Langman gave an incredible speech on Super Netball grand final day. Lightning had been well beaten by Swifts on the day, but the way she spoke in such a natural, charming and down to earth manner drew praise from many. Langman is now much more than a great netballer, she’s a great ambassador for the sport as a whole. She’s achieved so much already, so what does the future hold for her? Well, she’s back at Lightning in 2020, but apart from that, who knows? Let’s just make sure we enjoy whatever time we have left watching one of the all time greats of the sport.

Liz Ellis – “She is the fittest player in the world, and is able to take control of a game. The fact that her body can go where her mind wants for a full 60 minutes makes her incredibly dangerous. She’s also an amazing team player.”

Sue Gaudion – “Once again Laura Langman has raised the bar in 2019. I feel like she found a way to stand out in all three major tournaments this year, the World Cup, Super Netball and Constellation Cup. She is the barometer of performance for any team she plays for, and on the rare occasion her form waivers, often her team loses. Her increase this year in goal assists and feeds, and general possession gains makes her lethal in the midcourt. I thought defensively her World Cup was outstanding.”

Katrina Nissen – “Laura’s year away from netball was just the recharge she needed. She returned this year even more of a weapon than before. But it’s her off-court presence, which truly impressed me this year. What I love most about her is her willingness to own her mistakes and learn from them. In the last pool game of the World Cup, she ‘botched’ the chance to draw the game against Australia. Her response: “Whoops. I messed that up, didn’t I?” This ownership of mistakes and the ability to see the humour in them sets a great example for everyone. She is an ideal role model for all aspiring athletes, not just netballers.” 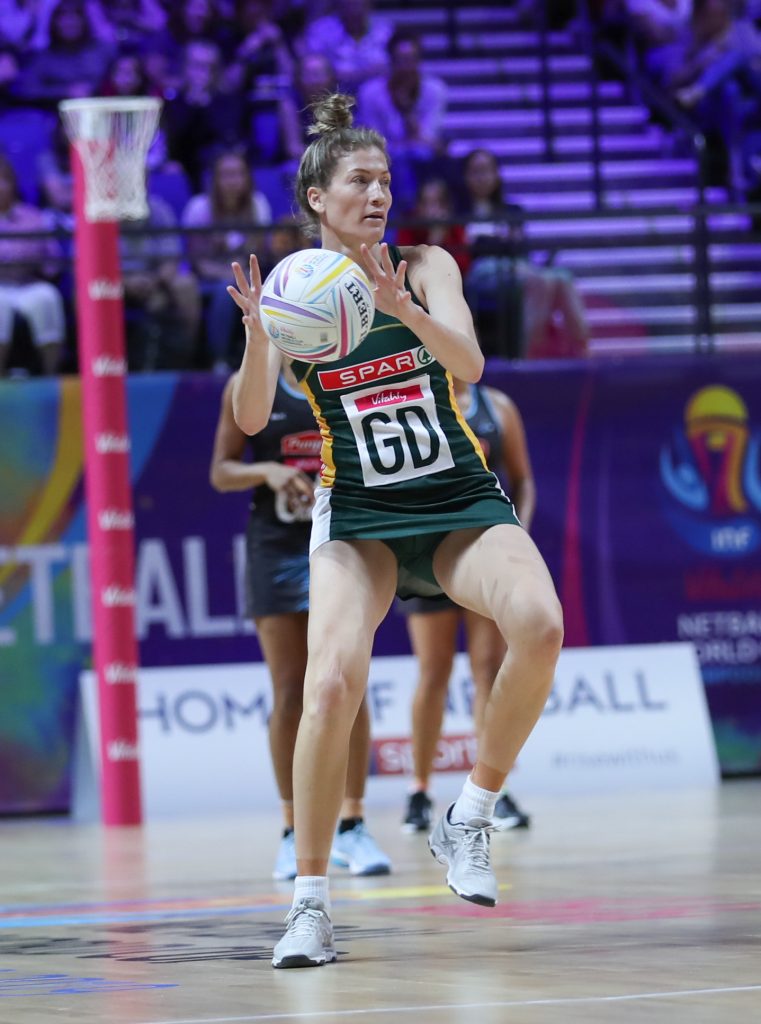 Karla Pretorius in action at the Netball World Cup. Photo: May Bailey

The accolades continue to roll in for Karla Pretorius in 2019. Player of the tournament at this year’s World Cup in Liverpool, she had already won our Super Netball MVP award earlier this year and she now adds this title to the list. The South African defender finished six votes clear of her Lightning teammate, Langman. The maximum number of votes possible is 50, and Pretorius this year received 45, equalling the total of Sharni Layton in 2016. Pretorius has had an outstanding year. In fact, she has been in tremendous form for a few seasons now, but this year she just took it to a whole new level and dominated.

She is the queen of goal defence and seemingly plays the position like nobody else. Not content to just wear her opponent down, she also attacks the game and pulls off the big defensive plays. In Super Netball this year, Pretorius took 69 intercepts in 16 matches, far in advance of the next GD on the list. She possesses incredible reflexes, the likes of which we’ve rarely if ever seen before. Added to that is unmatched timing and anticipation, whereby she seems able to read the passer’s mind, predict where the ball will go, and before the passer has time to realise their mistake, the ball has been snaffled.

There were some occasions this year where Pretorius had a quiet quarter, or even a quiet half. When that happens, you’re really just waiting for her to spring to life, because it is almost impossible to keep her quiet for a whole game. If nothing is happening for her or her team, she will do whatever she can to make something happen. She is at the top of her game right now, and with Cape Town hosting the next World Cup in 2023, you’d think we’ll get to enjoy her presence on the netball court for at least four more years.

Erin Delahunty – “Coming to elite netball relatively late and giving away height and size to almost every opponent, Pretorius has no right to be a superstar; but a superstar she is. A mix of tenacity, tactical smarts and old-fashioned mongrel makes the 29-year-old a game-changer. She wears opponents down with sheer persistence and physical presence, but somehow always stays out of penalty trouble. She was instrumental in helping the Proteas make the medal play-offs at the World Cup for the first time in 24 years.”

Cara Gledhill – “Pretorius was the best performer across the Super Netball season and a well-deserved MVP at the Netball World Cup. She’s on the short side for a circle defender but more than makes up for it with her speed to the loose ball and her impeccable reading of the game.”

Tamsin Greenway – “She is the ultimate defender, her speed and athleticism is second to no one but it’s her ability to read the game and gain an intercept that is impressive. This year she has not only performed at club level, but internationally and she always pops up to get the ball when you need her. She’s just a class act.”

Andrew Kennedy – “Pretorius has the bewilderingly perfect timing that is the key to unlocking the game of netball; she spots the attacking weakness that nobody has before, and she exploits them with fierceness and jaw-dropping timing. Now out of the shadow of Geva Mentor at Lightning, she shows just how damaging she is, for Sunshine Coast and for South Africa, being the most important player for the Proteas in their World Cup success. Apart from that, she is also a wonderful human and a great icon for followers of the game.”

Jenny Sinclair – “Pretorius took all before her this year as the best player at the Netball World Cup and also in Super Netball. She’s a genuine game-changer, and she does this while keeping her penalty count extraordinarily low. Her growing partnership with Maweni will be a highlight in years to come.”