Africa is the sleeping giant of netball. The continent’s most popular women’s sport continues to rise, with three nations now firmly in the top 10, a further two sitting just outside it, and women’s and men’s netball continuing to gain prominence. Their female athletes play in competitions across the globe, showcasing some incredible talent. A small but dedicated team of South African netball enthusiasts have joined Netball Scoop as we lead into the Netball World Cup in Cape Town, 2023. A huge welcome to Kyle Fortune, Sindiswa Ganda and Arnold Cote as they bring us the latest news out of Africa each month.

The biggest news coming out of South African netball and the continent of Africa is the broadcasting deal made for the 2023 World Cup in Cape Town. On the 2nd of March 2022, Netball South Africa introduced SuperSport, the most widespread sports broadcaster on the African continent, SABC the country’s biggest television broadcasting service along with Telkom, Africa’s largest integrated communications company, as being the broadcasters for the 2023 NWC. As part of their commitment to netball, for the first time an all female production crew will be in place. Their aim is to ‘Bring netball back to the people’.

The development of netball on the continent relies on young girls being able to see a reflection of themselves on the world stage along with the necessary grassroot level skills to equip the female African athletes of the future. This new deal has been branded the biggest World Netball broadcasting deal of our time, not just providing coverage to South Africa, but the continent and the world.

This comes a few weeks after the completion of the SA Male Netball Championships in Upington, Northern Cape. It brought together the top male netballers from around the country for a week of incredible netball, as 42 teams battled it out across six divisions. The home-grown team, ZF Mgcwagu District took home the championship with Kwamdile Sithole named as the Player of the Tournament in the senior division and Njabulo Nekhvhambe in the u23 division.

The rise of male netball in the country has been a long time coming from grassroot level and townships in South Africa. It was taken to its highest point early this year with an exhibition match at the launch of Netball SA’s ‘Netball Friday’ event, on the 4th of February 2022. This saw the SA male netball team take home an eight-goal victory against the Protea’s with a final score of 26 – 34 to the male team. There seems to be a vibrant, enthusiastic approach to transformation of netball in recent years on the African continent which has been brilliant to watch for many locals.

South African netball fans sit in awe of the sheer amount of talent being produced in the Protea pathways with international leagues back up and running. We have witnessed six of our Protea’s signed to Vitality Super Netball League teams in the UK back out on court. With the return of Shadine van der Merve from a knee injury and the late signing of the stalwart Phumza Maweni to Team Bath, athletes are already showing promising performances in their first matches back.

The highlight for many South African fans in 2022  has been the luminous Ine-Mari Venter. The shooter, who has travelled quite a bit playing netball, seems to have finally cemented herself not just in the national side but at club level in the Vitality Netball Super League. Shooting in the high ninety percentages from anywhere in the circle, taking multiple Player of the Match awards and appearing in the leagues team of the week, Venter has proven to be an unbreakable force. Her consistency and focus on the court, teamed up with her gracious flair is something that has found a special place in the hearts of South African netball fans and fans from around the world.

With the 2019 Netball World Cup Player of the Tournament, Karla Pretorius, ruled out of the Suncorp Super Netball season due to the welcome news of her pregnancy, Lenize Potgieter will be the only South African international playing in that league 2022. After missing a lot of international duty last year for her emotional wellbeing, Potgeiter has shown the world why she has been South Africa’s number one shooter for most of the last decade. 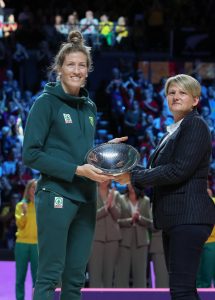 Karla Pretorius was MVP at the 2019 Netball World Cup, and the once in a generation defender will be a key out for South Africa during the 2022 Commonwealth Games while she is on maternity leave. Image May Bailey

Taking the court for the Adelaide Thunderbirds in the Team Girls Cup, Potgeiter was strong and accurate in goals. Her ability to overcome adversity, her perseverance and dedication has resulted in a massive opening to her 2022 campaign. Potgieter’s agility, fierceness, incredible splits, and deadly accurate nature at the post has not gone anywhere. It leaves some big decisions for the Protea selection team for the upcoming Commonwealth Games, with Venter pushing for starting seven honours.

Many South African’s will not forget the close call in the Quad Series 3rd place playoffs in January this year, with a narrow one goal loss to New Zealand. It shows that despite player retirements and unavailability, South Africa is very much still within reach of the top four teams. They have a tough draw in the Commonwealth Games, being in the same pool as Australia and Jamaica, which will test their depth and readiness as contenders for the gold and the Netball World Cup trophy.

Congratulations are extended to umpires Anso Kemp and Elizna van den Berg who have been selected to officiate at the Commonwealth Games.

What is undoubtable, is that there is so much more in store for Netball SA and Netball Africa in the upcoming months and year as we approach a groundbreaking era of netball on the continent. Keep your eye opened to the development of these nations as netball continues to build as one of the biggest female sports on the globe.

About the Author: Kyle Fortune