“The team that can overcome the obstacles of Covid, travel and tour disruptions the best, will be the one that comes out with the gold medal around their necks at Commonwealth Games.” Kiri Wills

By Katrina Nissen and Rona Hunnisett

That was a really impressive performance from Australia, who stepped up and found another gear in the second half. The work rate of the English defence, particularly Layla Gusgoth and Serena Guthrie, was immense but sadly they weren’t able to maintain the pressure throughout and errors started to creep in.

Ellie Cardwell had too much room to move at the start, and so the switch of Courtney Bruce out to goal defence and Sarah Klau into goal keeper allowed Australia to close down the opportunities for her. Liz Watson put in an amazing effort and Paige Hadley was particularly impressive in both attack and defence.

Gretel Bueta playing goal shooter is, frankly, terrifying how good she can be – she played with Steph Wood as an U19 and that understanding was obvious throughout today’s game, despite some huge pressure from the English.  Ash Brazill and Paige Hadley did some great zonal work on the circle edge which slowed up the ball into the English shooters. 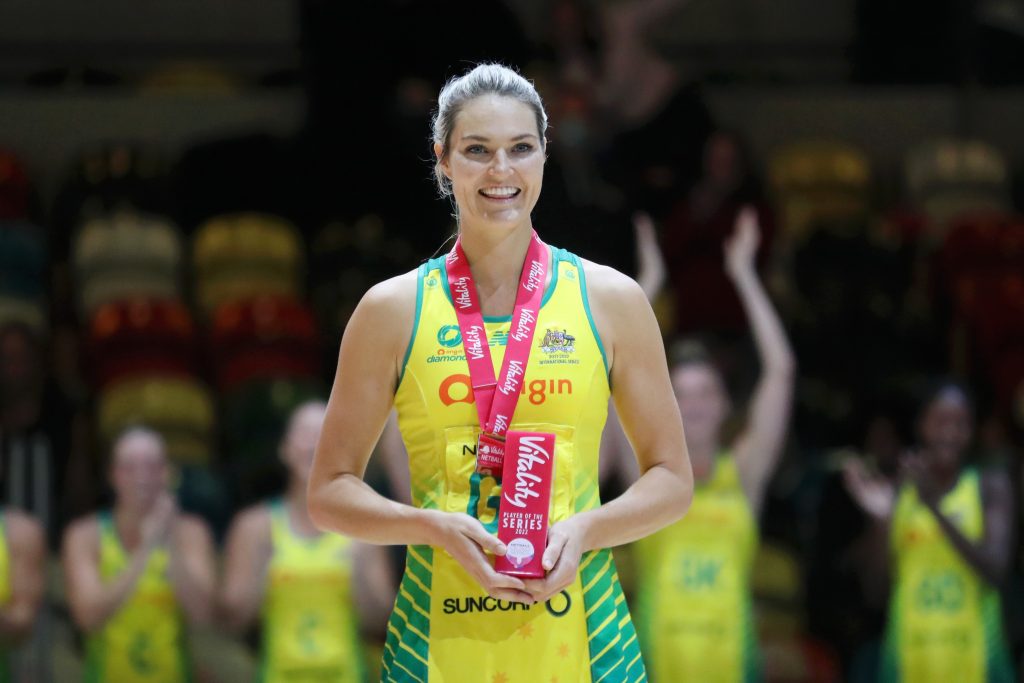 Australia just found another gear today and took real responsibility to get the win.  England didn’t do anything wrong, but it’s a mental effort as much as a physical one to win games like that and there were times when the English side eased up the pressure.

As far as selections are concerned for the Commonwealth Games, it would seem that the eight players who took the court for Australia will be going to Birmingham, and Ash Brazill seems to have answered the questions about who will be wing defence. I’d expect to see Jamie-Lee Price get the nod over Kate Moloney because she offers at centre and wing defence. As far as circle defence is concerned, we’ve now seen what Sunday can do, so it’s a question of whether Stacey takes her or opts for Maddy Turner.

The big question for the English selectors is probably still the shooting circle – do they take George Fisher or add Sophie Drakeford-Lewis as cover for wing attack as well as goal attack.  There’s certainly a lot of competition, and Jo Harten is still to return, who gives the English more mental motivation when the going gets tough.

I’m thrilled for Stacey Marinkovich, Nicole Richardson and the rest of the support staff who’ve done a great job to get everyone to England and playing so well.  I’m really looking forward to seeing what this team does in Birmingham. 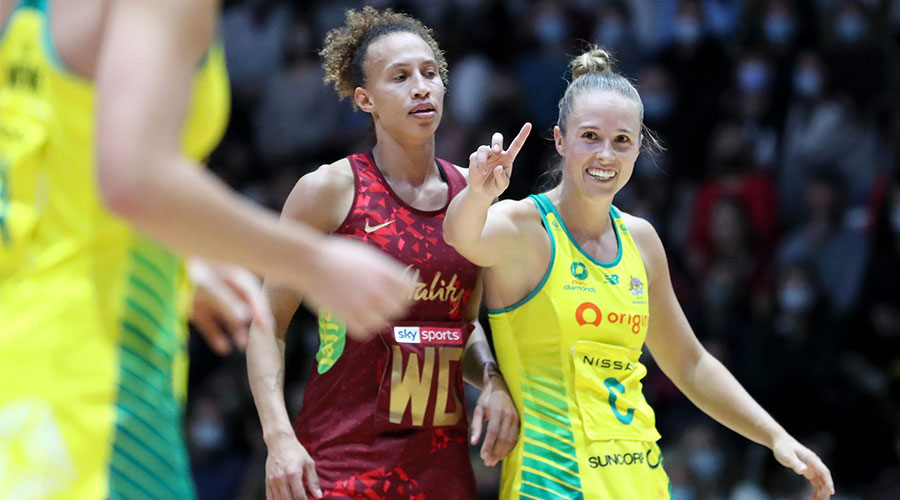 I’ve been impressed with Jess Thirlby’s changes over the Quad series, but I thought they needed to settle their line in the attacking end in the final. Eleanor Cardwell and Helen Housby were doing a great job, and I’m not sure why personnel changes were made, rather than just a positional switch.

I also felt England needed someone with the experience of Jade Clarke in centre.

I was really impressed with Australia after such limited match play over the last few years. It’s great to see Ash Brazill back out there after her injury, and it was also terrific to see Gretel Bueta get such significant court time. She’s dangerous wherever she plays, and her connection with Steph Wood was great.

Both teams have considerable depth, and selection is still wide open for both teams.

I was impressed with South Africa, as they turned around their performance and had an answer to what they’d struggled with the day before.

Ine-Mari Venter had an amazing game, and I really liked the pace of goal attack Lefebre Rademan. If we think about weaknesses in the Ferns going forwards, it’s not the first time our defensive structures have been opened right up by a really quick goal attack. Sophie Drakeford-Lewis did the same thing during the Taini Jamison series. She would hold off, then cut hard around the circle so the defenders either have to commit and pick her up, or hold off and allow her to get the ball. That’s something we need to think about tactically as Helen Housby (England) does exactly the same thing.

Bongi Msomi was outstanding at centre, and one of the players of the match. She fed from anywhere, and when it was on, she’d let it go – she just nailed it. She’d hold onto it if they weren’t ready, or she’d let it fly if they were. She does need to sort out her penalty count on the outside of the circle, but they were trying to get hold of the ball. That’s one of the issues with moving a wing defence into centre, as New Zealand have done recently. They often don’t have a feel for that change of rhythm that a shooter needs, or have a split second of indecision when the ball needed to go. 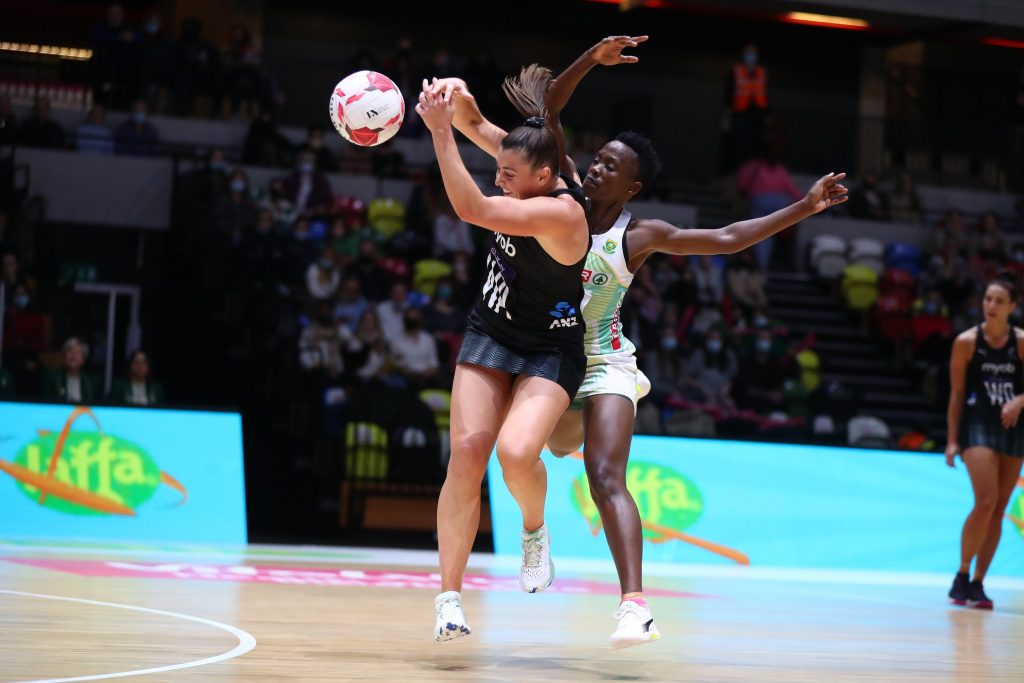 While she was consistent for her team, South African captain, Bongi Msomi will need to tidy up her contacts before the Commonwealth Games. Image: England Netball

Shadine van der Merwe would add to their transition when she returns from injury, which is an area the Proteas need to work on. Izette Griesel was quiet at times – they need a more active wing attack if they want to put the top teams under pressure, because teams are concentrating on shutting Bongi down. Izette balanced the court beautifully but she needed to get more involved, although she did have the challenge of Karin Burger against her.

I was really impressed with the South African coach, Dorette Badenhorst –  she has enormous shoes to fill after Norma Plummer and was missing a lot of experience in her team, but after this tournament I think she has buy-in from her players.

Defensively for New Zealand, tight structures let the team down a little bit. They needed to be more mobile and get off the body, to confuse the space and shut it down. The circle defenders didn’t get as much hand to ball and it’s because South Africa pulled us wide – their middies were happy to play on the sidelines, so it was too far away for the goal keeper and goal defence to come hunting. With the shooters coming out, and helping carry the ball to the circle edge, it relieved that pressure around the outside of the circle.

In the midcourt – Karin Burger is a powerful athlete, and putting her out at wing defence provided just a little more coverage. Her and Kaylia Johnson’s arms over the ball at times really helped stop the quick early feed in. However, I’m not sure what this means for Sam Winders. She was Silver Ferns Player of the Year in 2021, and while this was an opportunity to test other players at wing defence, Noels (coach Noeline Taurua) will reward form.

At wing attack, Gina is very consistent, although I know she’ll be disappointed with any connections into the circle that weren’t quite tight. With that young shooting end, they did need some care at times, and I would have liked to see the Shannon Saunders and Gina Crampton combination supporting them, because they are natural feeders. 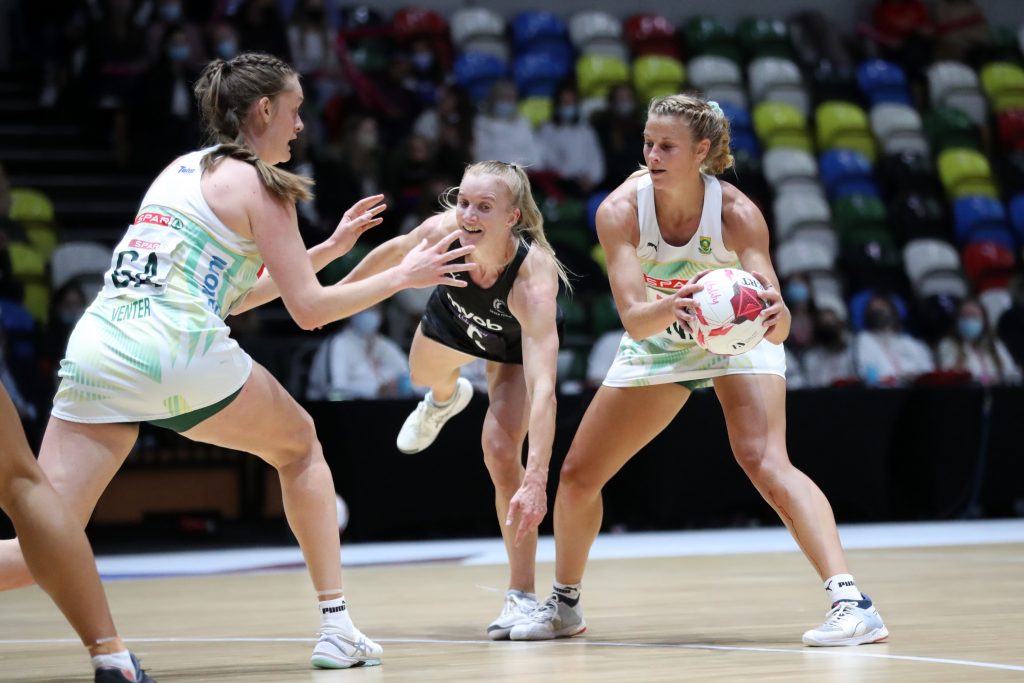 Will Shannon Saunders make the Commonwealth Games side after not getting court time in the Quad Series finals? Image: England Netball

While I know Claire Kersten and Sam Winders are working on that aspect of their game, it depends on what you need in a match. Do you need a centre that is going to look after their shooters, or one who is going to provide protection on defence, and I felt the shooters needed more of an attacking centre to support them.

While Claire played really well today, it will be interesting to see what the Silver Ferns do moving forwards with the centre position. Kimi Poi is the most pure centre that we have in the country and is solid in both attack and defence, and I wonder if her pace and elusiveness in attack could have got us out of trouble in the attacking side of the game. Most of the other midcourters find their defender, then presents to the ball. Kimi does that, but she also has the speed to change direction quickly, and change things up.

In the shooting circle, I loved Tiana Metaurua’s play, but she took her second shot late in the second quarter. When New Zealand has won World Championships, we’ve had two shooters prepared to go to post when the ball gets in the circle. That’s a real concern for us if Ameliaranne Ekenasio doesn’t get back on her feet – we only have one genuine goal attack option at the moment.

Maia Wilson’s shooting was amazing this series. Grace is still missing some of the simple shots, and while she gets most of her rebounds, that’s not going to be a given against some of the international defenders.

I do think the shooters need to go to the post earlier if the opportunity presents. There were times when a defender was standing down, and New Zealand took that extra pass to get closer to the post. However, we also saw Maia got called for contact because she used her arms while the defenders were positioning around her body. It’s only a small fix, but critical moving forwards when playing games at this level. 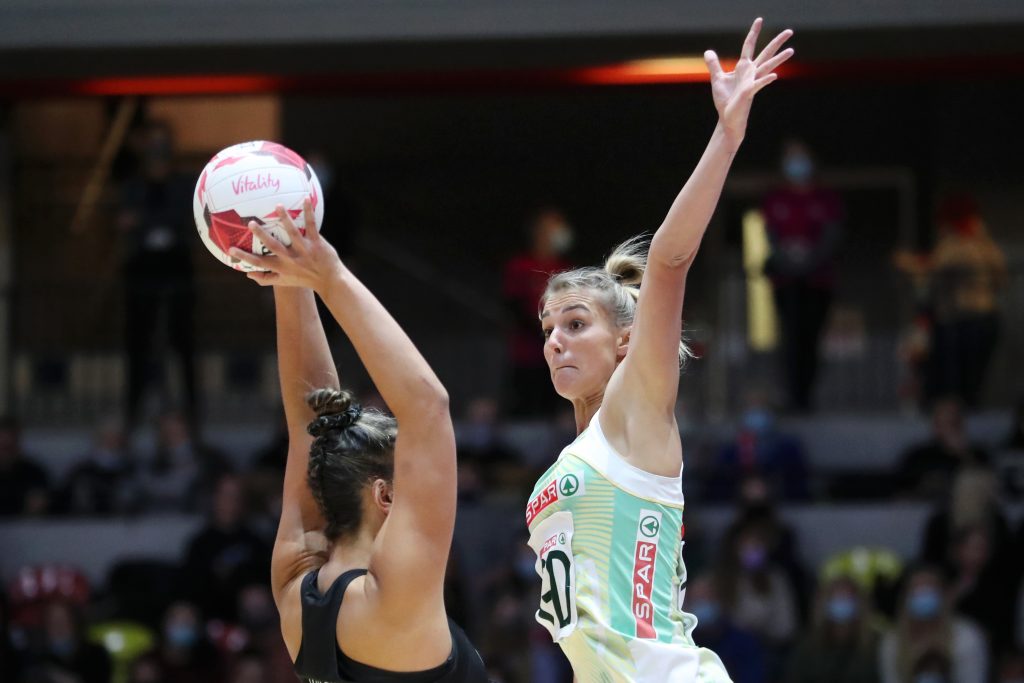 Playing against them, South Africa’s goal keeper and goal defence need to be a little bit more mobile and get off the body, because as soon as you get on Maia’s body you can’t get around her – she’s too strong on the hold. Geva Mentor and Layla Gusgoth are quite good at it for England, but it’s an area Australia and South Africa have to improve on. Either to use their footwork to get around Maia’s hold, or work out the switch to come around her front.

So to really put pressure on New Zealands shooting circle, put two on one against Maia, tighten up midcourt defence outside the circle so Tiana doesn’t have an easy in and out, and make her shoot.

Possession for Silver Ferns is critical and it’s one of Noel’s mainstays in the way that she coaches. It was something that Casey Kopua, Laura Langman and Maria Folau, who all retired after the 2019 World Cup, all did so well. It’s not a weakness, but it’s an area that the Silver Ferns hang their hat on, and a way that the Silver Ferns can reduce their error rate.

The other area for the Silver Ferns to address is who will be the person in defence to win turnover ball. Our turnovers in the first half came from Tiana and Clare, but nothing from our defensive circle, and that’s of slight concern. However, it’s been a great tour for Kaylia and Phoenix to return after maternity leave. They both have great fitness, and will be beasts by the time they finish ANZC, barring injuries.

Logistically, New Zealand will potentially have four mothers in the team for the Commonwealth Games, and I don’t know if the athlete’s village allows babies and children to stay. While Netball New Zealand will bend over backwards to support those families, it may add another dimension to the team. If the children aren’t allowed to be there, it can add an edge to the athlete’s commitment, because of the additional sacrifices they are making to be there.