For netball fans, makeup of the national squad is a Sophie’s choice. An incredibly difficult decision, with no right or easy outcome. That, however, is precisely what national selectors have to do – decide which athletes have the attributes to fit their game plan and deliver success on the international stage. Tonight, on Fox Netball’s Centre Circle, a squad of 18 – which can be enlarged to a maximum of 22 – was named to carry Australia to the Commonwealth Games and the 2023 Netball World Cup.

Who was involved in the selection process?

How did the selection process unfold?

Recently the national selectors have spent as much time on planes as the athletes they are watching, attending at least two Suncorp Super Netball games live every round, while also looking at a range of historical performances, ranging from domestic and international matches, to training camp and footage of opposition.

“That’s very position specific – from what athletes are doing on centre pass, what’s happening in and around the circle, to defensive impact. Numbers are brought to the table, and the selectors have to put it into context – what their SSN team structure might require of them, what skills are transferrable, what skills need work or focus.

“Then there are team dynamics – in a Diamonds’ game plan, how do we think athletes might combine.”

An athlete’s ability to stay in play is also assessed, as – generally speaking – international umpires tend to be less tolerant of Australia’s robust style of play. Marinkovich said, “Penalty counts have gone up across the SSN this year. Under Sharon Kelly (recently appointed as Head of Performance Umpiring Pathways) we’re honing a more international style of umpiring.

“So players will be forced to be cleaner because of the way the game is umpired this season, in comparison to last season.” 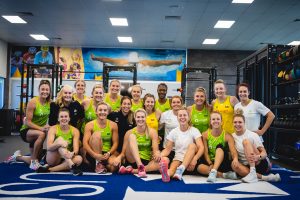 All Suncorp Super Netball athletes made themselves available for selection this year, leaving some fans wondering why various athletes were overlooked.

One of the key issues facing omitted squad members is the fundamental of time. In a pinnacle year, there is usually a mid-season camp before the team is named, where a range of combinations can be trialled and assessed. In 2022’s condensed season, there isn’t that luxury, and the final 12 must be named before the athletes can gather.

As a result the selectors have to weigh up naming a team that have recent familiarity with each other, or one where a few players may potentially not gel on court, and the subsequent inability to change that.

Marinkovich said, “That’s why the selection process is holistic – it has to be what players have previously done in camp, retrospective international form, what did we have at Quad Series, what combinations have worked, as well as current SSN form.

“Because we’ve had such limited international time, we have to back our investment at some point.

“To change a combination, an incoming player would have to be far exceeding who is in front of them, because we literally have 16 days before Round 1 of Comm Games to get combinations firing.”

“There are a lot of quality players on the fringe, and it’s such a hard selection process, players like Kim (Ravaillion), and also Jess (Anstiss), Maddy (Proud) and Verity (Simmons) who were in the squad previously and missed out. It’s not done lightly by any means.”

“With the calibre across the midcourt we’ve kept our squad open and only gone for the 18 (out of a maximum of 22), so there is still room to be selected.” 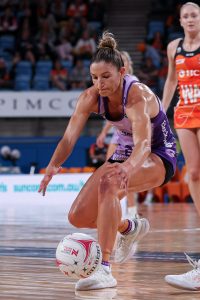 The omission of Kim Ravaillion is causing plenty of chat among fans. Image May Bailey

The Diamonds’ 12, plus three training partners, will be announced after Round 12 of the SSN, as per Commonwealth Games date requirements. In the interim, the group will stay connected, and be fed limited amounts of data – such as opponent intel – so as not to interfere with their domestic season.

Unfortunately, due to the later finish of Suncorp Super Netball compared to other domestic competitions, the Diamonds have less training time at their disposal than most other nations.

Marinkovich said, “We’ve got eight days in Australia before we go, and eight days in the UK, so effectively two weeks on court, plus travel.

“It is short, but we’ve been able to create and build a clear game plan that the squad all understand. We will need to induct Donnell into that understanding, so if we go down the path of selecting her, the transition will be easier.”

The Diamonds will travel with their three training partners, who will take place in squad based practice and match play. Whether the training partners can stay with the team once the Games commence is currently unknown.

The usual rule is that once a pinnacle event starts, the announced team of 12 can’t be changed. Marinkovich said that is hopefully up for discussion.

“Most countries have put forward the need to have reserves that can brought in, in case of a tournament ending injury or Covid. For example, at one tournament South Africa had two knee injuries in the space of two days, which significantly impacted them.

“However, some countries don’t necessarily have the funding to take more players, so the Association has to make sure any ruling is fair and feasible to all. We don’t know how they will rule as yet.” 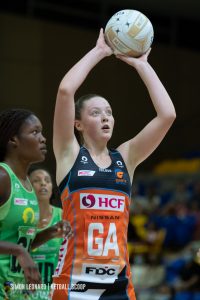 Sophie Dwyer travelled to England for the Quad Series, but didn’t take the court. Will her time come this year? Image Simon Leonard

With seven squad members named – a larger group than usual – Marinkovich said it was important for the selectors to keep their options wide open. “We’ve worked really hard to increase the depth of shooters across the league, and we need to look at who gets selected, who gets partnered up, and what we need across both positions.

“Some players have important attributes but have had interruptions, and they have time to evolve in the next few weeks.

“Kiera Austin, for example, has needed time to get her game sense, connection and timing back, and in the past few weeks her accuracy and turnovers have shifted. Players need a chance to hit their stride, particularly when they are coming off a significant injury or Covid.

“The phone call to Donnell is one of those moments you cherish. It was a complete shock for her, and I think shows just how focused she was on making the most of her opportunities at Firebirds. She’s done that, and she has a skill set and attributes that drew our attention.” 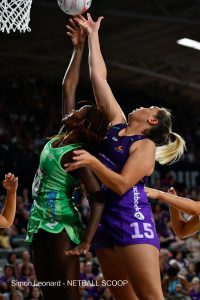 Donnell Wallam was the only new addition to the Diamonds’ squad, and has a strong chance of being included in the team in the next 12 to 18 months. Featured here against rising star, Sunday Aryang. Image Simon Leonard.

Narrowing down this talented group will be one of the selector’s most challenging decisions. So what factors will come into play? Marinkovich said, “That’s when we will have some really robust discussions around the selection table, working out what shooters we’ve gone with, what kind of feeders do we need for them, what kind of movement they offer, along with some versatility.

“It’s not how much ball they are getting, it’s what they are doing with it. The Diamonds’ selectors are looking at midcourters that can feed on and off the circle edge, and an ability to change the pace.

“There are also factors that numbers don’t show, but our oversight and the way we want to play can reveal. Sometimes it’s the balls that the players don’t release or don’t overplay, or the opportunities they do or don’t miss when they are put under pressure.

“The ability to be direct is also important – the Diamonds want to keep the goals ticking over and apply that scoreboard pressure to the opposition.” 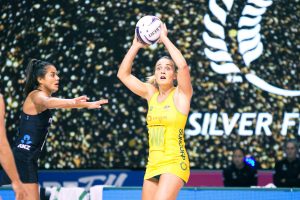 With just five defenders named so far, it’s the area of the squad that is most likely to grow, as the selectors look to potentially give themselves more options.

Marinkovich said, “Across the Suncorp Super Netball this year, competition has been attack dominant more than defence. We are looking at players that can get ball in hand, so it’s light at the moment. However, there are players on the fringe that we will be able to give a little more time and oversight to see what form they are in.” 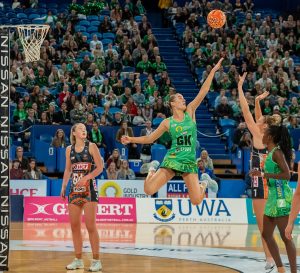 Courtney Bruce has had an exceptional start to the season. Image: Clinton Bradbury Photography