Finishing minor premiers for the first time since 2018, Giants had a bright start to the season with four consecutive wins, sitting pretty in first spot. However, those matches were against teams that each finished in the bottom half of the ladder, and it took until round 11 against Swifts before Giants finally beat a true contender. They didn’t manage to beat Sunshine Coast Lightning in 2021, but each of the top four are an equal threat.

Swifts had more of a yo-yo season. They had one win and one loss against the other finalist teams, but dropped games to the Magpies, who ranked 6th, and the 7th-placed Thunderbirds. There were a few obvious form slumps during the year which they may have fought through with two victories in the end of the regular rounds.

This was where GIANTS began to suffer repeated losses, as their heavy toll of attacking turnovers could not be compensated for by great form of Price, Parmenter and Brandley in gaining the ball. For most of 2021 GIANTS had three players in the top ten for turnovers, Harten, Dwyer, and Price.

Highlights were many for Swifts. Turner and Hadley isolated the GIANTS attackers and suffocated their patterns. Their transition was sizzling, especially through Proud, bolting through the middle channel. And the variation on centre passes resulted in a 76% conversion for Swifts, with Wallace shooting an incredible 58/58. Housby shot only 5/5 and GIANTS failed to double-team the Trinidad and Tobago shooter.

GIANTS played their best game of the year, for the first time beating a top four side. The key was Poolman pushing Wallace either very high to circle edge, or letting her take the baseline and holding her there. They also did well with only 19 turnovers, relied less on supershots, and boosted their season accuracy of 79% to 86%. The key in attack was short sharp passes, keeping Harten in the circle, reducing flair, and keeping Klau on the side hold to maximise Harten’s reach and stretch, which isn’t expected of a shorter shooter. Harten’s timing off the hold was a sight to enjoy.

The run into finals

In the final four rounds, Swifts beat Thunderbirds and Lightning, but lost to Magpies and GIANTS. Those two defeats provided them impetus to run up the ladder, and saw a spike in form from Housby in particular. The fascinating gambit from coach Akle was that Garbin was the surprise starter, and was dominant shooting against Thunderbirds in round 13, while Wallace smashed Phumza Maweni in round 14 with 50/52. Captain Maddy Proud also is running into hot form, and all of the squad are getting court time. It is a team thriving on passion to regain their 2019 title.

The last four games for GIANTS were tight. They faced the other finalists, beating Fever by two and Swifts by four, but lost to Lightning by one. Their best play is the short sharp attack, less risk, keeping Harten as a dominant shooter who lessens coming out of the circle. Hay and Dwyer are the more considered players leaving the experienced Price to punch forward at the right time. They also have reduced their penalties in defence, which does drop their gains somewhat, but overall is more effective.

Who has the upper hand?

At this point it seems like a coin toss for the major semi final. Form is good all over the court, and the sides have shared one victory each. There are two key areas benefitting the Swifts marginally.

Firstly, Swifts have legitimate options all over the court, whereas Giants have barely used changes in their midcourt. While experienced and a source of strength, Price has many turnovers, and Parmenter has significant numbers of contacts. In the pressure of finals, they might resort to bad habits. At best, they will pick their battles and dominate. Hay at wing attack has been super safe in 2020 and 2021, but she has weaknesses to exploit. Always playing safe, she lacks the natural dodge and reoffer of a feeder, often retreating to the pocket. From there, she has no shoulder pass or overhead pass, always using an unusual pass from behind her shoulder or a chest pass. Isolating her will show if she can truly do some long feeds or resets to the transverse.

Secondly, the Swifts have more recent finals experience and international games. Wallace, Housby, Haythornthwaite, Hadley, and Klau are test match capped. All of those players plus their other starters won a premiership in 2019. For Giants it’s a finals debut for Dwyer, Hay, and Parmenter. The lack of home court advantage means that this is a very open contest that will come down to little moments, short runs of play, and composure.

For GIANTS to secure a grand final berth, they need to concentrate on what works – reduced risk and flair in attack, assured transition from defence, and less cheap contacts. Some of their defenders like Poolman and Manu’a need to be more deceptive and focused on the jump to reach the hands of the shooter, rather than trying to unbalance them. Meanwhile Parmenter needs to mix up the zonal and one-on-one play, and move her line off the circle to use her long arms to deflect in the pocket. 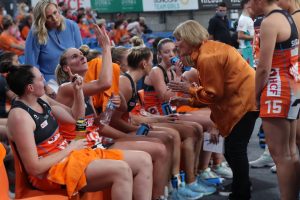 There are question marks over GIANTS leading into finals – will their two injured athletes play, and how will their youngsters perform? Image Danny Dalton 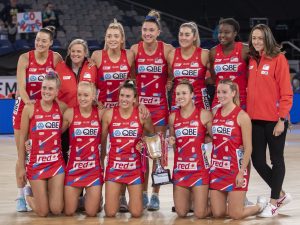 Swifts secured the Sargent McKinnis Cup for 2021, and will be keen to replicate their 2019 championship win. Image Kirsten Daley

Both are powerful clubs, able to field a starting seven of past grand final players, Lightning taking the advantage with two premierships from three attempts. Fever, suffering negative 12 points due to historical salary cap breaches, were a juggernaut to start 2021, smashing consecutive wins until Swifts worked them out by one goal in round nine. From then on, other teams borrowed that defensive style, such that Lightning and Giants also got narrow wins over West Coast, throwing the finals series wide open.

Lightning also didn’t have this year their own way. Whilst they weren’t beaten by Giants at all, those wins were only by one and six goals, and they had an untidy loss to last-placed Vixens in round nine. Critically, smart coaching and player discipline in later games showed they are adaptable and can challenge any opponent and any world-class player in the league.

Round 3 in Sunshine Coast

Early in the season Fever were very slow starters, and this was no exception, going down 12-21 in the first quarter. They proceeded to annihilate the Queenslanders 57-33 for the rest of the game. It was a repeat of recent showdowns, Maweni with no answer one-on-one to Fowler’s strength, and Bruce able to keep Koenen tied to the baseline and then come out to intercept balls to feeders. The injection of Glasgow in the second quarter kept Fever’s momentum going by adding accuracy, supershots, and allowing Charles to dominate her natural run-on feeding.

Lightning clearly had studied Fever’s plan A and plan B, and all their options. The win while close was built on the change in circle defence, where there was a closer double-teaming of Fowler from Maweni and Pretorius, who didn’t body up but were ready to attack a feed that looked open. The other highlight was Koenen spending plenty of time in the circle, finding Bruce’s body in front position. She mixed that up with smart sharp drives out in the middle channel, and also efficient drops to backspace. Lightning worked to hold back the Fever goal attack, whose strong direct drives set up Charles for the next pass and flowing feeding on the run, and it worked. Fever seemed to have a loss of energy and connection across the court.

The run into finals

Fever did as necessary to give them a finals spot, decimating Magpies, Vixens, and Firebirds, but suffered a narrow 73-75 loss in the final round to Giants. The losses in the middle of the season to Swifts and Lightning  gave them a scare, as did the strong improvements of Firebirds and Magpies. With 11 wins, more than any other team, but losses to each of the other finalists, there is nothing settled and sure, and they will need to make smart choices in starting seven and in substitutions. Having been benched more and more in the rounds, Alice Teague-Neeld seems to have brought back spark and confidence in goal attack and her play will be critical.

Lightning were riding high mid-season, and then tumbled with stunning losses, much as Giants had in rounds 5-7.  In round eleven Firebirds smacked them 59-49, and the next game the struggling Thunderbirds won 61-60. But it was hardest to swallow the capitulation to bottom ranked Vixens in round nine, when Melbourne rookie Samason single-handedly beat Sunshine Coast, who were at top spot, 55-52. They have at least pulled their form back against Giants in round 13, but they lost by five to Swifts in the final round game. There’s not much confidence to derive from their recent showings, but they are a true champion team who have the right balance of grit and poise.

Who has the upper hand?

Smart money here is on Fever, but it is by no means a done deal. West Coast have won four of the last five games between these clubs, and by at times truly massive margins. The recent loss by four to Sunshine Coast in round ten was due to uncharacteristic unforced turnovers by Fever, along with uncharacteristically poor gains, and some smart new tactics from the Queenslanders in defence and goals. Expect Fever defence to adjust in these intervening rounds and Bruce to be more on par with Koenen, whilst their attack will start using more width and different angles to keep the Lightning defence heads spinning.

For Sunshine Coast it is vital that they remain creative, sharp, and organised on their first and second plays off the centre pass. Amongst other areas, their recent victory was built on a better centre pass conversion, 77-70%, which essentially mirrored the round three result there. It’s also down to the coaching of the midcourt and shooting changes – switching of Cassidy and McAuliffe between wing defence and centre does bear fruit but the timing is vital. And keeping all of Koenen, Wood, and Proscovia alert and adaptive can win the game.

The fundamental change of fortune was borne out in turnovers. Round three Fever were better with 16-22, and Lightning reversed that with only 17 to 22 of West Coasts. The key difference was the doubt in the feed – in the first fixture, Bruce covered Koenen and balls sailed over the baseline. But in the second, Koenen didn’t move as much, so the feeders had front balls to execute. Also in the second, Pretorius and Maweni came off and attacked the receipt of the ball of Fowler. The feeds were delayed, uncertain, and short, and they caused fumbles and off balance takes. Both teams will keep that front of mind to advance to the preliminary final. 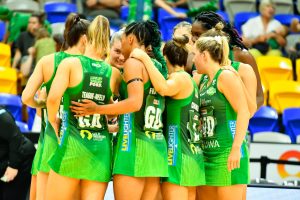 Fever have won more games than any other teams, but stumbled at a few critical points. Image Simon Leonard 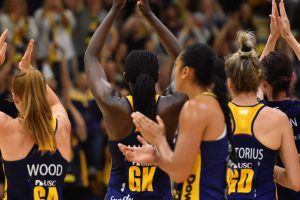