It’s that time of year again. The 2019 Suncorp Super Netball season is nearing completion so, fans are now eagerly awaiting to see what is happening with their favourite players and teams ahead of the 2020 season. With a raft of injuries during the 2019 season and various retirement announcements already made, there is much to talk and speculate about.

The official window for teams to re-sign current players closes on 16 September. After that, opposition teams can approach any out-of-contract player. All teams must have their 2020 rosters finalised by 14 October 2019.

In Part One we looked at the Adelaide Thunderbirds, Giants Netball, Magpies Netball and Melbourne Vixens. In part two we will be looking at the remaining team as we know them so far, based on the already released Suncorp Super Netball list of uncontracted players and our research. **It is worth noting that some teams or athletes may elect to not option the additional years of their contracts.

Maddy Proud (out for start of 2020 season with ACL injury. May play in the second half of the season)

In only her second year as head coach, Briony Akle, managed to lift the New South Wales Swifts from sixth (in 2018) to the grand final this year. Add to this the club’s reputation of sisterhood and comradery, and it was almost expected that the core group would remain with the Swifts in 2020. Now, they are only waiting on one signature – Kate Eddy’s – and they would have their perfect 10.

But with Eddy and captain, Maddy Proud, on the injured list the Swifts may need to do some recruiting.

Will Kate Eddy recommit to the Swifts? Image: May Bailey.

If Eddy doesn’t sign, the Swifts will be another team on the hunt for a defender. It has been Akle’s m.o. this year to swing her wing defence into goal defence as she did many times with Eddy and then with Katrina Rore in the later stages of the season. Unfortunately, with Rore committed to the Central Pulse (ANZ Premiership) she isn’t a viable option for the Swifts next year.

One option for the Swifts could be former Silver Fern, Kayla Cullen who has reportedly relocated to Sydney. Cullen did take the court for the Swifts as a temporary replacement player this year.

Another, albeit temporary, void which needs plugging for the Swifts is that of Proud’s bib. The feisty wing attack is likely to be out for the first half of the season as she recovers from her ACL injury. Training partners, Sophie Halpin and Tayla Fraser have stepped into Proud’s role quite effectively this year. It will be a hard choice for Akle however, Halpin may get the nod based on her experience.

The Queensland Firebirds will have something to prove in 2020 after their horror 2019 season. But, despite recording only one win this season, they do take some positives into next year, starting with those that are already locked in.

The Firebirds quickly identified that their front end was not the problem and subsequently locked that down. Gretel Tippett had her best season to date and was the most accurate shooter in the league finishing on 96%. Her combination with fellow goaler, Romelda Aiken looked to be as strong as ever, and may have gotten the Firebirds over the line in a few of the tighter games had Aiken not been sidelined with injury for four games. Expect to see that combination continue the same trajectory in 2020.

Penalties really hurt the Firebirds this season. They topped the table with over 1,000 penalties: 112 more than the next closest team. That is a relatively easy error to correct and several times this season they proved that when their defence is controlled, the Firebirds are a competitive side.

Tara Hinchliffe and Kim Jenner are back for the Firebirds in 2020. Image: Kirsten Daley

However, the Firebirds current defenders, Kim Jenner and Tara Hinchliffe, are only young and would benefit from the on-court guidance of a more experienced head. There are currently two, skilled, unsigned goalkeepers in Australia at the moment which could be the Firebirds radar. If one of them is heading north, it would create competition for starting defensive positions, which would only bolster the side’s defensive firepower.

At present, the Firebirds have only confirmed one mid-court position in their captain, Gabi Simpson. She is the player who buoys the team when games get tough and is also a calming influence for her more spirited team members. What worked well for the Firebirds this year was the balancing act that Simpson had with retiree, Caitlyn Nevins. They will be hoping to recruit any equally talented athlete to fill that position, one who can place the perfect aerial pass and read Tippett’s plays. For a few games this season, coach Rose Jecnke’s daughter, Macy Gardner, did take the court at wing attack. The ANL athlete and Firebirds training partner did impress in her limited court time so, is a reasonable option.

The Firebirds will also need to recruit a temporary replacement for their injured centre, Mahalia Cassidy. Jemma Mi Mi shared the role with Erin Burger for the later part of the season and did a solid job. They will be hoping she recommits for season 2020 as she got better and better with every outing. The Firebirds could then, possibly, get away with elevating a training partner to warm the seat until Cassidy is game ready.

The Firebirds will be announcing two more signings early next week. 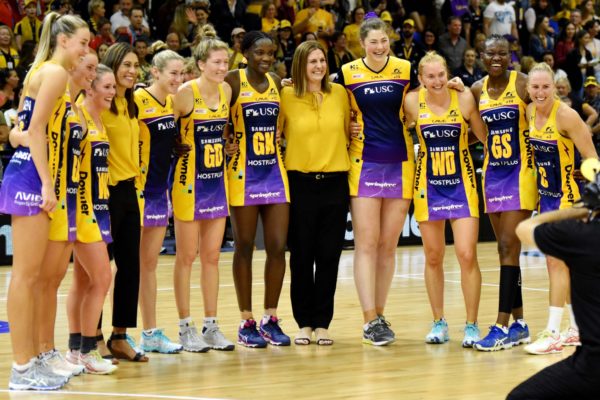 The signs are looking positive for the Sunshine Coast Lightning who, so far, have retained their bookends and two of their midcourt stars.

It is hard to pinpoint exactly where the Lightning need to improve. They were the least penalised side in the league this year and lead the competition for intercepts (135) and rebounds (101). Having re-signed their dynamic duo of Karla Pretorius and Phumza Maweni, we would expect them to continue to produce outstanding defensive pressure again next season.

The Lightning’s shooting accuracy was a respectable 87% this season, marking them as one of the most accurate in the league. Peace Proscovia has now had a season to adjust to the speed and style of the competition and a year to build her connections with fellows Steph Wood and Cara Koenan, so she will only grow in confidence. Koenan has had an outstanding season 2019, and her moving style of shooter brings another edge to the Lightning’s already potent attacking unit.

Will Laura Langman be back next year for the Lightning? Image: Simon Leonard.

If (and this is a big ‘if’) the remaining duo of Laura Langman and Jacqui Russell do not return to the Lightning next year, will they be in trouble? True; the Lightning would lose some of their strong mid-court defensive pressure and their penetrating speed. But their front line would still be anchored by Laura Scherian who outscored her other midcourt teammates in goals assists this season. So, they would still have that front-end drive.

Finding a replacement the calibre of Langman would be difficult as most of the specialist centres in the league are already committed. The Lighting managed to perform well last year without Langman, so they may not look too far afield than their training partner pool which has two great midcourt options in Ashlee Unie and Chanel Dyer who have had outstanding ANL seasons this year.

One of the keys to the Lightning’s success has been their culture. Their players are happy and active in maintaining that culture. Their coaching staff make the unit accountable for their own work rate and performance which is something that is not likely to diminish when their head coach, Noeline Taurua, passes the torch to Kylee Byrne. These reasons add weight to the argument that they will sign from within their pool. And, if they can keep their culture on pointe next year they will likely be playing finals netball again.

The West Coast Fever will tackle season 2020 with an unchanged lineup. If they are hoping to reach the playoffs again, they will need to improve in two major areas of the court.

The most obvious area for improvement is in their shooting circle. Of the 821 goals the Fever scored this year, Jhaniele Fowler scored 709 of them. During the off-season Kaylia Stanton and Alice Teague-Neeld will need to do some serious work to take the pressure off the Jamaican. That work must come in both load and accuracy as the duo shot at a measly 66% (combined) this season.

Will Alice Teague-Neeld play a bigger role for the Fever in 2020? Image : Simon Leonard

The argument that keeps being given is that their role was to feed Fowler and put the occasional shot up, but for a third season in a row, that tactic will not work (and was not working this season). Defenders have gotten more agile and mid-courts have wised up on how to apply pressure to the feeders. The Fever will need to change their attacking style if they hope to play finals netball.

For the fourth year in a row, Fever will have the same defensive line up in Courtney Bruce, Stacey Francis, Shannon Eagland and Jess Anstiss. The unit was tweaked a little this year with the introduction of youngster Olivia Lewis who has also signed on for her second year with the side.

This seemingly solid backline was among the cleanest of 2019 in terms of penalties. However, they were the second lowest ranked team for intercepts, the third lowest for rebounds and absolute lowest for deflections. Admittedly they were without Bruce for five games but, in a lineup of this calibre, who know each other well, they should have produced in her absence. This is an area which will need to be rectified before next season.