It’s that time of year again. The 2019 Suncorp Super Netball season is nearing completion so, fans are now eagerly awaiting to see what is happening with their favourite players and teams ahead of the 2020 season. With a raft of injuries during the 2019 season and various retirement announcements already made, there is much to talk and speculate about.

The official window for teams to re-sign current players closes on 16 September. After that, opposition teams can approach any out-of-contract player. All teams must have their 2020 rosters finalised by 14 October 2019.

Here are the lists for the Adelaide Thunderbirds, Giants Netball, Magpies Netball and Melbourne Vixens as we know them so far, based on the already released Suncorp Super Netball list of uncontracted players and our research. **It is worth noting that some teams or athletes may elect to not option the additional years of their contracts. 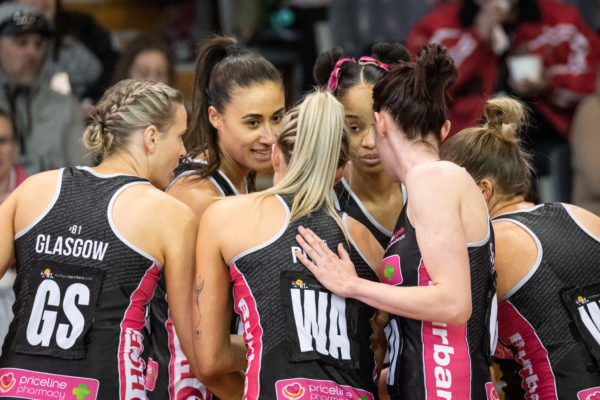 Layla Guscoth (out for most of 2020 season with Achilles injury)

Sasha Glasgow (out for most of 2020 season with ACL injury)

When the Adelaide Thunderbird’ co-captain, Layla Guscoth, went down with a ruptured Achilles at the World Cup, it was the second of three major injuries for the side. Fellow English import, Beth Cobden, was the first in Round 3 (ACL), and Sasha Glasgow was the last in Round 13 (ACL). These injuries meant that the Thunderbirds were unable to hone their connections this season. And, for a team who, largely, hadn’t met each other ahead of preseason training, and were attempting to gel different styles, that’s disastrous.

Moving into season 2020, the Thunderbirds will have to rebuild – again. If they can keep Shadine Van Der Merwe and reintroduce Cobden (who should be nearly recovered by the start of the season) they will have a formidable backline, after they cleverly signed Shamera Sterling for multiple years at the start of 2019. Until Cobden can take the court, youngster Maisie Nankivell can more than cover her position – if she isn’t picked up by another team. 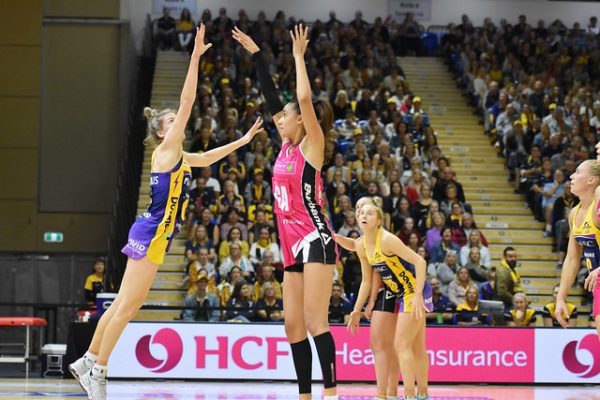 Maria Folau will be a key signature for the Thunderbirds. Image: Marcela Massey

The Thunderbirds will desperately hope to re-sign Maria Folau who they can build an attack end around. With Cody Lange and Hannah Petty already signed and if Chelsea Pitman recommits, the Thunderbirds will have that stability they need in the front end and through the midcourt.

However, there is a possibility that Lange’s contract may not be optioned, based on coaching decisions to leave her out of the game day 10 on several occasions this season. If this happens it would leave the door open for an athlete like Charlee Hodges to take her spot. The benefit of having Hodges in the side is her court smarts and her accuracy on the feed. Hodges spent season 2019 with the Northern Stars in the ANZ Premiership so is also familiar with the New Zealand style of play.

There has also been an enormous amount of speculation that South African goal shooter, Lenize Potgieter has already committed to a contract with the Thunderbirds. This speculation began before Glasgow was injured which begged the question of where would Potgieter fit into the line-up if they had Folau as well? Now, that is a moot point in light of Glasgow’s injury.

Following a conversation with Potgieter at the World Cup in July, we can confirm that at that time she had not committed to any team and was ‘weighing up her options’. What she has done since then … we will have to wait and see. If she doesn’t sign with the Thunderbirds, it is likely that Emma Ryde will be given the spot given her confident play as a fill-in this season. 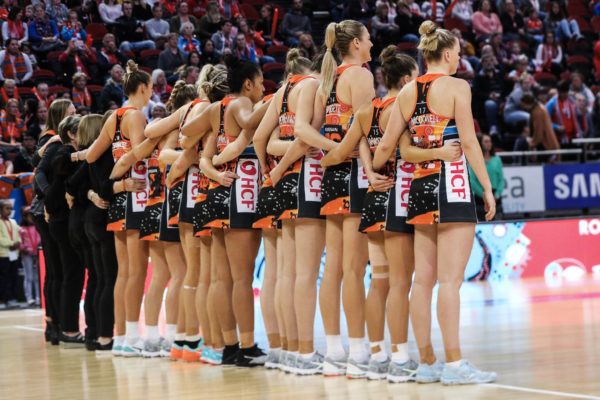 Giants Netball had an up-and-down season 2019 – notching seven wins, six losses and one draw. Round 3 saw them get their first win but from there, they were still unable to string more than two wins together.

One of the major areas where the Giants could improve in 2020 is their conversion rate. Collectively the Giants secured 96 intercepts, 97 rebounds and 259 deflections during the regular season. They were amongst the top-rated teams for those stats, yet also had a staggering 291 turnovers for the season.

Unfortunately for the Giants, most of their turnovers came out of the hands of the already signed ball carriers of the team in Jamie-Lee Price and Jo Harten. Given Price’s transition from wing defence to centre, it is not surprising that she has had trouble in placing accurate feeds to her shooters, especially given Bassett missed a lot of pre-season training due to her injured wrist. Regardless, Giants will be hoping that Price and Harten can find some stability, and maybe reign in their flare for the safety of ball placement. 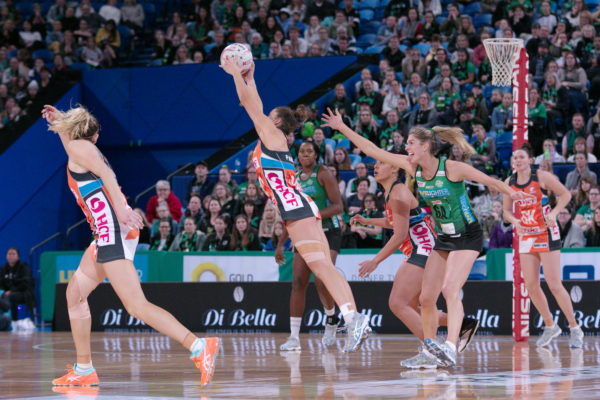 Amy Parmenter will no doubt be fielding many offers from teams in 2020. Image: Steve McLeod

The fact that Giants have yet to secure a signature from Amy Parmenter is not surprising. In her debut year, ‘Parmy’ has been rock solid taking almost a third of the team’s intercepts and deflections. She can be costly in terms of penalties however is showing great promise and will no doubt be receiving multiple offers from teams with a defensive gap to fill. We do expect her to stay with the Giants (for now) given her friendship circle is there, and her loyalty to coach Julie Fitzgerald.

Kristiana Manu’a and Sam Poolman have really flourished as a duo this year and we expect them to continue that into next year. There are not many teams with gaps where either of these athletes would fit, though Magpies Netball may be in the mix for Manu’a. 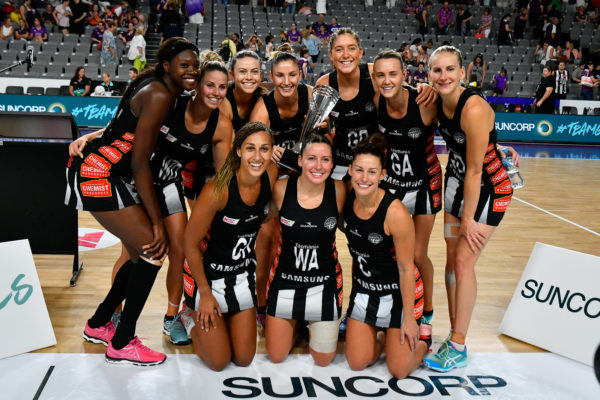 Magpies Netball are yet to show their true potential. 2019 mirrored their debut year in that they finished fourth, however they did so with less wins.

A positive for the Magpies is their shooting end which was reliable and once they worked out their midcourt, they had a surge in confidence wins, albeit at the backend of the season.

In 2020, the Magpies will need to do slight tinkering with their midcourt due to Kelsey Browne’s ACL injury. They have named Tasmanian Magpies ANL athlete, Molly Jovic, as her ‘temporary’ replacement player, as they optimistically hope that Kelsey will be back before the end of the season.

However, the more likely on-court replacement for Kelsey will be her sister, Madi who is also off on ACL recovery at the moment. Madi will likely return to full fitness before the start of the 2020 season and having already had a full pre-season under her belt with the side she is the logical starting choice. But, to date, she hasn’t signed on for 2020, so it is still up in the air. 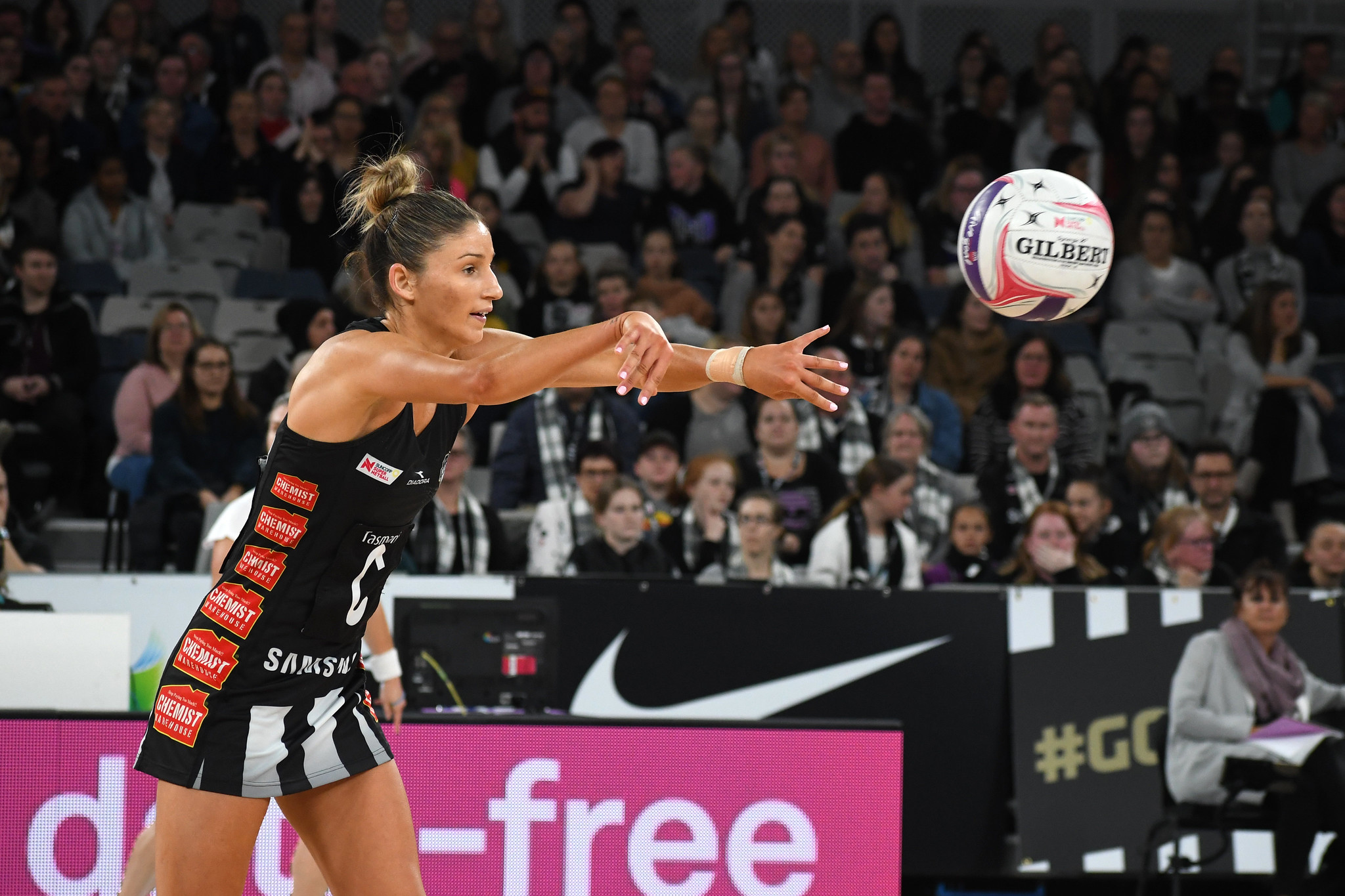 Will Kim Ravaillion re-sign with the Magpies for season 2020? Image: Aliesha Vicars

Kim Ravaillion may be the other option to wear the WA bib however, she is also yet to recommit. Ravaillion is one of the few Super Netball players who can swing comfortably through any midcourt position, so the Magpies will be hoping she recommits to give their midcourt the much-needed diversity.

There is also one more spot in the Magpies mid-court up for grabs in season 2020. The obvious choice would be Melissa Bragg given she has already played a few games for the side. However, Bragg is more a defence specialist than attack, and that is where the hole is. Rob Wright may look to elevate Kelsie Rainbow from a training partner yet is more likely to search for a bigger name.

Heading into 2020 the most glaring gap to fill for the Pies is their goal defence position with April Brandley going on maternity leave. Expect to see Matilda Garrett get more court time in Brandley’s absence. 2020 will be her third year with the Magpies and after all of Brandley’s tutelage, Garrett will shine.

The third defence position is anyone’s guess. If the Magpies are looking internationally, perhaps a good candidate could be young English athlete Fran Williams. She was a great stand-in for Layla Guscoth at the Netball World Cup and already has a connection with Geva Mentor. Williams played with Wasps Netball in the Vitality Super League in 2019 and is yet to confirm where she will be playing in 2020. 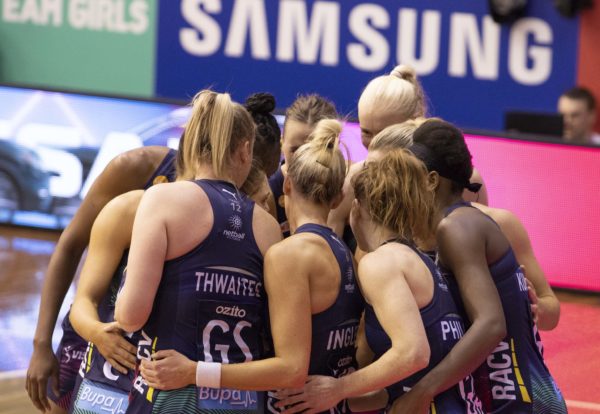 Not surprisingly the Melbourne Vixens have held onto four of their big guns ahead of season 2020. Emily Mannix, Jo Weston, Kate Moloney and Liz Watson are the heart and soul of the Vixens line up. The four Diamond squad members are reliable and know each other’s games well. They have great leadership and experience for the team to build around.

It is surprising that, to date, no shooter has put their pen to paper for the Vixens. With Mwai Kumwenda coming back into the side in the latter stages of the season, and experience like Caitlin Thwaites and Tegan Philip vying for starting bibs it must make decisions hard for coach, Simone McKinnis.

All three shooters are in their 30s with Phillip and Thwaites likely to call time on their careers in the coming years. Is now the time for McKinnis to introduce fresh blood into the front end? If she does, who would she let go? She did trial, South African, Ine-Mari Venter for a few games this season until an injury kept her sidelined. Will she renew Venter’s contract or look to blood emerging talent like Rahni Samason who has had a solid two years of ANL and has been a Vixens training partner this year? 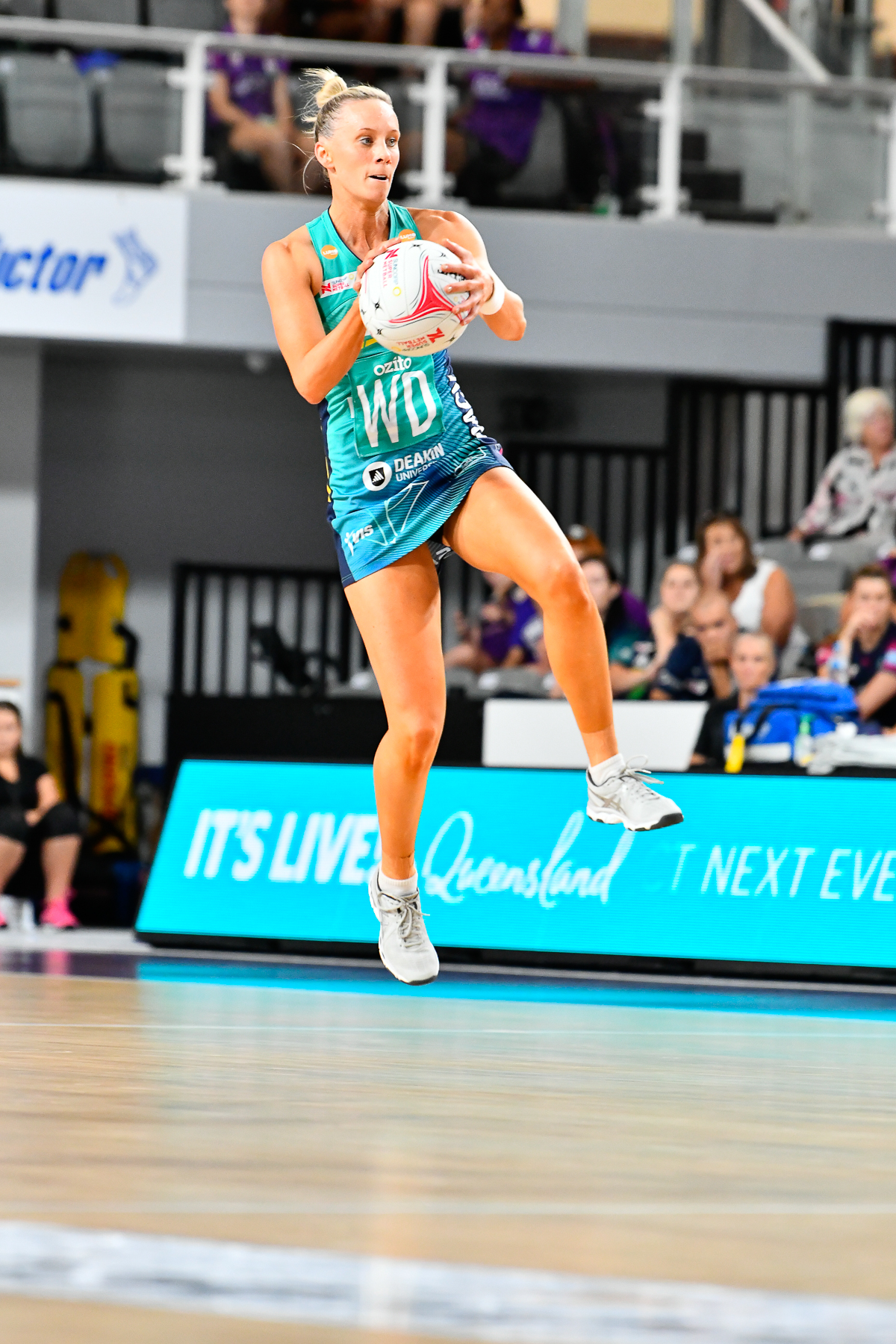 Who will replace Renae Ingles at the Vixens? Image: Simon Leonard

A gaping hole to be filled in the Vixens line is that of wing defence, now that Renae Ingles has retired. Lara Dunkley, who was a late callup for injured, Tayla Honey, is likely to retain her spot on the side, having proven she is ready in the few games she took to the court. That leaves question marks over Honey. Will the Vixens look for another experienced athlete to complete their midcourt or entrust the position to the two rookies?

Another big question mark hangs over Kadie-Ann Dehaney. The talented Jamaican has been trading places with Emily Mannix for a couple of years and, this year, took the court more than ever, netting intercepts, deflections and rebounds in each outing (and only one turnover for the whole season!). Will she be satisfied to go another year with the same to-and-fro pattern, or will she go hunting for more court time? There is a possible place for her at the Queensland Firebirds who are in need of a solid goalkeeper and with fellow Jamaican, Romelda Aiken on the team, she could be comfortable in Queensland.