NS EXCLUSIVE: Tegan Philip reflects on her passion for netball

NS EXCLUSIVE: Tegan Philip reflects on her passion for netball

If the best games of netball look like dancing with a ball, Tegan Philip plays goal attack like she’s in an elaborate Regency gavotte. Now that you know she is retiring, watch again her most recent MVP performance against the Fever in Round 5. She presents for the ball at the centre pass, then withdraws smoothly to circle the periphery, reappearing in an unanticipated space to dissolve a defensive goal circle tangle just when the music demands.

The changes of direction are constant, smooth and precise. There are no sudden dashes, just mesmerising motion delivered with twinkling footwork; every movement anticipating a balancing parry from a teammate. This is an art that defies a superficial tally of Netpoints. She had four opponents at GD in this game: two international players and all the strategies of the new Diamonds coach could not shut her down. 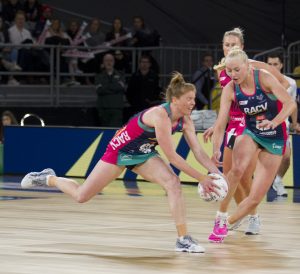 Philip entered big time netball at the mature age of 20, when she made her first Victorian team with the Under 21s in 2008, and it wasn’t until she made her first Australian Under 21 team in 2009 that she thought, “Oh, you know, I’m alright at this. Maybe I could give it a crack. My realisation that I might be good at this came a bit late.”

Her youth was not dominated by rep teams or stints at the netball academy. “I was just playing netball because I loved it, mainly.” She wasn’t spotted as a future netball star until 2006, her final year of school.

“Nicole Richardson, who was with Netball Victoria at the time, saw me playing in this school competition and approached me to trial for the Victorian state team. I didn’t actually start trialling for those teams before I got that opportunity, when I was just out there having a run with my friends and enjoying the sport that I loved.”

Philip’s sporting pedigree doesn’t include any other elite athletes amongst her forebears; just a strong community-based commitment to teams and exercise in her home town of Anglesea. “I played all sports. I played netball in the winter and tennis in the summer in Anglesea. At school I played everything, but my passion’s always been netball,” she says.

What she loved about the game was the team aspect. “Playing with your friends, running up and down the court, enjoying it and keeping fit and healthy. I have just always rolled with it and grown my passion for it.” 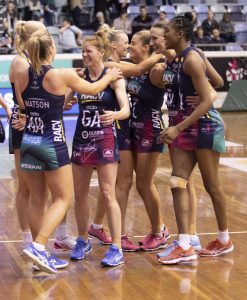 Being part of the team was what Tegan Phillip loved most about netball.  2019 Image Kirsten Daley

Key figures in Philip’s development as an elite player were Marg Lind and Nicole Richardson, when she started playing with the Geelong Falcons in 2007. “That was probably the turning point in my netball journey, playing with the Falcons and winning a few premierships with the VNL. They saw my potential, that I was athletic, that I was dynamic with my short, sharp movements and speed.

“From them I learned to be smarter in my movement, when to use my speed and when to not use my speed. Also, the defensive side of things: it’s important to be able to defend when you’re an attacker as well. They tweaked my shot a little bit, but mostly it was building on the base that I had, which was quite raw at the time!”

When she was offered a contract to join the Vixens in 2010, she had few connections with any of the other team members, and had to start building relationships. “I only knew the girls from the Victorian Under 21 team, so when I joined the Vixens there was only Ash Howard. I was meeting everyone knew, and they probably didn’t know me either, so I was pretty much starting from scratch.” 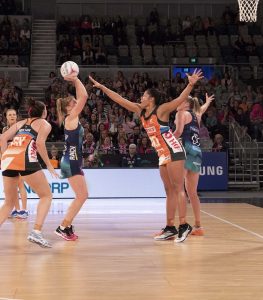 Tegan Philip always willing to shoot from anywhere, this time in a 2019 SSN match against the Giants. Image: Kirsten Daley

Her biggest fans have been her mother and her father. “I wouldn’t have been able to do what I have done without them,” she says. “Living in Anglesea, there’s been a lot of driving over the years that they have committed to, so I’ve been super grateful for their support. They have 100% supported the sacrifices I’ve had to make along the way. I’ve missed birthdays and celebrations. The commitment is huge, but if you want to do well you have to commit to it, and they have supported me through that process.”

While the sacrifices to play at the elite level have been significant, there was never any hesitation that she wanted to do it. “I didn’t have a lot of time to doubt, it all happened quite quickly. In those couple of years from 2008, I just took my opportunities when they arrived, and a few of them came because of injuries to other players. If I wasn’t prepared or hadn’t done the hard work before those injuries occurred then I could have easily lost those opportunities.”

Philip’s philosophy as a player is, “Go out and give things a crack. Go out and have confidence in your ability and believe in yourself. You just have to work hard. That’s my mentality on court, but there’s also the care and support you need to provide your team mates as well. I have tried to put my time into that as well.”

Ask Philip who she has found to be her most stimulating opponent, and she reflects on the vast array of international players she has been able to play against regularly through the Super Netball competition. “I was lucky enough to have some of the best defenders actually in my team, like Julie Corletto and Bianca Chatfield. Training was very similar to what would happen on game day, which made me a better player as an attacker.”

But who did she like most to outwit? “I most enjoyed getting the better of Bianca Chatfield!” she laughs. Then on more serious reflection, she says, “I always love the challenge with Karla Pretorius over the last few years. It’s certainly a battle, but one that I enjoy because she’s such a great player, and she reads the play really well so I know that my job is to keep her busy so I really enjoy that challenge up against her.”

In her eleven seasons playing in Australia’s elite domestic competition, Philip only ever pulled on the Melbourne dress, becoming the Vixens’ most capped player with 131 games. “I had no real desire to go elsewhere than the Vixens. Being a Victorian girl and being close to home was the ultimate for me. I have really enjoyed it. It’s not that I didn’t consider other options along the way, but I felt that my place is here with the Vixens and it’s where I wanted to stay. I’m proud to be able to say I have played my whole career at the one club.”

Philip’s most memorable year as an elite player was in 2014 when the Vixens won the premiership and Philip was named Player of the Match. In typically modest style she says, “That was pretty special with that group of girls. And then, being named for the first time in the Australian team and debuting at the Commonwealth Games and receiving that Commonwealth Games gold medal was the biggest highlight in my career. I can still remember moments from those experiences today.” 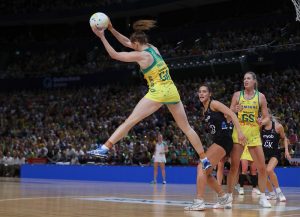 Tegan Philip showing her elevation in the 2019 Constellation Cup. Image: May Bailey 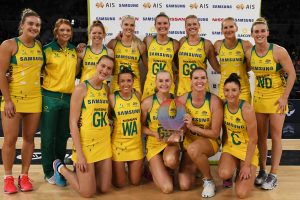 She has seen profound changes in her time playing at the elite level in Australia. One of the most significant advances was the financial security provided by decent player salaries. “Earning a living from playing has made things a lot easier. I have not had to seek employment elsewhere to support myself financially. I play the sport for the love of it, but it’s nice to receive what the elite netballers deserve at our level.”

If Philip woke up tomorrow to find she was the Queen of Netball, there is not much she would change about the sport, although she remains unconvinced about the two point shot. “I’m a goaler too!” she says, laughing. The Vixens won the minor premiership convincingly, and were third on the Supershot table, behind the Giants and the Swifts.

Philip is dubious about the value of this season’s major rule change. “I just love the fundamentals of the game – I love the sport as it is. I’m not opposed to changes or trying to make things more entertaining. I just love the tradition of the game and sticking to its history.”

She thinks the two point shot has been significant in changing the outcome of games. “We were able to get back into games because we nailed those two point shots. Whether it’s had the impact they intended this year, I’m not sure. Some people like the two point shot, others hate it.” 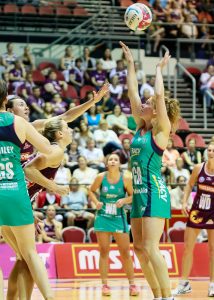 Tegan Philip in a 2015 ANZ Champs game against the Firebirds. Image: Simon Leonard.

Philip is about to finish her Bachelor of Education, and she’s planning to be a secondary teacher next year, specialising in Health and Physical Education and Mathematics. She has completed placements around Geelong, with one placement to go, and she submitted her last assignment a week ago. Her students always recognise the celebrity athlete in their midst – “There’s a lot of snickering!” she says.

She always ends up giving some of them a netball talk, and would love to continue her wellbeing work with Netball Victoria next year. She is also in the middle of building a house with her husband, which will be ready in a month. “It has been a challenge from up here,” she says. “I’m looking forward to moving in and settling in to our next adventure.”

It’s hard to avoid feeling nostalgic about great players never playing the game again, but Philip may well be spotted in a bib again in the future. “They’re already trying to get me into Tuesday mixed indoor netball in Geelong. Saturday morning in Geelong on the outside courts – I’m not sure about that! But who knows?” 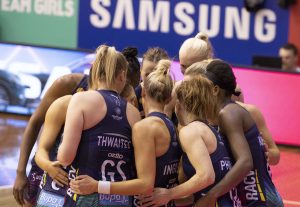 About the Author: Jane Edwards

I have over-indulged in playing, supporting, umpiring and coaching excessive amounts of sport, and there's still nothing better than a good game of netball.