NS EXCLUSIVE: Ten-four (Ten things we learned about the top four teams at the Commonwealth Games)

NS EXCLUSIVE: Ten-four (Ten things we learned about the top four teams at the Commonwealth Games)

There’s a feast of international matches between the world’s top four netball nations – Australia, New Zealand, Jamaica and England – coming our way over the next two months. Plenty of stars will be out on court, and there will also be a plethora of chess moves as coaches look to unearth new talent and cement combinations after the lean years of Covid. And with the 2023 Netball World Cup rapidly approaching, it’s time to cast our eyes back to what we learned about these four teams at the Commonwealth Games.

Every tournament has their unsung heroes: they aren’t necessarily the biggest stars in town, but they deliver when it matters. Two of the best from the Commonwealth Games were Australia’s Kate Moloney and Cara Koenen.

With midcourter Paige Hadley largely unavailable, Moloney found herself playing more minutes at centre than most of us expected. She looked as fresh at the end of seven games as she did at the start, and was ever reliable, balancing the court in attack and working hard in defence. Playing across all seven matches, Moloney put 139 feeds into the circle, and finished with 19 pick ups.

Koenen’s impact in the gold medal match was immense. Subbed on in the second quarter, she only shot 15/15 in 39 minutes. However, her movement opened up the goal circle and kept star Jamaican defender Shamera Sterling so busy chasing that she only came up with three gains, down from her tournament average of seven per match. Koenen also took an intercept and two pick-ups.

Playing in their first pinnacle event, Grace Nweke, Eleanor Cardwell and Kate Heffernen were hugely influential for their respective countries. In previous outings, Nweke has looked shaky under pressure, but in the bronze medal match she owned her starting bib. The young goal shooter put up 44/48, pulled in three crucial rebounds and had just one turnover. With her height and athleticism, the Silver Fern is going to be a rock in attack for years to come.

Similarly, Cardwell was the best-performed of the English shooters, putting up 207 goals across the tournament at 92% accuracy. With her ability to play both shooting positions, and strength under the post, Cardwell is now a foundation around which the Roses’ attacking end could be built.

Playing at wing defence and centre, Heffernen finished the tournament with 9 intercepts and 7 pick ups, and provided grit in the midcourt. However, as the second most penalised Silver Fern, she has work to do in tidying up her footwork.

There’s always a risk involved in taking an injured player into a lengthy tournament and for Australia it didn’t pay off. Paige Hadley, who’d injured her calf in training camp, only managed a few minutes on court before completely breaking down in the third match. It was a tough blow to the Diamonds, leaving them undermanned in the midcourt and limiting their rotations. Liz Watson, Ash Brazill and Moloney had to play extra minutes, although Stacey Marinkovich cannily swung both Kiera Austin and Steph Wood into wing attack at times, to rest legs when needed.

England had similar woes, with Beth Cobden omitted just before the tournament, and Jo Harten looking proppy throughout the entire event due to a knee injury. That didn’t help when both Helen Housby and Eleanor Cardwell were injured in the bronze medal match.

With Suncorp Super Netball allowing a more robust style of play compared to other domestic leagues, there was some concern about how Australian athletes would cope with the officiating, and whether they’d potentially be whistled out of the match. And while they did lead the top four team’s penalty charts, it was surprising to see that both New Zealand and England were close behind. The Silver Ferns have work to do tidying up their obstruction count – a relatively easy fix – while the Roses were the chief offenders for contact.

Jamaica was the cleanest team by quite some margin – something which assistant coach Rob Wright had been focused on.

Balance is the key to a good midcourt – defensive pressure is needed before the ball reaches a deadly accurate shooter, while in attack, quick-fire, precision feeding is needed. In selecting just one attacking midcourter, and three defensive ones, did England get their balance right?

With captain Nat Metcalf the only true attacking midcourter, she played a lot of minutes, with few viable options when she was either tired or closely marked. Unfortunately, with centre/wing defence Laura Malcolm trialled extensively at wing attack in previous series, it limited the amount of court time for wing attack option Sophie Drakeford-Lewis to gain experience and confidence. It’s an area of concern that the Roses will need to address.

In contrast, Australia made good use of shooters Steph Wood and Kiera Austin in that role, when wing attack Liz Watson needed a break. 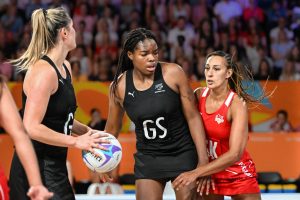 Grace Nweke (New Zealand) performed strongly in the bronze medal match, while Geva Mentor (England) had the fourth highest number of gains across the Commonwealth Games. Image Sue Mckay/Kick It To Me Photography

Jhaniele Fowler continued to stamp her dominance in the netball world, shooting a tournament-high 273 goals at 97% accuracy. While pickings were slim for opposition defenders, they did take advantage of the few balls lofted in from the central corridor that fell slightly short. Fowler is best fed from an angle, where the ball can be lifted higher, and there is space clearly available behind her.

With such dominant shooters, mistakes can effectively cause a two goal turn around, and so eliminating errors, along with creating turnovers, are critical to a team’s success. Ball handling has been a focus for New Zealand under Dame Noeline Taurua’s coaching realm, while in the past Jamaica have been guilty of gifting too much away – often 30 or more turnovers per match.

The trend continued for the Silver Ferns at the Commonwealth Games, giving up just 39 errors across seven matches (average 5.57/match). England were also good with ball in hand, with just 48 turnovers (6.85/match).

The surprise packet was Australia, higher at 61 errors (8.71/match), while Jamaica trailed the pack, although their tally was still respectably low with 80 across seven matches (11.42/match). While all numbers are impressive, there’s still work to be done by the gold and silver medal winning nations over the next 12 months.

With key defenders Karin Burger (foot injury), Jane Watson and Katrina Rore (both maternity leave) all out of the team, New Zealand’s defensive stocks were limited. It showed in their ability to generate defensive pressure, trailing the other three nations for Gains and Pick Ups by a substantial margin, and these should both be areas of focus leading into the World Cup.

With one of the strongest defensive ends ever seen, Jamaica unsurprisingly led the ladder for Gains. However, it was only by the barest of margins over Australia, who were the clear winners for Pick Ups. England would have been pleased with their Pick Up count, but have some work to do in generating intercepts.

With many pundits tipping Jamaica to finish out of the medals and consequently surprised by their performance, the short answer is yes, they were underestimated.

For those who correctly predicted a top two finish, it’s hard to go past the best goal shooter, and best defensive end, in the world. Combine that with defenders who can help carry the ball into attack, and numerous athletes who now have experience across domestic overseas, the Sunshine Girls have strength across all areas of the court.

On the negative side of the ledger is a population just half the size of New Zealand which restricts numbers, along with limited funding and facilities to support their athletes. As assistant coach Rob Wright stated in post match interviews, the Sunshine Girls don’t have a performance analyst, while there was just one physiotherapist and one soft-tissue therapist for the entire Jamaican athlete collective attending the Commonwealth Games.

On the back of their success, a three-year sponsorship deal with Wray & Nephew was announced for $14m Jamaican dollars (about $140,000 AUD) which should help Jamaica to build ahead of the 2023 Netball World Cup.

Where to from here?

While there’s plenty of netball to be played before the 2023 Netball World Cup selections, it’s time to look into our crystal ball.

After a disappointing fourth place, there will be both soul searching and potentially some fallout from the Roses’ campaign. With Stacey Francis-Bayman and Eboni Usoro-Brown retiring, a defensive end rebuild will be required, while more attacking midcourt depth is badly needed. Many will be hoping to see rising star Funmi Fadoju make her much anticipated debut. The Roses have plenty to do in a short space of time, if they are to challenge for Gold in Cape Town.

New Zealand should only get stronger, with the return of Ameliaranne Ekenasio, Karin Burger, Jane Watson and potentially Katrina Rore. However, it looks likely that Bailey Mes’ days in the black dress are over, as she shot just 13/23 (57%) across four matches. With Gina Crampton (sabbatical) and Shannon Saunders (maternity leave) temporarily out of the picture, depth will be added to the Silver Fern’s midcourt, while fans will be keen to see 187cm Elle Temu debut, adding much needed height to the defence end.

Jamaica have the retirement of Shadian Hemmings to consider, but other than that most of their athletes are in the prime of their careers and hungry for gold. Six of their team continue to ply their trade in Australia, Connie Francis has recently confirmed she will coach the Sunshine Girls through to the World Cup, and it’s to be hoped that assistant Rob Wright will continue to add his expertise. The upcoming series against New Zealand should add depth as Jamaica potentially rest some of their stars.

Australia has a formidable number of players vying for selection, but – like every other team – are just one or two injuries away from disaster. With Ash Brazill potentially making a return to the AFLW, and with the number of serious injuries in that league already this season, fans will be hoping that she comes through unscathed. Expect those athletes who narrowly missed selection – Jamie-Lee Price, Donnell Wallam, Ruby Bakewell-Doran, Maddy Proud, Maddy Turner and Amy Parmenter in particular – to showcase their skills during the upcoming international season.

*2022 Birmingham Commonwealth Games netball data supplied by Longines, who may use different statistical interpretation of gains and pick-ups to Champion Data.