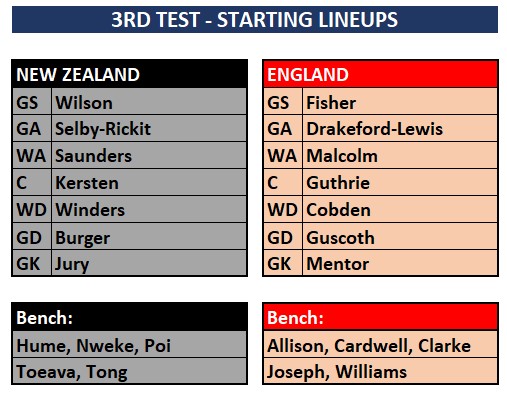 Eleanor Cardwell was on fire and easily the most influential shooter in the third test. Sophie Drakeford-Lewis was given GA bib to start the game but after the Roses only scored four goals in the second quarter, Cardwell was inserted into the game just before half-time. She was unstoppable from that point on, scoring the Roses first 5 goals of the third quarter. The Manchester Thunder shooter showcased her strength and positioning to perfection, giving Roses coach Jess Thirlby extra headaches as the three of her shooters who saw court time in the series had strong performances all at different stages of the games. 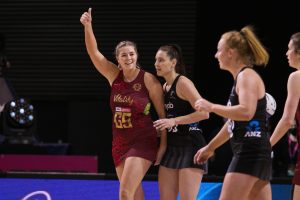 Laura Malcom at WA, was massive for the Roses. Finishing with 25 goal assists with 13 centre pass receives she was a crucial part of the attack end. Playing the full 60 minutes across all three games she was able to show her feeding skills to all three of the Roses shooters and after finishing Game 1 with 7 turnovers she then went on to finish with four across the final two games. Without Nat Haythornthwaite, Malcolm was a calm and composed head on attack and has staked her claim for the bib moving forward. 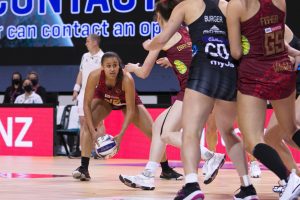 Serena Guthrie. After spending the first half of the match at C, Guthrie switched to WD part way through the third quarter and just reminded us how strong she is in that position. The pressure on Saunders and the Peta Toeava was immense and led crucially to a late game intercept and deflection that ensured the Roses would take out the win.

For the Silver Ferns, Kelly Jury was influential earlier on. Her three deflections made it challenging for the Roses’ midcourt to feed the ball safely into the circle. 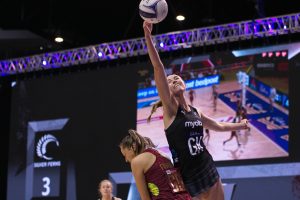 How the game unfolded

With injuries ruling out Silver Ferns captain Gina Crampton, vice-captain Sulu Fitzpatrick and Tiana Metuarau from the third test, the world champions were always going to have their depth tested.

After a first quarter played on even terms, the Silver Ferns took control with a 14 – 4 goal second quarter blitz and looked as though they were going to lock away the Taini Jamison Trophy for another year.

However, some judicious changes from Jess Thirlby, and renewed vigour from the full court defence saw the Roses fight back in the second half of the match. They won the third term by six goals, and the fourth term by eight, to take an historic series victory against the Silver Ferns.

Was this turnaround caused by the Silver Ferns running out of puff, having had less time together out of quarantine? Or was it the class and determination of the Roses to fight back rather than capitulate? 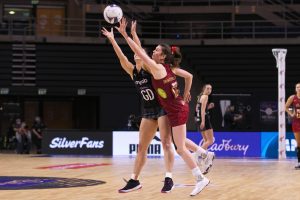 Sophie Drakeford-Lewis was not only strong in attack, but had a good defensive impact in the game. Test 3. Image Steve McLeod.

With Sulu Fitzpatrick ruled out of Test 3 with a knee injury that saw Kelly Jury shift back into her more familiar position of GK and the first quarter it was paying dividends. The shift of Cardwell to GS in the second half was one of the major changing points. The strength and position of her hold against Jury was unstoppable and with 13/13 in the third quarter it was key in the momentum swinging back for the Roses.

For the Ferns, a continued feature throughout the series was the shooter to shooter ball movement and this was also seen in the third test. GA Te Paea Selby-Rickit finished with 20 goal assists, the highest for the Ferns. This helped the Ferns when the Roses defence at times was smothering and still enabled them to work their way close to the goal post. 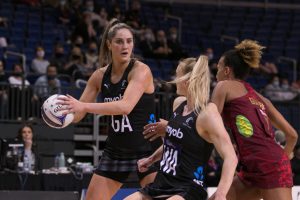 The Silver Ferns have nailed the art of the short game. Test 3. Image Steve McLeod.

As was the case in the second test, the Silver Ferns were slow to react to the Roses changes made at the half-time break both offensively and defensively.

On defence, the famous off marking style that the Ferns play can be highly effective but it does rely on the unit working in sync to be able to shut down the options to set up the turnover ball.

The Roses did their homework and were able to use ball speed and placement to combat this which will give Noeline Taurua something to think about for games moving forward.

Where was it won?

For the second game in a row the Roses outscored the Ferns in the second half, this time 33-19. Reeling off the first 4 goals of the third quarter played a big part in the shift of momentum as well as scoring 7 of the first 8 goals of the final quarter. 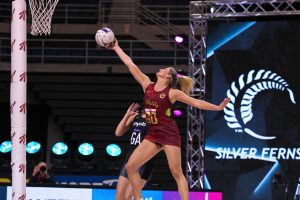 Fran Williams combined well with Geva Mentor, and had a strong impact during her time on court. Test 3. Image Steve McLeod.

A fairly even match stats wise from both teams but with England having 54 attempts at goal and the Ferns 53, the shooting percentage was part of the difference. Eleanor Cardwell, nailed her 13 attempts in the third quarter and then went 12/13 in the fourth quarter, for a final percentage of 96%. Can’t ask for much else from a bench player in the heat of battle.

The Roses would also have been pleased with their ability to convert goals from gains, at a rate of 89%. This was in contrast to the Silver Ferns, whose conversion rate sat at just 67%. Once again the midcourt struggled to transition ball effectively through court, with 11 of the Silver Ferns’ 23 turnovers coming from the midcourters.

“Also I think giving credit to the Roses, I thought the changes were great. They made an impact and we became reactive and I think we also became quite stagnant as well, so a lot of learnings. I know that word gets bandied around, but we’ve still got some work to do.”

“The positive – if it is a positive – is that they are not long term injuries. I was a wee bit worried there yesterday with Sulu in particular but that it only going to be a couple of weeks to get her ready.

“We dont have the same fire power in terms of experience, not making excuses we were up by 10 (goals) we just didn’t do the job or finish it off.

“It just depends on the individual – Tiana played really well in both games, she really stood up and just a pity probably that she got injured, would have been quite nice to see what else she can do and probably under fatigue and see the smarts.

“We got others out there on court and once again it’s a starting point for them and once again probably shows the gap but also what we need to do in terms of the program.

“Really important, because as you say we don’t know when we could get international netball and the only way you can learn or know from my perspective is getting them out there. It is always a fine line because you don’t want to muck around too much, got to keep that balance, when they do it in training environment they have got to be given the opportunity. 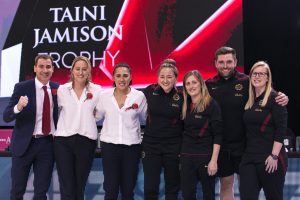 “What a game. You know it’s not ideal to be down by 10 and I think we have to look at that and how we can just in the moment try and recognise what is going on out there. But at the same time, we’ve got girls out there under 10 caps, under 20 caps so I remember going out in my first 25 caps, I was losing to New Zealand by 20 goals. These girls are so much better and in a much better position than I was in my young career.

“George Fisher, it would be easy for her to get on the bench and go into herself after that because they did their homework, she’s a great player and New Zealand are a classy side. But she came out in that third quarter and actually gave us the team-talk, gave us the rocket that we needed. A young player at 22/23 years old understanding the spirit, the culture and what was needed at that time to give herself to the team, actually was what the team needed. It’s a privilege to be a captain of a group like that.

Was MIQ worth it?

“Definitely. We never step out on a court to not win a game and that’s been the intention and the mindset of this team for a very long time and I think to actually put some words into action and get some evidence of some good performances, some positive play out there and adapting in the moment and also how well our changes worked out there. I think we going back home and really look at the performances and understand where we need to work harder as a group and know what was solidified in this series.

Thoughts on the historic series win.

“We spoke a little bit, not too much around the opportunity to create some history and I can’t avoid saying it, it feels great for so many reasons. It’s been two years in the making with of this particular Roses team and it’s just a massive scalp for us to take. I think winning on Wednesday was important to give ourselves the chance to hit out in the equivalent of a final, like we want to make finals netball.

“We definitely did it the hard way, we anticipated that Noeline and the Ferns would come out really strong and I thought we did better to weather that in the first 15 mins but then fell hugely short in the second quarter, you know four goals is nowhere near good enough.

“I don’t think you can underestimate as aside from all the tactical things and the technical execution, the mental belief in a group is so important. I think until that 2018 Commonwealth Games gold that clearly has had a huge momentum shift in how players think and play representing the roses and what’s possible.” 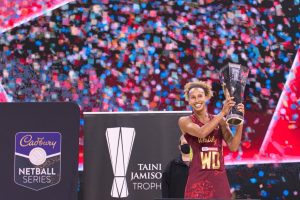 About the Author: Jaimie Keay