Tiana Metuarau has had a year like no other. Catapulted from the bench of the Pulse in 2020 to the starting seven for the Ferns by the end of 2021, she is, at just 21 years old, quickly becoming indispensable in the black dress. She’s lived and breathed netball for a lot of her life, both as the daughter of former Silver Ferns coach and captain Waimarama Taumaunu and a talented young player, first invited to trial for the Ferns at just 16 years of age.  But there’s a lot more to her story, and a lot more to her life off the court as well.

Ko wai ia? (Who is she?) Metuarau’s whakapapa (geneaology) is “Cook Islands and Tahitian on my Dad’s side and Māori on my Mum’s (Ngati Porou). We’re from Whangara in Gisborne on Mum’s and three islands in the Cooks: Rarotonga, Aitutaki and Mauke. I’m a very proud Cook Islander and I’m very in touch with my heritage. It’s been instilled in me. I’ve spoken Māori since I was a kid.” 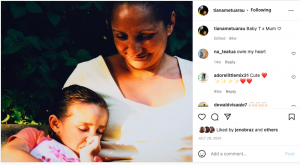 She’s very proud of her whānau: parents Wai and George and her two older brothers, Tuakana and Tanara who – together with Metuarau – were often referred to as “the three Ts” growing up. Tiana looks to Tuakana as an inspiration “for his ability to continue on in the face of adversity.”

“He used to play rugby and was a part of the Wellington squads and the New Zealand Under 21s but he got concussed … he’s now a lecturer at design school here in Wellington and has a Masters in Design and Innovation. It’s why I wanted to make sure I had something going on outside of netball, because as they say you’re one injury away from not having a sporting career. So that’s kind of why I’m still here putting myself through this.”

What Metuarau is putting herself through is a Bachelor of Arts at Victoria University, majoring in education and te reo Māori. She is in her third year on a part time basis, hoping to graduate later this year or next. It’s a far cry from some of the other off court careers she contemplated growing up, which ranged from being a volcanologist (“obviously that’s not me today”), nursing (“because my Mum’s mum was a nurse but then I realised I don’t like blood or any of those kinds of things”) and lawyering (“but then I found I don’t have the patience for that.”)

Metuarau is studying to fuel her passions for “teaching, helping kids in my community, history and Māori.” She comments, “In the future I’d like to help my community as much as possible because I’m really interested in our history and I think it hasn’t been taught enough previously … I feel really lucky that I can learn and I’m learning from really great Māori educators.”

Metuarau with her siblings – the “T” group. Image courtesy of Metuarau’s Instagram

She also treasures the fact that “friends who I study with now, like my friend Aria Hiriwaka, are friends I went to kohanga with”. Whilst it is a demanding course and she and her friends are studying most evenings at the moment, she has the privilege of “really good lecturers who understand my workload”. Tactix captain Kimiora Poi studied one of the papers Metuarau is taking and that has led to her lecturers understanding the demands of her netball workload and travel schedule.

Successfully combining an international netball career and study was not something a teenaged Metuarau could have easily visualised. When invited to trial at 16 for the Silver Ferns, she “found it really hard. I used to cry all the time. When I went to my first Silver Ferns trial I was crying on the tarmac and Whitney (Souness) was in front of me … I just felt so bad because she already had enough on her plate, she had to focus on her own trial and if anyone knows Whit, she’s just the most selfless person who always puts everyone else before her.

“I almost felt bad because I knew she was probably going to put me before her own trial and make sure I felt okay. Those kinds of things … are a reminder of how young I was and how unprepared I was …  I’ve definitely grown a lot since then and grown a lot as a person.” 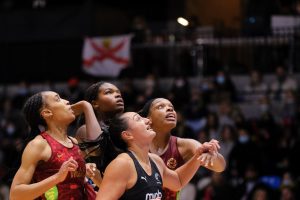 Metuarau was first invited to trial with the Silver Ferns as a 16 year old, and has gone on to become one of their key shooters Image: Ben Lumley

As her netball career moved forward in a rollercoaster like fashion (from the starting seven to benching for the Pulse, from being named in then dropped from the Ferns development squad), Metuarau experienced anxiety, and this really came to a head when she made the call to leave the Pulse in Wellington and move down to Invercargill for the Steel in 2021.

Metuarau was fearful of being away from her family and found the decision to move to a new city in order to get more court time incredibly difficult as a result. “I took a while, cried a lot and left it to the day before everything had to be signed and announced. I was actually about to sign with someone else. I was on the phone to Lana (Winders, Chief Executive of the Steel), as Mum told me that was the best way to turn down a contract, when she (Winders) suggested something to me and I just couldn’t say no and I didn’t want to be mean and so then I ended up with two contracts on my hands and I didn’t know what to do.

“I had a good chat with my manager and Mum, who really wanted me to go down there as she had heard such good things … and that was how my decision came about.”

“I probably cried the first two months down there and really struggled and any opportunity to come back to Wellington I took it, so I suppose it was just that sick feeling, I just really wanted that to go away. By the end of that, it had and I could go away on tours with the Ferns and be away from Mum and Dad for a month or whatever, it was alright. That’s something I’m really proud of.”

Metuarau with her Steel teammates. She formed a strong on court partnership with George Fisher. Image courtesy of Metuarau’s Instagram.

Metuarau in part credits the supportive environment down south for that major personal leap. She found the Steel to be “just so accommodating” and enjoyed the “humble, hardworking culture”, the “kind and friendly people” and the community which “lives and breathes netball.”  “It was just nice to be embraced by such a lovely group. Anyone who gets an opportunity to go down there should definitely take it.”

When her call up to the Ferns came at the end of the season, she felt “a bit more confident in myself and like I deserved to be there.”

Early advice from her mother that things would get harder once she got into the Ferns environment turned out to be true. When she first heard she’d made the squad, she was “on a farm at Kate Heffernan’s house. I wasn’t really tuned in, I was just stoked, but once I got there I realised what Mum meant.”

“I suppose we are athletes so we are critical people, we are perfectionists. I think I’ve slowly started to understand that’s what Mum meant.” 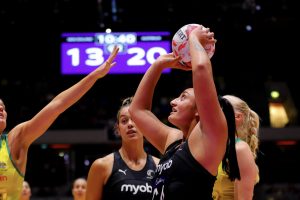 Metuarau has developed a number of strategies this year for managing this pressure. She tries not to read about herself online. “When I was younger … I didn’t like people writing mean things about me online. I used to read everything which is something that you do and I suppose that’s the danger of social media.”

She intentionally surrounds herself with “really good people” outside of the netball environment and, on advice from her mother, makes sure she always has something to look forward to outside of netball. This includes a developing passion for photography, with an Instagram account (@shotsbytiana) full of beautiful photos.

Taught by her brother, she describes it as “…  a hobby of mine and quite fun to do outside of netball … I get to force (my friends) to get in front of the camera!”   “Anyone who knows me knows that my camera roll is just full of selfies and pictures of my friends and food and sunsets and whatever.” 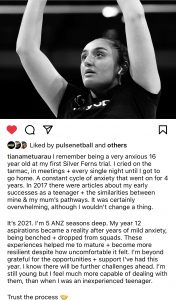 Anxiety is something that Metuarau has struggled with for some time, but she’s learned coping strategies to manage the condition. Image courtesy of Metuarau’s Instagram.

This holistic approach to work and life has come in handy this year with the added burden and honour of captaining the Pulse, alongside Kelly Jury. The captaincy has been a real learning curve for Metuarau, who describes the biggest learning as “the importance of how you approach others, how you get the best out of others, but also at the same time how you get the best out of yourself … I’m still trying to find the balance.

“The last few games I’ve probably been yelling a bit more than usual and it’s probably worked a lot better for me with my performance … I think I’ve had a few lulls this season where I’ve been a bit inconsistent or just a bit more quiet than usual but other than that everything’s going really well and Kells is doing awesome too.”

Metuarau has finally reached the point where she feels “my voice is valuable enough … I can encourage people to play better, feel more confident with their game.” And it’s hard not to see this voice making a huge impact, both on and off the netball court, in the years to come. 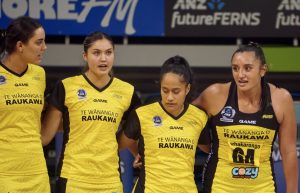