This is part one of a two-part interview series that covers discussions with performance psychologists about peak performance and the impacts of Covid within Suncorp Super Netball and the Victorian Netball League.

The Melbourne Vixens, one of two Victorian SSN teams, found themselves at the bottom of the ladder in 2021, coming off the back of their 2020 Premiership win. Alongside this, the team were amongst the hardest hit in terms of relocating between states and not being able to return home, as Victoria has just come out of what was collectively the longest lockdown in the world.

Therefore, it comes as no surprise that the implementation of strategies around team mindset and performance in the 2020 and 2021 seasons was different to a typical season. To understand this difference and how the team was supported during the 2020 and 2021 seasons, Tony Glynn, Performance and Clinical Psychologist at Fit Mind Consulting, discusses his experiences working closely with the Melbourne Vixens since 2015.

Glynn completed his Masters in Sport and Exercise Psychology in Queensland and later relocated to Melbourne. It was after a trip overseas to the UK, where he was working with the National Health Service within the child and adolescent mental health space, that Glynn returned to Melbourne to attain his degree in clinical psychology. Glynn started seeing some players in a one-on-one setting, while also working at the Royal Children’s Hospital, and developed a solid working relationship with Simone (McKinnis) and the Vixens. As Glynn says, “The rest is history”.

To understand more about the team requirements, it is first important to look at what makes netball unique to other sports. As a team sport, there are many factors that must come into consideration when attempting to maximise team and individual performance. Glynn has also worked as a psychologist with other sporting organisations, including with the Victorian Institute of Sport Sailing team, Tennis Australia, and Cricket Victoria.

“Netball is a team game. Being part of a team that connects and can function both on the court and off the court are important parts of netball-based work. Some of the challenges in a team environment are that you must be with each other all the time, and you have to manage that.”

“Performance psychology would be different for shooters, defenders and midcourters, so you would work with them separately; whereas in sailing, which is more individual, you campaign on your own, and you’re overseas in Europe for months at a time. So, there are different demands around the sport, like sailors need to make complex decisions and solve problems very quickly.” 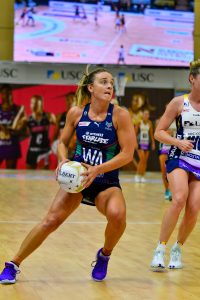 According to Glynn, performance psychology has to be tailored not only to individual players, but to different positions on court, based on their unique requirements. Image Simon Leonard.

As with any sport, the application of performance psychology must be unique to the context and this is a speciality of Glynn, who focuses on integrative consulting.

“The application of integrative consulting over the last couple of years has been unique as teams have been away. It has been largely liaising with players, coaches via Zoom or phone. In the past, we have done things where I might be around training or run small group sessions, which can then be taken out onto court. I have even worked with a shooter on court to help them develop routines or strategies in relation to the shooting.”

Given the unique hub environment in 2020 and being away from the team, Glynn talks about how being proactive about the challenges the players may face was an effective way to assist players in the unusual environment.

“Early on, when the group was up in the hub last year, we did some pre-emptive stuff about how they can get the most out of the hub life and themselves in that environment. We did a lot of Zoom sessions, maintained contact through phone calls and individual sessions as well.”

A part of this preparation also involved talking with players, before the relocation to Queensland in 2020, about how to manage expectations and embracing uncertainty. Specifically, this was around reframing experiences to see the learning in the challenge.

“There was a lot of talk about uncertainty and something that we talked about in 2020 was around embracing the uncertainty and accepting it; that it was probably going to be unfamiliar and stressful or uncomfortable at times and trying to find that opportunity for growth that wouldn’t be there otherwise”. 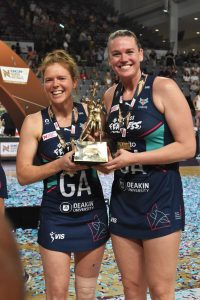 Despite the setbacks of last season, 2021 was especially difficult for players to plan, due to the unpredictability of the season.

“Some of the players thought we would be coming back to Melbourne in 2-, 3- or 4-weeks’ time, so many thought that they don’t need to maintain the connections and will instead pick them up once they return but it didn’t turn out that way. I think we could have prepared for that increased level of uncertainty this year, a little bit more than we probably did.”

As expected, this meant that preparation and pre-game routines had to shift under the unusual season format.

“They had to prepare in different ways. If they were in quarantine, it was difficult to train in the way that they wanted. Or if they wanted to have a nap before a game, for example, maybe they couldn’t because they had to be on a bus from A to B, which if they were in Melbourne, they would be able to do.”

However, the Vixens continued to demonstrate positive thinking and a growth mindset, despite struggling to win games and return home.

“I think what the girls did really well was being gracious in that positive. Even though it was hard for them, they were still aware that they were still playing netball and doing something that they loved when people were in Melbourne and not able to do that.”

Regardless of the interruptions of the season, players usually have an element of their game that they want to work on individually from year to year.

“Players are building from last year, moving into the next season and evolving their game. For some of the players, a lot of the on-court stuff didn’t change. They might be working on trying to execute in the first 5 minutes of the quarter, rather than taking 5 minutes to get into the game, for example.” 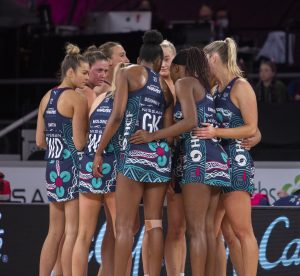 Glynn works with these individual elements in a one-on-one format, but also conducts group sessions to help build psychological skills.

“There have been things we have done as a whole group, such as mindfulness training and insight profiling to learn about one another as people. We have done things on problem-solving and growth mindset in the group format. There are certainly also elements of a person’s development that are different. For example, some of the senior players might be doing more around leadership and the less experienced players might be starting in different areas.”

These group format sessions are regular in pre-season and athletes will contact Glynn throughout the season, perhaps once a week, before and after a game or once a month, for individual sessions.

“Some of the group stuff is mandatory and everyone does it. The individual stuff has largely been chosen by players. Sometimes the coaches will suggest it. The group stuff happens mostly in the pre-season and the individual stuff occurs throughout the year. The Victorian Institute of Sport are changing some of the funding for psychology, which is really good, so hopefully that will give us a bit more scope to do some other things throughout the year.”

On a more personal level, Glynn says that over the last six years, he has thoroughly enjoyed being within the culture of the Vixens and working with a club that is uniformly dedicated to supporting players.

“I’ve said to Simone (McKinnis) and to Rebekha (Webster), I really enjoy the culture and I think they are a fantastic organisation and the way they treat the players, and the staff is excellent. That sense of respect and camaraderie and everyone pulling in the one direction and trying to get the most out of the athletes is probably what I enjoy most.” 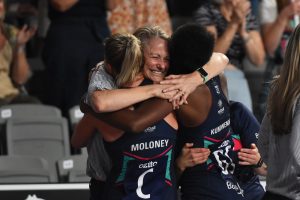 As coach of the Vixens, Simone McKinnis has embraced the importance of performance psychology. Image Marcela Massey

The landscape around mental health in sport has been shifting, particularly over the last five years. While athletes have become more outspoken about mental health, which has helped to drive support and funding in the area, there is still one substantial way that Glynn believes mental health awareness in sport could be improved.

“It is sometimes difficult to differentiate what is the challenge from the expectation of the high-pressure environment and what would be a mental health concern, which would be an abnormal consequence of that pressure. That is a good representation of how to help people from a performance perspective to get the best out of themselves.”

Balancing mental health and high expectations can be difficult. Spreading the awareness of these factors is essential to advance performance mindset application across different sports.

“This is quite complex but as a performance and clinical psychologist, I have a good understanding of what is a mental health matter and what is a performance matter. It would be great to help the system to be able to appreciate these differences and still from a performance perspective drive standards and have high expectations, but also be sensitive to the mental health of the athlete.”

This balance will continue into 2022, as players adapt back to what is hopefully a season with increased stability and access to the usual resources and routines. With the insight and skill of Glynn and the support crew at the Vixens, there is no doubt that they can rebuild and come back bigger and stronger.