NS EXCLUSIVE: View from the Bench with coach Lisa Alexander

NS EXCLUSIVE: View from the Bench with coach Lisa Alexander 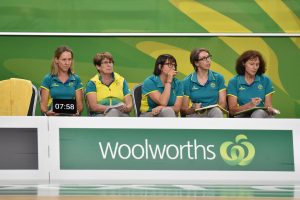 “After three heavy defeats by the Fever, Lightning did their homework really well for this match. Coach Kylee Byrne is very analytical, and would have looked at footage of teams that have done well against Fever in the past, particularly the Firebirds in Round 7. (The Firebirds outscored the Fever in regular time, but lost in the supershot periods).

“Watching via the TV, this match felt like it had finals quality and intensity, although it’s not surprising that the Fever were a little bit flat. They’ve had a very big first half of the season, with seven wins in a row. You are going to get a dip at some stage, that’s natural. I remember Wayne Bennett (rugby league coach) saying the season is about getting into position for finals, which is the “second” season.

“Your team is going to have times when you are not quite on, and it can be more tiring playing at home. Your energy seems to be sapped a bit more through the extra media and attention, and this is certainly something we experienced at international level when we were playing in Australia versus playing overseas.

Also, I think other teams are starting to look more closely at the changes Fever have made to their team across the off season. The way they are playing has been brilliant, using a strong game plan that suits their strengths, but other teams are now doing their homework. However, while there are very smart coaches and performance analysts that come up with a game plan, that team has to be disciplined enough to stick to their task if they want that win, and Lightning did it well on the weekend.”

“Cara Koenen played a very smart game on Courtney Bruce, playing up on her body. It’s almost the opposite of what a coach will usually do, which is telling a defender to stay close and sit tight, one on one. However, Courtney’s strength is staying off the body and hunting for balls. Cara turned that strategy on its head. She found Courtney as much as she could, and worked off her body. This is what the Silver Ferns prefer to do when they play against Australia – they don’t want Australian defenders to have the air time.

“So with Courtney stuck one on one on Cara, she was exposed with that swing across the circle and triangular play. Courtney got quite a few penalties as a result (19). Cara did too, for a goal shooter (9 penalties), but I think Lightning were prepared to wear those extra penalties if the strategy worked.

“The other thing that was really evident, was Maddy McAuliffe on Verity Charles at centre. Verity has been identified as a major feeder through to her goal attacks and more importantly to Jhaniele Fowler, so slowing her down was really important. She was double-teamed on the centre pass, and I thought McAuliffe played a strong tagging role against her, particularly using her height and her wingspan.

“Maddy’s got a big wing span which really disrupted the feed into the circle, and she also tried to keep Verity off circle edge as much as she could. That forced the ball up into the air, and gave the defenders that little bit more time to look at it. Karla Pretorius and Phumza Maweni definitely took advantage of that. As a result there were a few misplaced balls that sailed over the back line that Jhaniele didn’t gather as she normally would.

“Australia has used that strategy against Jamaica in the past – we’d try to keep the feeders off the circle edge, high and wide, and make them feed from off the circle so that our defenders would have time to get around and try for the intercepts. It was very effective.

“I also thought Laura Scherian played very well. It was a tough game but she cut and drove really well, enabling Lightning to penetrate deep into the attacking third on the second phase of centre pass.

“Steph Wood also did a lot of work, and that’s what she must do, to have the light and shade of herself and Scherian on the transverse line at centre pass. That was missing a little bit for Fever. Alice Teague-Neeld and Emma Cosh are both traditionally goal attacks who use timing rather than speed on the centre pass. Emma is good, but she hasn’t quite got the speed that Verity has, to provide that contrast that’s needed.” 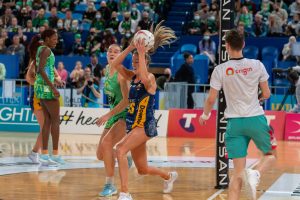 In an effective move that Lisa Alexander described as almost counter-intuitive, Cara Koenen positioned herself on Courtney Bruce’s body, and peeled off to take passes. Image Clinton Bradbury

“It was one of the best games we’ve seen Steph Wood play in quite a while. It was her work mode and work ethic that was world class. That’s what she must do to position herself as the number one goal attack in Australia and play for the Diamonds. She has to put that work load out for sixty minutes – she knows it and Kylee Byrne reinforces that. It’s what her team needs from her. In this match Steph was smart in attack, and she also worked hard in a committed and disciplined defence. Steph is often a team’s bell-weather, and if she is playing like that, Lightning are very hard to beat.

“Maddy McAuliffe’s skills can be overlooked at times. While she was originally signed for Lightning as a wing defence, she is also a good attacker – I remember taking her for sessions at junior development level back in Queensland. She’s always played centre as a second string to her bow, and like Jess Anstiss is highly underrated in that position.

“Maddy can feed the ball into the circle, and I think is a bit calmer than some other centres in that position. And the other advantage of having her on the circle edge and moving the ball, is her height advantage against centres who are generally shorter. With Maddy’s height, it’s far easier for shooters to find her on the circle edge. It was a big advantage for her against the Fever.

“One of the things that Lightning did well was playing to Courtney Bruce’s weakness. She can get caught with her head turning – when a team is playing the ball around the circle edge, Courtney can get caught out by that. So she will need to work on her footwork, and be much more proactive in keeping the shooter where she wants her, and not the other way around. Courtney has worked on this over the years, and Stacey Marinkovich will know what to do before their next game.

“I’ve loved seeing what Alice Teague-Neeld has achieved over the last couple of years, and she was good again in this match. I remember the heartache she’s been through when she lost confidence and her form dropped – it was soul destroying. So for her to be so resilient and come back like she has, and playing like we know she can play, is wonderful to see. Alice is a very clever goal attack, she’s got timing, and she’s really busy in defence – this has been particularly noticeable in her last few games. She deserved the start and when she went off, it did disrupt Fever a bit.

“It’s pleasing to see her do so well, and the swishers – particularly the two pointer – were beautiful.” 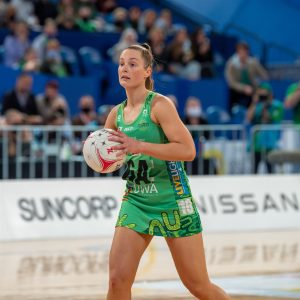 The court craft of Alice Teague-Neeld has been a key ingredient in Fever’s attacking line. Image Clinton Bradbury

What could a coach have done differently to change the course of the match?

“While it might seem a simplistic answer, for Fever, I would have started with the same team that seemed to have the wood on Lightning in the first round, and settle with that combination. Fever have been playing around with their combinations a little bit. That’s natural – you need to do that as a coach – because you want to find what’s going to work well for you in finals. But at the end of the day, the Lightning centre court took the points against the Fever.

“The match ups were really important, and it might have been better to start with Jess Anstiss in centre and Verity Charles in wing attack. It would have added Verity Charles closer to the circle edge and the goals, and added speed into what we saw as a hesitant attacking unit. Anstiss provides strength and some solid centre court work. I think Fever’s centre court of Stacey Francis-Bayman (wing defence), Anstiss (centre) and Charles (wing attack) has been stronger overall, and it would have been better to start with that in my view.” 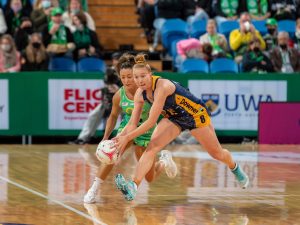 Maddy McAuliffe used her height and arm span to good advantage in the battle of the midcourt. Image Clinton Bradbury