NS EXCLUSIVE: View from the Bench with Kiri Wills

NS EXCLUSIVE: View from the Bench with Kiri Wills

Have you ever wondered what an elite coach thinks as a game unfolds? For match three of the 2021 Taini Jamison series, Netball Scoop is delighted to share the insights of Robinhood Northern Stars head coach Kiri Wills.

A former New Zealand Under 21 representative, Wills has an impressive coaching background. Her coaching career started at the prestigious Auckland Girls Grammar School. She quickly progressed to include assistant coach of the Northern Mystics, Silver Ferns Development Squad Coach, and New Zealand U21 coach. In 2017, Wills led the U21 side to historic back-to-back World Youth Cup titles.

This was another game of two halves. The Silver Ferns came out strongly and had the measure of the young English goalers in the first half. But it was England’s experienced mid-court who eventually got them back in the game and eventually saw them walk away with the trophy.

When English head coach Jess Thirlby switches players, the strategy is still the same, but the personnel play so differently. So, if you look at that shooting end and how someone like Sophie Drakeford-Lewis plays compared to Eleanor Cardwell out at goal attack, or when Eleanor drops back to goal shooter instead of George Fisher, the strategies don’t change by the dynamic changes and the way those individual players go about their game impacted on the performance of that shooting circle. That is where I think England had an edge in that their changes brought a different dynamic. The Ferns didn’t adjust.

England, throughout this series, started each match hesitantly. And, then by the third and fourth quarter, they began to let the ball go into the circle. They got quite a bit of length and width in their attack. They played with more courage. 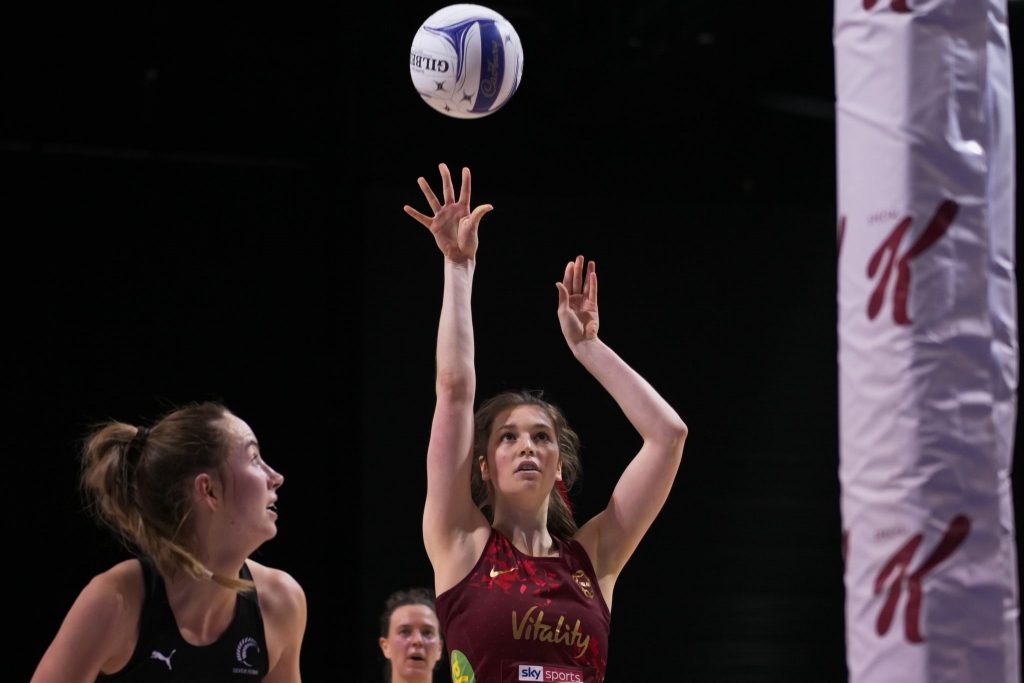 Roses goal attack Sophie Drakeford-Lewis was given too much space in match three. Image: Steve McLeod

The Silver Ferns strategies didn’t change from Game One to Game Three. The things which weren’t successful earlier were still the same things that let them down, probably in the third and fourth quarter of this match.

We play a lot of isolated defence in New Zealand, whereas if a shooter gets the ball outside the circle, we drop both defenders back towards the other shooter. They were meant to be looking for a lot of intercepts on the circle edge. We just didn’t quite have that connection going well enough.

The outside circle defenders were meant to be pushing their players in a position where we could attack the ball, and they just didn’t do that. When Drakeford-Lewis was passing and cutting on us in every single game, we allowed her too much room. I felt that there needed to be a change in the circle defence strategy to a little more one-on-one, which would have maybe picked her up a bit earlier. She was simply allowed too much space to run the front.

Looking at the combinations which Silver Ferns head coach Noeline Taurua has put on: their build-up has been quite limited, so I feel she had to rely on past connections. Unfortunately, they are reliant on that at the moment because they haven’t had a lot of time together.

Eleanor Cardwell performed a lot better on Kelly Jury because of her hold. Elle’s hold is a lot stronger and more upright, and she doesn’t tend to move off her hold as much as George Fisher does. Kelly needed to come off the body a lot more to get around and contest.

Serena Guthrie has so much energy, and she is always in the fight. But for some reason, and it has happened every time she switched back to wing defence, she is just that much more dogged. She defends for 3-4 seconds, which means she comes up with quite a lot of ball.

With Serena and Jade Clarke out in front of her, it was hard for any of the Silver Ferns wing attacks or centres. There was a real shutting down of that space for the Ferns. They just couldn’t get to circle edge. They were forced into really short passes because Jade and Serena were just so hard on that man-to-man and pushing them up and away from the circle edge. It meant that every time the Ferns turned, they were too far away from their shooters and had to pass another square ball, and someone else had to come through. I think the defensive outside pressure from all of them, including Beth Cobden and Imogen Allison, was excellent. But with Serena and Jade, it was tightened up another level. 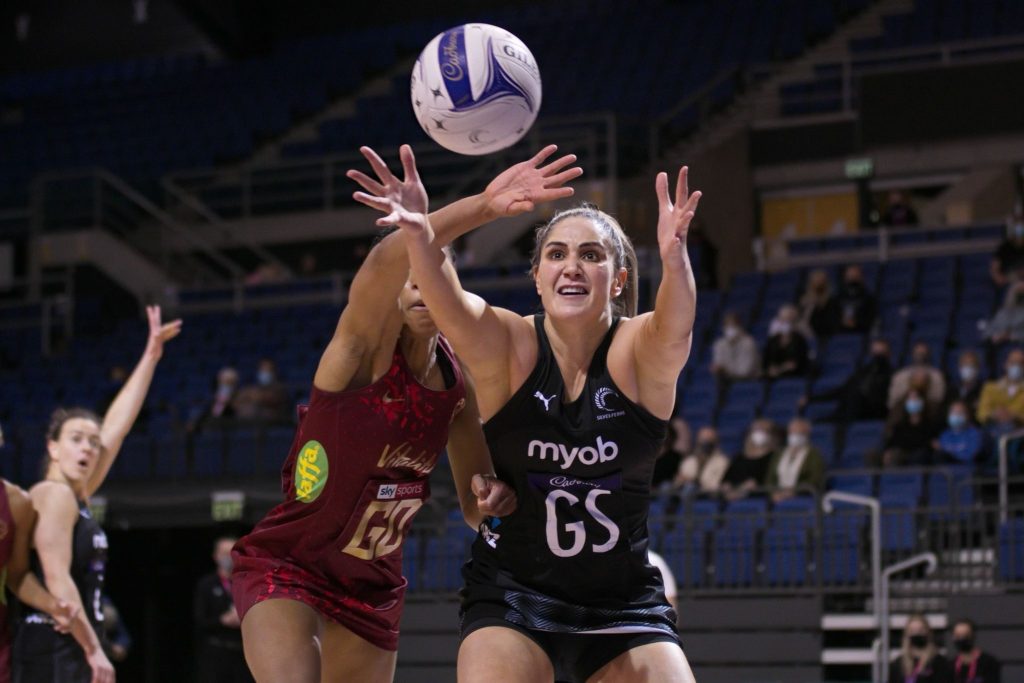 TP and Maia have a great understanding of each other’s game. There is always one presenting to the ball and one setting up. It means that if the ball doesn’t go to the post straight away or there is one on the edge when they turn, the other one will always be there open. In this match, those shooter to shooter offloads were critical.

I thought this was one of Maia’s better games that she has played in a long, long time. Being her club coach, I know she had a heartbreaking end to our season, so it was terrific to see her performance in this match. Maia is tough to come around once she pins that hold. Her baseline drive allows her to do a lot off the hold. She is actually quite mobile and quite quick. She was getting some beautiful drives and timing. If the feeders are brave enough to let the ball go, she will generally get there.

I was very impressed with Layla Guscoth this series. She is so mobile and really quick.

Geva Mentor has shown this series that she has the headgear to deal with whatever is thrown at her. She just changes things up if they aren’t working. They know they can rely on her. 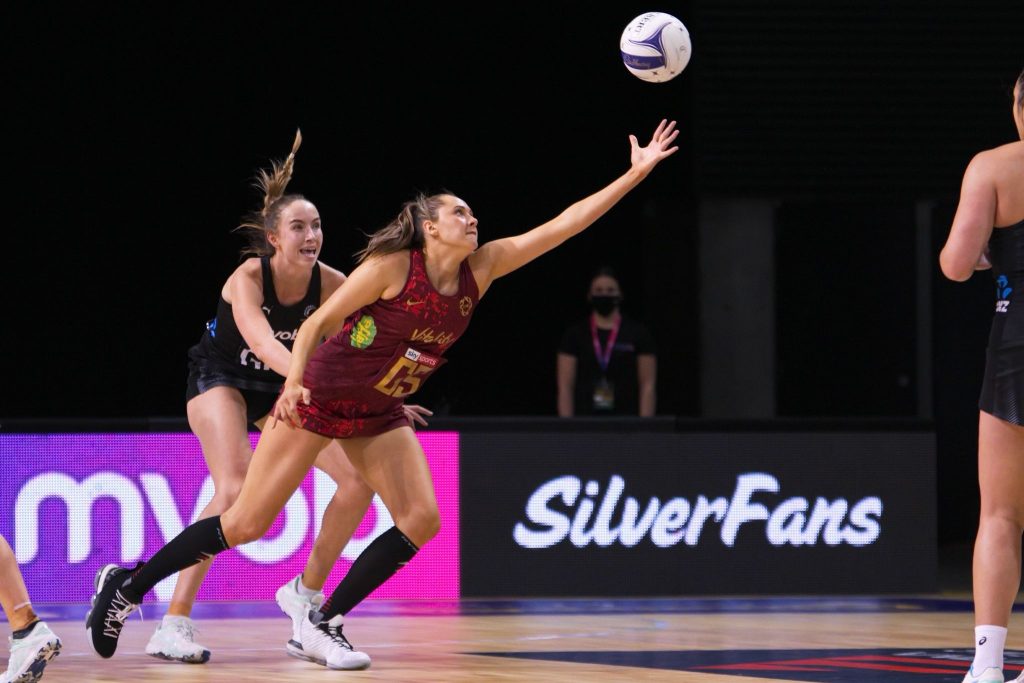 Roses coach Jess Thirlby will have some tough decisions to make with her front end rotation for future matches. Image: Steve McLeod

Looking Ahead to the Test Matches Against Australia

The amount of depth in this side is a great place to be for Jess Thirlby to be. She is going to have a lot of tough decisions to make. Especially in that shooting end with those players to integrate from Australia. The young ones look like a very together group, and they are happy to be there. But selection pressure gets to all players, so she will need to manage that as well. If she manages that well, she will be fine. It is very exciting for England.

That said, versing Australia is going to be hard for England. The Aussie style is very hard on the body. That will really test some of the less experienced players in the attack end. They won’t have the space to work in that they had against New Zealand. So, they will need to look at changing things in attack in terms of how and where, they receive the ball to create space for themselves.

Defensively I don’t think they need to change too much. The Aussies will be a little more mobile, less holding more movement. I think if the defenders can get their switches relatively seamless, then they should be okay. They look like they have that understanding building.

Midcourt is more of the same. These three tests were quite physical with not a lot of space. But if England can retain that courage to let the ball go, even when the space isn’t 100% clear, and they take the ball hard, they will be fine.

I am interested to see how the defence matches up against Gretel Bueta. She is so different from any other goal attack in the world, so she is always a considerable challenge. And I feel it is about restricting her space and making her work hard on her approach.

The Silver Ferns midcourt are quite physical and adept at moving in little space. We spend more time in space trying to force players into certain positions and blocking space, whereas Aussies are on you the whole time. 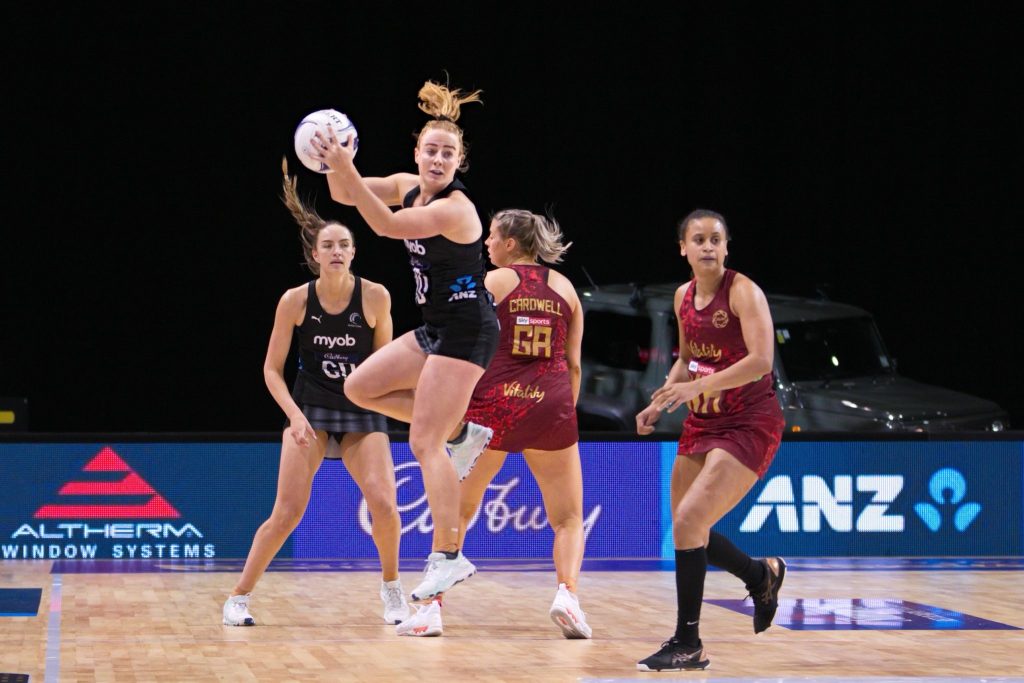 Unfortunately, there are still many questions to be answered in terms of who can step up into the international level and who can’t. I think people were questioning Noeline’s selections, but she has got to try these people at this level now. She has a very short turnaround until Commonwealth Games. We are having more international tours cancelled than go ahead, so she has got to blood some people and see how they go regardless of how much build-up they have had.

They were asked, ‘can you do your job?’ There were players who put their hand up, saying yes. Others were unsure, but Noeline will still want to test them.

Of particular concern is our lack of current depth in the goal defence and goal keeper positions. We saw in each test only three selected, and then with Sulu Fitzpatrick out for the third test, and we saw Georgia Tong get in there. While she is a capable player, we look to players returning from pregnancy or injury to fill those voids in the lead-up to Commonwealth Games. But will those athletes be ready for a January tour is the question I would be asking?