This was a very high scoring match, and the margin would have been even more significant without the supershot, as the Swifts sunk nine to keep themselves in the game.

We witnessed some really solid coaching by first year coach, Nicole Richardson, and her assistant Kate Upton, as the Magpies have grown and built across the season. They were totally on point in this game.

In contrast I thought the Swifts looked tired, they’ve been on the road for a long time which has probably impacted them.

They were also clearly missing their coach, Briony Akle, who at the time of this match, was still in quarantine in Adelaide. I think her team are reliant on the energy she gives them and the appropriate changes she makes. Mostly that is a good thing, but in this situation the players weren’t able to get themselves into the match.

Under the current Suncorp Super Netball rules, players have become more conditioned to coaches being able to change momentum through time outs and rolling subs. I believe it first became apparent at the Diamonds’ level in 2018 and 2019, and it’s a real concern. More attention must be paid to the challenges it’s creating for our national programme. 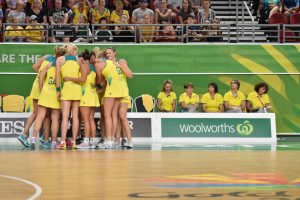 Athletes have to be able to work independently of their coach if needed. Image Marcela Massey

Key strategies of the match

The Magpies’ seven that were out on court played beautifully as a team, and really lifted and supported each other.

Molly Jovic ran the centre – she’d listened to her coach and clearly executed the game plan that revolved around speed in attack. The centre court worked so well together – the ball movement into Shimona Nelson was so quick it left the Swifts’ defence limited time to react. Molly, Kelsey Browne and Gabby Sinclair all let the ball go so fluidly.

Kelsey was the dominant centre pass receiver, and this was a clever strategy because it exposed the speed mismatch between her and Lauren Moore. This allowed Molly or Gabby to control second phase, and Gabby to largely set up the feeds into the circle. She had a strong connection with Shimona, although we also saw some beautiful triangular play which had the defender’s heads spinning.

In contrast, we once again saw the Swifts move away from their controlled, short, sharp passing game. Their attackers were running long leads but unfortunately their timing was out – they needed more than one option to the ball, and to change up the timing of their leads. It became too easy for the Magpies’ zone defence to cut off the passes, with their back three coming up with 14 gains between them.

The attackers also needed to work harder in their full court defence, to try and slow down the Magpies ball speed. As a result, we saw a lack of fluency and combination in the Swifts’ back end. Despite this, they won plenty of ball, but ran into the Magpies defensive zone during back line throw ins.

That showed both the discipline that Nic Richardson has instilled in her full court defence – she’s done it with all the junior Victorian teams she’s coached – but also a lack of understanding by the Swifts in penetrating that zone. There were too many lateral passes, with a lack of punch and penetration down the court. As a result the Swifts were only able to score from 17% of their gains, which is unacceptable at this level.

If a team is faced with a defensive zone, they need to find their opponents body, and work off it. In this match, I don’t think the Swifts knew who would take responsibility for that. Maddy Proud definitely wasn’t her usual self – she needed to sprint hard away from her opponent, or to play her natural game which is to run in repeat efforts, taking every second pass. 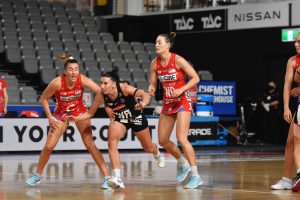 The Magpies defensive end is one of the best in the league.

Geva Mentor does her job, without trying to do too much, creating important turnover ball for her team. Jodi-Ann Ward has got better with each game. She was sticky on Helen Housby in this match, and the Jamaican coaches would be rubbing their hands together knowing she can run with a world class opponent.

Ash Brazill was solid, playing great team defence rather than overplaying her hand. She’s picking the right time between having a crack at the ball, and shutting down her wing attack to be an arms over presence between them and their shooting circle.

Finding that balance is one of the important things a wing defence spends hours learning. They might be superb at using their closing speed to intercept the ball, but then will miss the repeated hard graft for the next few centre passes.  And while fans find it spectacular, for a coach it doesn’t always work in the team’s favour. I think we’ve seen wing defences such as Ash and Renae Ingles struggle with that at the start of their careers, but develop it as they’ve become more experienced. As Laura Geitz would say, “Happy days when Renae was playing wing defence in front of me.”

Molly Jovic, who funnily enough I taught mathematics in Year 10, was superb. As a junior she was too physical and basketball-like at times, because she was talented at both sports. This year she’s fitter and very clever –she is so advanced, compared to some of our other centre courters, at putting balls into the circle because she reads the space so well. Her defence is also outstanding – she’s really nuggety and can grind opponents out of the game.

Kelsey Browne has really worked her way into form across the season. She is so fast, and speed is important to have in a team. Kelsey can also feed different types of shooters, she’s experienced, she’s fitter than she’s ever been, and she can run centre.

In a team, it’s vital to be able to mix up speed with steadiness or timing. You always need light and shade, or to have more than one player against different opponents from different countries. An athlete or style that might work well against a gritty wing defence like Sam Winders from New Zealand, might find it far less easy against the long arms of England’s Beth Cobden, and vice versa. Beth was a nightmare to match up against in the gold medal match at the 2018 Commonwealth Games, and you need a range of options to try against someone like that.

Shimona Nelson was outstanding. The Magpies looked calm, and in control of their turnover ball, and I believe that gave Shimona a lot of confidence. She wasn’t worried or pressured by a missed shot as she had belief in her team being able to win the ball back.

Collingwood have spent a lot of time increasing her strength and fitness, and doing lots of repetitive ball work. She’s starting to understand what it’s like to be a professional athlete and the discipline needed to succeed at this level. 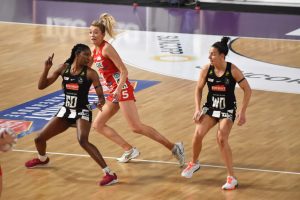 The Collingwood defensive unit are one of the best in the league this year. Image Marcela Massey

Sarah Klau got into position against Shimona, and any ball that wasn’t perfect, she picked off. However, it was difficult for Sarah because balls were flying in so quickly, and when they were perfectly placed there was little she could do.

For the Swifts, Paige Hadley tried hard across all three midcourt positions, but I think she lacked a level of support from the athletes around her. She and Ash Brazill really nullified each other, and I think Paige should have been shifted into centre against Molly at an earlier point in the match.

Maddy Proud was out of sorts, and had 11 turnovers in this game. Turnovers by a midcourt player are devastating, because it is quite often a two goal turnaround if your opponent then scores. So if you’re a centre court player, and you make a mistake, you have to immediately transition into defence and work hard at it.

While there are different causes of turnovers, for some players like Maddy, it’s in their passing technique. They become too reliant on an overhead, two handed pass, instead of a one handed pass.

A two handed overhead pass is easier for the opposition to read and pick off, and you also struggle to get enough flight on the ball. When you are passing a lob, you need to have a careful touch and a good parabola. Instead, we saw Maddy passing towards hands, rather than up and over them into the space. A good centre court will know how to create space in the circle for their shooters, but in this case Geva and Jodi-Ann had far too many opportunities to pick off the ball.

At 184 cm, Sophie Garbin isn’t the tallest goal shooter around, but she can still beat anybody. She has an enormous vertical jump that’s very powerful and well timed. While Sophie can post up, she can also can dodge along the baseline, come out through the top of the circle, or take a long drive. Because she’s not as tall as other shooters, feeders do need to be more accurate with their passing, but she holds so strongly they can find her easily.

Sam Wallace was down on form, and Sophie could have come on sooner.

Gabby Sinclair was totally in control, and Maddy Turner didn’t know where to position herself, whether on Gabby, or dropping back to double team Shimona who scored 69 goals in this match. That is quite a negative move, but Shimona was so strong, it might have put more pressure on the fast passes coming in.

However, more work needed to be done out the front, particularly by the Swifts’ goal attack and wing attack to hold the Magpies in the centre third as long as possible.

The Swifts should be playing finals, and once they’ve had time to refresh themselves, I think we will see them back with the trademark enthusiasm and purpose that was lacking today. 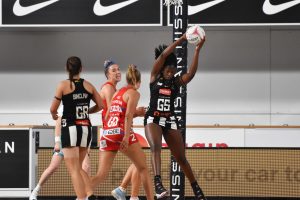 The ball was coming in to Shimona Nelson too quickly for the Swifts defenders. Image Marcela Massey