The Thunderbirds had a grinding, gritty team performance which indicates to me that they’re on the way up. They played well together – their defensive unit was particularly effective and their shooting circle was on point. The interchanges with Hannah Petty, Maisie Nankivell and Elle McDonald in the centre court were well crafted by coach Tania Obst. She did a terrific job of coaching, as did their assistant, Cathy Fellows, who has a thorough understanding of the Victorian system and exploited the Vixens’ strengths and weaknesses extremely well.

In contrast, I was disappointed with the Vixens. The score line was somewhat flattering because they successfully hit six super shots to the Thunderbirds one. It isn’t easy to back up a premiership win, and the Vixens were always going to find it more difficult after losing three of their key players. However, they haven’t shown the same growth this season that some of the other teams sitting in the second half of the ladder have.

Their attacking play has been quite hesitant, and has lacked fluidity, but their defensive end has also struggled to have the same impact that we’ve come to expect. With five of their ten players circle defenders and wing defences, their team balance might need addressing across the off season to give them more options in attack. 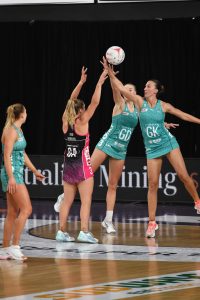 Something the Thunderbirds did exceptionally well was their defence of the Vixens’ centre pass. Adelaide used their goal defence or wing defence for just 10% of their own centre passes, while the Vixens’ used it for 30% of theirs. Generally speaking, going backwards should be used proactively as a surprise or a change-up, but the Vixens had to use it reactively. It altered their timing into attack which was what the Thunderbirds wanted. They were able to keep the ball occupied in the midcourt for as long as they could, allowing Shamera Sterling to read and track the ball, which she did extremely well.

With the Vixens using Kaylia Stanton and Hannah Mundy together across the line, there wasn’t enough change-up, or light and shade. It might have been worth considering trying Ruby Barkmeyer at wing attack to get some more speed on the centre pass, allowing Kaylia to drop back and do her job closer to the circle.

The Thunderbirds’ defence end structure worked well as a team. Shamera did what was needed at the right times and came up with 11 gains. Matilda Garrett had a strong game, while Latanya Wilson is going to be outstanding for Jamaica with some more experience.

While the Thunderbirds have improved across the season, we are still seeing too many turnovers from their midcourt, including 19 from centre/wing attack in this game. They have two challenges with this – some of those errors are coming about through tiredness and fatigue, so there is room for growth in their conditioning. The other issue is that through sharing those centre court positions around, the athletes are only getting half a game. They really need whole games to get top level practice at safely delivering the ball, even when they are tired.

The Vixens’ defensive end tended to be reactive, following their players around court. They dropped back to a two on one against Lenize Potgeiter for a while, which was good, but it still required the same urgency as a one on one defence. Simone McKinnis asked them for that effort, but they just couldn’t sustain it.

That is an issue for many teams – a box defence needs to be viewed as a change up of tactics to create a turnover, because working the ground takes a lot of energy.  It has to be done for four seconds for every pass, rather than just for one or two seconds, which is the error the Vixens fell into. 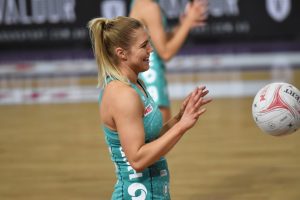 Georgie Horjus was a well deserved MVP, and weaved her magic as she ran her opponent, Jo Weston, around the court. Both Jo and Emily Mannix got stuck on the ground. Whether it’s against a moving player like Georgie, or a holding player like Lenize, a defender has to be able to move their feet with more agility. If their stance is too wide, they can’t change direction quickly enough.

Unfortunately Jo Weston does get noticed by the umpire, because her movements are a little bit stiff out on court. Working on keeping her feet moving, and getting her feet back on defence before she puts her arms up, would keep the attention away from her.

I loved Kate Moloney’s heart and desire, which could have waned across a difficult season, but hasn’t. She is still maintaining her own high standards, and is such a great team person – I applaud her for remaining so positive and encouraging. Her leadership elevates her game to a whole new level, and being able to play three midcourt positions at an elite level makes her very valuable.

We’ve also seen real growth from Hannah Mundy this season. When she takes the front space, with that beautiful cut and drive, she’s almost unstoppable. She’s looking tired at this end of the season, which is understandable for a young player. To progress her game, she will need to continue to work on developing a few more of the tricks that an elite wing attack has, such as passing with either hand, or her defensive skills.

Losing two world class shooters was going to be difficult for the Vixens this season, and it was always going to be challenging without having Liz at wing attack to control that end. Unfortunately we’ve seen the Vixens struggle in the goal attack position as a result.

Kaylia Stanton is predominantly a goal shooter. For her to take the next step at goal attack she needs more work on her conditioning to play a full and consistent game there. Ruby Barkmeyer has that level of conditioning, but lacks experience at an elite level. That’s the risk and reward of putting in a young player when you don’t know what you are going to get, but with more consistent court time I think we will see better performances from her.

I would have liked to have seen more of Allie Smith at wing defence or goal defence, as she is a good player in those two positions, rather than as a replacement centre. It is a lot to expect an incoming player to learn a new position during the season. It takes years of practice landing on the circle edge and feeding a ball in, and that’s not easy to develop in a short period of time.

In the Thunderbirds midcourt, Maisie Nankivell and Elle McDonald both are very creative players with some beautiful skills. They read the game well, and know how to pass and create the space for their goalers. At this stage they both have some room for improvement with their conditioning.

One thing that is underestimated for young athletes is the value of playing alongside older women, who understand the craft of the game. We can really see that in Elle, who was brought up in country Victoria, and has developed a good understanding and decision making abilities through playing in teams with a range of age groups. 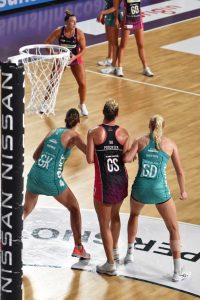 According to Lisa Alexander, such a wide stance by defenders makes it too difficult to change direction and keep feet moving quickly. Image Marcela Massey

The Thunderbirds attacking end really controlled the play. I think it could have been worth switching Kate Eddy into goal defence. She hasn’t had the same impact at wing defence lately that we’ve come to expect of her, and I think she would have been a better match up against the speed and creativity of Georgie Horjus.

Jo Weston was heavily strapped, which indicates an injury that might have impacted her game. But with Eddy in the defensive circle, I would have tried Jo at wing defence to really put some hands-over pressure against the beautiful passes going into the circle, or given Allie Smith a run there.

Vixens were able to score from just 29% of their turnovers, so it could have been worth trialling Ruby at wing attack to see what her speed could do, and keeping Kate at centre where she is so effective. 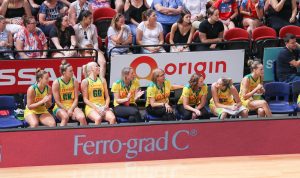 Lisa Alexander on the coaching bench for the Diamonds. Image: May Bailey