Having focused on the Vixens last week, Lisa has given her views on the Firebirds in Round 14.

Winning this game with three of their team missing through injury, Queensland Firebirds showed us a pointer to their future. It was a brave effort, that gave people hope of what they can achieve.

The Firebirds had two rookies (at this level) on court at any one time, and you didn’t even notice they were together for the first time. That came from the belief and thorough preparation by their coaches. The defence end in particular hummed along nicely and they played like a team.

It would have been particularly difficult for Kim Jenner, with new players either side of her, and Clare Ferguson would have told her to focus on her own job, do it well, and not try to take over. 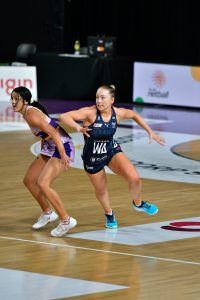 Hulita VeVe, one of a number of rookies on court, is highly rated by Lisa Alexander. Image, Simon Leonard

It’s difficult when you know your team can’t make finals, but you must set some targets and know what you want your team to achieve. Megan Anderson and Clare Ferguson executed that extremely well.

It was a good move to bring Ruby Bakewell-Doran on court. Mwai Kumwenda had been a tough match up for an inexperienced player like Rudi Ellis, because she’s so unpredictable, very quick, and uses the area around the post enormously creatively. Rudi ended up chasing her around and started picking up a few too many penalties.

We saw Ruby take some beautiful intercepts across the circle which reminded me of the work that Laura Geitz and Clare Ferguson used to do together. Geitzy would go out and pressure the ball, and Clare would pick up cross-circle intercepts.

So the team work that Kim Jenner and Ruby put together was impressive, although Kim’s drive down court in attack was slightly missed. Using the split circle also helped the Firebirds decrease their penalties, and as they were picking up turnovers, it was effective.

The Vixens were fairly close to picking up the win, but unfortunately a few offensive contacts was one of the differences between the two teams. Vixens had to score off their centre passes and gains, but they threw the ball away at a few crucial moments. The wind up pass that Jo Weston uses was beautifully read by Ruby, and she and Kim Jenner picked up a few of them.

We did see the Vixens fall off the pace towards the end of the last three quarters, and that’s lack of court practice. Their trainings are generally spot on in terms of intensity, and are well tracked and monitored. They have a fabulous high performance system at the Victorian Institute of Sport, and unfortunately haven’t had that this year due to Covid. You need to travel with your strength and conditioning coach, or your exercise physiologist, because they need to see their athletes perform to know where and what to improve on. 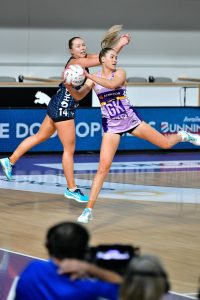 Kim Jenner has been playing a strong team game this year, which has helped the athletes around her. Image Simon Leonard.

I’ve always been a fan of Hulita VeVe – her ability to cover her opponent, her attacking play down court. Hulita is so light on her feet, and I believe she can be a very special player.

Kim Jenner has perhaps been a little quieter in terms of individual gains, but from a team perspective I think she’s done a better job. She’s created more opportunities for her goal keeper, particularly Tara Hinchliffe who was having a break out year before she was injured.

Kim does need to get the balance of her penalties right – the amount of whistle she’s attracting particularly under international umpires. She and her coaches need to weigh up whether she’s playing at the intensity needed to create turnovers, or whether it’s at the expense of being out of play too often. Penalties outside the circle are better, but you can’t afford to give away free shots at goal, so in that case she does need to get off the body and defend a little bit differently.

When transitioning into attack, she also has to be mindful of not turning the ball over. This will be one of the key differences for which ever goal defences make it into the Australian team – they must be great attackers. Michelle den Dekker was a good example of this.

The Kim Ravaillion – Kate Moloney match up was an interesting one, and I think Rav probably took the points. Both players hung onto each other in contact situations, but Kate did it a bit more. She needs to work the ground to cover her opponent instead. Looking at the Diamonds, Kate can cover three positions, but can she do it at world class level against the Silver Ferns? That is something the selectors will consider when they make their final midcourt selections. I’d have both of them in the team.

Gretel Bueta is looking good – she’s getting back into touch, has reduced her error count, and she’s doing some really good defensive work. At times we’ve seen her look a little tired, which is understandable. Gretel is someone that has to be used carefully, because she is so active that she grinds herself down. Good coaches understand she needs time for rest and recovery, or to take her off for a quarter, then put her back out and let her explode into action again.

This was Lara Dunkley’s best game for the year, and I’d describe her as a solid player. She does her job and provides a great contrast to Gretel. As a result the Firebirds are always able to go forwards on their centre passes. Her second phase work is also good. At the start of the match she was well covered by Kate Eddy, who took quite a physical approach against her, but Lara got away from her as the match went on. 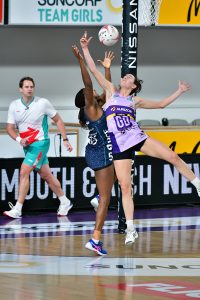 Both teams had a number of rookies on court. Does a coach change their messaging to those players?

A good coach will simplify things, give them lots of confidence in what they are doing, making the instructions really clear and asking them to repeat them back. They also need to be given a voice in their unit. However, the expectations are still the same as those of any player. When Kim Jenner came into a Diamonds’ camp as an invitee, I still had high expectations that I wanted her to meet.  That prepares them for success, rather than failure, and as a coach you need to make sure you are assisting and supporting them to be successful.

It’s why I prefer not to use benchmarks in strength and conditioning – if you give a benchmark, everyone just works towards that. To me, that can lead to mediocrity. Yes, you need a starting point, but at the high performance level, each year I’d say, “Who’s the best player in that position and what are their strength and conditioning markers, because that’s what you’ve got to meet.”

Have your thoughts on the super shot changed?

No – the whole premise of the super shot was to get more long shooting and it just doesn’t work. In years gone by, coaches would give shooters permission to go to the post from anywhere, and I think that has changed.

Unfortunately a number of the shooters now are making the wrong choice of shot selection. You don’t take a two point shot at the top of the circle, because if it misses, it goes out over the baseline. All your long shots, like basketball, should be from the side so you can attempt to rebound them and remain in play.

How does Firebirds head coach Megan Anderson reflect on her first season as head coach?

I think she’s done a great job for her first year, because it hasn’t been easy. She’s had a strong team that probably should have played finals, and a lot of expectations. However, she also had to manage a number of injuries, and athletes that have been away from the game for a couple of seasons.

To set herself up for next year, she needs to thoroughly, and even perhaps ruthlessly, review every aspect of her whole programme, and see where improvements can be made. 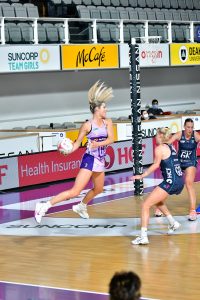 Gretel Bueta has worked her way back into form just months after having her son. Image Simon Leonard.