Fever lost their last match against the Lightning, and really learned from the game. Their centre court was beaten in that game, whereas in this game they turned the tables on Lightning. They showed a lot of discipline and mental toughness to work on those previous issues and put their learnings into practice consistently across court.

Fever’s defensive pressure all over court was outstanding, and the midcourt was excellent.  It was led by a fabulous performance from Verity Charles, who used her skill, ability and positivity to influence the match. Her rhythm and movement was wonderful to watch. 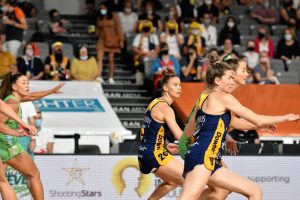 Lightning made Fever’s centre pass difficult, with Stacey Francis-Bayman and Sunday Aryang an outlet for 33% of the passes. Image Marcela Massey

One of the strongest aspects to Lightning’s game was their shooter to shooter connection. There isn’t one simple answer that can unravel it. A team has to do a lot of homework to see if there are any movement patterns that stand out, then try and separate them and make it more difficult for them to find each other. One of the most challenging combinations the Diamonds had to play against was Maria Tutaia and Cat Latu, as they were then. We never knew what we would get from them other than a great combination that was difficult to counteract.

Marking a combination is hard for a young player like Sunday Aryang who is just stepping up to this level. She has a lot of great initiative and ability to read and impact the play, but to fine tune her partnership with Courtney Bruce will take time and effort. However she will continue to improve in this area.

Lightning challenged Fever’s first phase from centre pass, and as a result Fever took a while to find their rhythm. Getting a quick connection and pass to Jhaniele Fowler is how they win, and that’s what Lightning tried to take away.

However, the Fever midcourt were outstanding in this match, and Lightning’s through court defence was lacking. Lightning could not break the connection between Fowler and Charles, who finished with 48 feeds.

People don’t understand how very difficult it is for midcourters to move from one position to another, whether it’s within a game, or within a season. The movement patterns between the three positions are completely different, with wing attack the prime attacking role. Athletes these days are so fit and fast, but it does require great skill to adjust to different positions quickly.

We see some athletes do it very well – Charles is an example, as is Laura Scherian between centre and wing attack, while Ash Brazill’s last game for the Diamonds, where she moved from wing defence to centre, was one of the best I’ve seen her play.

Mahalia Cassidy lacked discipline, and with a round high eight turnovers plus 14 penalties, needed to adjust. She couldn’t outrun her centre, and didn’t put in the footwork to get around her. Mahalia did reduce her errors as the game went on, but it was a case of too little, too late unfortunately. It’s a fine art balancing the midcourt so that they are impacting play, but then changing it up once they tire. As a coach, making that change is one that can win or lose games.

I was surprised that the Lightning defenders double-teamed Fowler so often. It’s particularly an issue with Karla Pretorius, because she has an incredible ability to impact the ball around court which is greatly reduced when she drops back into the circle.

It’s quite a reactive form of planning for defence, and I think Lightning would have been better placed increasing the pressure throughout the midcourt and attacking the ball. Unfortunately their through court defence wasn’t as effective as it should have been, in part because Wood struggled in transition following her recent injuries.

While we are used to seeing Alice Teague-Neeld and Sasha Glasgow interchange during matches, we did see a couple of new strategies in Fever’s attacking end. The first was their use of the super shot early in the game, to take a lead and make the Lightning go into chase mode.

The other was Jhaniele Fowler’s movement out of the circle, perfectly timed for use at this point of the season. While many people think she’s purely a post-up shooter, she’s actually very athletic and moves beautifully. By changing up her patterns and positioning, she created space in and around the circle, for her attackers to drive into, and left the defenders unsure whether to continue marking her together, or to chase the goal attack. It made Fever’s shooters much harder to match up on, and will certainly give the GIANTS something to think about next week.

Interchanging Alice and Sasha was a smart decision.  It is a risk, because Sasha doesn’t defend quite as well as Alice, or set up play in the same way, but with the speed of Charles it didn’t matter. What Sasha did extremely well was turn and shoot which put doubt in the mind of defenders. She made them pay when they were double-teaming Fowler. 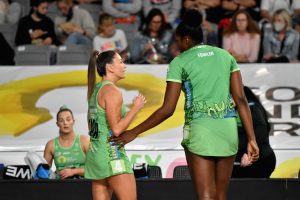 The connection between Jhaniele Fowler and Verity Charles couldn’t be broken during the game. Image Marcela Massey

Verity Charles’ first phase work was excellent. She was creating movement on both sides of the court, which was good to see as she usually prefers the right hand side. There was so much to like about her game – her flow, vision, speed, accuracy, pinpoint passing. Her defensive work and pressure was also outstanding, along with the mental toughness she showed to maintain it for a full 60 minutes. She was extraordinary, with 48 feeds, 16 centre pass receives and 3 pickups.

Jess Anstiss played the perfect game to allow Verity to shine. It showed how well she understood their combination and how it worked. Anstiss showed great awareness of time and space, and knowing where she had to imprint herself. It’s the hardest thing for centres to learn, and it was the best I’ve seen her done it. Anstiss finished with five pick ups, two intercepts, and 31 feeds.

Steph Wood is one of the smartest players in netball. She’s enormously creative as a goal attack,  drawing defenders into a space and playing with them. The issue for Steph is being able to maintain the same level of performance across 60 minutes, and she couldn’t quite manage it in this game.

I believe Laura Scherian is one of the most underrated players in netball. She’s a beautiful feeder of the ball and is smart – she can read the plays three plays ahead. That isn’t easy to do at wing attack, and she fits in the spaces beautifully and allows the players around her to do the work. That was important in this match because Mahalia was off the mark. Laura had 41 feeds and 30 centre pass receives across the game.

It was also another smart game from Cara Koenen, although the only issue is she was back there waiting for the ball. She did miss some costly shots, shooting 33/39, which you can’t afford at this level or in close games. 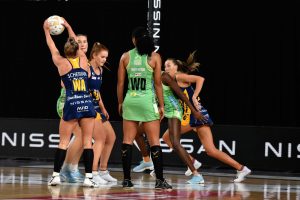 One thing that could have changed

I’m not sure why the Lightning didn’t run the team that beat Fever last time, with Maddy McAuliffe starting at centre, and Mahalia Cassidy at wing defence.

Having McAuliffe at centre with her longer arm span was effective last time, while Cassidy is perhaps a better match up for the speed of Charles. 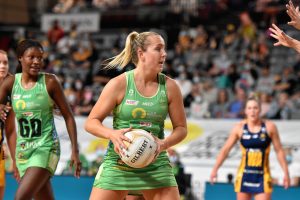 Jess Anstiss worked well around Verity Charles, knowing where the spaces were and when to fill them. Image Marcela Massey