The intensity of the match was worthy of a final, and we need to pay respect to the GIANTS. They had a game plan, executed it perfectly and completely took away Fever’s strengths – it was a tactical masterclass from Julie Fitzgerald and her team.

Julie has done an exceptional job of developing her young players. She’s been coaching for a long time, and she’s such a good people manager. However, at Diamonds’ level, the Sisters in Arms culture meant that even prior to the first camp of the season, the team leaders would have been on the phone to the newbies making them feel welcome, and taking up the responsibility of helping them to have the best debut possible. So helping young players to feel comfortable in their environment is everyone’s responsibility, and I’m sure that the GIANTS would all understand this.

The challenge of finals are 80% mental and 20% physical, and unfortunately for the Fever, they didn’t meet the mental challenge in this game. They’ve looked flat for a few weeks now. We saw the warning signs in their Round 14 loss against the GIANTS – the last game before finals is difficult for any team as it’s a psychological challenge. 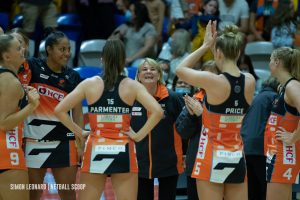 There was a sense of calmness about the GIANTS. It was one of the most mature games that I’ve ever seen Jamie-Lee Price play – she was so calm, and nothing hassled her. The GIANTS knew that this game would be won by the battle of the centre court, and while the bookends did their jobs, the middies had to deliver and they knew it.

That started through outstanding defence of Fever’s centre pass and second phase. GIANTS made every pass difficult and really put the work into isolating Verity Charles. Sometimes Amy Parmenter was near the line of being pulled up for being overzealous, but Verity got caught up in that intensity. She struggled to find space, and that frustrated her because she couldn’t get her normal link to Jhaniele Fowler flowing.

But when the first quarter was so hot, Verity’s role was made far more difficult by two things. The first was Jhaniele coming out of the circle so much. With no target under the post, Verity had to slow her game down waiting for the shooters to be available, or pass laterally, which isn’t Fever’s usual style. It gave the GIANTS’ defenders more time to apply hands over pressure or position themselves in the circle.

Alice Teague-Neeld also needed to do more work as a feeder to take the pressure off Verity. That’s a crucial role when the wing attack is being double teamed – the goal attack has to stand up, in the manner that Nat Medhurst used to do so well.

Alice did take the majority of the centre passes in the first quarter, but Verity finished that period with 10 feeds to Alice’s four. Perhaps more of the centre passes should have gone backwards to the defenders, allowing both the wing attack and goal attack to be options on the second phase. Alice was much better in the final quarter, really lifting her intensity and delivering the two point shots when it mattered.

Sam Poolman appeared to me to play Jhaniele just right. Sam had enough intensity and vigour to get underneath Jhaniele’s skin, without being penalised. Jhaniele certainly wasn’t herself – all she had to do was deliver her usual performance under the post. We know she can do it, and the week before against one of the best international defence ends in the business (Karla Pretorius and Phumza Maweni) she did it while being double-teamed.

But whether or not there was something else going on with Jhaniele that we weren’t aware of, she was nullified to the point where it didn’t matter how well her goal attack played. You need both goalers delivering a strong performance in a final – if one is off, your team will struggle to win.

Jhaniele lost her appetite for the game and then lacked her usual discipline getting into defence quickly when the ball was turned over, and she’s usually very good with that. She had nine penalties for the game – the second highest on court – and that not only gave Sam a free pass, but had a concertina effect on Fever’s entire down court team defence. 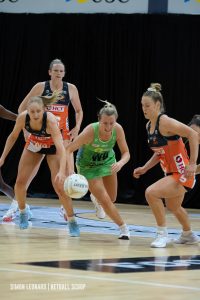 Like the semi-final against the Swifts, Maddie Hay was costly in the first quarter for the GIANTS. Three of her six turnovers came during this period. They were mainly passing errors – a two handed pass that’s flat enough for the defender to pick off. It’s hard to appreciate just how skilful centre courters have to be with their passing, and while Maddie is serviceable and has done what the GIANTS need of her really well, she’s not yet a top attacking player in this respect.

However, we need to remember that she’s only been playing wing attack for little more than a season. I’m sure that Kim Green has been of enormous support to her, and given her advice, and she should continue to improve given time and experience. One of Maddie’s other strengths is to defend extremely well down court – she transitions from attack into defence really quickly.

The combination between Jo Harten and Sophie Dwyer has built all year and was spectacular to watch in this game. It’s highly skilful, and is based on beautiful shooting from anywhere in the circle. Jo is playing physically and mentally well – in this game she walked the perfect line of being fired up, but not over the bell curve and too emotional to be effective. When she can maintain this level of composure, she’s very much a team player.

Like Gretel Bueta, I believe that Sophie is very under-noticed for the work she does outside the circle. In this game her courtcraft was stunning – very reliable, very smart and she knows where to move and how to fit in around the rest of the team. She’s very much a team player. Sophie finished with 19 centre pass receives and 17 feeds. She did tire in the fourth quarter, giving away three of her four turnovers, but that level of conditioning will come with time.

She had the better of Sunday Aryang in this game, which is understandable. It takes so much longer for young defenders to develop their skills than shooters, because they have to react to play, whereas shooters can initiate it. So defenders have to be enormously resilient, and take far more from their decision making and learning from one game into the next.

It was similar for Julie Corletto as a young player – it took her a few years to learn to read the play, and like most defenders she grew into her full capabilities as she matured. Sunday will continue to grow, but people need to be patient with her.

In this game, I think Fever needed a more experienced defender against Sophie. It was a good move to shift Stacey Francis-Bayman onto her, and I probably would have done it earlier in the game.

Courtney Bruce was underwhelming. This is the sort of game she needed to stamp her authority on, rather than being caught out of play. So she needed to change up her tactics, by getting her feet moving, and changing her angles so that she was in control of the space in the circle. She got caught chasing her player or the ball a lot, and didn’t quite seem to have her head in the game. Once Courtney turns her back to the ball, and defends the player, she’s lost confidence.

For Fever, Alice Teague-Neeld really stepped up her game in the last quarter, while I thought Verity Charles and Jess Anstiss also battled hard. Jess was solid without being spectacular, but she works hard, she gave everything and she’s a great team person. 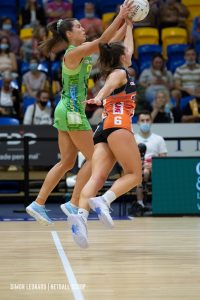 A change that could have altered the game

With Jhaniele unable to follow Fever’s game plan, I would have considered sending her to the bench for five minutes. It would have been a risk, as she could have either regrouped, or completely shut down emotionally, and in the end it wasn’t one that the team was prepared to take.

I think that the players also have to face up to the loss, look themselves in the mirror and realise who is to blame for their disappointing performance. If they don’t, if they blame the coach or other factors such as being tired or mentally drained, they won’t learn anything from the season.

I believe they have the ability to come back and win the grand final next year after the strong performances we saw from them. And we all need to accept that because the penalty is gone. It’s finished.

It’s going to be close – a battle of two very different styles. The GIANTS long range shooting game which netball purists love, versus the highly possessive game of the Swifts. In my opinion it will be won or lost in defence – the team which can defend the best across 60 minutes will win the game. I believe the Swifts have the edge in that respect, although there are still some concerns over their wing defence option.

All the players need to be in front of their opponent and be ready for anything. The law of averages says that if a loose ball comes out, the player in front will get it.

Both defensive circles need to beat their direct opponent, but also work as a team and make their opponents uncomfortable. We’ve seen Sam Poolman do it to both Sam Wallace and Jhaniele Fowler now, while Sarah Klau and Maddy Turner can also do it beautifully too. 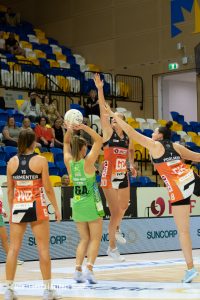 In Alexander’s opinion, defence will win the grand final. GIANTS defenders April Brandley and Sam Poolman making it difficult for Alice Teague-Neeld to get the shot away. Image Simon Leonard