The match was like a chess game, and at half time the score was level on 29 goals apiece. It was fascinating to see what coaches Briony Akle and Julie Fitzgerald were going to pull out of their toolbox in the second half, whether it was going to the bench, changing their tactics, or a combination of both.

While a coach should never be afraid to go to the bench, the Swifts made 9 positional changes during the third quarter and I don’t believe it worked for them. They were good for most of the game, but unfortunately they lost that quarter by five goals as a result of 7 turnovers and 15 penalties, compared to a tidy quarter by the GIANTS. Against the top teams, you need consistency across all four quarters.

I also wonder if it was a coincidence that Maddy Proud, Maddy Turner and Sarah Klau were down on form during the match – all three are South Australians and they would have trained on that court since they were teenagers. 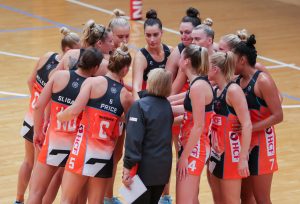 The GIANTS hit the top of the ladder with their win over the NSW Swifts. Image May Bailey

The GIANTS played a very controlled game – clearly that was a theme for them coming up against the Swifts who usually have that approach. It was particularly noticeable in the midcourt – Amy Parmenter, Jamie-Lee Price and Maddy Hay worked really hard as a unit to get the ball safely through the midcourt to their shooters.

I didn’t see them put in any ill-disciplined passes, although at times I was calling at the TV for Jamie-Lee to let the ball go. She still has a little way to go with her passes over the top of the circle, particularly when they are setting up a triangular play.

The Swifts were interesting in comparison. They usually play a short passing game, but in this case I thought they were trying to get the ball down to Sam Wallace quickly, perhaps to give the GIANTS less time to set up their defence. There were a number of long balls into the pockets, which unfortunately led to some turnovers or allowed the GIANTS defence an opportunity to disrupt the play.

Sam Poolman had a particularly strong game as a result – she had 8 gains, and Sam Wallace looked frazzled at times. Shooting at 39/48 is less accurate than what we’ve come to expect from her. A number of times we saw Wallace drive away from Poolman and out the top of the circle. She chose the right times, and did it well, but the GIANTS’ defence were then able to isolate her there. As a result some of the balls she put into Helen Housby were difficult, which gave the GIANTS a better chance of picking them off.

Paige Hadley (30 feeds, 21 centre pass receives, 5 pick ups, 0 turnovers) had an outstanding game. Playing across three positions makes her so valuable to the Swifts, but unfortunately shifting her out of attack to wing defence is the equivalent of robbing Peter to pay Paul.

Hadley is playing beautifully as a wing attack, putting in great balls to the circle, while her defensive skills are world class for an attacking player. I love her competitive drive. She is such a team player – prepared to go in any position, gets straight into it and doesn’t need time to settle into the game and make an impact.

I love Jamie-Lee Price’s strength as a player. However, when she is playing centre she has a tendency to put through some balls that aren’t there. She’s getting better, but I’m not certain she has the experience or flair of Kim Ravaillion or Paige Hadley as yet.

I would include her in the Diamonds’ team as a wing defence that can also play centre, but the problem is that she’s not getting a lot of court time there at a domestic level. When you’re picking the Australian team it’s not just about what you are seeing out on court, it’s also athlete’s form, previous form and international experience, all mixed together, to come out with the best 12.

This is a significant issue for Sophie Garbin at the moment. She’s not getting a lot of court time, and it will make it hard for the Diamonds’ selectors to pick her. Sophie needs to be playing week in, week out, to really press her case for selection.

Jo Harten had a terrific game as well – she was up and about, talking to her teammates, following the game plan and leading the group really well. She controlled that whole attacking end, and she and Sophie Dwyer really lowered the colours of the Swifts’ defence.

Harten has had a couple of quieter weeks prior to this game. How does a coach help an athlete work through that?

You address it by being honest and upfront, and that’s what the athlete’s want – they don’t want your thoughts sugarcoated.

Sometimes it’s a balance – athletes, and particularly young ones, are so hard on themselves that it’s counterproductive, and they become focused on any weak points rather than their strengths. Julie knows Jo so well, and she would know exactly what to say to her.

When you are working with a shooter, it’s often about taking the pressure off them individually, giving them clear instructions about how to contribute to the team, and then letting them take control of the attack end. If they are focused on the team, they will spend less time worrying about their own game. This is something that Eloise Southby used to do well when I coached her – to be able to turn her mind to what the team needed from her during the game. 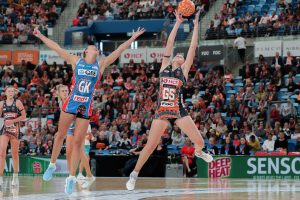 Jo Harten at full stretch, during Indigenous Round earlier in 2021. Image May Bailey

Lisa Alexander cast her eye over a few of the GIANTS athletes who are pushing for national squad or team selection, assessing what they’re doing well, and an area for improvement.

I’m enjoying what Julie Fitzgerald is doing with her young athletes – they can be a challenge to coach as they are very hard on themselves. With maturity and experience they learn that they don’t have to get caught up in their own games. They need to think about what it is they are doing for the team, and once they are worrying less about their own performance, they usually end up making a stronger impact.

Maddie is the unsung wing attack of the competition at the moment. She is so efficient at what she is doing – playing with the efficiency of a Kim Green without the same level of experience, which is quite amazing. She’s a very tidy player – just takes the ball and puts it into the right space for her shooters.

Her defence in transition is sensational and very important for the GIANTS game plan to build pressure down court. It’s an underrated skill for a wing attack, and her work stopping her opponent being as effective is an outstanding feature of her game.

If I had to choose an area of improvement, it would be continuing to develop a traditional wing attack game. Maddie is a wing defence by trade, and hasn’t quite mastered the rapid pass and cut approach yet. She will be more powerful, particularly on the first phase of centre pass, when she does. Her ballwork is effective but her throwing action is a little unusual, so coaches will be encouraging her to use left and right hands. At the moment she tends to put the safe pass through to her shooters, but if she can work from both hands, she will be the dominant feeder making the play into the circle.

Sophie wouldn’t have been expecting to play out full games this year, until Kiera Austin’s unfortunate injury. She’s been so impressive – a very mature player considering her level of experience. I like her calmness, and what is generally a low error count. She’s got a really good understanding of doing what the team needs from her, and sticking to their game plan.

She fulfils her role, she defends hard and just goes about her game with a minimum of fuss.

I understand that the GIANTS are looking at working the ball closer to the post, but I think she has the ability to take the shots rather than pass off at times. She is a beautiful shooter, and if she is an option from anywhere in the circle, it really stretches the opposition defence. It becomes more difficult for them to work as a unit, and can break down their combination.

Amy is a relentless player who is very disciplined in her approach to the game plan. Her closing speed in defence is terrific, and she’s cleaned up her penalties, while in attack she is a reliable and safe ball handler. The contest between her and Paige Hadley was terrific to watch during this game, and I believe she will force her way into the Diamonds’ squad. 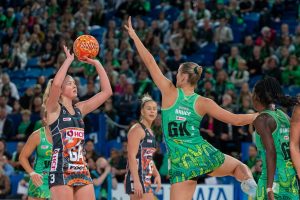 Sophie Dwyer has been one of the GIANTS impressive young rookies, with a maturity beyond her playing experience. Image Clinton Bradbury

WHAT COULD A COACH HAVE DONE DIFFERENTLY TO CHANGE THE COURSE OF THE MATCH?

The Swifts really needed to change back to their short, sharp possession game.

In attack, Sam Wallace was a little bit down, and Sam Poolman had the better of her. I would have considered trying Sophie Garbin back there instead of at goal attack, as she is very strong on the hold and under the post.

Wing defence continues to be an issue for the Swifts, and I believe they need to settle on an option, and make it work. The lack of consistency in that position contributed to Sarah Klau and Maddy Turner not playing as well together as a combination, which they usually do very competently.

Athletes are far more effective and stronger as a unit than they are individually. When that does break down, you need to go back to lots of court work. You practice it again, and again, and again. You throw challenges at them, add more players against them, and work them really hard until the combination is working again. Confidence playing together comes from time spent on the training track.